A wounded woman is evacuated after a massive explosion in Beirut Tuesday. AP Photo/Hassan Ammar

Tom Atema was working remotely in the United States rather than from his office in Beirut, Lebanon, when news of Tuesday’s blast reached him. The head of Heart for Lebanon—a Christian nongovernmental organization that’s worked with churches in the capital city and with Syrian refugees stranded in Bekaa Valley—sent local teams into the downtown area right away to assess the damage and ways they could serve.

What they saw: Bloodied victims looking for help, windows in every downtown building blown out by the early evening blast, and so much rubble they couldn’t cross some streets.

The massive explosion, which rocked central Beirut with what looked like a mushroom cloud at 6:08 p.m. local time, damaged homes up to 6 miles away. People felt the shockwaves in Cyprus, 145 miles across the Mediterranean.

The explosion began with billowing smoke, suggesting a massive fire at the city’s central port. It ricocheted into a blinding rush of orange debris: An eruption of what officials believed was ammonium nitrate unfurled over the city like an apocalyptic umbrella. Hours later, Lebanon’s health minister reported at least 70 killed and more than 4,000 people injured.

Local journalists captured scenes of residents trapped beneath rubble and the city descending into evening darkness with no power.

The blast particularly damaged East Beirut’s Christian neighborhoods. In the Ashrafieh district, where Atema’s offices are located, all windows had blown-out glass and damage, he said. That included his own offices (where no one was hurt), and the large evangelical Resurrection Church and Nazarene Church. Headquarters for Youth For Christ in the neighborhood also suffered damage but were not destroyed. 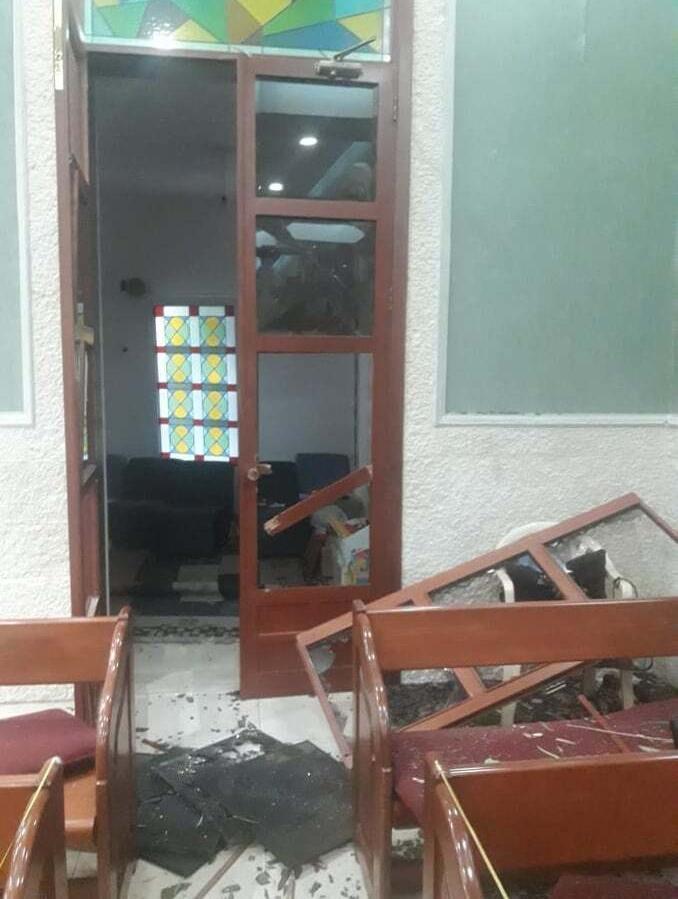 Damage inside the Church of God in Ashrafieh in Beirut. Courtesy Joy Mallouh

At the Church of God in Ashrafieh, senior pastor Joy Mallouh said, “We are all safe, but have a lot of damage in the church buildings and members’ houses.” Photos he provided showed blown-out windows, torn curtains, busted doors, and debris.

A priest conducting Mass at a nearby Catholic church was caught on camera during the blast during a service livestreamed due to pandemic lockdowns. He survived, rushing for cover as the church’s stained-glass windows came crashing down.

“It’s Hiroshima,” said Mother Agnes-Mariam St. Croix, who was downtown to help with casualties shortly after the blast. She talked to me while she stood outside St. Joseph’s Hospital, one of the medical facilities nearest the port. She saw hundreds wounded and dead as victims lay bloodied on gurneys outside awaiting treatment. Mother Agnes heads the Melkite Catholic Monastery of St. James the Mutilated in Syria, but was born in Lebanon and has been working there during the pandemic.

Most significantly, the blast destroyed the country’s grain silos, where all its supply of wheat—in a country known for its bread culture—was warehoused.

The massive loss comes as Beirut weathers unprecedented street protests and unrest accompanying an economic collapse. Prices of food and consumer goods have soared this summer—the result of decades of weakened government, heightened tension over the increased political platform of Hezbollah, mismanagement, corruption, and overspending. 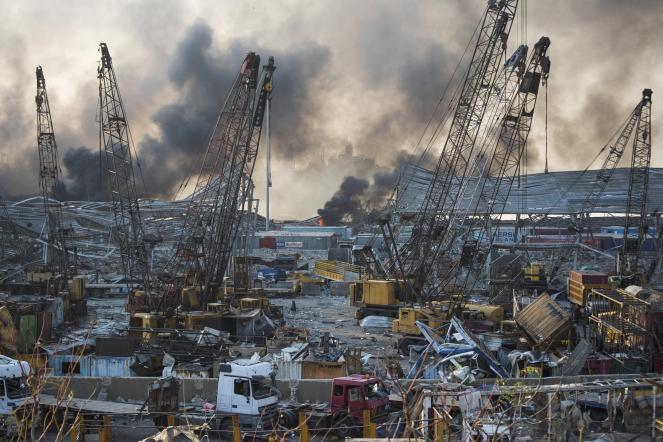 Smoke rises in the aftermath of a massive explosion in Beirut. AP Photo/Hassan Ammar

Once known as a rock of stability and religious diversity amid a sea of Middle East turmoil, Lebanon’s unraveling already means 1 million out of 5 million people are malnourished and need food assistance, half of them children.

Lebanese President Michel Aoun blamed the explosion on 2,750 metric tons of ammonium nitrate stored in a warehouse for six years without safety measures. He said those responsible for the lapse would face the “harshest punishments.”

At the White House, President Donald Trump said generals he had met with after the explosion “seemed to feel” it was “an attack,” “a bomb of some kind.” Such attacks in Beirut aren’t unheard of: The worst terror attack against the United States before 9/11 took place at the Marine barracks in Beirut, a truck bombing that killed 241 U.S. military personnel in 1983.

In 2005 a bombing in downtown Beirut killed Prime Minister Rafik Hariri, sending the country into political upheaval it has yet to recover from. Many blamed the assassination on Hezbollah, and a special United Nations tribunal meeting at The Hague could deliver a verdict this Friday on four Hezbollah-linked suspects.

Atema plans to shift his ministry’s work—which specializes in family care, education, and faith-based programs for Syrian refugees—to also care for the city’s hurting following the blast. “It is bad, but we live in unprecedented, troubling times that give us unprecedented opportunities to share the gospel and make disciples.”

Mindy wrote WORLD Magazine’s first cover story in 1986 and went on to serve as international editor, editor, and now senior editor. She has covered wars in Syria, Afghanistan, Africa, and the Balkans, and she recounts some of her experiences in They Say We Are Infidels: On the Run From ISIS With Persecuted Christians in the Middle East. Mindy resides with her husband, Nat, in Asheville, N.C.