Former UN Ambassador Nikki Haley walks a political tightrope in With All Due Respect (St. Martin’s, 2019). She writes of her relationship with Trump, “We didn’t always see eye-to-eye. Sometimes I called to privately express my disagreement with a policy. But he always took the call and he always listened. Usually, as in the case of the Iran deal, we agreed.”

Haley (and writing helper Jessica Gavora, named in the acknowledgments) convincingly explains her reaction as South Carolina governor to the 2015 Charleston church murders and the presence of a Confederate flag on the capitol grounds. She shows how Al Sharpton scored cheap political points but Jesse Jackson “chose to listen rather than scream.” She opposes racist cops and says intimidating local police hurts African Americans: “Black lives do matter. And they have been disgracefully jeopardized by the movement that has laid waste to Ferguson and Baltimore.”

Haley describes her battles with former Secretary of State Rex Tillerson: She chastises him and former Chief of Staff John Kelly for disloyalty to Trump and to “the American people who elected him.” Her description of meeting with Salva Kiir, the disappointing president of South Sudan who has presided over “ethnic cleansing, mass rapes, and the deliberate starvation of citizens,” is interesting and important. She describes well Venezuela’s misery and notes, “The same story could be told about other countries that have fallen for the cruel hoax presented by socialist politicians. … Socialism destroys freedom, even in those countries that manage to grow their economies off the sweat of their repressed people.”

Haley also walks the political tightrope on immigration and complains about agreements that “blurred the lines between migrants who choose to leave their countries for economic or family reasons, and refugees whose lives depend on escaping persecution for their race, religion, or other status. But these distinctions are crucial.”

Michael Gerhardt’s Impeachment: What Everyone Needs to Know (Oxford, 2018) succinctly defines the procedure and summarizes its history, extent, and usage not only in Washington but in several states and around the world. He asks why George W. Bush wasn’t impeached for ordering the war against Iraq and why Barack Obama wasn’t for usurping legislative power through executive orders and illegal recess appointments, lying that everyone could keep his doctor and current health plan under the Affordable Care Act, and authorizing fatal drone attacks on and secret surveillance of American citizens.

Gerhardt also shows that many Democrats were calling for impeachment of Donald Trump before gossip about the infamous Ukrainian phone call fell into their laps: They hoped purported Russian collusion, concealment of presidential finances, and obstruction of justice would stick. But Victor Davis Hanson’s The Case for Trump (Basic, 2019) is the best Trump defense I’ve read: Historian Hanson praises the president’s defense of working people in America’s interior and his willingness to stand up against a corrupt old order. 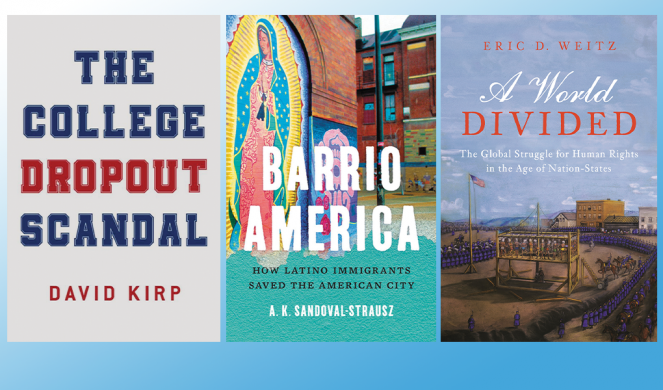 It is scandalous that two-thirds of students who attend public colleges don’t graduate in four years, in part because many who start would be better off learning a skilled trade—but David Kirp’s The College Dropout Scandal (Oxford, 2019) concentrates on another part of the story, the institutional reasons for failure. Throw students into big lecture halls where professors don’t know a Texas admonition—“If you don’t strike oil in 20 minutes, stop boring”—and it’s no surprise that many flounder. Kirp shows a better way: “Socratic teaching, small classes, academic advising, and emotional backstopping.”

A.K. Sandoval-Strausz’s Barrio America (Basic, 2019) shows how Latino immigrants have revitalized many U.S. cities, small towns, and old courthouse squares. They have stemmed or reversed population losses in more than 600 rural counties. Eric Weitz’s A World Divided: The Global Struggle for Human Rights in the Age of Nation-States (Princeton, 2019) is a chapter-by-chapter look at human rights abuses over the years in many countries, including Namibia, Korea, the Soviet Union, and Rwanda.