On the last Saturday of October, residents of Sutherland Springs, Texas, gathered for the annual Old Town Day parade. As in past years, the parade included a fire truck and ambulance, men and women on horseback, and local politicians riding in cars decorated with campaign signs.

Residents who were not in the parade watched from camp chairs along the route. People on the floats greeted spectators by name and tossed candy to them. The “Valentine Court”—little girls in sparkly red gowns and silver tiaras and two little boys in gold and red crowns—rode on the Sacred Heart Catholic School’s float. The small princess occasionally pointed her scepter at her court and demanded, “Silence!”

Those same pipers had played that same song at the funerals last year of the 26 persons who died in the deadliest church shooting in U.S. history. On Nov. 5, 2017, Devin Kelley, wearing tactical gear and armed with a rifle and two handguns, stormed the Sunday morning worship service at the First Baptist Church and mowed down 26 people, including an unborn baby.

For the past year residents of this small Texas town have struggled to recover from their incalculable loss. They’ve coped with a flood of media attention, received outpourings of love and sympathy from around the country, and seen firsthand the ugliness of those who tried to gain from their loss.

Sarah Slavin, who lost nine family members, described how many are coping: “You have to acknowledge the pain and the hurt and even some of the evil, the hate for that matter. It’s okay to acknowledge it, but don’t get stuck there.”

Immediately after the shooting, reporters rushed to Sutherland Springs and the surrounding Wilson County. Media vans flooded the wide street separating First Baptist Church from the Valero gas station. The media attention was intrusive, but it also prompted people from around the country to send money, prayers, and letters of sympathy.

Wilson County residents brought meals and sat with survivors at the hospital. They parked RVs outside the hospital so people could privately receive notice of family members’ deaths. Out-of-town family members came to help. Jenni Holcombe’s parents came to stay with her after her husband, Danny, and their only child—17-month-old daughter Noah—died in the shooting.

Holcombe’s mom stayed with her until Thanksgiving. Afterward Holcombe spent months navigating legal issues and sorting through her husband’s and daughter’s things. Chores her husband used to do required her attention. How to mow the grass. What to do when she saw a scorpion or snake in the yard. Which mechanic to trust with the broken-down car.

She spent a lot of time with her husband’s sister, Sarah Slavin. Slavin had also suffered serious loss: Along with her brother Danny and niece Noah, she lost her parents, a sister-in-law, and four other nieces and nephews in the shooting. She said the church daily felt the loss of nearly half its members: “Everybody who was lost had a lot of things that they took care of, and then they all left at once.” 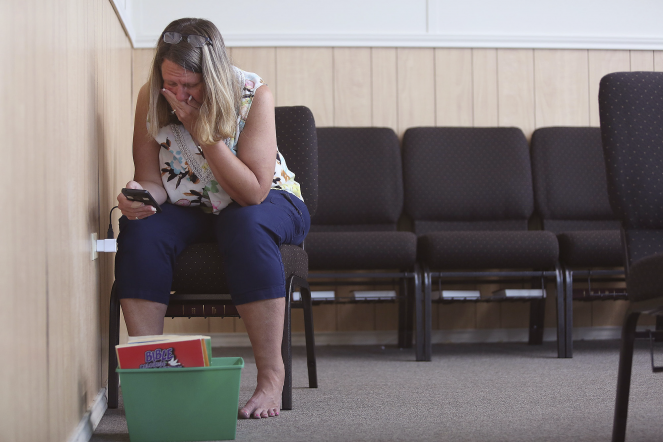 Sherri Pomeroy looks through the phone belonging to her daughter Annabelle for the first time since the shooting. Law enforcement investigators took the phone from the church for their investigation. Lisa Krantz/<em>The San Antonio Express-News</em> via AP

Part of the grieving process came with the first holidays without husband, kids, and dear friends. Slavin’s mother Karla Holcombe always baked “cookie wands” for everyone, so for her birthday Slavin and Jenni Holcombe decided to try her recipe. Something went wrong and the dough stuck. Instead of cookies, Slavin and Holcombe had a cookie dough fight.

Slavin said many of the women who were killed “were the biggest instigators of all our shenanigans and fun stuff.” So she and other survivors decided to come up with new “shenanigans” so everyone would still have fun times.

At Christmas, church members held a scavenger hunt for the kids. A group of bikers, including the pastor, rode their motorcycles to deliver toys to low-income children. One biker was Stephen Willeford, the man who confronted and gave chase to the shooter. With his round belly, white hair and beard, and red Santa hat, Willeford resembled Santa Claus.

After the shooting, Willeford started attending First Baptist rather than his home church in San Antonio, 45 minutes away. He decided he wanted to be counted as one of the survivors. “I lost people I care about, too,” he said. “I’m a survivor.” Since the shooting, he has trained some church members to handle guns. He has also traveled to churches in Dallas, Columbus, San Diego, and Birmingham to educate members on security.

Before the shooting, First Baptist Church of Sutherland Springs had 50 or 60 worshippers on a good Sunday. The shooter murdered 26 of them. Now, average church attendance is about 200. Some of those newcomers are community members who committed to the church to show support. Others are like Julie Rogers, who became a Christian through watching the church respond to the tragedy. She came to the church to encourage her co-worker Kris Workman, the worship leader who was paralyzed in the shooting, and found herself drawn back again and again. On Christmas Eve, she was baptized.

On Oct. 25, about 30 church members gathered in a temporary building for Bible study and supper. They ate chicken and dumplings or tomato soup and cornbread and listened to a speaker. Reminders of the shooting hang on the wall, including a picture of a Texas flag with white script: “Pray for Sutherland Springs.” Nearby hangs a painting of a small white church building with three crosses and a dove above it and the words “Unchangeable Jer 7:2” (“Stand in the gate of the LORD’s house, and proclaim there this word, and say, ‘Hear the word of the LORD …’”).

After the meal and Bible study, the church secretary passed around prayer request pages. The top of the page read, “Pray for the families of our victims.” The people shared requests and things they were thankful for and took turns praying for each other.

Jenni Holcombe was there, as was Stephen Willeford. But not all the survivors returned to the church, and not all who returned are at the same place in their grief. Out the window is a building project for the new church. The small white chapel the shooter attacked is now a memorial: Inside, everything is painted white. Wooden folding chairs with gold names mark where each victim died. A red rose sits on each chair. A pink rose on one chair represents Crystal Holcombe’s unborn baby. 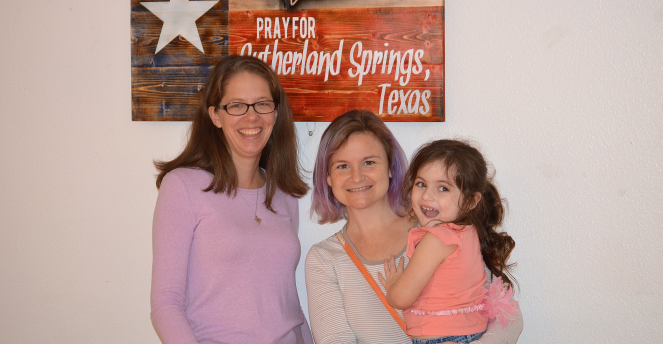 Sherri Pomeroy looks through the phone belonging to her daughter Annabelle for the first time since the shooting. Law enforcement investigators took the phone from the church for their investigation. Lisa Krantz/<em>The San Antonio Express-News</em> via AP

This summer, Jenni Holcombe visited her parents in Washington state for her mom’s birthday. Other than that, she stayed close to her fenced-in house on the 300-acre Holcombe family property. She works part time in the afternoons at the All City Youth Programs in neighboring Floresville and attends multiple Bible studies each week at church. She still grapples to convey what she lost: “I had a 17-month-old. Everything has changed. It’s just me now. Everything was about taking care of her and doing things, and we were always going places because she was a very social person. She didn’t like to be at home. Now it’s just me. It’s hard to just cook dinner for myself, so I don’t do that a lot. Even just going to the grocery store is different now.”

In early 2018 the town was revictimized. While survivors were still dealing with grief, two outsiders came to town, bringing unwanted media attention with them. Robert Ussery and his partner Jodi Mann had a theory that the shooting was a hoax. They set up a website and began announcing a $100,000 reward to anyone who could offer proof that one of the victims was actually dead. Ussery posted videos of himself using a bullhorn to offer this reward to the people of Sutherland Springs. On March 5 police arrested the pair for trespassing and resisting arrest.

Survivors don’t dwell on that episode. Nor are they dwelling on the four lawsuits some of them have filed against the federal government. When the Air Force discharged Devin Kelley in 2014, Air Force personnel failed to enter information about him into the database used for criminal background checks required for firearms purchases.

Sarah Slavin said after a year, the grieving has become easier. But she has not had a chance to develop a new normal. “In my worst moments, when I feel like I’m hanging on by a thread, that thread is Jesus Christ,” she said. “I have felt the whole time like He’s holding me, and any strength, it’s what He’s giving me. … There’s been a lot of support and help and stuff, but when you actually get down to it, no one can get us through this. Only God can do that.”