Worshippers leave Sukovska Baptist Church in Druzhkivka, Ukraine. Services were held in a tent in the back of the church because the building was heavily damaged by a Russian missile strike. Scott Olson/Getty Images

Ukrainian church leader Anatoly Prokopchuk and his 19-year-old son Alexander were working in their garage on a chilly fall evening when Russian soldiers paid them a visit. Then they disappeared.

For several days after their Nov. 22 abduction, family and friends frantically searched for clues regarding their whereabouts and posted messages on social media. Prokopchuk, 52, was a preacher and deacon at a Pentecostal church in Nova Kakhovka, a southern Ukrainian town Russian soldiers invaded in early March.

Four days after the father and son disappeared, local authorities discovered their bodies in a nearby forest, according to the Crimean Center for Investigative Reporting, which cited friends of the family.

Prokopchuk leaves behind a wife, five sons, and one daughter.

Russia’s attacks on religious freedom in Ukraine “have become crueler,” according to a recent study conducted by the Kyiv-based Institute for Religious Freedom (IRF). The deaths and apparent torture of Prokopchuk and his son, along with a wider Russian persecution of non-Orthodox Christians in Ukraine, seem to bear out that conclusion. Together, the atrocities suggest Russian President Vladimir Putin’s attempted takeover is not only militaristic but religious in nature.

Some reports suggested the soldiers’ theft of a van may have been the motive for the November murders. But the testimony of a partner with Release International, an organization that supports persecuted Christians, called that assumption into question. Identified only as “Pavel” for security reasons, the partner claimed the Russian ­soldiers told the two men at the time of the abduction “their church has no right to exist, as it has connections with America and other Western countries.” Pavel told Release International the men’s bodies bore signs of prolonged torture and were mutilated so badly they were almost unrecognizable. 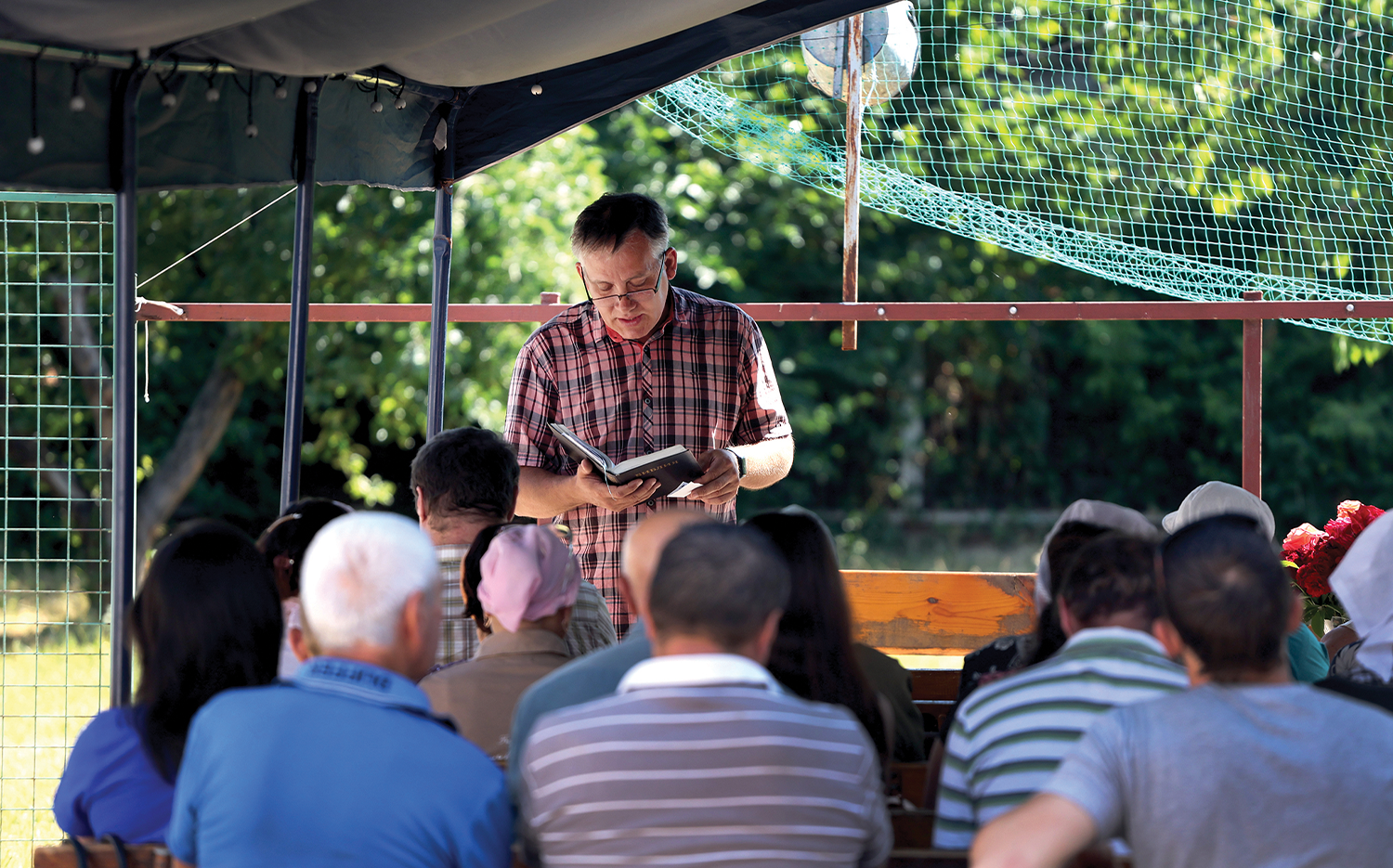 The IRF report laid out its own evidence of Ukrainian Christian persecution, offering a stark assessment. “If previously priests in the occupied territories only received death threats,” it said, “now religious leaders are tortured and killed—again, but on a scale far worse than in 2014.”

The study included testimonies from religious leaders and stories of imprisonment, torture, and the destruction of religious sites. Russian forces damaged more than 270 places of worship and ­religious learning during the first five months of the war alone.

They’ve also taken over dozens of church buildings and forced religious leaders to flee, creating an exodus of Ukrainian Christians from the region.

Less than 100 miles east of where the Prokopchuks lived, Mikhail Britsyn pastored Grace Baptist Church in Melitopol, a city of nearly 150,000 ­people. Russian forces occupied the city in March and stormed the church’s morning service on Sept. 11, shortly after the opening hymn.

“They blocked people in the hall, took fingerprints, photographed all people, and took copies of their documents,” Britsyn explained. “A week later, soldiers cut down the crosses on our church. Previously, only Satanists cut down crosses in our city.”

The soldiers interrogated Britsyn and the church’s employees and searched the grounds for “extremist literature” before driving the pastor to his home for a second search. He said the soldiers seemed disappointed when their inspection revealed nothing of significance.

Still, the Russian commander told Britsyn they were confiscating the church building and its documents. He gave Britsyn two days to leave town.

The pastor fled to Zaporizhzhia, where he has created a new ministry focus: helping congregations track down church ownership documents stolen by Russian forces and supporting the congregations still under occupation.

“This is a difficult task, because in the occupied territory the members of our churches are to some extent hostages,” Britsyn said. “More and more priests are subjected to torture, receive threats, and are subjected to deportation.” Russian forces have taken over Melitopol’s three largest Protestant churches, and at least two Greek Catholic priests have been forced to flee in the past month, he added.

He is also trying to meet the physical and spiritual needs of his own members, who have dispersed to 15 ­different countries.

The IRF’s 36-page report is one of the most thorough investigations to date on Russia’s attempts to control or expel congregations not affiliated with the Russian Orthodox Church. A delegation of Ukrainian religious leaders, coordinated by Mission Eurasia, presented the report to Congress and to faith-based organizations in Nashville, Tenn., in early November.

Ukrainian Pastor Igor Bandura was part of the delegation and told his audience the church in Ukraine will prevail. “From a faith perspective, we know the way to go is not easy. We are very realistic in our expectations and in our faith, and we know the price will be bloody and very high. But we know God will do His work,” Bandura said. “Ukraine will survive. This is what we believe.”