With new Blues album, an aging DiMucci sounds sharp in the tooth

“I feel like I have a good new friend.”

So says the slide guitarist Sonny Landreth of his relationship with Dion DiMucci, a connection resulting from Landreth’s playing on a cut from the Rock and Roll Hall of Famer’s new album, Blues With Friends.

“Choosing a song that lines up with a particular artist is really quite an intimate thing,” Landreth told me. “There has to be a chemistry, and I think Dion recognized that. I really dug the groove, and he was real happy with the results. I had fun.”

The song that DiMucci selected for Landreth was “I Got the Cure,” the latest in a line of playfully cocky Dion numbers going all the way back to his 1961 smash “The Wanderer.” It connects with his past in another way too. When he boasts of not needing “smack,” he’s alluding to a heroin habit that 50-some-odd years ago almost did him in.

What saved him, as is now well known, was his wife, his 12-step sponsor, and his relationship with God, one that in the 1980s turned him into an unlikely CCM star and in the 1990s saw him emerge as an even unlikelier Roman Catholic apologist.

Blues With Friends contains two nods to DiMucci’s faith: “Uptown Number 7” (about a train bound for heaven) and “Hymn to Him” (a selection from his CCM album Velvet and Steel reimagined in a minor key). The former features guitar contributions from Stray Cats’ Brian Setzer, the latter the background vocals of Patti Scialfa and a poignant guitar solo from her husband, Bruce Springsteen. 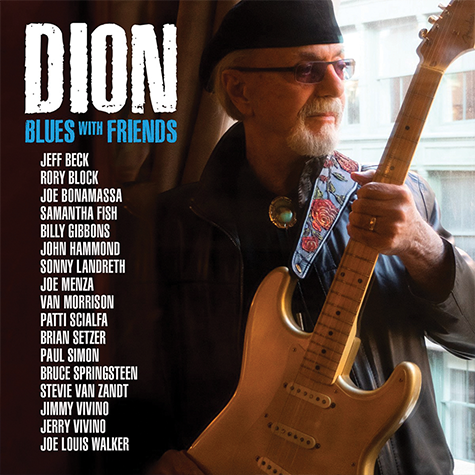 It’s the first word of the album’s title, however, that characterizes most of the songs. And, despite DiMucci’s age (he turns 81 in July), his latest blues—a genre that he has been mining in earnest since 2006’s Bronx in Blue—do not sound long in the tooth. Sharp in the tooth is more like it, thanks to the grooves of his one-man backup band Wayne Hood and a parade of guests who bring their “A” game.

Finally, there’s Mike Aquilina, the much-published Church historian who has become DiMucci’s go-to songwriting sidekick. Not counting “Hymn to Him” or “Kickin’ Child” (which DiMucci first recorded in 1965), Aquilina and DiMucci collaborated on every song.

“Dion’s a perfectionist,” Aquilina told me, “and he’s constantly refining. Some of the songs on this album have been in the tumbler for almost 10 years.”

But, Aquilina adds, “working with him has never been anything but a joy. He’s having a good time with friends, doing what he loves, and expressing something deep in his heart that needs to get out.