Dining with a feline twist

Austin’s Blue Cat Café is part of a growing trend

Balthazar, a large gray tabby, circles our table. Soon he jumps up and lounges between us, allowing us to stroke his fur. Other cats of various breeds and colors roam around the dining area. Some sleep in quiet corners, inside an old drum set, and in a hollowed-out computer monitor. One climbs up and down a rope-wrapped tree in the center of the room that leads to, well, catwalks hanging from chains 9 feet up. A television plays cat videos. This is a typical afternoon at the Blue Cat Café in Austin, Texas, one of a growing number of such cafés around the country.

Patrons pay a $3 “kitty cover” charge to enjoy time with the café’s resident cats. They may also order from the Blue Cat’s vegan menu that features a variety of burgers, salads, Tex-Mex, and espresso drinks. The owner prepares meals outside in a colorful food truck to comply with health regulations. The dining area—an inviting mix of tables, booths, and sofas—is separate from the cats’ litter boxes, accessible through a cat door. Employees wipe down tables and the floor both morning and evening.

Some might find the idea of cats and food in the same room a turnoff. But residents of Boston, Cleveland, Denver, Naples, New York, Los Angeles, Montreal, St. Louis, San Francisco, Seattle, Vancouver, and other cities are eating it up. The concept originated in Taipei, Taiwan, where the world’s first cat café opened in 1998.

Austin’s Blue Cat Café has a purpose beyond providing a unique dining experience. Owner Rebecca Gray said she “wanted to provide a positive place for people and cats—and to get the cats adopted.” The café works with the local Humane Society to link cat lovers with cats that could potentially become feline family members. More than 220 cats have found homes through the Blue Cat since it opened in 2015. 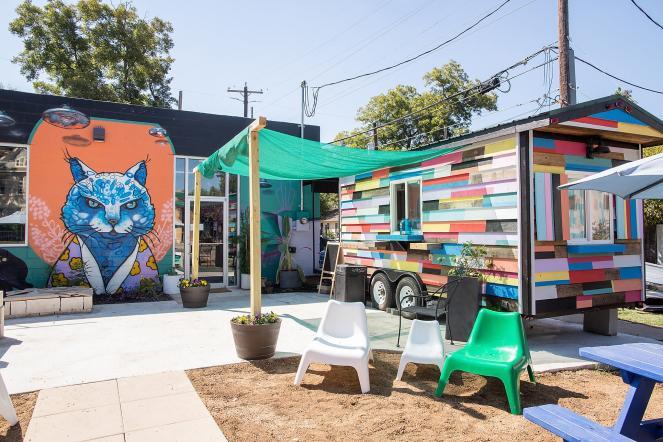 For many cat lovers, cat cafés have become destination dining experiences. Some will travel long distances to hang out with feline friends. Others come because they want to see what a cat café is like. On this particular day at the Blue Cat, a steady flow of people kept the staff (and the kitties) hopping. Kiesha MacLean and her friend Patty Kendall came from 30 and 45 minutes away because they and their children wanted to check the place out. Sandra Fly, visiting with her daughter Kelly Easley, was curious about the idea: “This is awesome! The concept blew my mind. You don’t get the chance to bond with the cats this way in a shelter. I’m not looking to adopt, but I’ll support them.”

Not everyone in Austin has welcomed the cat café. Housed in a small building covered inside and out with brightly colored cat murals, the Blue Cat sits in a section of East Austin that has changed rapidly in recent years. Empty buildings and run-down houses sit side by side with shiny new apartment complexes and restaurants. Used car lot signs announce, “No Credit, No Problem!” An abandoned car wash sits on the same block as the upscale Peacock Salon and a tavern offering craft brews.

Some neighbors in the area see the café as a sign of new vitality. Others see it as a symbol of increasing gentrification in a neighborhood once dominated by Hispanic, family-run businesses. Gray has received threatening messages from protesters. On the café’s first anniversary in October 2016, vandals defaced the property with obscene graffiti and glued the door locks shut.

Despite resistance, the Blue Cat fulfills a dream for Gray. Running a cat café is challenging: “It’s a struggle to pay the bills. This is not a money-making thing.”

After seven times as finalists, the Fisher-Price Little People finally earned a place in the National Toy Hall of Fame, located on the second floor of the National Museum of Play in Rochester, N.Y.

Fisher-Price has sold more than 2 billion Little People since their introduction in 1959. They’ve evolved from tubular wooden figures to plastic ones with arms, legs, and dimensional faces.

Why has it taken so long for the Little People to gain entry into the Hall of Fame? “They’ve been easier to overlook,” says Chris Bensch, the museum’s vice president for collections. Their limited audience of under-5-year-olds has been an additional hurdle.

Anyone can nominate a toy for the Hall of Fame, but to win a toy must have profoundly changed play or toy design, lasted for generations, be widely respected and remembered, and lead to -creativity in play. Other 2016 inductees: the swing and Dungeons & Dragons. —by CHELSEA BOES