PAPUA NEW GUINEA—Flanked by a mass of bodies singing in Kasua, “God’s book has come,” four men shouldered boxes of the first New Testaments in their language toward the Musula village center in remote Papua New Guinea.

In front, three women adorned with paint and cassowary feathers danced in circles before the procession. Behind, a throng with rattles of gourds and pill bottles kept time to fierce drumming by men with faces in rigid feather frames. They wore percussive peacock tails of reeds and clusters of crayfish shells.

The solemn overseer of this all-day celebration was village chief Amos Ulupele, who became the lead tribal translator alongside Tommy and Konni Logan, an American couple with Wycliffe Bible Translators. Some tribespeople had traveled for five days across a notorious section of jungle, limestone cliffs, and sinkholes.

Accessible only by plane, the Kasua had spent seven years clearing an airstrip when the Logans brought their infant daughter to Musula in 1991. The tribe of 600 was spread among six villages (now eight) in the shadows of Mount Bosavi, an extinct volcano. Tommy and Konni Logan, now in their 50s, were “young and wanted adventure” when they arrived in Papua New Guinea to work with Wycliffe’s partner, SIL International.

They woke to the warbling of tropical birds under coconut trees and worked amid heat, flies, and snakes called “death adders.” After years of academic study came years of translation and Biblical worldview presentation in a culture without an alphabet. Linguistic work can bring deep discouragement: “I’ve really felt that deeply,” Tommy Logan told me.

Tommy is a quiet man with a broad frame. Konni is buoyant with laughter. Daughters Rachel, 27, and Laura, 23, grew up in Musula before leaving to finish school in the United States. Together again, the family reminisced about language mistakes: The words for grace and chicken are similar in Kasua.

The Oct. 26 Kasua New Testament dedication brought together longtime translators and supporters from around the world to share in their greatest stories and deepest doubts. It can be easy to counsel patience in evangelism, said Johann Alberts, a translator with a nearby tribe, but it’s hard when he doesn’t see visible results.

For the Logans, lives did begin to change in Musula and across the Kasua language group. “Before we were living—we don’t know what was true then,” Ulupele told me in broken English, “and now we know that the truth has come to us.” The sounds of “Audibibles” (solar-powered audio Bibles) and new readers sounding out words echoed from corners of the village.

It can take years to see that truth transforming lives. Though most people in the villages go to church, syncretism with old animistic beliefs is widespread—from basic superstitions to more serious habits like sorcery or the exposure of one infant in a set of twins. Tommy Logan estimates about 20 percent are committed Christians. 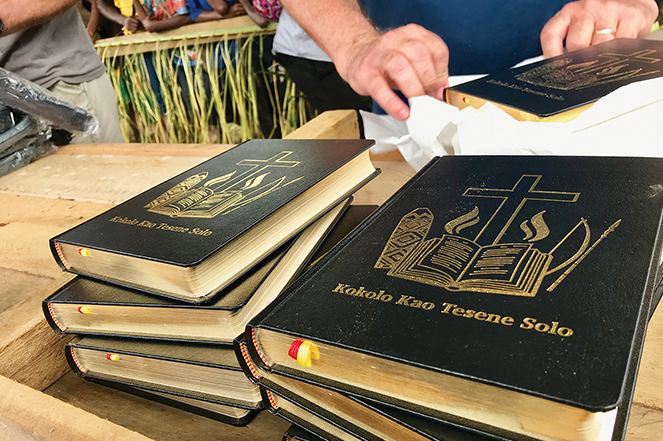 Official Papua New Guinea tongues like English and Tok Pisin, an intertribal trade language, have had Bibles for some time. But nothing matches the “fresh air” of hearing the Bible in a heart language. “He’s not just the God of the Australians,” said Badi Vila, a translator for her own coastal people. “He’s the God of the Papua New Guineans as well. He comes to us in our cultural contexts. He knows our pain and our suffering.”

The Kasua dedication wasn’t all rejoicing, though. With their role finished, the Logans are returning to the United States. At the dedication, village women sang of their departure, while others clung to Konni and wailed. In the translation office, the ever-steady Ulupele “shut and locked the door behind me, embraced me, and bawled like a baby,” Tommy Logan said.

Translators have provided New Testaments for hundreds of languages, but only one SIL-partnered tribe has the complete Bible. Tommy Logan had a closing charge to the Kasua people: If you want the Old Testament, you have to own the project. But stepping away to exhort the church to “stand up on her own” comes with conflicting feelings. Many Kasua who bought print Bibles still can’t read, and the government struggles to find qualified teachers for its cities.

“Thinking of being by myself is hard,” Ulupele said: He now leads both a village and a translation team. But translation remains his top priority, “a whole different kind of work” from other things he could do: “The truth will set you free.”

This story has been updated to clarify the number of New Testament translations available in Papua New Guinean languages.

Andrew Branch Andrew is a World Journalism Institute graduate and a former WORLD correspondent.
COMMENT BELOW