LAST MONTH, FRANK PAVONE WAS TUCKED AWAY in a television studio at the Priests for Life (PFL) headquarters in Titusville, Fla., when someone called him into the hallway. Startling news had arrived, a staff member informed Pavone. The Vatican had defrocked him—removed him from the priesthood. The internationally known pro-life priest read the news and murmured his thanks. Then he went back into the studio and continued taping spots for another hour.

Taping sessions are routine for Pavone, who has since 1993 directed PFL, Catholicism’s largest pro-life ministry. In recent years, though, Pavone’s social media activity has generated negative attention, especially over his penchant for wearing a pro-Trump MAGA hat during livestreams. But the activist maintains he wouldn’t be so overtly political if the divide over abortion wasn’t so absolute. He and his many supporters believe that divide is behind his current troubles. “Bishops have told me I’m too aggressive on abortion,” Pavone says. “My response is that when abortion stops being so aggressive on the little babies it kills, then we can talk.” But if Pavone’s dismissal truly hints that cancel culture has come to the Roman Catholic Church, pro-lifers of all religious bents are left to wonder: What could its softened stance spell for the overall movement?

“Father Frank” is a New York native who spent little time in ordinary parish work after his 1988 ordination. Instead, he took on the mantle of pro-life crusader, a role that ushered him into meetings with Mother Teresa, Roe v. Wade’s Norma McCorvey, and Pope Francis—the latter, five times. The popular priest also made headlines in 2005 when he gave the media firsthand descriptions of Terri Schiavo, as she was dehydrated to death. Bobby Schindler, Schiavo’s brother, recently wrote of Pavone, “Few people, particularly in our clergy, have done more to protect those who are in the crosshairs of a pro-eugenic agenda.”

But another name that intersects with Pavone’s is less well known. In 2008, Bishop Patrick Zurek began oversight of the Diocese of Amarillo where Pavone was anchored, even though Pavone spent most of his time at the helm of what had become a flourishing national and international pro-life ministry. Zurek, it seems, was not a fan of PFL. According to Pavone, he refused invitations to visit the organization’s headquarters and never asked Pavone for input regarding the diocese’s pro-life work. In 2011 Zurek called for Pavone’s suspension, an action that Mark Silk of Religion News Service views as a precursor to Pavone’s December dismissal. Silk is no fan, either: “Pavone is a preening zealot who has been at odds with his hierarchical superior for years, in part because of PFL’s lack of financial transparency,” he wrote last month. “In 2011, Zurek suspended Pavone from ministry outside Amarillo and barred him from appearing on the conservative Catholic TV network EWTN. In 2016, Zurek pronounced PFL to be a civil, rather than a Catholic, institution.”

But an insider at the Amarillo diocese had a different take. Senior priest Harold Waldow in March 2016 distributed a letter that detailed Pavone’s struggles with the bishop, who Waldow said had a ­“personal animus” against Pavone. As early as 2010, Waldow said, he advised Pavone to “find a way out of the diocese and Bishop Zurek’s reach.” Despite attempts to transfer, Pavone remained under Zurek’s authority. He says the damage inflicted by Zurek’s allegations of mismanagement continues to affect PFL, even though an investigation deemed its finances to be in order.

Officials at the Diocese of Amarillo did not respond to requests for an interview. 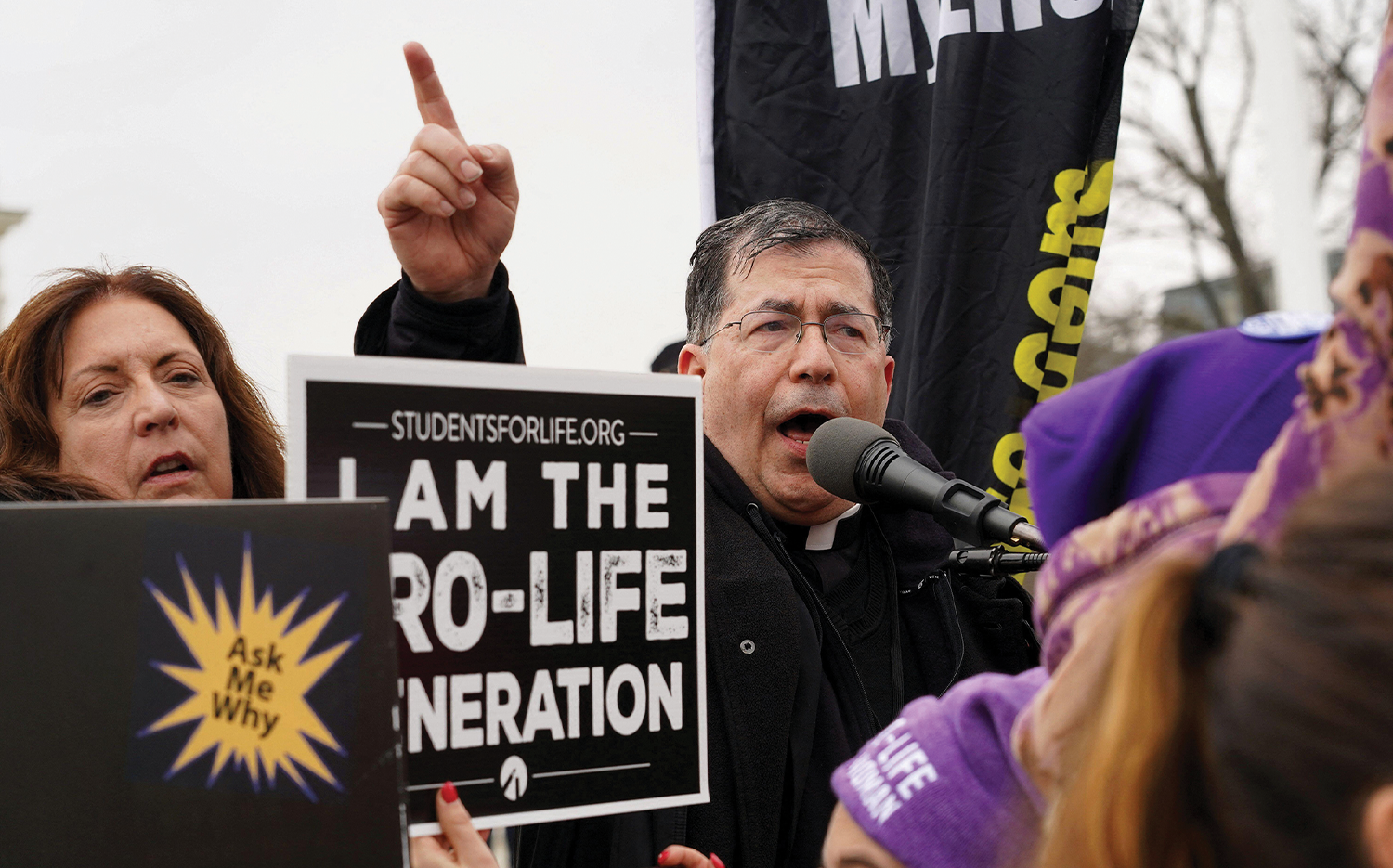 Pavone speaks in front of the U.S. Supreme Court during the March for Life in 2020. Gregory A. Shemitz/Reuters/Alamy

WHEN NEWS OF THE DEFROCKING hit Atlanta’s airwaves, Alveda King hit Pavone’s number on speed dial. The niece of Martin Luther King Jr. is a PFL board member and founder of Speak for Life. She’s also a longtime friend of Pavone. “I am his supporter, and the work of PFL will continue with Frank Pavone as executive director,” she told me. But King, like many other pro-lifers, isn’t Catholic. “I don’t understand all the ins and outs of Catholicism,” she admits.

Laicization, or being reduced to the lay state, is one of the harshest sanctions in the Catholic Church’s canon law for priests. But even Pavone isn’t clear on his standing. “I haven’t been given any letter, an email, a phone call,” he said in early January. “I heard about this like everybody else did, through the media.”

But Pavone shouldn’t have been surprised, points out the Rev. Stephen Imbarrato, a retired Catholic priest who once worked with King and Pavone at PFL. “I expected this sort of action due to his repeated failure to obey his ­superiors.” Imbarrato says he always knew his own priestly duties could hold him back from full-time pro-life work. Pavone should have ­submitted himself to that reality too, he said. “Every priest knows this.”

But Pavone maintains any perceived disobedience came from mixed signals sent by his superiors. Once, he even flew to Rome to find out where he stood. There, he says, an archbishop confirmed that Bishop Zurek, rather than being told to restrict Pavone’s ministry as reported, was free to grant him permission to conduct it. “How’s a priest supposed to obey when a bishop himself is not obeying the Vatican in regard to me?”

Still, the recent dismissal decree outlined as reasons for Pavone’s removal not only disobedience of his diocesan bishop, but also “blasphemous communications on social media.” In tweets that have been deleted, Pavone in 2020 reportedly called Democratic presidential nominee Joe Biden a “[profanity] loser” and said the Democratic Party was “God-hating” and “America-hating” and that Biden’s supporters “can’t say a [profanity] thing in support of their loser candidate without using the word Trump.”

Alveda King remembers confronting Pavone about those tweets. She says he explained that he sent the messages in a moment of anger, in the heat of the moment. “That’s certainly not enough to dismiss somebody, in my opinion, because there are people in the Catholic faith who have clerical positions that have done far more than that, and they’re still there.”

BUT 2020 WASN’T PAVONE’S first problematic election. In November 2016, he staged a political video showing the body of an aborted baby laid on what appeared to be an altar. Pavone later apologized, but apparently the episode was the tipping point for his superiors. Zurek wrote a letter to Pavone asking him to resign from his duties as priest. Still, Pavone went on to co-chair President Donald Trump’s 2020 pro-life coalition, as well as serve as an advisory board member for Catholics for Trump. Canon law forbids clerics from having an active role in political parties unless they receive their bishop’s permission. Pavone eventually stepped down from the two positions.

“You gotta obey your bishop. That’s just fundamental,” says Sam Lee, a Catholic deacon and pro-life lobbyist in Missouri. He believes Pavone’s outspoken support for Trump—things like putting pro-Trump signs outside the Priests for Life office—is unacceptable. “To promote a candidate and a political party in a way that he did is just not permitted in the Catholic Church, and it should not be permitted,” he said. Lee appreciates much of what Pavone has done for the pro-life movement, but he doesn’t appreciate how Pavone characterizes the reasons for his laicization. “To suggest that the Catholic Church is shutting down the pro-life movement is ­scandalous,” Lee said.

But some Catholics fear the defrocking signals a disturbing shift. Former Planned Parenthood facility director Abby Johnson cites the inconsistency of the move from an institution that has allowed gay priests who support same-sex marriage to remain in good standing. She says Pavone’s dismissal creates confusion in the church: “I don’t know any priest that has ever been laicized for being too pro-choice. But it feels like this laicization came because he was in fact too pro-life and made some people feel uncomfortable.”

Other signs of a possible shift? Results from a fall poll showed less than 8 percent of Catholic voters believed abortion should never be allowed. More than 13 percent said abortion should be available to a woman at any time during her pregnancy.

Maybe that’s why Pavone suspects he may now have more in ­common with the activist Baptist preacher down the road than some of his fellow Catholics. Still, he’s concerned his defrocking will have a chilling effect on priests. “They’re going to end up saying, ‘Well, gee, I don’t want that to happen to me.’”

—with additional reporting from Leah Savas