Protests that began as a pushback against a now-withdrawn extradition bill have transformed into a social movement urging greater democracy and denouncing the Beijing-backed government leaders in the city of 7.4 million.

One of the protesters may not look the part: 80-year-old Pastor Kwok Nai-wang. But Kwok has been active in the fight for Hong Kong democracy since the 1980s, and now he’s watching as another generation takes up that cause.

Born in Hong Kong, Kwok grew up in a Christian home and studied philosophy at the prestigious Hong Kong University before attending Yale Divinity School and becoming an ordained minister. He returned to Hong Kong in 1966, where he became a pastor in Shek Kip Mei.

Shek Kip Mei Estate is the first public housing in Hong Kong built after a fire in 1953 burned down wooden shanties and left 53,000 people homeless. Most were refugees from mainland China who couldn’t afford Hong Kong’s housing.

Gambling, prostitution, and drug use were common in Shek Kip Mei, and Kwok began to see reaching out to the community as part of his role. Kwok’s church met with the residents, listened to their needs, and worked to help the poor and marginalized. The church put together community events, published community newspapers, and started a kindergarten. Kwok mentored young people in the church: In the 11 years he pastored the church, 13 parishioners decided to go to seminary, and half of them now pastor local churches in Hong Kong.

In 1977, Kwok became the general secretary of Hong Kong Christian Council, the ecumenical Protestant body in Hong Kong and the second-largest social service provider in the city. The more Kwok spent time helping the poor, the more he saw problems stemming from a “highly unjust society.”

He viewed democracy as the best way to allow Hong Kong residents to participate in government, and he says the current unrest is “because [citizens] don’t have a say in electing the chief executive, who is not responding in any way to the demands of the people.”

Even though the Chinese Communist Party tried to curry his favor with invitations to mainland China, Kwok remained active within the democracy movement, according to Hong Kong’s Apple Daily. Some pastors in the council disagreed with his social activism, claiming that the Church shouldn’t be involved in politics. Others thought that by drawing closer to China, Hong Kong churches would gain access to evangelize inside mainland China. Yet Kwok believed that Christians needed to pursue justice in society, and in 1988 he left to form the Hong Kong Christian Institute (HKCI), a pro-democracy Christian think tank. 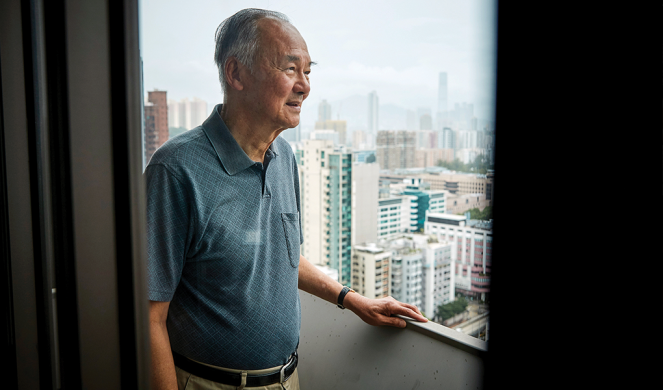 HKCI and other pro-democracy groups started pushing for direct elections in 1988, and the colonial government introduced the first direct elections in 1991, with residents choosing a third of the seats in the Legislative Council. Buoyed by the win, the groups continued to push for greater democracy, but the movement stalled after the British handed Hong Kong back to China in 1997.

Before the handover, Kwok wrote The Edge of Recolonization, a book claiming that even though Hong Kong was no longer a British colony, it would become a colony to Beijing: Human rights would diminish, freedom of press and speech would disappear, and rule of law would erode.

People dismissed him at the time, holding on to hopes that the Sino-British Joint Declaration and Basic Law would allow Hong Kong to maintain its freedoms through a high level of autonomy. But Kwok says he’s been proven right.

“Why are protesters waving the British flag?” Kwok asked. “Because the message is clear: The British treated Hong Kong a lot nicer than the Chinese government. Why? Because China is a police state, and unfortunately this is coming to Hong Kong because the chief executive invited them.”

Since Kwok retired from HKCI at age 60, he’s stayed busy teaching at Lutheran Theological Seminary, pastoring at different churches, and training pastors. In 2014 he became one of the 10 original members of Occupy Central with Love and Peace, which initiated what became the Umbrella Movement protests calling for universal suffrage during the 2017 election for chief executive. Afterward he held monthly prayer meetings for the city. In 2015, doctors diagnosed Kwok with lymphoma.

Kwok believes that the Hong Kong government can end the protests if Chief Executive Carrie Lam steps down and the government allows an independent investigation into police conduct during the protests. Many Hong Kongers are upset that police used excessive force on protesters while allowing pro-Beijing triad members to go scot-free. So far, police have arrested 1,474 people between the ages of 12 and 83 since the protests began in June.

The Independent Police Complaints Council (IPCC) is investigating the protester-police clashes, yet critics complain that it lacks impartiality, as it is composed of pro-government members. The group also has limited powers, as it cannot summon witnesses. On the other hand, if Lam launched an independent inquiry, a judge would lead an investigation that could call witnesses and examine the Hong Kong Police Force’s overall planning and behavior.

Yet Kwok also favors reconciliation in Hong Kong and says it could only come if the government provided amnesty to both the police and the protesters. He points to the amnesty provided by former colonial Gov. Murray MacLehose in 1977: At the time, bribery and corruption were common within the police force, and in order to rectify the situation, the government created the Independent Commission Against Corruption to clean up the department.

Police, civil servants, and civilians hated the commission because it took away extra income from payoffs, and police officers stormed the office. So MacLehose decided to pardon cases of corruption before 1977 through a partial amnesty. This allowed the commission to pursue very serious cases, while giving police an opportunity to start over clean, according to the South China Morning Post.

As for Chinese President Xi Jinping, Kwok doesn’t think he would militarily crack down on Hong Kong, as it would make him lose face (or lose respect) as China celebrates the 70th anniversary of the founding of the People’s Republic of China on Oct. 1.

He believes the international focus on Hong Kong has also stayed the mainland’s hand: “Face is important for China’s top leaders, so the more international attention on Hong Kong, the more carefully they would handle Hong Kong. If there was little attention today, I think the [People’s Liberation Army] would already have come into Hong Kong.”