Pastors and churches brave danger to bring relief to Venezuelans

A man carries supplies he bought in Colombia back to Venezuela. Fernando Vergara

On the second Sunday in March, as millions of Venezuelans were waking up to the fourth day of the biggest blackout in the nation’s history, Pastor Samuel Olson was thinking about morning worship at his Caracas church. “We hope to have one service,” he wrote in a text. “That will depend on the conditions.”

In a country already collapsing, conditions were dire.

A major malfunction at a massive hydroelectric dam in eastern Venezuela plunged the nation into darkness on March 7 and revealed the longtime decay of the nation’s power grid after years of neglect under Venezuela’s colossal economic and political crisis.

The blackout brought chaos: Without electricity, debit machines went down and cut off many Venezuelans from a critical form of financial transactions, since hard currency is worthless. Others wondered how to keep already-scarce food supplies from spoiling.

Physicians warned that dialysis patients would die if power wasn’t restored. A Caracas hospital without electricity or water turned away pregnant mothers in labor. In the city of Maracay, a physician told The Wall Street Journal hospital staff were taking turns using hand respirators for children on artificial respiration. 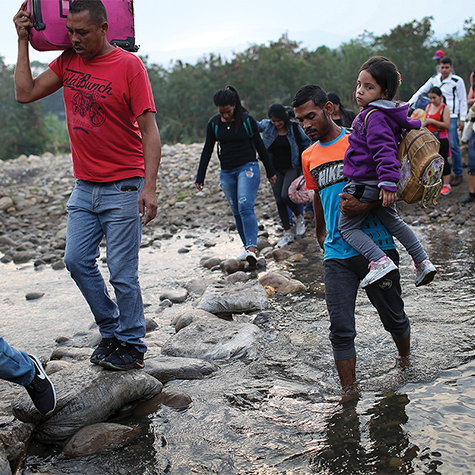 The country’s dictator, Nicolás Maduro, accused the United States of causing the power outage to force him out of office. In January, opposition leader Juan Guaidó took the oath of presidency, declaring Maduro’s power illegitimate after fraudulent elections last year. At least 50 nations—including the United States—have supported the constitutionally based move.

On Feb. 23, violent clashes erupted on the Colombian border, as Guaidó ordered an attempt to transport much-needed aid into Venezuela. In a bloody scene, Venezuelan forces and groups of armed civilians used rubber bullets and tear gas to repel aid trucks and thousands of demonstrators on two major bridges in the city of Cúcuta.

Meanwhile, a Colombian pastor from Cúcuta quietly delivered food and medicine to Venezuelan families living just across the border. (WORLD agreed to withhold the pastor’s name to protect him and the Venezuelans he helps.)

Hours before the violent clashes began, the pastor crossed the Simón Bolívar International Bridge into Venezuela with a few friends. Shortly after delivering relief supplies to families in need, the men heard gunshots. 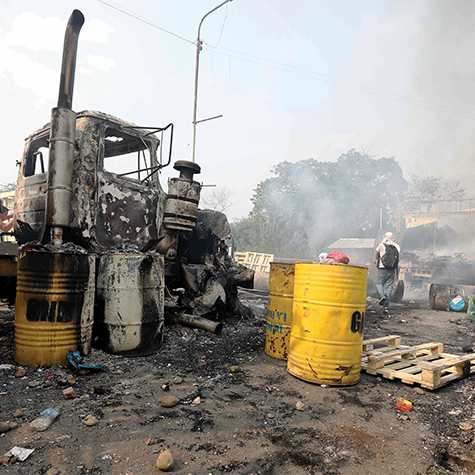 A charred truck that was part of a humanitarian aid convoy attempting to cross into Venezuela. Fernando Vergara

Villagers scattered, as civilians reportedly armed by the Venezuelan government shot into the air. The pastor and his friends sheltered in a stranger’s home. He says one of the men glanced out a window and saw an armed man shoot a passerby: “We were very scared.” (Multiple news agencies reported on armed militias firing guns in the border town.)

Authorities soon closed the bridge where clashes had begun unfolding, and the pastor and his friends hunkered down with an acquaintance in town for the next two days, waiting for the danger to abate: “We didn’t eat much because no one wants to take food from Venezuelans.”

On the third day, the men crossed back into Colombia, walking across the shallow river under the international bridge. (Many Venezuelans make a similar trek to try to cross into Colombia, despite the border closing.)

If the pastor was frightened, he also remained determined: On the morning we spoke, he was preparing to return to the border. A group of 10 Venezuelan ministers planned to cross the river and meet him on the Colombian side. 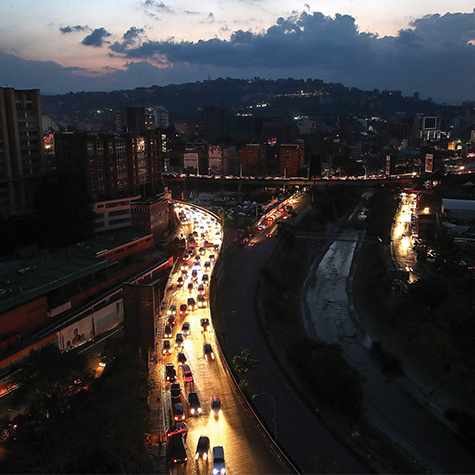 The pastor planned to give them small parcels of food and medicine to take back to families in Venezuela. “It is dangerous,” he said. “But we must have faith for the small things.”

For Venezuelans who make it into Cúcuta, more help is available. Catholic agencies have organized soup kitchens and medical help, and the evangelical aid organization Samaritan’s Purse has provided meals, medical care, and temporary shelter to thousands crossing into Colombia since last fall.

About 18 miles outside of Cúcuta, Samaritan’s Purse operates another shelter for Venezuelans trekking by foot into the Colombian mountains or making their way toward other cities. Some migrants stop for a few hours. Some stay for the night. They can take a shower, receive toiletry kits, eat a hot meal, and hear a gospel-based message.

Far more Venezuelans remain in their home country, where Maduro has refused formal offers of outside aid, but local churches find ways to help their communities. Samuel Olson, the Caracas pastor, says his church has been able to distribute food supplies through the help of Christians from other countries: “This has been virtually indispensable for our survival.”

The church members have also focused since last year on providing food for a group of undernourished elementary school students and are tracking their grades to observe how proper nutrition correlates with academic gains.

Olson’s congregation, Las Acacias Evangelical Pentecostal Church, is the largest church in Caracas, but it still faces the same trials and tribulations as small congregations and communities around the country hoping the protracted crisis will ease.