Crying out in despair

Christ is the antidote to depressing diagnoses

Beware the Ides of March, ancient Romans used to say, but Catherine Wilson’s How to Be an Epicurean (Basic, 2019) would have us, as we become ancient, beware every day. That’s because one of her heroes is Lucretius, the ancient Roman materialist who considered the absence of pain and fear to be the greatest pleasure—and the old, facing both, would have “hearts ranked with anxiety.”

Epicureans advised us to think of death as “sleep,” but Wilson realizes the inadequacy of that: “If I believed I would not awaken tomorrow, my pleasure in today would be quickly forgotten.” Her supposed solution: “What makes life feel meaningful is doing what you are able to do to a certain standard that you set for yourself, caring for those whom you like and love and being cared for by them. You can enjoy a gratifying sense of accomplishment.”

Hmm. When Wilson tries to bring her abstractions to ground level, she becomes ludicrous: “The exercise of craftsmanship, whether it’s putting together your lawnmower out of the box or organizing your sock drawer, brings order and beauty into the world.” That seems like a movie scene in which a character, slowly going insane, organizes and reorganizes her socks.

Modern Epicureans also end in despair. Deaths of Despair and the Future of Capitalism, by economists Anne Case and Angus Deaton (Princeton, 2020), mentions some key reasons why suicides and what are called “accidental poisonings” (drug overdoses) are on the rise: More Americans are “unconnected with religious institutions.” They do not belong “to a church that helps address spiritual needs. … As religion faltered, opioids became the opium of the masses.”

But, seeing yet not perceiving, they obey the country song with this noble first line: “You got to dance with who brung you, swing with who swung you.” Case and Deaton, after some good street-level documentation, show their loyalty to liberal economics by poking at a convenient scarecrow—capitalism—rather than recognizing that life without God often seems not worth living.

Claire Hopple’s Tired People Seeing America (Dostoyevsky Wannabe, 2019) portrays in short stories an Ecclesiastes-like despair. She describes a person who treats life “like a term paper with a required length, adding an extra space between every sentence and enlarging the font just a little.” One character sees a highway sign labeled ATTRACTIONS that is “completely blank. I liked this exit’s authenticity so I took it.” Hopple, who works for World News Group, offers frequent surprises: “The words ‘NEVER WALK ALONE’ were scrawled murkily, and because of his state of mind it read like a threat.”

Jon Lawrence’s Me Me Me (Oxford, 2019) challenges narratives of loneliness in Western society. Yes, we have reduced interaction with family and immediate neighbors, but more connection with people of similar interests because of increased leisure and mobility, as well as internet connections and unlimited calling. Lawrence’s England-centric story sometimes bogs down in long interviews, but he opposes the idea that communities of interest “are less meaningful to people, or less potent as bulwarks against social atomization.” 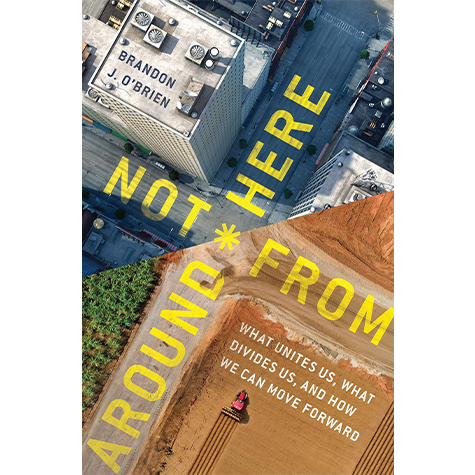 Brandon O’Brien’s Not From Around Here: What Unites Us, What Divides Us, and How We Can Move Forward (Moody, 2019) is nondespairing. O’Brien, who grew up in rural Arkansas and now lives in New York City, has made a Hillbilly Elegy–like pilgrimage: Like J.D. Vance, he sees the limitations of both his childhood home and his current residence, but he scorns neither.

O’Brien reminds us that Jesus’ first four disciples were “blue-collar” fishermen, but his fifth was “white-collar” tax collector Levi, whom other Jews viewed as an exploitative traitor for collaborating with Rome and keeping a percentage of the take. O’Brien summarizes Jesus’ message: “Wherever you’re from and however you make your living and no matter your political alliances, you have a new source of identity and mission: Me.”

Many of us, though, still look to movies as a source of identity. Two books published by Baker Academic in 2019 may provoke thoughts among Christian film students: Cinematic Faith by William Romanowski and Deep Focus by Robert Johnston, Craig Detweiler, and Kutter Callaway.

Others look to social media. Tom Baldwin’s Ctrl Alt Delete: How Politics and the Media Crashed Our Democracy (Hurst, 2019) is not well-written but includes this admission from Facebook co-founder Sean Parker: The company’s objective was to “consume as much of your time and conscious attention as possible” by using “likes” and “shares” as “little dopamine hits”—but “God only knows what it’s doing to our children’s brains.”