Former U.S. Attorney Robert Higdon was driving home from an elder board meeting at his North Carolina church when he heard the news: On Monday morning, Aug. 8, some 30 FBI agents swarmed Donald Trump’s seaside estate in South Florida armed with warrants and weapons.

Higdon, a former federal prosecutor who knows his way around search warrants and big cases, kept his hands on the steering wheel but glanced down at the radio, stunned. Had the feds really just raided the private residence of a former president?

In the ensuing days, more questions ­ricocheted around the country. Trump had been at odds with the National Archives for months, dickering over documents he had taken with him when he left the White House in January 2021. Why the dramatic raid? Why now? Was the former president embroiled in a modern Watergate, or were Democrats trying to hobble him for 2024?

Higdon knew one thing for sure: Something unprecedented in American ­politics had just happened. “I thought we had just crossed a line we had never crossed before.”

Political observers say the Aug. 8 raid on Mar-a-Lago may mark a new era in American politics: one in which the in-party brazenly uses the levers of power to punish political opponents. It’s a practice common in sweltering banana republics and fracturing Balkan states. But not here. Not yet.

From the founding, “we’ve tried to be very careful that we don’t turn political ­accusations and vendettas and grudges into criminal prosecutions,” said Higdon, who served in the Department of Justice for 30 years, prosecuting both criminal and public corruption cases, including the one against Sen. John Edwards, D-N.C., in 2011.

But has the camel’s nose crept under the tent? The Mar-a-Lago raid was like “nothing that has ever, ever happened in this country,” said presidential historian Larry Schweikart, best-selling author of A Patriot’s History of the United States. Americans do not typically pursue political opponents once they leave office, Schweikart said. The closest parallel to the Trump case is Ronald Reagan. Lawrence Walsh, the special prosecutor appointed under Reagan to probe the Iran Contra scandal, deposed Reagan by video even after he left office. But the case fizzled when Reagan’s Alzheimer’s-related memory problems rendered his testimony unreliable.

Democrats say the Mar-a-Lago raid was not politically motivated. House Speaker Nancy Pelosi pointed out that FBI Director Christopher Wray is a Trump appointee. Meanwhile, five ­different civil and criminal probes are nipping at Trump’s heels. Among them: the documents flap, the investigation of the Jan. 6 Capitol riot, and a probe into whether Trump tried to overturn 2020 election results. In addition, an Atlanta prosecutor is looking into election-tampering in Georgia, and New York Attorney General Letitia James is scouring Trump’s tax records for evidence of fraud.

On Aug. 8, federal agents scoured Mar-a-Lago, the 126-room mansion Trump called the “Winter White House.” Agents “even broke into my safe,” Trump said in a statement issued late that day. He described the operation as an “unannounced raid” and unnecessary.

Higdon is inclined to agree. Now in private practice, he worked with federal law enforcement agencies as they executed scores of search warrants over the years, many of them targeting armed thugs in dangerous locations. “But this is the home of a former president of the United States,” he said. “Every moment of every day it is guarded by the United States Secret Service. So you don’t go in there with the same concerns and risk that you would somewhere else. My first reaction was, boy, that looks like overkill to me.”

So: political persecution … or the logical next step in the legitimate ­prosecution of Donald J. Trump? The White House claims it didn’t know about the raid, and Higdon says that’s plausible: “If a Justice Department is functioning properly, then there’s very little coordination between Justice and the White House.”

Still, he finds the timing troubling. Normally, the DOJ strictly bars splashy enforcement actions when the nation is approaching a federal election since the optics might sway voters. For example, when Higdon learned of the allegations against Sen. Edwards in 2008, it was August, just as it is now. DOJ ordered him to stand down until after the ­election, which he agreed was proper.

Many conservatives say the Mar-a-Lago raid was meant to hurt Trump-backed candidates this November. But Schweikart suggests Democrats are looking further ahead, trying to scuttle a congressional “MAGA caucus” before it can solidify across the 2022 and 2024 elections. When a reporter asked Pelosi whether the raid might hurt Democrats this November, she replied with five words: “No, no, no, no, no.”

After Higdon got home from church on Aug. 8, he flipped on his television and tuned into the news. Flashing blue and red lights lit up the streets around Mar-a-Lago. Police ­vehicles and FBI agents in black, or sporting neon vests, blocked exits and a lane of traffic outside the grounds.

“It’s an unnerving thing to see the FBI raid the home of a former president,” Higdon said. “We should keep in mind that while your guy may not be in right now, your guy will be in next time, and you want the same rules to apply.”

—with reporting by Leigh Jones and Grace Snell 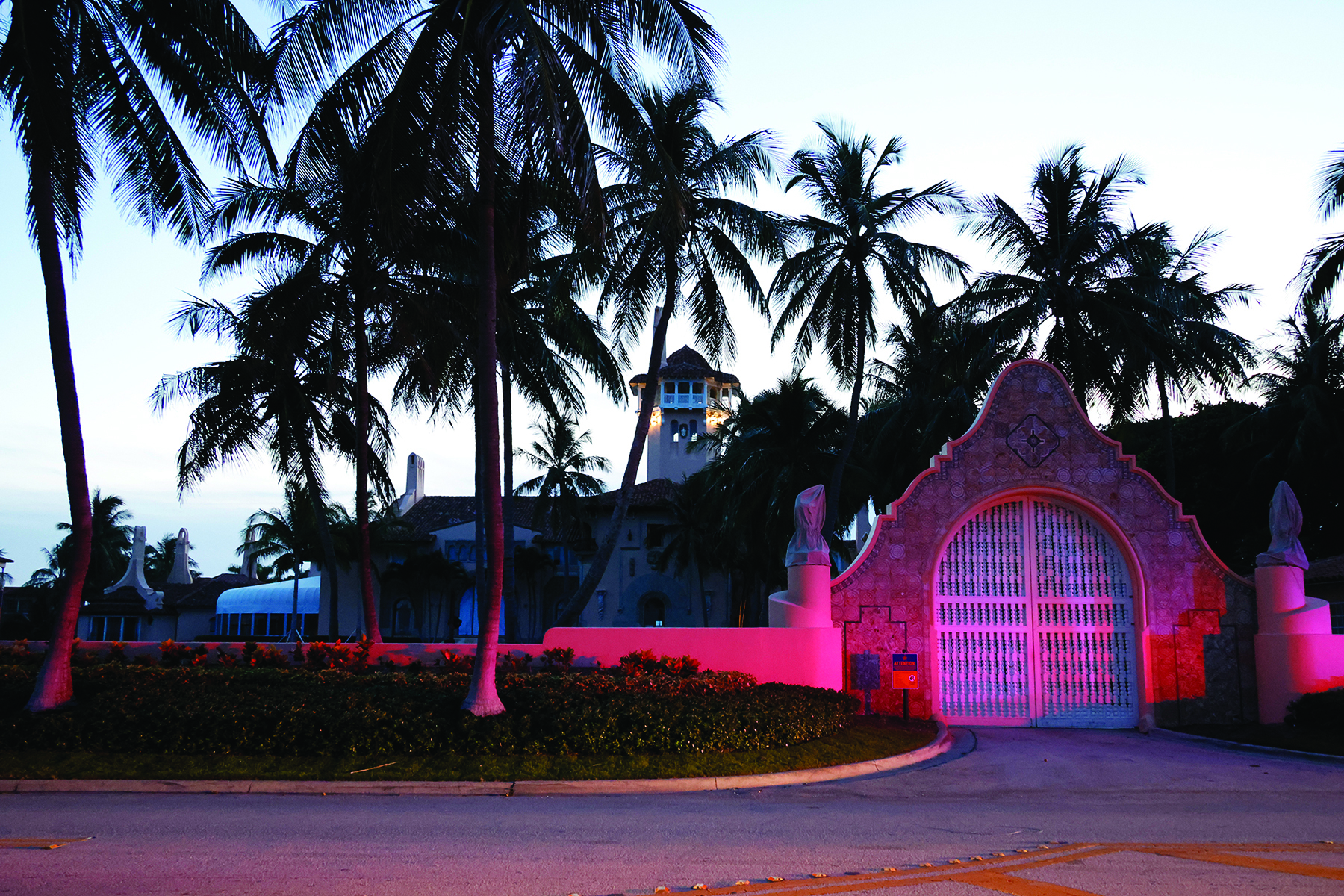