Cries for vengeance, prayers for justice

Fires blazed through a thick fog of tear gas on Nov. 12 at the Chinese University of Hong Kong (CUHK), where students dressed in black clashed with riot police and tried to regain control of a bridge on campus. In mid-November the Hong Kong protests entered university campuses and the city’s financial hub following the death of a protester who fell from a parking garage.

Protesters called for a general strike on Nov. 11, setting up barricades on roads and disrupting the city’s subway system. Anger against the police escalated after an officer shot a 21-year-old protester in the abdomen that morning. Office workers on their lunch break filled the streets of the city’s central business district in protest, while police shot tear gas in front of luxury stores and high-rises in response. Later in the day, a video circulated of protesters dousing a Beijing supporter with lighter fluid and setting him on fire.

The Hong Kong protests, which began in June in opposition to a controversial extradition bill, are continuing with no end in sight. The Beijing-backed Hong Kong government eventually withdrew the extradition bill but has refused to concede to other protester demands. Although a poll found 90 percent of Hong Kong residents support an independent inquiry into police conduct during the protests, the government justifies police violence as necessary to keep order.

Police arrived at CUHK, one of the top schools in Hong Kong, on Nov. 11 after accusing protesters of throwing objects from a bridge on campus down to the Tolo Highway and railway tracks, blocking traffic and rail services. Riot police took control of the bridge, and students treated the action as an invasion: For two days, protesters built blockades, set fires, and threw bricks and Molotov cocktails to reclaim the bridge. Police fired more than 1,000 rounds of tear gas and rubber bullets at the students.

“If there was a suspect inside the university who threw bricks on the road, then send in a few police to find out who it was and make an arrest. … Don’t deploy so many platoons,” said Francis Yip, an associate professor at CUHK’s divinity school who lives on campus. “There was no riot, no mass gathering of students before the police came in, so they have no legitimate reason to do so except for the claim that they need to occupy the bridge.”

University President Rocky Tuan and other school officials tried to negotiate a cease-fire between the police and protesters, but talks fell apart as students demanded police ensure the safety of three arrested students. Later on Nov. 12, police finally retreated from the bridge.

But the following week, another multiday standoff began between police and students at Hong Kong Polytechnic University. Police on Nov. 18 fired 1,458 rounds of tear gas and 1,391 rubber ­bullets in clashes with protesters, some of whom fought back with bows and arrows and other homemade weapons. Police arrested about 1,100 people on Nov. 18 and 19, many of them students seeking to flee the Polytechnic University campus.

One reason the protests intensified this week is the death of 22-year-old protester Chow Tsz-lok, believed to be the first confirmed death resulting from the protests. Chow died from severe brain damage and cardiac arrest on Nov. 8 after falling from a third floor to a second-floor platform at the Tseung Kwan O parking garage four days earlier. Although the cause of the fall remains unknown, it happened about the time when police officers were clearing out demonstrations from the area. Given growing public distrust in the police, some residents suspect police are to blame for Chow’s fall and subsequent death.

Protesters held two memorials for Chow, who was a professed Christian. An estimated 100,000 people showed up at Tamar Park on Nov. 9 to commemorate the computer science student. Mourners laid white flowers on a stage, while pastors and activists led prayers and gave speeches.

Jack Ng, a 19-year-old student who attended the memorial, expressed his anger toward the police: “If protesters have really done something wrong and you arrest them, that’s no problem. … But once you’ve arrested and subdued them, it’s very unreasonable to continue to use violence to add more blows.”

At a Nov. 10 prayer meeting for Chow at Chater Garden, democracy activist and pastor Chu Yiu-ming said the vengeance demanded over Chow’s death is not blood for blood, but that the wrongdoer should bear legal responsibility. Even police officers need to be under the law, Chu said: “Hatred needs to be dispelled by justice. When there’s justice in society, there’ll be stability; according to the law, everyone is equal.” 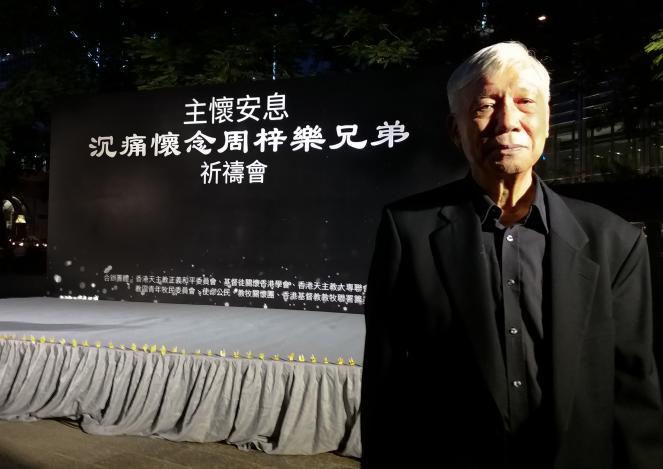 Pastor Chu Yiu-ming at the Chater Garden prayer meeting. The banner behind him reads, “Rest in peace in God, in painful remembrance of brother Chow Tsz-lok, prayer meeting.” Joyce Wu

A 28-year-old prayer meeting participant, giving only her first name as Sophia, echoed the pastor’s call for justice.“Sometimes I would ask God, Where is justice?” she said, tearing up. “I tell God, Even if I don’t avenge, could You help us, help these people, help Hong Kongers? I would hope that I wouldn’t let the hatred control me, but I am very angry.”

Pastor Yuen Tin-yau of Chinese Methodist Church stressed the need for an independent inquiry into police action. He said a fact-finding investigation should include the possibility of reconciliation and provide amnesty for both protesters and police. “If it’s the way of revenge with everyone harboring hatred, then you’re scared and I’m scared and no one will have the courage to honestly express what they’ve seen, experienced, or thought.” 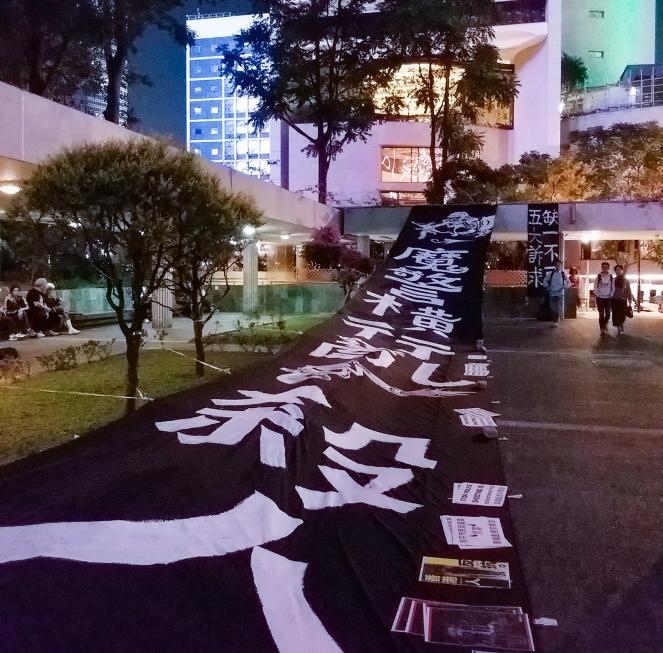 Pastor Chu Yiu-ming at the Chater Garden prayer meeting. The banner behind him reads, “Rest in peace in God, in painful remembrance of brother Chow Tsz-lok, prayer meeting.” Joyce Wu

Whatever happens in Hong Kong, God is still working His purposes, said 20-year-old Michael Chung, another attendee at the prayer meeting. “I may not understand God’s big plan, but I can be sure that He has never been absent from history. So I know that no matter how bad things can still get, when we get to the future and look back, we will find the meaning.”

—This story was updated on Nov. 21 with information about the clash between police and protesters at Hong Kong Polytechnic University.

Two people from Inner Mongolia have been diagnosed with pneumonic plague, a disease related to the bubonic plague. The illness causes high fevers and shortness of breath, and if left untreated is always fatal. Chinese censors are blocking and controlling online discussion about the outbreak.