Cream of the crop

The last milkmen of New Jersey carry on their solitary work each night—come rain, snow, or pandemic

ON A RECENT SUMMER NIGHT in Hawthorne, a New Jersey town not far from New York City, Roy Hook worked alone at a loading dock. It was midnight, and Hook was hauling milk from a warehouse cold room to his truck to deliver to local homes. The 69-year-old milkman makes night deliveries to milk boxes his customers leave on their porches or beside their garages.

Hook is one of the last old-school milkmen in New Jersey. During last year’s pandemic lockdowns, he was one of the forgotten night shift workers who never stopped showing up, along with essential workers like police, medical professionals, and those serving the homeless.

Hook and some local farms saw a surge of demand for home milk delivery at the start of the pandemic. One milk delivery company in Pennsylvania, Cow Belle, reported that its home delivery business tripled to 360 homes a week. But as people returned to grocery stores, that demand ebbed, and Hook plans to retire next year. Milkmen (and milkwomen) have been going out of style since grocery stores began selling milk and people began buying refrigerators. But Hook’s customers like the old routine of deliveries from a local milkman who knows their orders, and they leave him notes in their milk boxes.

The home delivery route isn’t profitable nowadays. Hook and his brother Tom Hook—also a milkman and a partner on the route—have sustained their business on small commercial deliveries to schools, bagel stores, diners, and delis. As the economy has revived, Hook has gotten more milk delivery requests from commercial entities, like a nearby hotel.

“We’re not trying to get customers. We do what we do because we want to,” he said as he threw a thermal blanket over the plastic jugs of milk in the back of his truck to keep them cool.

Around 60 milkmen used to work out of this warehouse, Hook recalled. He remembered when four family dairy businesses sat within a mile, all bottling milk each day. One dairy had a Christmas party every year for the dealers.

Now there are no dealers, no local dairy, and no Christmas party. The milk he delivers to families comes from a dairy in Pennsylvania.

“There’s no more little guys,” he said as he pulled out of the warehouse lot. “Just the big guys.” 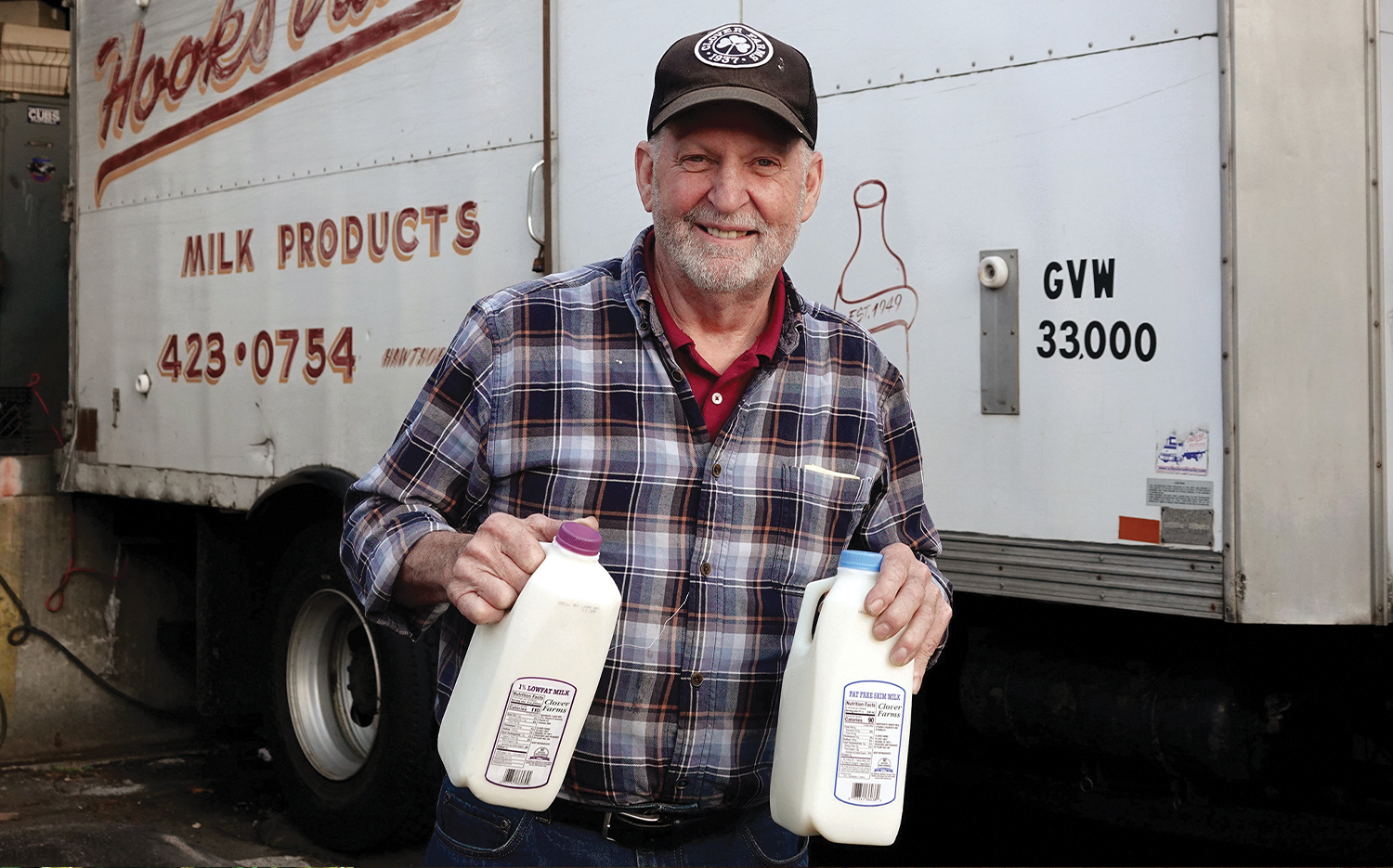 HOOK JUMPED OFF at his first stop with several jugs of milk at around 12:45 a.m., when all the houses were dark. He knows where dogs are that might wake neighbors and has a practiced way of softly closing the door of his truck outside a house. He has never used GPS but has memorized his winding route of stops past darkened soccer fields and postage-stamp yards. By working a night shift, he avoids heavy traffic.

Sometimes he and Tom have startled neighbors at night. Someone once pulled a shotgun on Tom as he brought milk up the driveway. “Don’t shoot, buddy!” Tom shouted. “It’s the milkman!”

In his career, Hook has missed only two days of deliveries because of snow, he says. He never missed a delivery during the pandemic, but it did affect him personally: His daughter contracted a serious case of COVID-19 that landed her in the hospital. (She recovered.) For his delivery routine, the pandemic meant he had more stops to make and no coffee along his route because all the Dunkin’ Donuts shut down overnight. The overnight coffee spots are still unpredictable, open one night, closed the next.

To prepare for his shift, he usually sleeps a few hours in the afternoon and then a few hours starting at 7 p.m. before getting up to start at midnight. Every night, his daughter sets up the coffee maker for him so he can just press the button when he wakes up to leave.

Hook checked his voicemail on his flip phone at about 1:15 a.m. One of his customers had called at midnight and said she didn’t need her order this week. The deadline to call is at 5 p.m., but Hook knows his customers, and this one regularly calls him around midnight. Other headaches come with being a one-man milk delivery service: His honor system for check payments in milk boxes doesn’t always work out. One bagel store left him five bad checks.

“A lot of it is our fault because we trust people too much,” he said.

A fox ran out on the street on the way to the next stop. Hook has plenty of wildlife encounters in this job, even in the suburbs. A skunk sprayed him at one house where he was delivering, and he had to throw his clothes away and take a tomato juice bath. A bear lives behind a gas station he delivers to, so he treads carefully there. 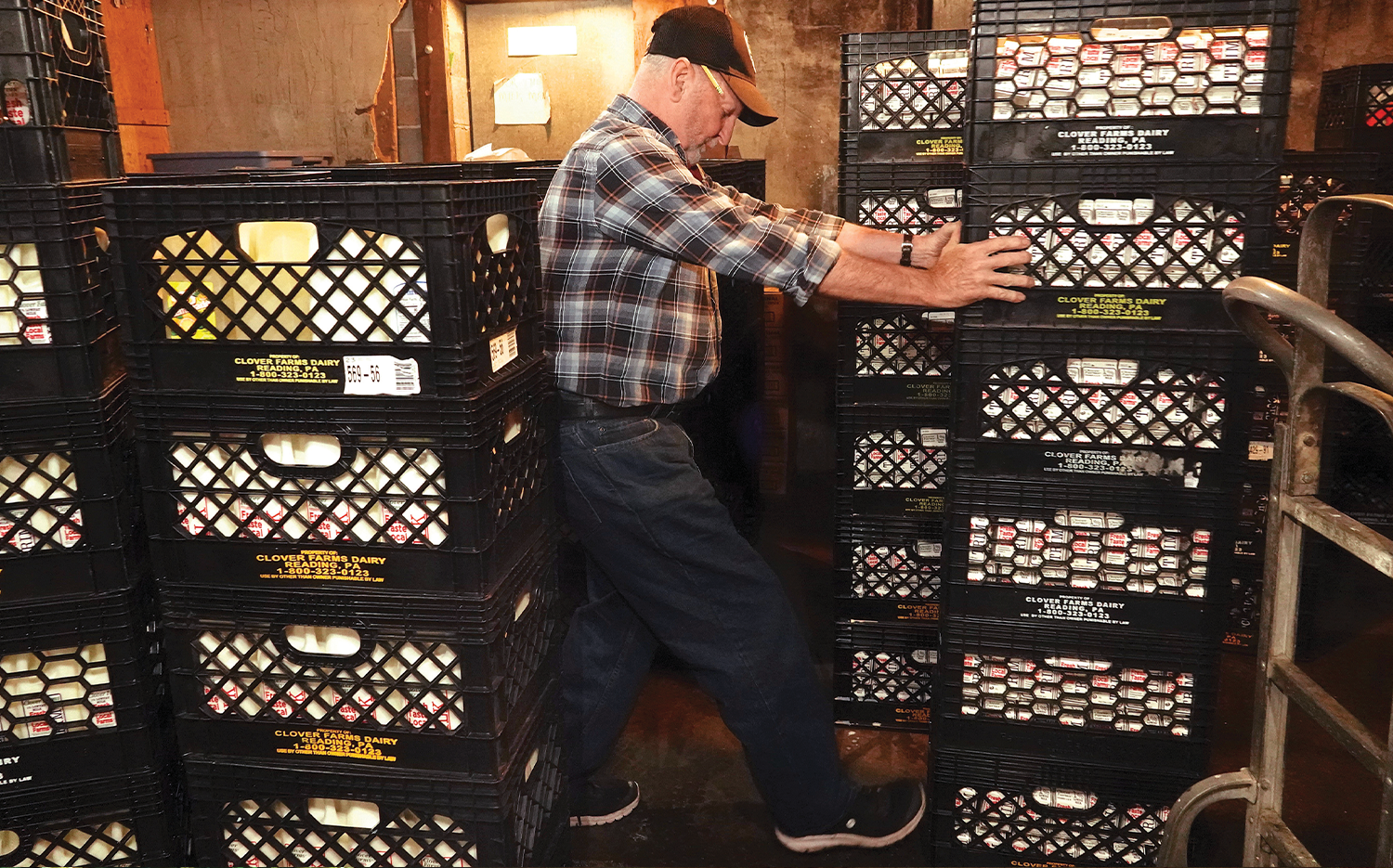 ANOTHER PLACE that never closed during the pandemic is Dee’s Luncheonette, a customer of Hook’s and a family-owned diner in Hawthorne that has been around since 1973. Hook has delivered milk to the diner since it started, according to owner Deanna Neeb.

“He’s the only milkman that I’ve known,” said Neeb, whose mother started the luncheonette. Hook knows their milk orders, and Neeb knows his breakfast order. “I don’t have to tell him anything. He had his own milk case there, and he puts in whatever.”

Sometimes Hook would come for breakfast at Dee’s at 4 a.m., Neeb said, along with electricians and painters working early hours. Neeb’s husband, David, used to be a milkman, but he drove a tractor-trailer rather than doing home deliveries. But he knows Hook through the fraternity of milkmen.

Hook started working his dad’s milk delivery route when he was 8 years old, along with his brother. Six years later, his dad died of cancer at age 40, and another milkman bought the route. When Hook turned 18, he bought his own milk route, with his mom signing the bank papers since he wasn’t old enough. He worked the night deliveries for 20 years without a vacation and told his sons never to become milkmen. “You gotta have time with your family,” he told them, even as he sometimes brought his six children along on his routes.

Hook says over and over that keeping his business “simple” is how he has supported his family for decades. He didn’t have to sell tractor-trailers full of milk or go into a lot of debt, and his brother helped him when he couldn’t deliver.

He has thriftiness too: Someone hand-painted “Hook’s Dairy” on his truck, and he just retraces it whenever it begins to fade. He, his brother, and his brother-in-law humorously agreed to get each other Christmas presents each year from trash they saw along their milk route, so long as it was functional: “no junk.”

Hook remembers listening to Milkman’s Matinee, one of the first overnight radio shows that started out of New York City in the 1930s for night shift workers–the milkmen, cab drivers, and delivery people. The show, with music and chatter from host Stan Shaw, ran from 2 a.m. to 7 a.m. Drivers could send in requests for songs via Western Union.

Today Hook still listens to the radio as he drives. One night during a call-in show he heard a caller introduce himself as “Eddie, I’m a milkman.” Hook laughed: It was a guy he knew, one of the few milkmen still delivering. 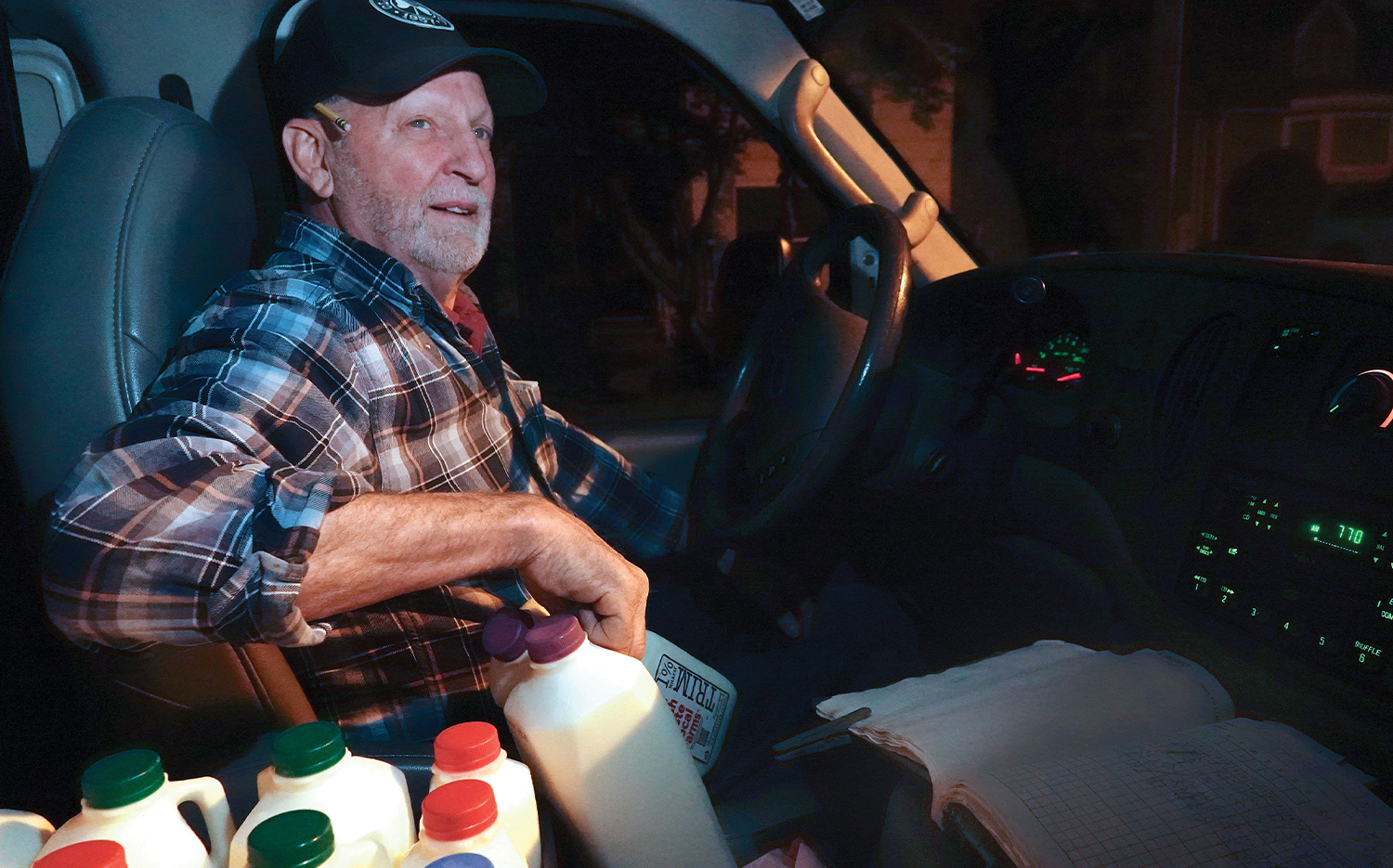 AT ONE STOP, it started raining, and Hook quickly fashioned a cardboard shield to go over the boxes of milk he put in front of a local bank. At the next stop a customer had left a note in the milk box saying she would be on vacation the following week. Hook tucked the note into her page in his route book. The driver’s seat in his truck is worn and taped up from him sliding in and out to deliver jugs of milk.

He likes to talk to the people he sees on his route. Sometimes they’ll stumble into a spiritual conversation: “I never try to push it, but sometimes I may say something like … ‘I was coming home from church the other day and saw all these cars with flat tires.’” That may lead to deeper conversations.

From 50 years of delivering he has stories. His delivery truck was stolen twice. He recalled a milk delivery strike in New York City decades ago, which prompted him and his brother to sneak a truck of milk across the George Washington Bridge. Across the bridge “we made the first right, said to the first bodega we saw, ‘Would you like milk?’”

Once when he arrived at a school to deliver milk in the dead of night, he discovered broken windows and graffiti inside and had to call the cops. He used to have keys to the schools where he delivered, but that changed after the rise in school shootings.

“It’s a tough world we live in sometimes,” he said. “Maybe that’s why I like doing this. It’s nice and quiet.”

He finished his route at 6 a.m. and had a coffee. 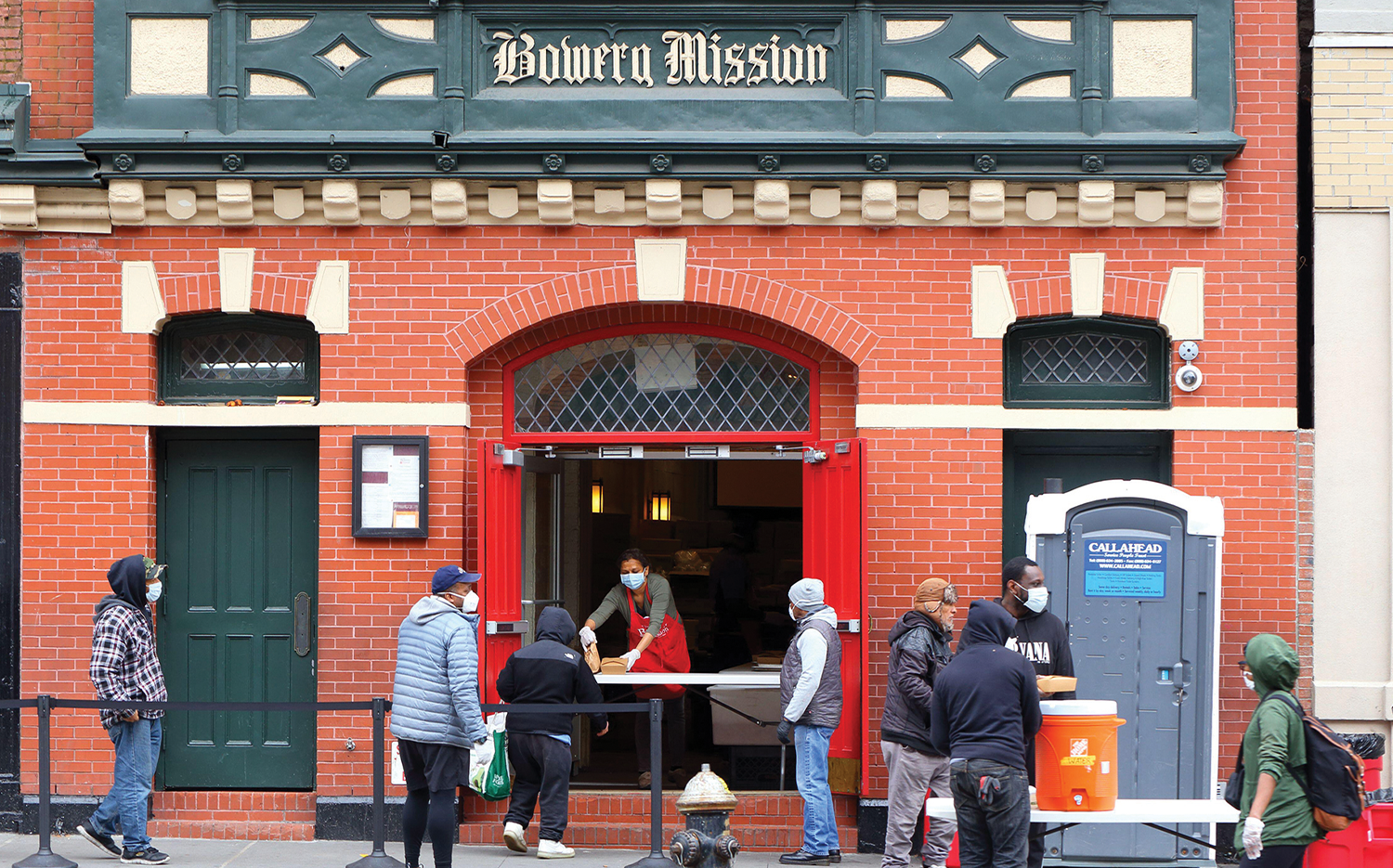 Bowery staffer Ayisha Etan worked night shifts at the women’s shelter and remembered riding late trains alongside dozing passengers—all essential workers also on night shifts. She packed her own food since restaurants were closed, and she kept bags of tea, her preferred caffeine source, at the shelter.

“I don’t think your body ever adjusts to the night schedule,” Etan said, laughing.

Etan said the women at Bowery’s emergency shelter relied on the mission’s free meals for their day’s food during the pandemic because everything else had shut down. Policymakers “didn’t think about the repercussions of people who don’t have homes, of what they’re having to go through because of the restrictions,” she said. Women in line for transitional housing, court dates, or jobs before the pandemic now felt “stuck.” Many residential programs paused accepting new applicants.

Today, with the vaccines and reopening in New York, Etan senses things have improved for the mission’s guests. When we spoke, she was preparing for a shift that started at 11:30 p.m.

“A lot of people don’t realize that people who work in shelters were essential workers on that front line, with nurses and medical workers,” she said. “I knew I needed to be here and I needed to make sure the women were safe. This is God’s ­family.” —E.B.