A Korean pop culture wave has spread around the world, and now young Americans are swooning to the music

As fans awaited the beginning of a Korean pop concert on a summer night at Madison Square Garden, concert promoters played a video on proper etiquette. Screaming or jumping around too much, it warned, could ruin the show for others.

The video had no effect. The screams from U.S. fans never stopped or dulled in intensity as Seventeen, one of the top bands in South Korea and around the world, performed for the first time at MSG. The teenage girl next to me screamed hoarsely at the band (and into my ear), “I love you!” as she filmed with her smartphone in one hand and grasped a light stick indicating her band allegiance with the other.

Seventeen showcased the magic that pulls people into Korean pop music: effortless choreography, sugary bops, and cool fashion. The crowd was young and ethnically diverse: Asian, white, Hispanic, Arab, black, and Orthodox Jewish. Many of those I met were from the Midwest and had traveled to New York for a rare chance to see their favorite Korean bands.

“It’s a good exposure to a different culture,” said Caitlin Quirk from Cleveland, Ohio, who was on her way into the Seventeen concert with her somewhat reluctant mother and a friend, Angela Sciarappa. K-pop songs are mostly sung in Korean, sometimes with English sprinkled in, and Quirk and Sciarappa, who are in their 20s, said they have learned some Korean and can recognize “very small words” in songs now. “And, it’s just really fun,” added Sciarappa.

The concert was the culmination of KCON New York, a convention for Korean culture with a focus on pop music. (K-pop technically refers to bubblegum pop bands, but can be shorthand for any Korean music.) When KCON held its first East Coast convention just outside New York in 2015, it had 17,000 attendees. This year it drew 55,000, having grown so fast that the Korean entertainment company organizing it had to change locations this year to host the dance competitions, concerts, and panels in the cavernous Javits Center in Midtown Manhattan and Madison Square Garden.

“Just a few years ago, it was almost unheard of to sell 5,000-plus tickets for a K-pop show in North America,” Derek Lee, CEO of K-pop promoter SubKulture Entertainment, recently told Forbes. “However, it now happens with regularity.”

The so-called Korean Wave (often known as Hallyu) has swept ashore all over the world, from Iraq to Indonesia. Korean television dramas are the rage in China, and Korean pop dominates music charts in Thailand. Algerian fans have begun incorporating Korean into their everyday speech and text messages. But the United States has been slow to catch on. That appears to be changing now, thanks to social media and to American pop culture’s increasingly global tastes.

Most teens and young adults I interviewed at MSG had discovered K-pop through YouTube or other social media, bypassing U.S. entertainment companies and public relations machines. Venus Nguyen, a 16-year-old from Massachusetts, said she followed her sister into the world of K-pop primarily through YouTube and Twitter. It was Venus’ first time at KCON, and she said she’d made real-life friends through their shared love of Korean pop culture.

“[American] media is confused why it’s so popular,” laughed Nick Gabriel, 23, who came to the K-pop show at MSG from his home in Long Island, along with two of his cousins. Sarah Gabriel, 16, offered evidence of how deeply Korean music has penetrated Long Island: Her parents know about BTS, the Korean pop band that has drawn comparison to the Beatles and that (like the Beatles and the Monkees) charted three No. 1 albums in less than a year.

As Korean pop culture gains a stronger foothold in the United States, longtime Korean culture watchers have ideas on the good and bad trends it could bring to the United States. Among the good things: It introduces Americans to a new culture that tends to be less sexualized and violent than American pop culture. Among the bad things: K-pop comes with a fandom beyond even that of American pop culture. The extreme fandom can make both fans and their pop idols miserable, showcased in some high-profile suicides of Korean celebrities.

Outside of Madison Square Garden before the Seventeen concert, the new K-pop fans swarmed. A gaggle of cameras appeared and began clicking away as a swank band made up of Korean teens—in high fashion and with perfect hair styling—walked down the sidewalk and into the arena. People on the street began screaming and running toward them with their phone cameras on, but the serious K-pop fans I was interviewing nearby immediately knew this band wasn’t famous and gave it no notice. The group turned out to be a band in training that would be introduced at MSG later that evening.

Despite the screaming during the concert, the American teenagers I interviewed outside MSG weren’t rabid. They seemed like normal fans. They liked the positive themes of K-pop and the high-quality, story-based Korean music videos. They didn’t care about the language barrier, and they were drawn into Korean entertainment companies’ masterful use of social media, where bands stream their dance practices or trips to get takeout food.

The teenagers’ parents liked that the stars don’t swear. As a country with a significant Christian population, Korea tends to be more culturally conservative. The conservatism of Korean pop culture is perhaps why it appeals to so many countries internationally, and why I saw Muslims and Orthodox Jews attending the KCON concert.

Korean celebrities are also much more comfortable embracing a Christian identity than their American counterparts are. K-pop bands will perform worship songs at shows or show up to perform or lead prayer at megachurch worship services. Yu said some celebrities purposefully emphasize their faith because it communicates to audiences that they’re pure and serve the community.

Going to concerts and doing interviews and sitting through auditions, Yu has had a front-row seat in the industry as the K-wave hit the globe. In the late 2000s, he recalled, the Korean entertainment company JYP tried to break into the U.S. market. JYP sent its band Wonder Girls, hugely popular in Korea at the time, on a 45-day tour with the Jonas Brothers. But Wonder Girls didn’t take off here. 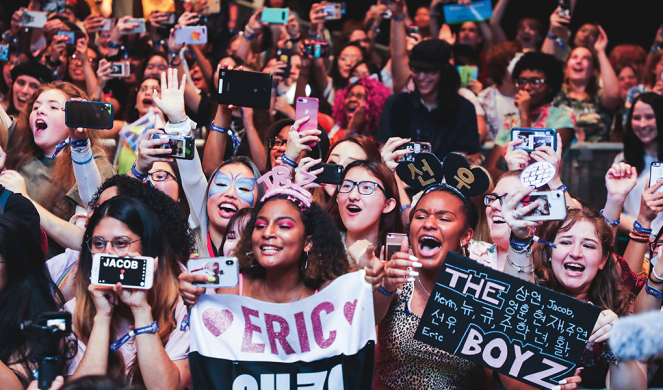 Fans scream for their favorite bands at KCON. Photo courtesy of KCON USA

FLASH FORWARD TO 2019, when BTS had a sold-out stadium tour in the United States and became the first Korean band to perform on Saturday Night Live. The YouTube video of that performance has 21 million views, compared with the usual 3 million to 6 million views big U.S. pop stars pull on SNL.

According to Yu, BTS found success because its members did things differently: They stayed in Korea during the first part of their career, didn’t force a promotion tour, and grew organically through the power of social media. They have millions of followers on Instagram and YouTube. When BTS broke out and started winning awards in the United States and climbing charts, American producers asked, “Why haven’t we heard of them before?” Yu said.

Netflix was one of the first American entertainment companies to catch on to the K-wave. The streaming service has acquired and produced Korean television and film, and this year it began releasing episodes of the hugely popular Korean fantasy drama Arthdal Chronicles in the United States at the same time episodes came out in Korea. The streaming service has also done crossover promotion shorts, having stars from its hit show Stranger Things learn choreography from K-pop band Exo, for example.

Another tech company capitalizing on the growing U.S. appetite for Korean pop culture is Viki, a relatively young streaming app for Asian television with English subtitles. With about 40 million active users, the app offers the option of incorporating social media into the TV viewing experience, allowing commentary from users as they watch. Viki noticed that fans were often commenting in real time on Korean fashion and beauty trends in the show and linking to products—a business boon. The app also offers an option to teach users Korean while they watch shows.

Yu has observed these rapid cultural changes up close. In his teenage years, when he lived in Japan, the only way to get Korean music was to ship tapes or CDs from Korea, he remembered. Now, that music is available online in an instant. When he is in boba tea cafés in Sacramento, where he currently lives, he hears teenagers talking about BTS. 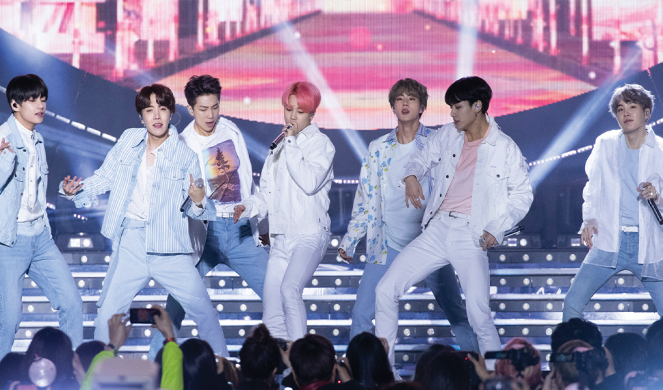 THE BTS PHENOMENON shows one unhealthy side of K-pop: the extreme fandom. When the band booked a performance in New York’s Central Park this spring, devoted fans camped out for days in freezing rain to get a spot at the show. The band members put out messages on social media urging fans to go inside for their health, to no avail.

K-pop’s extreme fandom amplifies the good and bad: creativity and connection as well as bullying and nasty comments. Before Yu posted a video on his YouTube channel analyzing BTS, he spent two weeks researching it because he knew the group’s fans would come after him if he got anything slightly wrong.

“It’s one of the harshest pop culture industries I’ve been in,” he said. “In K-pop it’s always this thing—‘I’m a better fan than you.’ … I never heard that with American fandom.”

Yu wants K-pop to go deeper than “idol worship,” and he’s a big fan of Korean indie and R&B music, which is also starting to make waves in the United States. One of those R&B artists, Dean, has collaborated with big U.S. stars like Anderson Paak, while Korean indie band Hyukoh had a U.S. tour last year.

Despite its drawbacks, the K-wave has encouraged Yu as an Asian. He remembered in college riding in a car with three friends when someone popped in a CD of Korean music. The others in the car shouted to turn the music off because they hated it. Years later, those same friends became fans of Korean groups.

“Before K-pop became big, it wasn’t seen as music to a lot of people. … Now the Western media is taking Asian music more seriously,” he said. “To me that means a lot. We’re not always the nerdy kid, the kung fu expert, or the doctor. That’s cool.”