Why would a Michigan city banish a popular, family-run orchard?

CHARLOTTE, Mich.—The day before Steve Tennes was born, his father, siblings, and grandmother planted more than 3,000 apple trees on the family’s newly acquired 120-acre Charlotte, Mich., farm, earning him an orchard in his name.

Forty years later that orchard still bears fruit. On a humid, rainy night in June, Tennes wore his signature red polo outside the nearly 150-year-old house where he grew up and he and his wife Bridget now raise their five children. They also run Country Mill Farms, a popular Michigan fruit-picking destination known for its produce, cider mill, and baked goods—and for hosting weddings at times.

This summer Tennes drove me in his golf cart down muddy paths and between rows of pumpkin and blueberry patches; sweet corn fields; and apple, cherry, and peach trees. He told me that each of his kids, including one son who died before birth, now has a namesake orchard. But he also told me that officials in East Lansing, a city 22 miles away that is home to Michigan State University, have banned him and his family from the farmers market there.

The good relationship changed late last year when a Facebook user asked if the Country Mill would host a same-sex wedding at its orchard. Tennes, a devout Catholic, responded “no.” East Lansing city officials saw that response and within days repeatedly called and emailed with requests not to come the following week because they feared protests.

No protests ensued when the Tenneses did come, with one-third of their newly harvested peaches slated for the market. They temporarily stopped booking weddings, Tennes said, “to take the appropriate time during harvest to communicate properly.” In December they reinstated wedding bookings, posting on their Facebook page that marriage is “the union between one man and one woman.”

Citing this post, city officials denied the Country Mill’s application for the 2017 market. Last January the city created a new policy requiring farmers market vendors, even those outside city limits, to comply with its “Civil Rights” ordinance both “at the market and as a general business practice.” A press release in May cites Country Mill’s violation of this ordinance and the Supreme Court ruling granting “the right for all same-sex couples to be married.” City officials could not be reached for comment for this story. 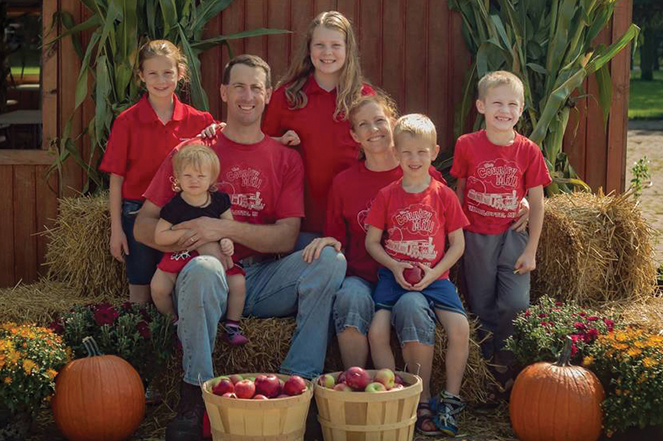 Now the Tenneses join a growing list of florists, photographers, filmmakers, and cake bakers who have lost a portion of their livelihood for upholding a Biblical definition of marriage. Last May, Alliance Defending Freedom filed a federal lawsuit on behalf of the Tenneses, stating their religious views have no bearing on their involvement in the market and the city violated their constitutional rights.

The case may determine whether the government can exclude business owners based on their religious beliefs from public marketplace events. Tennes admits the time he spends on the lawsuit takes away from his family and farm, and he and his family have received written death threats.

But Steve and Bridget Tennes are both military veterans raised by Midwestern farmers, and they’re willing to fight in court rather than give up religious freedom for themselves and their children. He says, “We have five kids who may want to sell produce at the markets someday. … It would never occur to me that we have to keep quiet about what we believe to avoid government punishment.”

The five children already contribute to the Country Mill’s mission of “family fun on the farm.” Two of the sons say their favorite tasks are loading the “pumpkin pitch,” handing out doughnut samples, and collecting deer apples for local hunters. One son is helping engineer a new apple cannon. The oldest daughter boasts the record as fastest cashier. Throughout the year the farm hosts educational field trips for school districts and colleges, kids camps, and “u-pick” events that benefit local food banks.

The Tenneses also employ more than 70 seasonal workers, including many local teens and at least one LGBT individual. They host an employee pizza night on Sundays. Steve Tennes says Country Mill’s reputation and business practices are directly linked to their faith: “It is central to who we are. ... It tells us to love our neighbor as ourselves.” He serves on numerous boards for his Catholic church and school, veterans groups, and local and state agricultural organizations.