A phone alert at 12:59 Saturday morning startled Patti Sawyer, but it was the rare sound coming from the local middle school’s warning system that grabbed her attention. Shaking her husband awake and corralling their four sons, Sawyer pushed her family to their basement where they waited, hugging pillows and listening to the wind. Mounting pressure in their ears left them with silence. Then they heard the cries of their neighbors.

“We grabbed flashlights and headlamps and started looking for people,” Sawyer recalls, describing frantic rescue efforts in their Bowling Green, Ky., subdivision, Whispering Hills. “We were also checking the weather app to see if there was anything else coming.”

The destructive weather surprised Sawyer. Its deadly punch surprised a swath of eight states, too, killing at least 89 people as more than 30 tornadoes ripped and roared across the Heartland. Although the National Weather Service in advance predicted severe conditions, nighttime tornadoes are problematic. They’re hard to spot, and they arrive as potential victims sleep.

Kentucky Gov. Andy Beshear deemed Saturday’s storms his state’s worst-ever tornado event, choking up at a briefing as he reported a 5-month-old among fatalities. At least five twisters hit the Bluegrass State, including one with an estimated 200-mile-long path of destruction. In addition to lives lost, thousands of homes were damaged or destroyed and more left without utilities.

Kentucky suffered the most from the swarm of twisters, with a death toll of at least 75. The tornadoes also killed six people in Illinois, where the Amazon distribution center in Edwardsville experienced damage. Four died in Tennessee, another two in Missouri. At a nursing home in Arkansas, the destruction claimed two lives even as workers shielded residents with their own bodies. Aid groups, including Christian organizations and churches, have flocked to hard-hit areas to help victims pick up pieces of their lives in the days before Christmas.

Due east 160 miles of the Sawyers, Autumn Kirks was working the night shift at Mayfield Consumer Products when the twisters hit. She says employees were trying to keep up with Christmas orders: “We were running the lines, then the sirens went off and we barely had time to get everybody back to the hallways before it hit. I mean, there was no time at all.”

After the wind died down, Kirks said she looked up and could see the sky. Then she heard screams and realized the tornado had leveled the Mayfield candle factory, trapping Kirks and three others beneath a wall. She says a fellow employee came to their rescue. “One of the girls was crushed really bad, and the guy, I'm pretty sure his leg was broken,” she said.

Morning light revealed further devastation. Kirks’ boyfriend lost his life in the factory. At least seven others did as well.

Samaritan’s Purse placed two disaster relief teams in Kentucky and one in Trumann, Ark., just miles away from the destroyed nursing home. Clay Spellman is overseeing the Arkansas operation, where volunteers began cutting trees and tarping houses as early as Sunday. “So often people see what the Church is against, and they hear what the Church is against,” he explains. “This gives us a chance to show what the church is for.”

Spellman welcomed three volunteers with special experience—Floridians who survived Hurricane Michael and the upheaval that followed. Spellman says he’s never lived through a tornado, so he can’t really speak into the lives of the homeowners. “But this team of three gentlemen can say, ‘You know what, I’ve gone through this. I know what this is like, and the hope of Christ is what will pull you through this.’”

In Paducah, Ky., Senior Pastor Charles Moore sensed a clear call to ministry after observing tornado damage just a half-hour drive from First Baptist Church: “It looks like a bomb went off down there. I met a man who got out with just one shoe. That’s all he could grab.”

Before the weekend was out, the church’s food truck had prepared to go into action, serving a thousand hot meals—Coney dogs at lunch and biscuits and gravy for breakfast—to workers and homeowners assessing damage. Moore said the church gym is also in use, acting as a distribution center for supplies arriving from donors as far away as Oregon and South Carolina. “The word got out on Facebook, and people just rallied,” Moore said. “A pastor from Louisville called us out of the blue and said his church felt burdened. He asked if they could partner with us.” 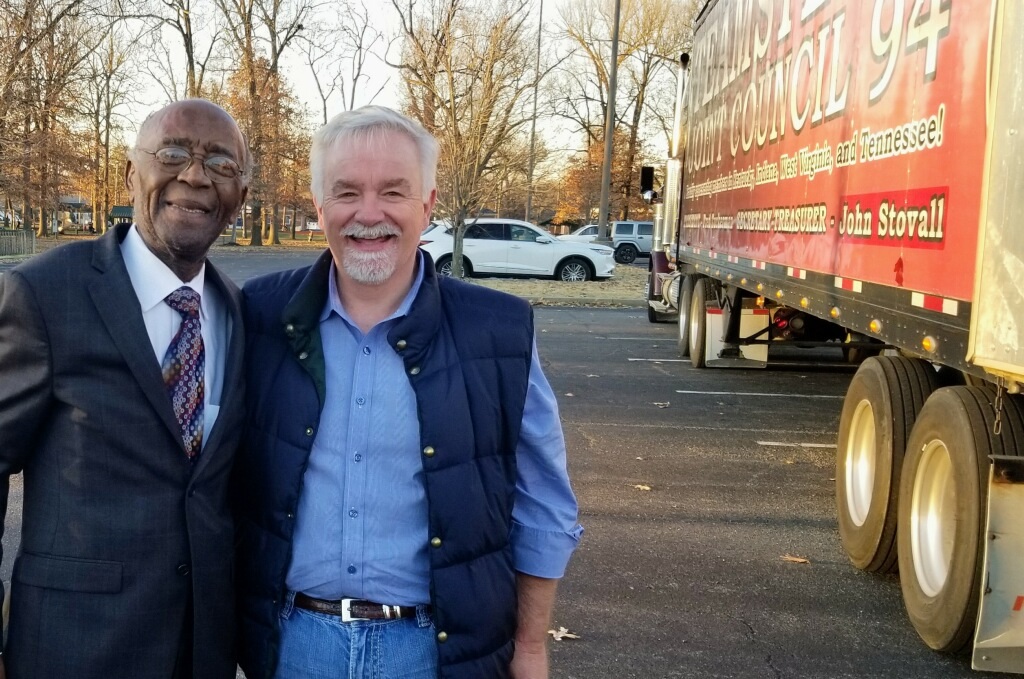 That pastor, Charles Elliott of King Solomon Missionary Baptist Church, brought volunteers and an 18-wheeler loaded with supplies. Elliott marched with Martin Luther King Jr. during the nation’s civil rights struggles, and after 60 years in ministry, he’s glad to see God bring Christians together to serve in Paducah: “When things like this happen, it teaches us that there’s not a black race or white race,” he stresses. “Just a human race.”

First Baptist also worked with a local Drury Inn representative to offer aid to 30 displaced families staying at the hotel. The church provided gift cards from a restaurant within walking distance, then offered individual “shopping” time inside a bus filled with scarves, coats, batteries, personal hygiene items, and other supplies. Pastor Moore says the intention is long-term: “We want to build relationships. How can we help? How can we love on their kids for Christmas? Most parents aren’t interested in toys right now. They’re just trying to think about survival.”

Moore is also concerned about older residents nearby. “Many times, they have no one, no family nearby,” he says, mentioning an 80-year-old he saw trying to put a tarp on by herself.

State police and local law enforcement agencies are busy conducting welfare checks to determine if such citizens are in need. They’ve also helped establish contact between residents and relatives who have been unable to reach them. Likewise, some 500 National Guard members mobilized in Kentucky to help maintain order, search for those presumed dead, and enforce nightly curfews.

The storms’ life disruption comes at a crucial time on school calendars. Students at Northside Baptist Christian School in Mayfield missed finals this week. Instead, they’re out of class, helping man a donations site on school grounds. Principal Jenny Page says their buildings and families were pretty much untouched, but they can’t operate without utilities: “We’re just prayerful that we can return in January and give our kids some normalcy again.”

Back in Bowling Green, Patti Sawyer has paused her family’s homeschooling schedule too. Right now, she’s focused on keeping her door open for neighbors who need to use the restroom or workers who need a snack. And she’s thanking God for showing her family mercy. Her family’s 1960s-era residence is one of few left standing in their neighborhood.

“Workers were picking up debris and moving it in my neighbor’s backyard, and there was a state police [officer] standing there, watching them do it. And I’m like, ‘Why is he watching them move debris? Doesn’t he have something else do?’ And it hit me. He was watching them because he was looking for what could be in the debris. Maybe victims of the tornado. It hit really hard.”

The Associated Press contributed to this report.

Just one correction. Mayfield is “west” of Bowling Green

Prayers going up from all over the world for these folks. I cannot even imagine...