MANCHESTER, N.H.—Children’s laughter bouncing off the walls: New Life Home has that sound, and typical long-term drug recovery programs don’t. A shy, smiling 2-year-old runs around the white clapboard home with peanut butter on his chin: His mother had escaped a gang and planned to abort him before meeting a New Life graduate. The mom is now a graduate of the program and became a Christian in the process.

New Life Home, which helps primarily opioid-addicted women in an 18- to 24-month program, is the rare residential program that allows women to bring their children with them. The Duplo blocks on the basement floor, the stuffed animals meticulously lined up on a bed upstairs, and the 35 tricycles and bicycles lined up at the fence outside change the dynamics from that of strict dorm to home. The children’s presence gives mothers motivation every day to continue their recovery.

New Life’s approach has proven solid over its 38 years in New Hampshire: The graduation rate is 89 percent. Behind the statistics are stories of mothers reunited with children they had lost to the legal system. Shauna’s 2-year-old—a boy at one point scheduled for adoption—lives with her. After seeing her progress at New Life, the Massachusetts Department of Children and Families reversed its adoption decision. Her caseworker told her she had never seen a case go from adoption back to reunification.

Shauna (WORLD agreed to use the New Life women’s first names only, due to the physical threats and job-hunting obstacles they face) had been sexually assaulted as a teenager, and then again when she served in the military. She had turned to opioids and alcohol. On the drive home from her intake interview, she wept because she thought New Life would never take her—the women she saw were so put together and happy, and she was a mess. But she’s now been in the home for 15 months, and her dad is so thrilled that when he visits he solicitously offers to get coffee for staffers.

Rachel, who escaped a violent gang situation and has been in the program for 22 months, now has her three children with her. Rachel’s parents found her living homeless on the street and pushed her to enter New Life and be a mom again—at that point she hadn’t seen her kids in 18 months. “God gave [my kids] to me for a reason, and He knew everything that was going to happen,” Rachel said. “I need to restore my life with my kids, that’s why I’m here. I’m not here just for myself.”

Brynn, a 30-year-old mother of two, grew up in rural Maine and plays trombone, clarinet, piano, saxophone, and guitar. She had gone from performing arts college studies to opioid addiction. She was sex-trafficked and had overdosed six times before arriving at New Life in January 2016. She didn’t believe in change then, but she wanted to win a chance to see her children before she died. At a low point in 2014, Brynn had left her two daughters at her mom’s house. Her children still live with her parents, but they come to stay at New Life for longer and longer periods of time.

GEORGE AND GRACE ROSADO founded New Life Home 40 years ago with an eye for detail that has given their program success and longevity. George combed auctions from restaurants going out of business to find tasteful secondhand furniture that would keep the home from feeling institutional. Grace insisted on the women dressing professionally at the home unless they were doing chores.

Some of New Life’s unusual practices: The women aren’t allowed to share their backgrounds with each other unless staffers give the go-ahead, so that everyone is on equal ground. Staff members don’t want them to be defined by a past in the gang world or prison. The women also can’t talk to each other one-on-one without a staffer present: Sharing potential contacts and old friends could lead them to spiral into their old life. They are constantly supervised, and even ask permission to get a Kleenex.

Women don’t have to be Christians to enter the program, but during the intake interview, a staffer will ask if they are open to God working in their life. The women go each week to Bethany Covenant Church, a church that closely partners with the organization. The organization has support from about 50 churches, from charismatic to Reformed denominations. “Our focus is, number one, getting the women a good foundation in the Lord,” said Grace Rosado.

The residential program also has more traditional Christian recovery traits. Volunteers teach classes about the Bible, parenting, running a home, and developing Christian relationships. Quilts that the women have made for their children in quilting classes spread over the kids’ beds. The women study for their GED diploma or a college degree. One graduate is working on a Ph.D. at Gordon-Conwell Theological Seminary. 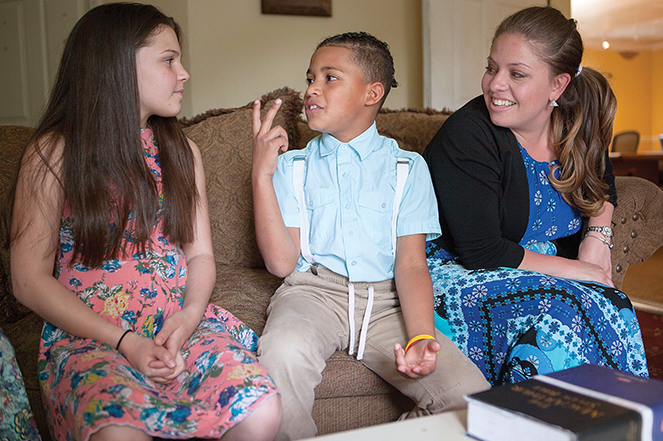 Rachel (right), a resident at New Life Home, talks with her children after they return from school. David Kamerman/Genesis

The program doesn’t have a firm timeline for graduation: Staff members decide together if a woman is ready to graduate. After a woman graduates, the staff evaluates her transition depending on her needs. Some women stay and join the staff. Others have a period of living in the transitional house while they complete schooling or find jobs. Meanwhile, they can enjoy graduate and chef Starla Hamill’s good cooking, with lots of fruits and vegetables: Following the neat pattern of everything in the house, vegetables in the pantry are lined up in tidy rows.

Part of the reason New Life is in such demand now is the opioid crisis. New Hampshire has the nation’s highest rate of deaths from fentanyl, an opioid more powerful than heroin. This past fall New Life had to stop taking interviews for the program because it had a long waiting list and no available beds. Right now 15 women and 20 children live in the home, and women graduates live in the transitional home across the street. In years past, most of the women in the New Life program were in their 30s and 40s. Now most of the women are younger, in their 20s.

Last fall a woman eight months pregnant and addicted to heroin called wanting to enter the program. The house was packed, but the receptionist set an intake interview for the next Tuesday. The woman was staying with her mom, who had searched her for drugs. Over the weekend the woman overdosed, and she and her baby died. That’s when the organization’s board talked about finding another house. New Life recently bought a beautiful old home around the corner and is in the midst of renovation to add more beds.

Staffers bear the weight of the opioid crisis in other ways. Grace Rosado is now New Life’s executive director. (Her husband George has retired while dealing with health issues.) In April, a probation officer came to Grace’s office in tears. A 22-year-old woman who had been in the officer’s caseload for 11 years had just died of a heroin overdose. The officer went to Grace because she was the only “God person” he knew: Grace agreed to visit the family and read Psalm 116 with them.

“I don’t want to do any more funerals,” Rosado said—and in 40 years she has never had to go to a funeral for a New Life graduate who overdosed. That success, along with the opioid crisis, brings others to study their model. Phyllis Phelps was one of the early graduates of New Life in the 1980s with her daughter, before she met her husband Bill. She later worked at a pregnancy resource center in Keene, where she counseled one of the women to keep her baby and come to New Life. The woman did, and graduated. Now the Phelps’ church in Keene has sent the couple to serve a yearlong apprenticeship at New Life, with the goal of setting up a similar home in Keene. 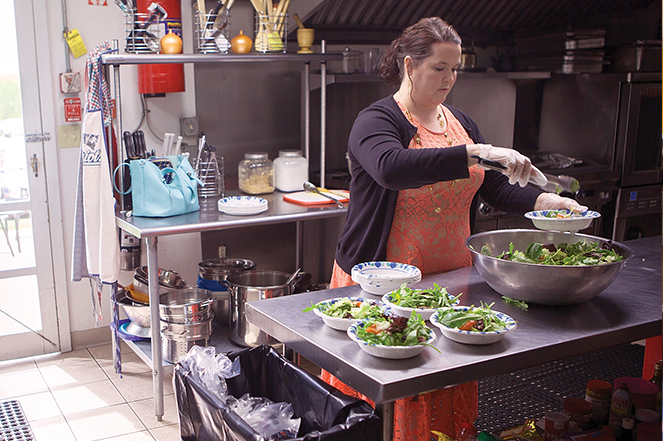 NEW LIFE IS HELPING 30-year-old Brynn climb out of a deep hole. She graduated from a 30-day program and got a job; but when someone offered her crack, she tumbled even deeper into addiction. On heroin, crack, and alcohol, she was starving, beaten, and raped many times. She avoided contact with her family because “I didn’t have anything good. What am I going to say?” Eventually she went to jail and called her mom from jail. Her mom and dad had recently become Christians, and her mom told her about New Life.

When Brynn agreed to enter the New Life program, her parents told her that if she stuck with it for a month, they would bring the children to visit. The night before she began the program, her brother brought her to a hotel where her parents were waiting with her two daughters. Brynn hadn’t seen the kids in 18 months: She was so deep in addiction that she had forgotten what they looked like.

“I will never ever forget that feeling,” Brynn said, telling the story right after finishing vacuuming the home’s hallway. She began to cry. “[God] restored my kids to me and restored my family to me before I did anything. … I just showed up and everything was waiting here for me.”