BACK TO SCHOOL | From famine to war, disruptions limit learning around the world

Rohingya refugees attend class at an open-air madrasa, or Islamic school, in a camp in Bangladesh. Dibyangshu Sarkar/AFP via Getty Images

TWO MILES FROM A BOMBED-OUT VILLAGE in Myanmar, students worked quietly in an open-air jungle classroom as mortar explosions echoed in the ­distance. Their teacher had divided them into small groups in separate clearings to ­prepare to take their final exams. The teacher told them they had one hour to complete the test.

None of them protested about struggling to ­concentrate with a battle raging close by.

After Myanmar’s military coup on Feb. 1, 2021, ruling officials tried to reopen schools closed since the pandemic, with limited success. Over half of the country’s teachers—and about 90 percent of Myanmar’s students—refused to show up for class.

The COVID-19 pandemic created learning challenges for children around the world. American kids struggled with virtual learning, educational delays, and isolation. But war, famine, and scarcity multiplied those challenges in places like Myanmar, Bangladesh, Ethiopia, and Mali. The fallout still plagues students in conflict-rife countries, leaving teachers struggling to keep educational needs at the forefront.

As Myanmar’s military junta sought to solidify its control over the country, some teachers opened their own schools in defiance and with significant risk. During a single week in July, the military arrested 15 teachers from an online school with ties to the National Unity Government, an anti-military group. Since the takeover, the United Nations has reported at least 260 attacks on schools.

Dave Eubank, director of Free Burma Rangers, said students in the jungle schools are always prepared to move because of attacks. “They get to a new hiding place, clear the jungle, make shelters, find a way to get food, and then start school again,” he said.

Resources vary widely at these clandestine schools. Some shelters are made from wood or bamboo. Teachers use dark rocks in place of chalkboards, while others use whiteboards they’d whisked away when they fled their villages.

Even before the 2021 military coup, members of the minority Rohingya group faced ethnic violence. After targeted military operations escalated in August 2017, the number of Rohingya fleeing to neighboring Bangladesh swelled to over 900,000. Today, many of the primarily Muslim families stay in camps, where the children attend schools typically run by international aid groups.

Fredrick Christopher, World Vision’s Rohingya Crisis Response director in Bangladesh, said by mid-July 2022, only about 10 percent of 6,000 camp learning centers had reopened their doors since COVID-19 first closed them.

“When I see [the children] on a daily basis, my heart really bleeds,” he said. “They don’t have any hopes at all. … [Parents] want their children to grow in knowledge and develop their skills and to fly away. But there is no school.” 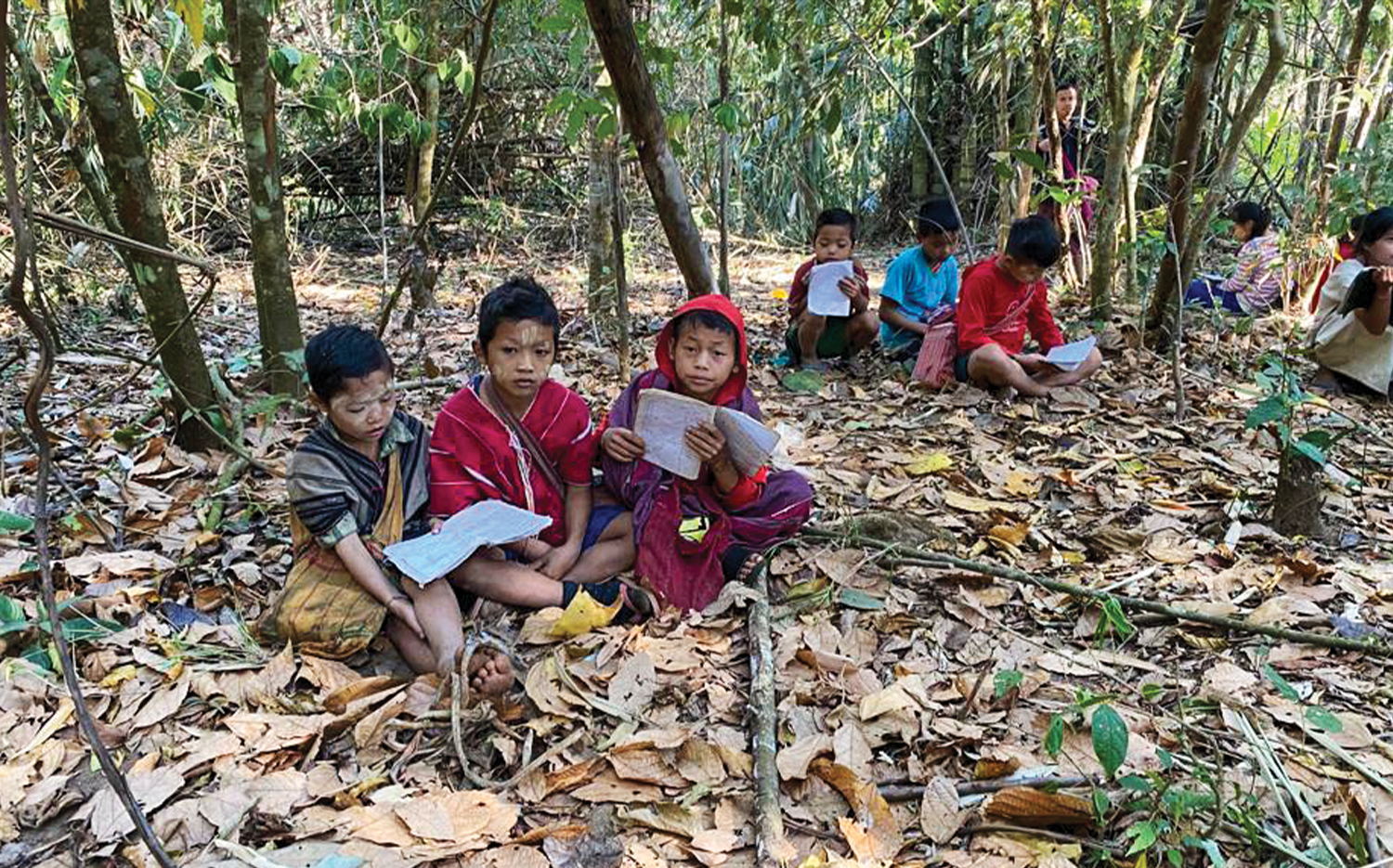 Myanmar students use the jungle as a classroom. Free Burma Rangers

The village, run by Rafiki Foundation, provides schooling and housing for orphaned and vulnerable children. Each morning, teachers walk some 172 day students from the gate to the dining hall. The 51 children who live in the village have their meals during an earlier shift.

Divided mealtimes started with the pandemic, and the practice has continued, said Amy Ketcham, who oversees the center’s childcare program.

When the Ethiopian government shut down schools on March 16, 2020, the Rafiki children kept busy. They repainted walkways, helped with mowing, and worked on creative art projects in their library. But their education suffered.

Schools reopened in September, but Ketcham said the government gave Rafiki’s classical Christian school only four weeks to help the children catch up to where they should have been at the start of the new school year. The youngest students showed the most learning deficiencies; still, the preschool had to alternate school days to comply with social distancing regulations.

“Our early childhood students, especially those going from kindergarten to first grade, were really lagging behind not only in language skills, but in numeracy skills, even in social skills,” Ketcham said.

Two months after students returned to class, war broke out between ethnic Tigrayan forces and ­government troops in the northern Tigray region.

Classes continued at Rafiki, but students and teachers felt the impact. Checkpoints complicated travel. The conflict also blocked some supply routes. The village prepares about 600 meals daily during the school year, and the staff struggled to obtain staples like beef. Tekle Kumera, the village administrator, said staff prepared meals over circles of firewood outside the kitchen until they could get cooking gas.

Fighting eased after a humanitarian truce in March, but its effects linger.

The United Nations Office for the Coordination of Humanitarian Affairs said more than 2.93 million children across Ethiopia are still out of school, mostly due to conflict. Aid groups are trying to pick up the slack. Karen Elliott, Rafiki’s executive director, said the center plans to take on 432 more children across its 10 African villages, including in Ethiopia. “We trust the Lord to provide what we need,” she said.

In the Western African nation of Mali, threats from Islamist groups have kept children out of school. The Norwegian Refugee Council recorded a 15 percent jump in out-of-school children in the past year. 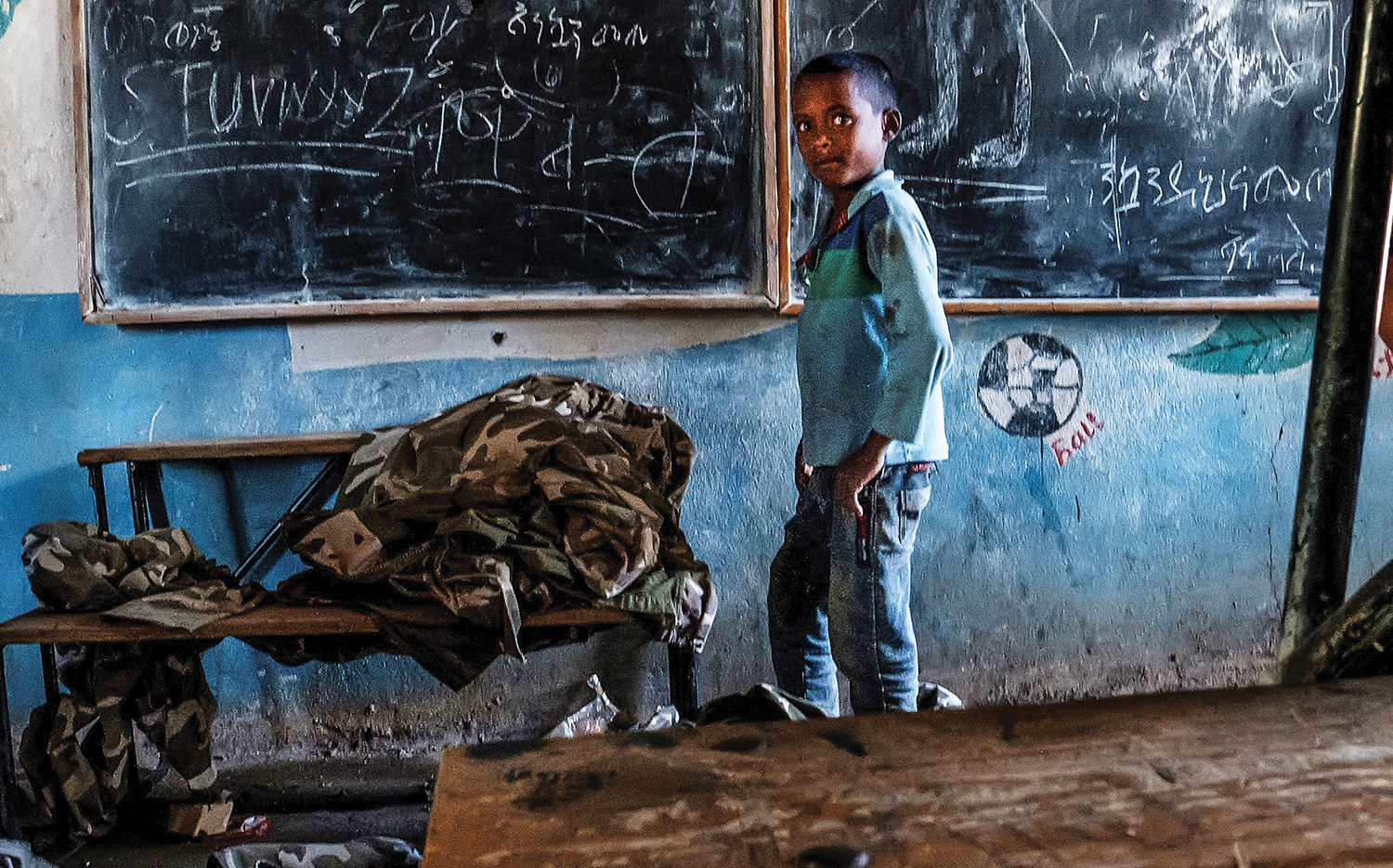 A child looks at abandoned Tigrayan forces uniforms in an elementary school classroom in Ethiopia. Eduardo Soteras/AFP via Getty Images

But in the northern town of Touba, the Salesian missionaries have managed to keep their classical Christian education center open. At the mission’s technical college in the capital, Bamako, teachers used WhatsApp to send lesson notes and collect ­students’ assignments during the pandemic.

For students without smartphones, teachers printed copies of notes and assignments and dropped them off at the school. “The students would pick it up, solve it and return, and the teachers would collect it,” said the Rev. Roméo Salami, a school administrator.

When the government lifted pandemic restrictions, Salami said, some students could not return. The lockdown had cut off their parents’ income, leaving them with no money for school fees. School staff went through the registry to identify absent students, visit their homes, and offer discounts or other incentives to get them back to school.

“It’s a passion,” Salami said. “That’s what pushes us to go around and do everything possible to give a future to the young generation.”