How many people really died of COVID-19 in Wuhan?

Signs of life are returning in China after a two-month lockdown. In Chengdu, rather than being cooped up in homes, citizens can freely enter and exit apartment complexes without a temperature check. Businesses have reopened, including the city’s ubiquitous hot pot restaurants. Pastor Paul Peng of Enfu Church recently went to a restaurant to eat for the first time in months, noting he was one of only a few patrons. The owner commented that business was slow.

Enfu Church continues to meet online, yet some small groups have begun to gather again, where they can “taste a little bit of wonderful fellowship.”

In Wuhan, the epicenter of the coronavirus outbreak, shopping malls have reopened, buses and subways have started running, and by April 8, the lockdown officially will be over and healthy residents will be able to leave the city freely. Schools in some low-risk provinces have reopened as China has delayed the national college entrance exam one month to July.

Yet some wary citizens question whether restarting life—and the economy—is wise as many doubt the official numbers of infections and deaths in the country. For the past few days, the government has reported Wuhan has not seen any new cases and noted the only new infections were from those returning from abroad. Since the outbreak began in December, China claimed it had a total of 82,400 confirmed cases, 3,320 deaths, and 76,600 recoveries. In comparison, the United States reached 236,000 cases and 5,650 deaths on Thursday.

The U.S. intelligence community concluded in a classified report that China had underreported the number of infections and deaths from the virus, according to Bloomberg. For a country that often doctors official numbers to paint a rosier picture of its government, the fact that its coronavirus numbers are off is no surprise. Studies have found China’s actual gross domestic product is about 12 percent lower than its official figures, that its crime stats are wildly underreported, and its official number of voluntary organ donors is impossibly high.

Some of the underreporting may be because lower-level officials need to meet target numbers to keep their jobs or receive promotions. In addition, during the worst of Wuhan’s outbreak, people with symptoms were dying at home without getting tested because of a lack of medical capacity. Some patients died of other diseases as hospitals were overwhelmed with coronavirus patients. Until April 1, China did not count in its case numbers patients who tested positive but remained asymptomatic.

Asymptomatic patients could make up 25 percent of infected people, according to the Centers for Disease Control and Prevention, which explains the rapid spread of the virus. On its first day releasing the numbers, Chinese officials announced there were 130 new asymptomatic cases, and they were monitoring 1,367 asymptomatic patients.

When President Xi Jinping visited Wuhan March 10 in a “victory tour” against the virus, health officials modified the number of infection cases, a Wuhan doctor told Japan’s Kyodo News. He said officials released patients from quarantine even though they still had signs of pneumonia, and they stopped doing blood tests to detect antibodies produced during infection before releasing them. The doctor claimed “suspected patients were released back into society.”

As the official numbers of new cases in Wuhan dropped in mid-March, Cao Jingchao of Wuhan Union Hospital told Financial Times that some hospitals were starting to resume normal functions and transferring coronavirus patients to his hospital. Yet a lack of transparency—doctors aren’t given the patients’ medical charts—made them wonder if those are actually new patients.

On March 15, his hospital took in 100 patients and four days later received 20 more—although the official number of new cases that day was zero, according to FT. Cao suspects some transfers are new cases.

Locals also began questioning the official tally of 2,548 deaths in Wuhan as they saw long lines and large stacks of urns at the city’s funeral homes. Chinese media outlet Caixin reported that on March 26, relatives waited in long lines at Hankou Funeral Home to collect ashes of family members. One woman waited six hours to pick up the ashes of her father, who had died of brain cancer after the hospital sent him home to make room for coronavirus patients.

Caixin also posted a photo of a truck carrying 2,500 urns arriving at the funeral home. The truck driver said he had made a similar trip the day before. Another photo showed staff workers inside the funeral home moving 3,500 urns. Hankou is one of eight funeral homes in Wuhan, leading people to speculate the actual number of deaths from the outbreak could be many times higher than the official number.

When Bloomberg called the eight funeral homes, six responded that they either didn’t have the numbers or couldn’t share tallies. The other two did not answer calls.

Questions also linger over the actual toll of the virus in Xinjiang, where authorities have detained more than a million Uighurs in re-education camps. With reports of the camps’ close quarters and substandard hygiene, many worry that the coronavirus could spread rapidly in the camps and prisons. Information about Xinjiang is difficult to find: The government has clamped down on all communication.

The government claims the region of 24.5 million has only 76 coronavirus cases and three deaths. Schools have resumed, factories are back in production, and construction sites buzz to life, according to The New York Times. 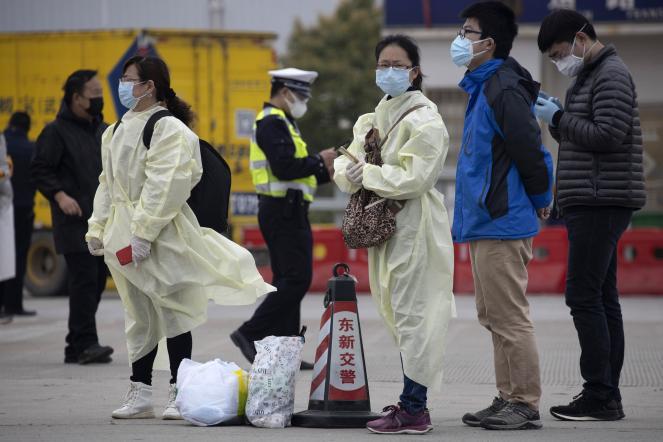 Residents wearing protective gear wait near a toll booth where some are entering the city of Wuhan, which is still under lockdown due to the coronavirus outbreak but have started allowing some residents to return. AP Photo/Ng Han Guan

Back in Wuhan, author Fang Fang wrote her last entry of her “Quarantine diary” about her experience inside the epicenter of the outbreak on March 25. One of the country’s most-read blogs, Fang Fang included in her post 2 Timothy 4:7: “I have fought the good fight, I have finished the race, I have kept the faith."

Censors consistently deleted each of her posts as she spoke frankly about officials’ failings in the early stages of the outbreak. Still, in the time between when she published them and censors erased them, netizens would copy and spread them, some preserving them on Github. Caixin also published her diary entries in its blog section.

In an interview with Caixin, Fang described her anger with the government’s response to the outbreak: “What made me most furious was the delay of nearly 20 days in the outbreak’s early stages that caused such a serious and chaotic situation later on—it was a man-made catastrophe.”