To understand what’s happening to ethnic minorities in Xinjiang and Inner Mongolia, look to Tibet

Mongolians protest against China’s plan to introduce Mandarin-only classes at schools in the Chinese province of Inner Mongolia, at Sukhbaatar Square in Ulaanbaatar, the capital of Mongolia, on Sept. 15. Photo by Byambasuren BYAMBA-OCHIR/AFP/Getty Images

Teachers, students, and parents staged rare protests earlier this month in Inner Mongolia as the government began requiring schools to teach key subjects in Mandarin rather than the Mongolian language. Students will begin taking Chinese language classes one grade earlier and must use new Chinese textbooks for language and literature, morality and law, and history classes.

Fearful the abrupt changes would erode their language and culture, thousands of ethnic Mongols signed online petitions against the new bilingual programs. Students walked out of class, parents pulled their children out of schools, and demonstrators held signs written in flowing Mongolian script outside government buildings and schools.

In response, authorities arrested thousands of protesters and petition-signers, and dispatched heavily armed riot police to protest locations. Officials noted that if parents continued to keep their kids out of school, they would lose their jobs, government subsidies, and the ability to take out bank loans. High school students would be expelled and blocked from taking college entrance exams.

Police went door to door forcing Mongols to sign pledges not to oppose the education program. They detained those who didn’t comply and placed them under police surveillance, according to the Los Angeles Times. Public security bureaus published names and images of protesters, accusing them of “picking quarrels and provoking troubles,” a charge that could lead to five years in prison.

The aggressive move to assimilate Mongols is reminiscent of how the Chinese Communist Party (CCP) has treated Tibetans and Uighurs in Xinjiang—the CCP also replaced their minority language education with Mandarin in the past few decades. While Tibet and Xinjiang have long been considered restive regions, Mongols are seen as the “model minority” living in peace with the growing number of Han Chinese in the region.

The crackdown on Uighur culture and language has spread to what international observers call a genocide: The Chinese government has thrown more than a million Uighurs into reeducation camps, pressed them into forced labor, and implemented a campaign of depopulation through forced abortions, forced sterilizations, and even infanticide. The CCP used many of the tactics now seen in Xinjiang first in Tibet: Xinjiang’s Communist Party Secretary Chen Quanguo, who oversaw the oppression in Xinjiang, was previously the party secretary in Tibet. 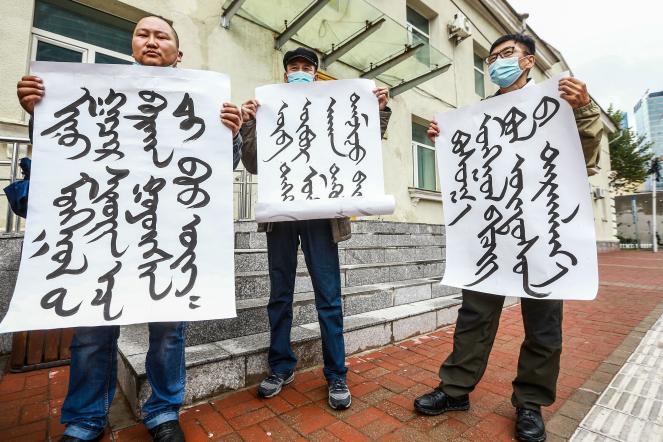 Mongolians protest at the Ministry of Foreign Affairs in Ulaanbaatar, the capital of Mongolia. Photo by Byambasuren BYAMBA-OCHIR/AFP/Getty Images

A recently published book, Eat the Buddha: Life and Death in a Tibetan Town by journalist Barbara Demick, helps explain the CCP’s mindset toward ethnic minorities by profiling the Tibetan community of Ngaba. It’s one of the most difficult places for outsiders to visit, as it is considered the center of the Tibetan resistance, home to the rebellious Kirti Monastery as well as one-third of Tibetan self-immolators.

Told through the personal stories of Ngaba’s residents, the book traces Tibet’s relations with the CCP and the roots of the unrest and distrust that exists today. Chairman Mao Zedong’s Red Army trudged through Ngaba during its Long March in 1934 to escape the Nationalists during the Chinese Civil War. Faced with starvation, they looted monasteries and ate religious statues made of flour and butter, which to Tibetans was equivalent to eating the Buddha.

Once in power, the CCP easily occupied Tibet in 1950 to create the Tibet Autonomous Region, promising to respect Tibetan culture, language, and the Buddhist religion. That quickly broke down as Mao began his disastrous reforms—the redistribution of land, the struggle sessions, the great famine caused by the Great Leap Forward, and the Cultural Revolution.

However badly Han Chinese suffered in those times, Tibetans fared worse as the abuses started earlier and lasted longer, according to Demick. Years before the Cultural Revolution began in 1966, authorities had already destroyed or repurposed monasteries around Ngaba, turning large parts of the population against the CCP as religion was the center of their lives. During the 1950s and ’60s, an estimated 300,000 Tibetans were killed. In 1959, the Dalai Lama and a large number of Tibetans fled to India after a failed uprising.

After Mao died in 1976, the Chinese government provided incentives for Han people to move into Tibet until they outnumbered Tibetans. A new policy in the 1990s criminalized aspects of Tibetan culture and religion including displays of affection for the Dalai Lama. CCP officials entered monasteries to teach patriotic education and banned boys under 18 from joining. As their rules became increasingly onerous at Kirti Monastery, monks began to push back. In 2008 as China was preparing for the Olympics, a peaceful protest began in Lhasa on March 10, the anniversary of the 1959 uprising. Authorities quickly arrested leaders, leading to more protests around Tibet.

Monks at Kirti joined, and soon crowds were gathered in Ngaba holding pictures of the Dalai Lama over their heads. After a violent crackdown, Kirti was placed under siege. The CCP prevented Tibetans from obtaining passports and leaving China. Then in 2009, the first Kirti monk set himself on fire in protest of Chinese oppression. Police arrested anyone with connections to his death, but more Tibetans in Ngaba and around the region started setting themselves on fire. By 2019, 156 Tibetans had self-immolated, with one-third from Ngaba or the surrounding areas.

The Chinese government prevented outsiders from entering Ngaba, cut off communication to the town, and stationed armored vehicles and police officers all over the town. In a preview of the high-tech police state now seen in Xinjiang, authorities covered Ngaba with surveillance cameras, took complete control over online communication, and police used biometrics to track the town’s residents. Fear blanketed the area: One wrong move could lead to jail time or worse. To write her book, Demick had to sneak into Ngaba and interview people from Ngaba in other areas of Tibet, India, and Nepal.

A new report says in the past two years, China has pushed rural Tibetan laborers into military-style training centers and transferred them to work in low-paying industries like textile manufacturing, construction, and agriculture. Tibetans are also forced to undergo patriotic education to dilute “the negative influence of religion” and were required to undergo vocational training to “strengthen [the Tibetans’] weak work discipline.”

Rights groups note it’s unlikely Tibetans can decline their work placements, which are located in other parts of the Tibet Autonomous Region as well as other provinces in China. According to the website of Tibet’s regional government, more than half a million people underwent training in 2020, making up 15 percent of the region’s population.

While the individual situations in Tibet, Xinjiang, and Inner Mongolia differ in historical context and degree, the government’s attitude of containment-at-any-cost and its reliance on cutting-edge technology to stamp out any form of dissent is part of its “second generation” policy to make ethnic minorities more “Chinese.”

“Our way of life is already wiped out,” Enghebatu Togochog, director of the New York–based exile group Southern Mongolian Human Rights Information Center, told The New York Times. “So what is left is just Mongolian language—it is the only symbol left of Mongolian identity. That’s why Mongolians are rising up and protesting these policies.”