Even beyond its 1960s sets and costumes, there’s something old-fashioned about The Queen’s Gambit, Netflix’s new drama about an orphaned girl competing in the man’s world of professional chess.

The hit series isn’t another modern morality play about patriarchal oppression. If it had been, it likely wouldn’t have become popular enough to send sales of chess boards and books skyrocketing. Instead, it’s a surprisingly warm and riveting tale of overcoming hardship and finding community in unexpected places—namely, from the men whom less insightful stories would have turned into villains.

When she first arrives at the Methuen school for girls, 9-year-old Beth Harmon has been let down by every woman in her life. Her mother abandons her through suicide, then her headmistress manages her behavior by feeding her daily doses of tranquilizers. The only person to take real notice of her is the school janitor, a chess enthusiast.

It’s a surprisingly warm and riveting tale of overcoming hardship and finding community in unexpected places.

Mr. Shaibel fosters Beth’s growing intellectual prowess, teaching her a few lessons about graciousness along the way. But Shaibel is hardly the only man she comes to rely on. Her male competitors may dismiss her in the beginning because they’ve never played against a girl before, but none try to shut her out of their field. Eventually, they even set aside their own interests to support hers.

At its core, The Queen’s Gambit offers a Rocky-style tale of achieving success in a meritocracy despite early disadvantages. Though she begins life profoundly underprivileged, Beth’s greatest obstacle is her own self-sabotage, fostered through drinking and drug abuse. Her addictive tendencies may have grown out of the harmful place and patterns she was born into, but she must take responsibility for her choices if she wants a future filled with something beyond bitterness and envy. 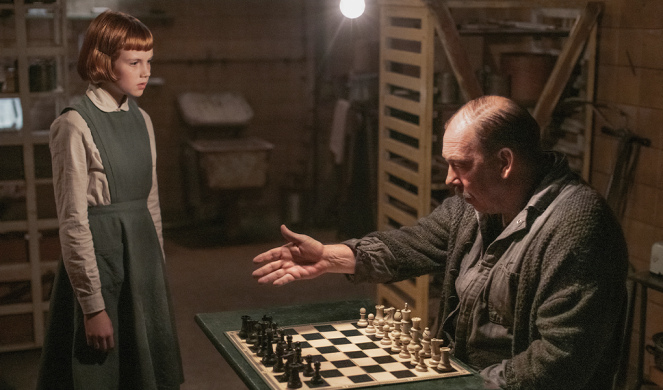 But if the series doesn’t offer feminist, you-go-girl triumphalism or grievance, neither does it overemphasize personal bootstraps. Again and again, the men in Beth’s life come to her rescue, unraveling the extreme self-reliance her mother taught her that left her alone in the world. Without her friends’ support, Beth could never pull herself up to compete on the world stage in Moscow.

The show is not perfect. Characters swear profusely, and some episodes take unnecessary swipes at international Christian organizations. Beth also engages in several emotionless sexual encounters, including, one scene hints, with another woman. There’s no nudity, and all but one are implied, not shown—and that one is noteworthy for how degrading and unfulfilling it is. Once Beth stops the drugs and alcohol, she also stops sleeping around, illustrating the truthfulness of Ephesians 5:18: “Do not get drunk on wine, which leads to debauchery.”

In the end, the show is at least honest enough to show that, sure, sin is fun and can even seem to give you an edge for a while, but ultimately it takes much more than it offers.

If your conscience allows you to tolerate these elements, The Queen’s Gambit is the rare show that is as smart as advertised, and even more engaging.