Ted Lasso is a hit with nearly everyone for good reason

Ted Lasso, a new hit comedy about an American college football coach who inexplicably accepts a job coaching a professional English soccer team, is like nothing else streaming right now.

The show’s warm heart and optimistic attitude have transcended the cultural divide, winning fans from conservative Christian writer David French to the hard-left feminist website The Mary Sue. Maybe that’s because, in a moment when we all seem to be at each other’s throats, it’s calming to watch people learn to have each other’s backs.

At first, you suspect Ted (Saturday Night Live alum Jason Sudeikis) might be a simpleton, a pushover. But as we get to know him better, we realize his gentleness with nearly everyone he meets is actually his strength.

Since Tony Soprano ushered in the age of “peak TV,” antiheroes—violent, snarky, promiscuous—have reigned supreme. Ted, by contrast, wears kindness and fidelity on his sleeve. He is a father figure to the overgrown boys on his team, men who clearly missed strong male mentoring in their lives.

Nate, the stammering and timid kit manager, requires a challenge to step up and assert himself. Cruel, cocksure Jamie needs someone to take him down a peg. There’s no one-plan-for-success-fits-all. When we finally see Ted get tough, it’s all the more powerful because he uses anger so sparingly. His takeoff of former NBA superstar Allen Iverson’s infamous “practice” rant is especially poignant (and hilarious). 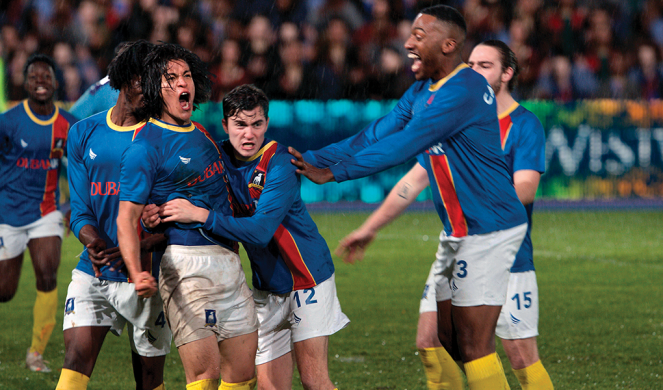 Critics who’ve said the show acts as a warning against toxic masculinity and the importance men place on victory are missing the point entirely. What we see throughout the arc of the story is that our culture is suffering not from too much influence from men, but too little. When Ted starts to tip a little too far over to his softer side, a trusted male adviser has to set him straight. He reminds Ted that winning often does matter, especially when it means building something of lasting value.

Refreshing as Ted Lasso is, there is a catch. Rumor has it Apple TV+ is trying to differentiate itself from other streaming platforms by not featuring sex, violence, and nudity. That is certainly the case here. Where the show hasn’t made concessions is with language. With the exception of Ted himself, the show features near-constant profanity (though it does at least make his different and clearly better approach to life stand out in sharper relief).

So while you may not want to watch it, Ted Lasso should make you smile: Even if we don’t agree on the reasons, when we see a story about good men doing good work, almost everyone still stands and cheers.