Logan Truitt, an Australian paramedic, has seen how some of his co-workers get high: When no one is around, they inhale quick hits of nitrous oxide from dedicated taps in hospital rooms. Doctors use the gas to relieve pain temporarily in patients. But some of Truitt’s co-­workers take deflated air splints, normally used to immobilize broken limbs, and fill them with the colorless gas for a to-go bag of intense temporary euphoria.

Truitt (WORLD agreed to change his name to protect his job) admits that he has himself inhaled nitrous oxide for a quick fix. “But not on the job,” he is careful to add.

Also known as laughing gas, NOS, happy gas, or hippie crack, nitrous oxide (N₂O) has become a recreational drug of choice for some users, including many teens. It made the news in August when convenience stores in New York state started posting hand-­lettered signs stating that buyers of canned whipped cream had to show an ID. New York isn’t restricting pie topping; the misunderstood law instead targets the sale to minors of the N2O cartridges food service companies use to add the “whipped” to whipped cream. State Sen. Joseph Addabbo sponsored the law after he noticed spent ­cartridges littering the streets of his district in Queens.

From dental procedures to pain management, not to mention delicious desserts, nitrous oxide has myriad legitimate uses. The drug itself is not addictive, and the effects are typically brief. But the feeling it produces is habit forming, and extensive use can lead to serious health problems—and, in extreme cases, death. The gas could also be a gateway drug for teens.

“Anything they experiment with is a gateway,” says Debi Nadler, co-founder of Moms Against Drugs. Her son overdosed in 2018, and she works to educate parents about the dangers of children taking any drugs not prescribed by a doctor.

It doesn’t help that the gas is so accessible. The whipped cream chargers, called “whippets” or “nangs,” are cheap and easy to buy online by the hundreds. Illicit users, ­usually teens, dispense the gas into balloons to inhale for about 20 seconds of euphoria per huff. The Substance Abuse and Mental Health Services Administration reports “whip-its” are the most popular recreational inhalant in the United States, with more than 12 million first-time users.

Truitt, the paramedic, says most effects of nitrous oxide aren’t nearly as bad as those of other drugs he sees on the job. “Chroming? That’s 10 times worse,” he says. He means inhaling paint or hairspray fumes. “That has some violent chemicals that cause brain damage.” 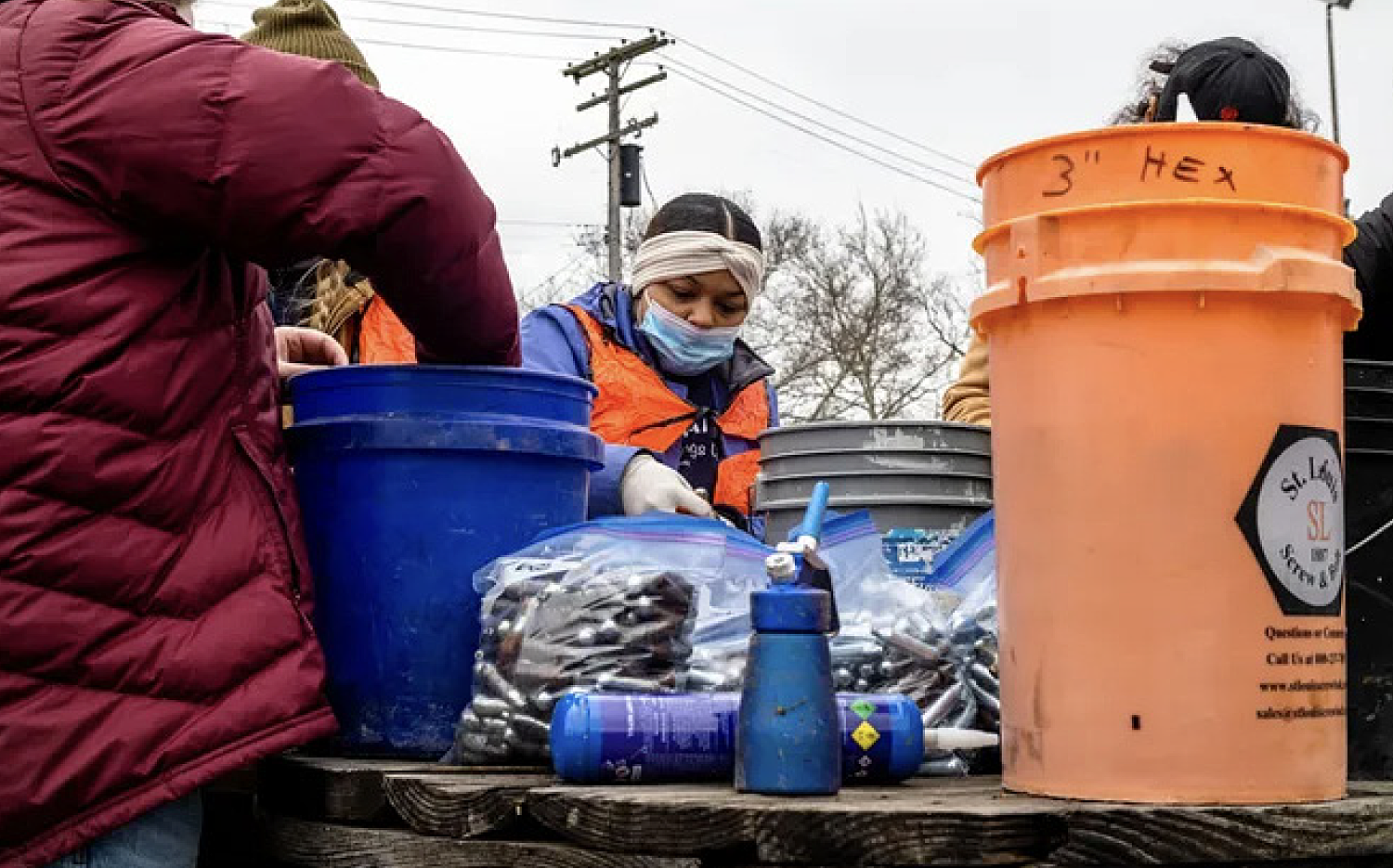 Used whippet containers are collected and counted during a community event in southwest Detroit. Quinn Banks

Still, Truitt says his own medical training included taking nitrous oxide. He wonders if it was a good idea to open that door. The practice of having doctors and dentists experience some of what they put their patients through translates into dental symposiums on the use of nitrous oxide. One advertisement reads, “The full day course will cover the pharmacology of nitrous oxide and communication in pain and anxiety management. … Participants will be given an opportunity to administer nitrous oxide and to experience ­themselves the effects of relative analgesia.”

In the United Kingdom, nitrous oxide is the second-most-used drug after marijuana and the most-used inhalant. After the U.K.’s recent Notting Hill Carnival that attracted a million people, workers cleaning the streets collected more than 3.5 metric tons of nitrous oxide canisters.

But they weren’t the little cartridges. These held almost 80 times more than the small silver chargers, and their large size poses a particular danger to users.

The brain is the only organ that doesn’t store oxygen, so it needs every breath of good air it can get. Nitrous oxide is a rapidly absorbed dissociative anesthetic. Inhaling it replaces the ­oxygen that should go to the brain. One small cartridge delivers four to six breaths of N₂O, which could lead to asphyxia in some users. With the trend of using larger cans, U.K. hospital workers report seeing more long-term nerve damage.

Researchers observe that the user’s hearing, sense of touch, and pain sensations are depressed, even while the user reports feelings of greater clarity and insight—and hallucinations. N₂O can cause nausea and loss of motor skills, and lead to hypoxia, vitamin B12 ­deficiency, tinnitus, collapsed lungs, and occasionally death.

In the United States, laws concerning the sale, possession, and use of N₂O vary by state, but some places have organized campaigns to oppose its use, such as Detroit’s Whippet Wipeout Campaign. Still, with the prevalent abuse of more serious drugs, cracking down on nitrous oxide use may seem to some like ticketing jay-walkers in the midst of a riot.

But N₂O is part of the same culture of chemical escapism. “The only solution,” says Nadler, “is prevention.”