Petook, a rooster, swells with pride when he becomes the father of 12 chicks. He struts and crows as the boy Jesus gently admires his brood, protected under mother hen’s wings. Years later, an older Petook observes with sadness three crosses on Calvary. Jesus, now dying, cries out to Jerusalem, “How often would I have gathered you under my wings.” But three days later nature stirs, darkness turns to life, and Petook cheers as a new chick bursts out of mother hen’s single egg. Houselander’s delicate writing, complemented by Tomie dePaola’s endearing illustrations, make this a treasured Easter classic. (Ages 4-6)

The Tale of Three Trees

Three trees on a mountaintop dream of what they might become. One envisions a treasure box, another a sailing ship, and the last, the tallest tree in the land. Soon, woodcutters chop them down, fashioning one into a feed box, another into a fishing boat, and leaving the last in a lumber yard. Years later the trees’ destinies are fulfilled, but are greater than they could have imagined. The feed box holds baby Jesus, the greatest treasure. The sailboat carries Jesus as He calms a violent storm. The lumber becomes a cross, bearing a crucified King. A beautiful retelling of a traditional folktale that will come to life for generations to come. (Ages 5-8)

The Legend of the Easter Egg

When Thomas’ sister suggests they pretend to go on an Easter egg hunt, he doesn’t know what she means. Then his sister contracts scarlet fever, and he must go stay with a family that runs a candy shop. Thomas helps in the store, but he worries his sister might die. A small chocolate egg gives him hope by reminding him of chicks that burst out with life and of Jesus’ tombstone rolled away at the resurrection. Walburg interweaves Easter traditions like coloring and hiding eggs with the story of Jesus’ death and resurrection and shows readers how a boy finds faith amid trial. (Ages 4-6)

Simon and the Easter Miracle

Simon enters the city market eager to sell his bread, eggs, and wine. Instead, an officer orders him to carry the cross of a prisoner whose crime is “preaching a message of peace.” Simon completes the task while people jeer and weep around him. When he returns to his goods, they are ruined except for a dozen eggs. Three days later, Simon finds those same eggs, not meant for hatching, cracked and open. Then he discovers 12 doves, symbolizing peace, and spring warms his new crops, blessing their growth. Joslin and Luraschi offer a unique depiction of Simon of Cyrene and new life in Christ. (Ages 5-8) 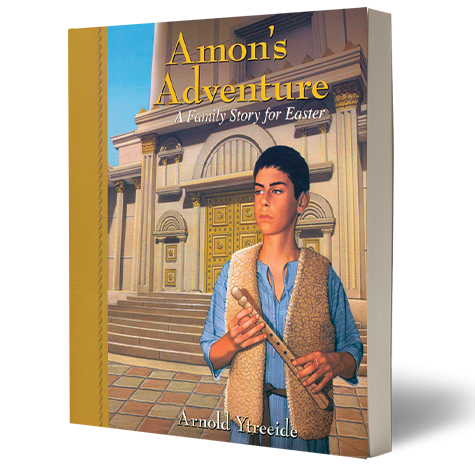 For families seeking a meaningful Easter read-aloud, here are two books worth consideration:

In Arnold Ytreeide’s Amon’s Adventure (Kregel, 2010) a 13-year-old Jewish boy finds his newfound status as a man put to the test when his father faces accusations of theft. As he sets out to save his father, his story intertwines with Jesus’ unfolding ministry, crucifixion, and resurrection. Short, exciting chapters end with reflections to help older children engage with the Easter story in a memorable way.

Scott James’ Mission Accomplished (New Growth Press, 2015) is a two-week family devotional intended for the weeks before and after Easter. Each day includes a Scripture passage, a short reflection, questions, and discussion prompts. Hymns and simple craft ideas appear intermittently. James helps families reflect on Jesus’ last days, death, and resurrection, which are “not far off events that have no meaning for us, but … the basis of our daily life and faith.” —M.J.