Stage Fright (50th Anniversary) by the Band: It’s heretical to say so, but these guys are overrated—not unfunky in their backwoods way or even historically unimportant (they had Dylan’s back and seeded Americana), just less monumental than their larger-than-life reputation. They were really good at what they did, but what they did didn’t evolve: The Winterland act captured in The Last Waltz is essentially the same as the Royal Albert Hall act from five years earlier captured on this deluxe reissue’s second disc. Yet it’s this installment of the group’s 50th-anniversary series that’s the best so far. Why? A resequencing of the original 10 tracks so that the title cut and “The Shape I’m In” get front-loaded and the paeans to wine and sleeping get put to bed at the end.

Chick Corea Plays by Chick Corea: “Plays” is right, in both senses of the word. Not only does Corea tickle the ivories, but he has lots of fun too. There’s no way that anyone attending the intimate 2018 solo shows from which these recordings came (Berlin, Paris, Clearwater) could’ve suspected that in less than three years their genial and talented host would be gone, the victim of late-diagnosed cancer. He improvises portraits for two audience members and duets with two others (Yaron Herman and Charles Heisser). He medleys Mozart and Gershwin. But most impressive of all, he makes the contention that Monk, Evans, Kern, Scarlatti, Chopin, Jobim, and Wonder can’t peacefully coexist on the same program seem utterly preposterous.

1970 by Bob Dylan: These minimally curated New Morning outtakes became an instant collector’s item when they appeared last December as the no-frills, limited-edition, copyright-extending 50th Anniversary Collection: 1970—one sealed copy on eBay went for $2,487.04. This marginally frillier version lists for $19.95 and adds the subtitle With Special Guest George Harrison. Al Kooper, however, looms larger. More than any other component, it’s his Muscle Shoals–like organ playing that situates this music outside Dylan’s previously established stylistic orbits. Speaking of Dylan, he’s in finer voice for at least half of these trial runs than he is on what eventually saw official release. And what eventually saw official release was pretty good.

Steinzeitgeflüster by Frank Oberschelp, Reinhold Westerheide: An album whose instrumentation includes the block flute, recorders, African harp, various drums, seashells, stones, crotales, and temple gongs (as well as earth, water, fire, and air) is probably the last place that you’d expect to encounter Chick Corea compositions. Yet here three of his “Children’s Songs” are. And, rendered as “Stone Age whispers” (Steinzeitgeflüster in English), their mischievously mysterious melodies prove porous enough to accommodate this project’s prevailing spirit of soft Luddism. Not that it’s a tribute to the good old days exactly, but the pieces by Racheal Cogan (one) and Reinhold Westerheide (seven) sound even hoarier than the three from the 14th century. 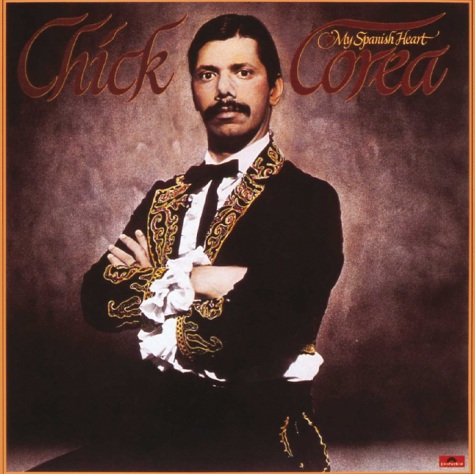 From band member to bandleader to solo star, Chick Corea recorded so many albums in so many styles that identifying one as his best or his most definitive is difficult. The sprightly My Spanish Heart (Polydor) would have to be high on the list. Appearing in 1976, not long after he’d decided that having an audience that understood his music was more important than membership in the avant-garde hall of fame, the album has consistently found favor with Corea’s naysayers and yaysayers alike.

It’s a microcosm of everything into which Corea had thrown himself up to that point, condensed so that only the best bits and few of the pretensions remain. He plays piano, sure (acoustic and electric), but he also plays the organ and four kinds of synthesizers something mean, and with Stanley Clarke and Steve Gadd for a rhythm section (and on “Armando’s Rhumba” Narada Michael Walden as a hand clapper), he makes sure that they dance. Even the cover photo is one of a kind. —A.O.