Chris Wehmeyer and her husband were watching TV on May 24 when the news flashed across the screen. An 18-year-old ­gunman had stormed Robb Elementary School, killing 19 children and two teachers in a small farming community of 15,000.

“It was hard to believe it was little Uvalde, Texas,” said Chris, who lives with her husband Ken in Bastrop, about three hours to the northeast. The next day, they jumped in the car and headed for Uvalde. But first, they picked up Abner, a large golden retriever from Austin.

Abner was one of nine golden retrievers from Oklahoma, Texas, and Colorado that were on their way to the grieving town. The Wehmeyers and their golden charge are part of Lutheran Church Charities K-9 Comfort Dog Ministry, which sends teams of dogs to scenes of tragedy. Another ministry branch, LCC Hearts of Mercy & Compassion, erects crosses for victims. When a catastrophe overwhelms a community, LCC workers and volunteers arrive by invitation from local churches or leaders, meeting pain with a quiet presence.

“The dogs are a bridge,” explains Ken. “If you give me one of these dogs, I can talk to anybody.”

The day after the Uvalde shooting, ­members of the community gathered for a prayer vigil at the Uvalde County Fairplex, a multipurpose stadium that usually hosts rodeos and monster truck rallies. There, the Wehmeyers and other handlers lined up with the dogs as people shuffled in.

The dogs know when someone is in ­sorrow. They don’t offer platitudes, just companionship. Children silenced by trauma often begin to talk while they stroke the silky fur. Parents are relieved to see their child crying or talking because they haven’t been able to get them to express their emotions. “They don’t know they’re petting, but the words are flowing,” said Bonnie Fear, the LCC K-9 crisis response coordinator. “So we see a lot of relief on ­parents’ faces.” 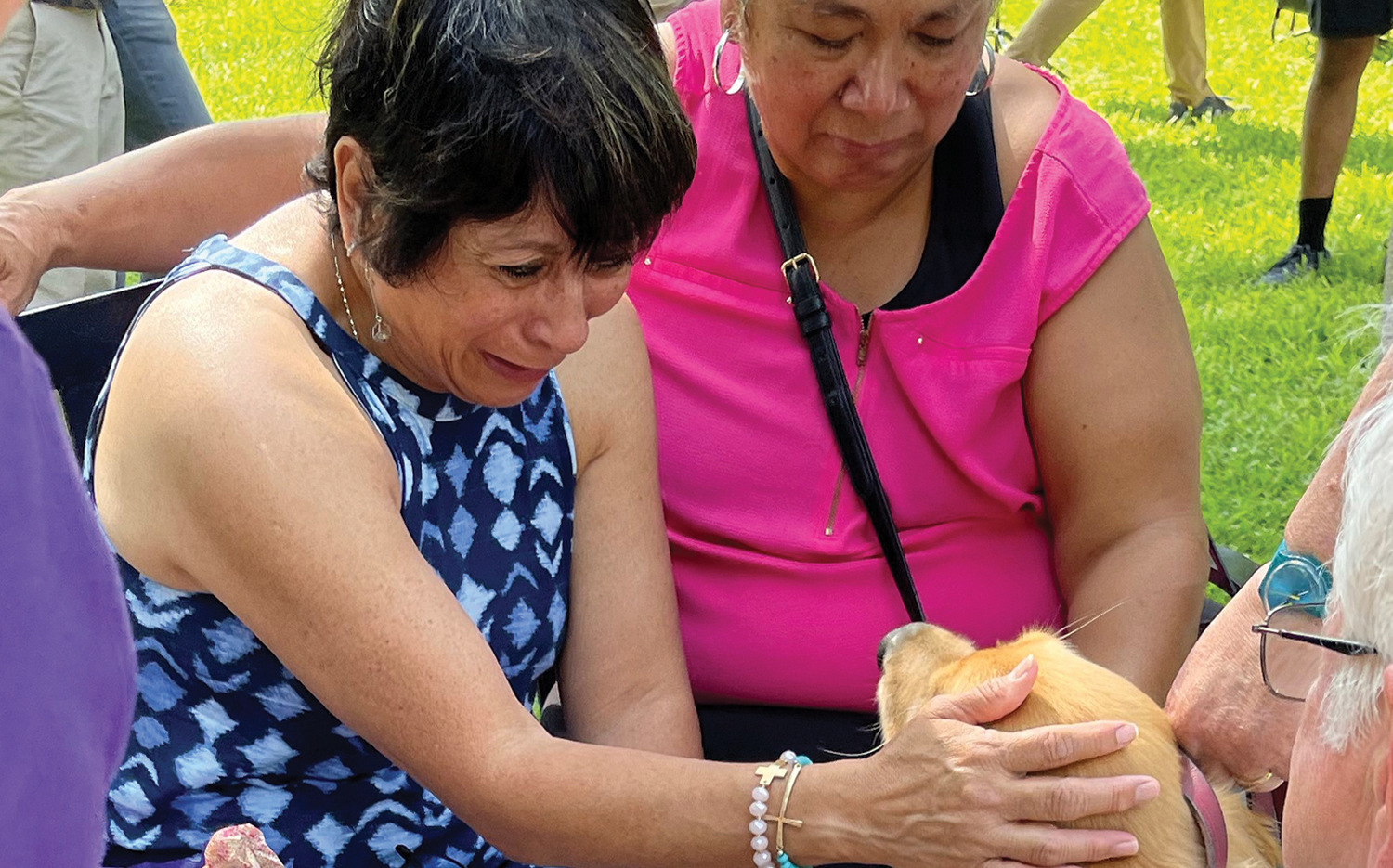 At the Fairplex, as Ken took Abner outside for a drink of water, a man and his daughter walked up to them and asked if they could pet the dog. Ken said yes. As it turned out, the girl, a young teen, had lost her younger sister in the shooting.

The dog handling group also visited with first responders, the FBI, Texas Highway Patrol, and Border Patrol. LCC K-9 spends about two years training the dogs at its headquarters in Northbrook, Ill. Afterward, each dog is assigned a home church. Abner belongs to Bethany Lutheran Church in Austin. He greets churchgoers and sleeps during Sunday sermons. A host family cares for him during the week. When he’s not driving cross-country, he visits nursing homes, schools, and first responders at local police departments and 911 centers. LCC K-9 has over 130 comfort dogs serving in 26 states.

The Wehmeyers joined Bethany Lutheran Church about five years ago. When the retired couple saw Abner, it was “love at first sight,” Chris said.

LCC Hearts of Mercy & Compassion worked with the city of Uvalde to find a central location to place 21 cross memorials for the victims of the shooting. Robb Elementary was guarded by yellow police tape and swarmed with reporters, so the group placed its crosses around a fountain in the middle of town.

The volunteers started with raw lumber and paint. Each cross bore a pale blue heart, the outline of a fish, and a Bible verse. “Once you put a name on that heart, they come alive,” said Jody Lockwood, the Hearts of Mercy & Compassion Uvalde deployment lead. “Every time I do this I have all the names and their stories going through my head.”

A black marker is attached to every cross. Now, notes and prayers are scrawled across the memorials. “Give my mom a hug for me. You are a hero,” says one message written on the cross for Irma Garcia, one of the two teachers who was killed.

The Wehmeyers helped assemble the crosses. Local residents helped unload the trucks. The offerings at the base of each memorial—flowers, stuffed animals, candles, toys—grew until the crosses were barely visible. After installing the crosses, handlers in royal blue polo shirts stood by silently with their comfort dogs.

Uvalde children who started school again on Sept. 6 didn’t go back to Robb Elementary. Some attended other ­public schools, while parents of others chose to homeschool them or enroll them in private schools. Many children were afraid to step back into a classroom.

Ten dogs and 20 handlers returned to the town to greet children who did return to classrooms. The Wehmeyers took Abner to Uvalde High School, where students petted the animal in the hallway between classes.

While handlers like the Wehmeyers hold leashes, they’ll also listen and pray. “We’re trained to listen, have empathy, and not talk a whole lot,” said Fear. “We want them to express their grief or their joy. We want them to remember that someone loves them and prayed for them.”

Addie is a WORLD reporter who often writes about poverty fighting and immigration. She is a graduate of Westmont College and the World Journalism Institute. She lives in Austin, Texas, with her husband, Ben.