Australian universities’ dependence on Chinese students has led to the stifling of academic freedom. The Land Down Under is starting to push back

“I know where you live. I’m going to break in your door and get you,” read a Facebook message in Chinese sent to dissident Wu Lebao in 2020, he recalls.

At the time, Wu was studying mathematics at Australia National University in Canberra. He reported the threat to city police, but they refused to get involved since the threat was never carried out.

Threats from Chinese Communist Party (CCP) supporters and harassment from online trolls are weekly occurrences for Wu as he speaks out about Beijing’s human rights violations. Now 38, Wu grew up in Anhui province in eastern China. His first anti-government activity came in the form of a blog post in 2008 questioning whether Tibet really belongs to China. Authorities threatened to remove him from his university. In 2011, he visited Chinese dissident artist Ai Weiwei and posted Twitter posts critical of Beijing, including one that read “if you hold jasmine in your hand the police will arrest you.” Chinese police arrested him on suspicion he was leading a Chinese pro-democracy Jasmine Revolution. Wu denies the claims.

He spent more than three months in prison, then another year in house arrest before leaving China for Australia to seek refuge. Although he now has Australian citizenship, he says that hasn’t protected him from the long reach of the Chinese government.

Due to close economic ties between China and Australia, Chinese influence in the Land Down Under has increased in the past decade, clouding politics, education, and the country’s Chinese-language media. One of the clearest examples of this is seen on Australian campuses as Chinese intimidation toward its own citizens has resulted in fear, self-censorship, and a stifling of academic freedom.

Yet Australia is starting to push back and upsetting Beijing in the process. New laws requiring foreign agents to register led to China’s imposition of tariffs and restrictions on Australia’s exports of beef, lamb, wine, and barley. Tensions rose further last year after Australia called for a probe into China’s role in covering up the origins of COVID-19. China responded with tariffs on coal, lobster, and timber and with jabs at the country in state media. To bolster its national security, Australia brokered a three-way security agreement with the United Kingdom and the United States in September to buy nuclear-powered submarines.

Wu sees Australia’s newfound resistance to China as a good thing. “Finally, Australia took the threat from China seriously. They are starting to care about human rights not only in China but also in Australia.”

DIPLOMATIC RELATIONS between Australia and China began in 1972, and in the ensuing years their interdependence grew. Australia contains many of the raw materials China uses, and China manufactures many of the low-cost goods Australians consume. China is Australia’s largest two-way trading partner, receiving one-third of Australia’s total exports.

For instance, Melbourne University collected an estimated $375 million from its Chinese students, who make up a quarter of the student population. That money helps fund university research and improve their global rankings, which in turn draws more international students.

Australian universities are careful not to upset their source of revenue, which has led to a stifling of academic freedom on campus. Charlie Zhang, a 21-year-old Chinese Australian university student in Melbourne, said he only speaks to trusted colleagues about his views on China. He chose a major in science to ensure his class discussions won’t veer into China’s policies. (WORLD is using a pseudonym to prevent reprisals from the Chinese government)

Zhang sees fewer and fewer professors willing to talk about China’s sensitive issues, to protect both themselves and their Chinese students. Some scrub references to the 1989 Tiananmen Square massacre from their classes or avoid talking about Hong Kong or Tibet. Students who speak negatively about the Chinese government are often subject to harassment, threats, and doxxing—having their personal information broadcast on social media so others can harass them.

Zhang says Canberra should have been concerned about how China treats its citizens years ago. Australians previously thought the issues were restricted to Chinese on the mainland, “but now they understand it’s an international topic.”

In June, Human Rights Watch interviewed pro-democracy students and academics from China and found that they alter their behavior and speech to avoid threats, harassment, and retaliation on their families.

“The majority of students who experienced harassment didn’t report it to their university,” report author Sophie McNeill said in a statement. “They believe their universities care more about maintaining relationships with the Chinese government and not alienating students supportive of China’s Communist Party.” Administrators sometimes ask professors to keep from publicly discussing China and discouraged them from holding public China-related events. Some of the faculty included in the study admitted they self-censor while discussing China in classes, even though they are not necessarily asked to by their administrators. 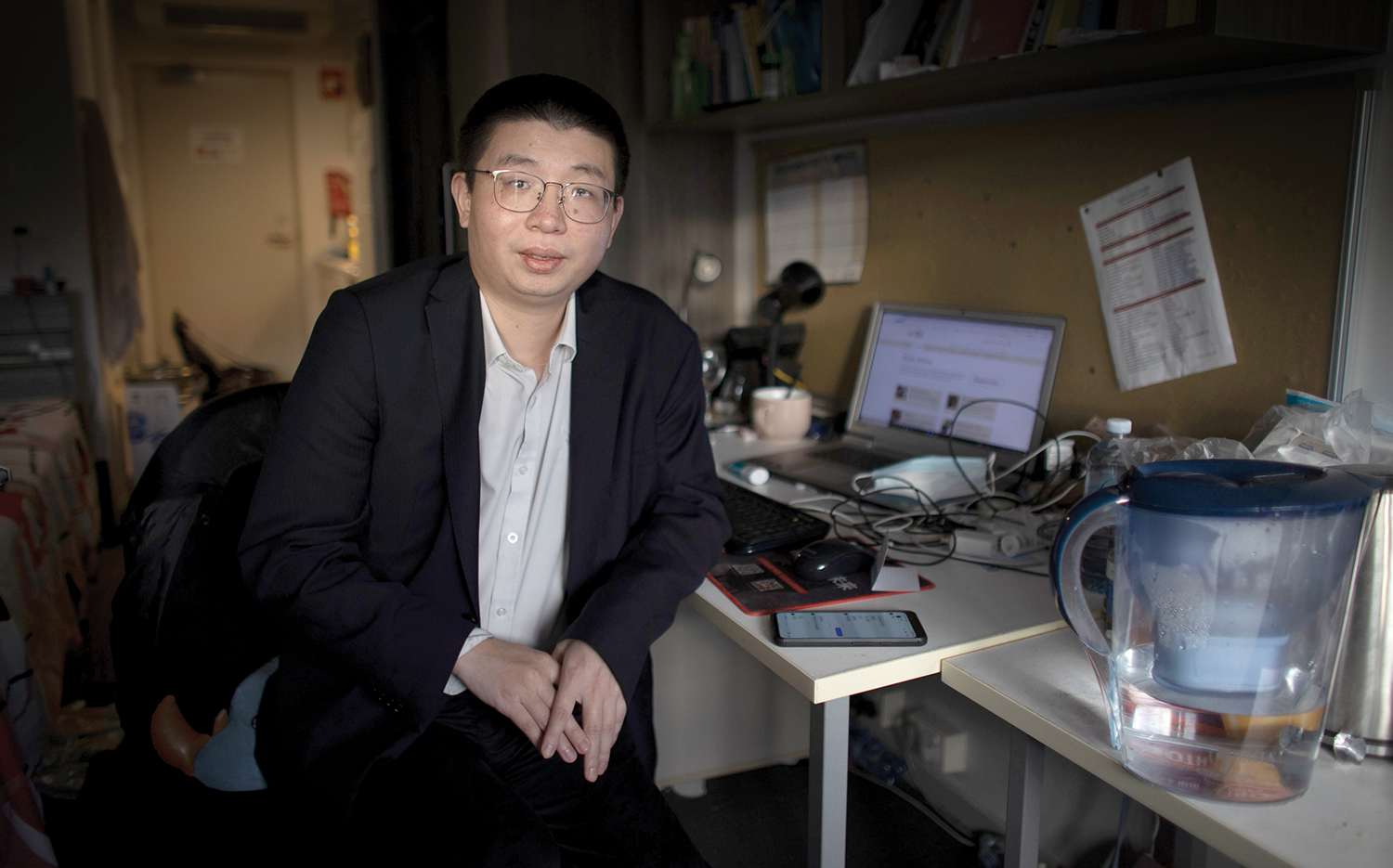 Wu Lebao at his student accommodation at the Australian National University in Canberra. Mike Bowers/Guardian Australia/Eyevine/Redux

BEYOND CHINESE student tuition dollars, wealthy Chinese nationals in Australia are also using their donations to influence university campuses. For instance, billionaire property developer Huang Xiangmo donated $2.6 million to Western Sydney University in 2015 to establish the Australia-China Relations Institute. It replaced the China Research Centre, which had been critical of China. Huang has since been banned from Australia as a national security threat because of his close ties with the CCP.

Keeping tabs on the students’ speech and activities is the Chinese Student and Scholars Associations, which receive guidance from Chinese embassies and consulates, according to a 2018 report by the U.S.-Chinese Economic and Security Review Commission. Beyond threats and online name-calling, some students also face repercussions back home in China.

For instance, in 2019 Sarah Yang (name changed for her protection) started a Twitter account to go public with her support of Hong Kong’s pro-democracy protesters. A Chinese grad student at a Sydney university, she also began organizing political rallies and protests against China’s takeover of Hong Kong. In April 2020, she received a call from a Chinese police officer who was with her father. The officer said in a recorded video call, “Although you are [in Australia], you are still governed by the law of China, do you understand?”

Her father, a CCP member, begged Yang to give them her Twitter password, delete her account, and surrender herself to the Chinese police. She refused. In July 2020, she said two men arrived at her parents’ home to install a “TV box” even though her mother insisted the network was working fine. When they called their cable company, they were told the workmen had not come from their business. The box is still in her parents’ home.

Yang has been called a traitor and received death threats by Chinese nationalists for mocking Chinese President Xi Jinping and holding rallies in memory of Li Wenliang, one of first the doctors to warn the world about COVID-19. She said many students have the same opinions she does but are afraid to speak out because they don’t know who is watching. Any perceived opposition could mean danger to their families or punishment if they return to China.

Yang fears what will happen if she writes her master’s thesis on Chinese political ideologies as “Chinese money and CCP members are everywhere in Australia,” she said. The prospect of not having her thesis accepted has caused her to reconsider her topic. Yang is currently on a student visa and is contemplating getting her Ph.D. in Australia to buy more time outside China. 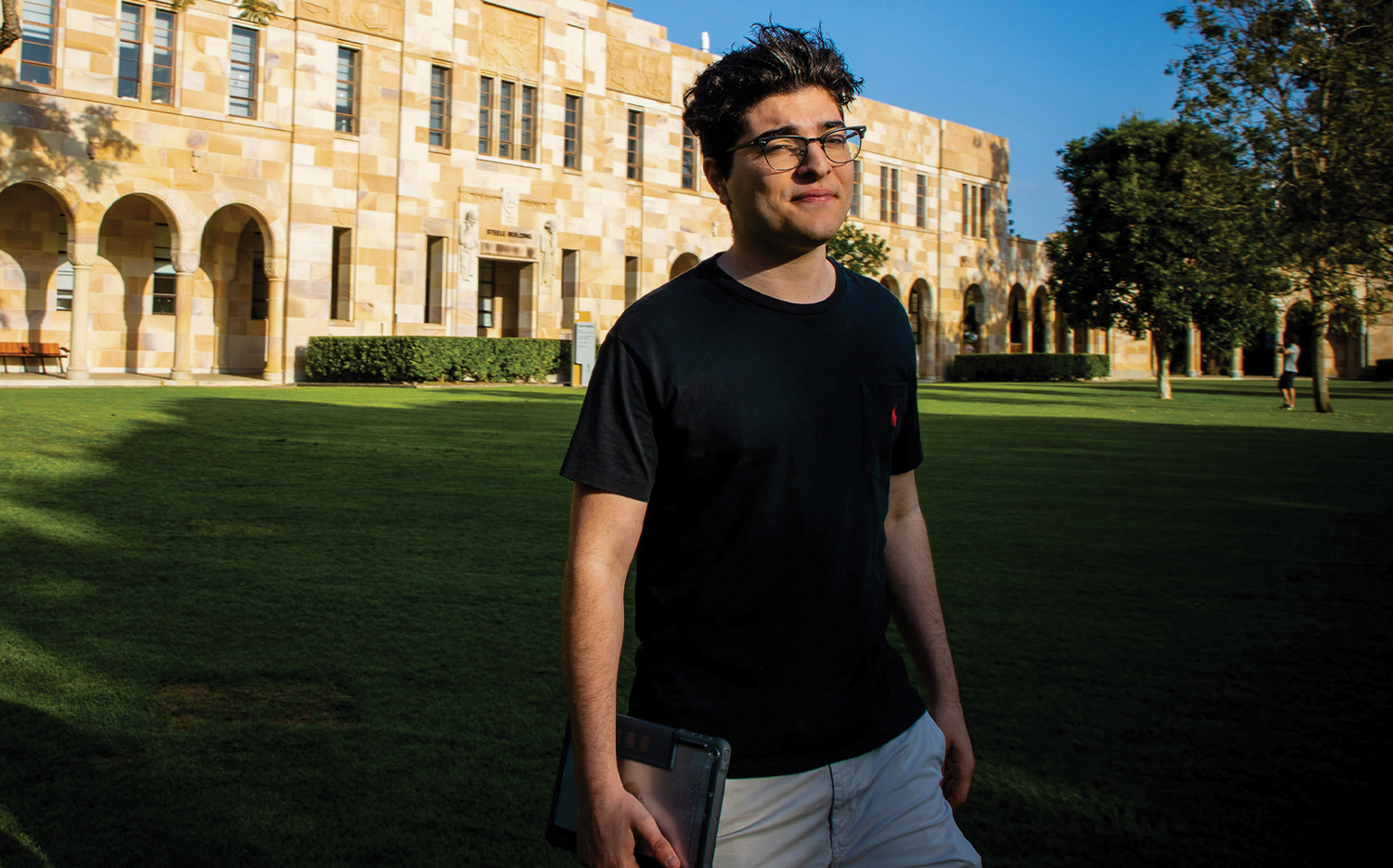 Drew Pavlou on the campus of the University of Queensland in Brisbane. Patrick Hamilton/AFP/AFP via Getty Images

Kevin Carrico, senior lecturer in Chinese Studies at Monash University in Melbourne, said when he first moved to Australia from the United States in 2016, he was surprised by Australia’s naïveté in holding Confucius Classrooms at primary schools. But troublesome aspects in China’s policies have become harder to deny, and it shows in Australia’s recent attempts to distance itself from its largest trading partner.

The Australian government also recognizes the need for its universities to be safer for students critical of the CCP. A new draft law could see academics and students receiving training to recognize and report foreign interference threats. But university leaders have pushed back against the guidelines because they would also require academics to disclose any foreign political party membership in the past 10 years.

Anti-CCP student activism is also moving from campuses to the political arena. Drew Pavlou, a 22-year-old student at the University of Queensland, recently created a political party to run for a seat in Australia’s Senate. He made headlines after his school, which has close ties to China, tried to expel him for his critical remarks against China and for organizing a sit-in protest in support of Hong Kong pro-democracy protesters in 2019. Several hundred Chinese nationalists showed up to the small protest and a scuffle ensued, in which Pavlou said he was assaulted twice.

But China’s consul general in Brisbane, who is also an adjunct professor at the university, called Pavlou’s protest “anti-China separatist activities” and praised the counterprotesters. Since then, Pavlou’s immigrant Cypriot family received death threats. His parents asked him to move out of the house to protect his siblings. Meanwhile, the university issued a 186-page document of allegations against Pavlou detailing why he should be expelled, including that he damaged the school’s reputation. One of his offenses meriting expulsion: using a marker in a campus store and putting it back on the shelf.

Pavlou received a reduced sentence of six months’ suspension instead of expulsion and returned to school this fall. The time off gave him space to consider the broader reasons to stand up for oppressed people like the Uyghurs and Hong Kongers. “It’s about human dignity,” he said. He remembers as a child learning about the Rwandan genocide. “How could people know what was happening and not do anything? I decided then that I wouldn’t be someone who just stands by.”

Australia’s current shift in stance toward China challenges the status quo of the past decades. Carrico believes it’s a change for the better. “No matter how much you give Beijing, the party will always want more. The moment you back away and consider one’s own rights and needs, Beijing will consider that unforgivable.”