For Baby Boomers, few sounds capture the spirit of America like the harmonizing voices of the Beach Boys. And in the late ’60s and early ’70s, Carl Wilson, Mike Love, Al Jardine, Bruce Johnston, Dennis Wilson, and Brian Wilson were working harder than they ever had to put their voices to captivating use.

The new five-disc box Feel Flows: The Sunflower and Surf’s Up Sessions 1969-1971 (Capitol/Brother/Universal) proves that they labored not in vain.

Regarded as avatars of good, clean fun at a time when many of rock’s hippest acts were aiming for bad, dirty, and dangerous, the Beach Boys had hit a commercial ebb.

They also found themselves increasingly unable to depend on Brian Wilson (whose well-documented psychological unraveling was already under way) to provide them with the kind of music that would reverse their downturn. The others stepped up. 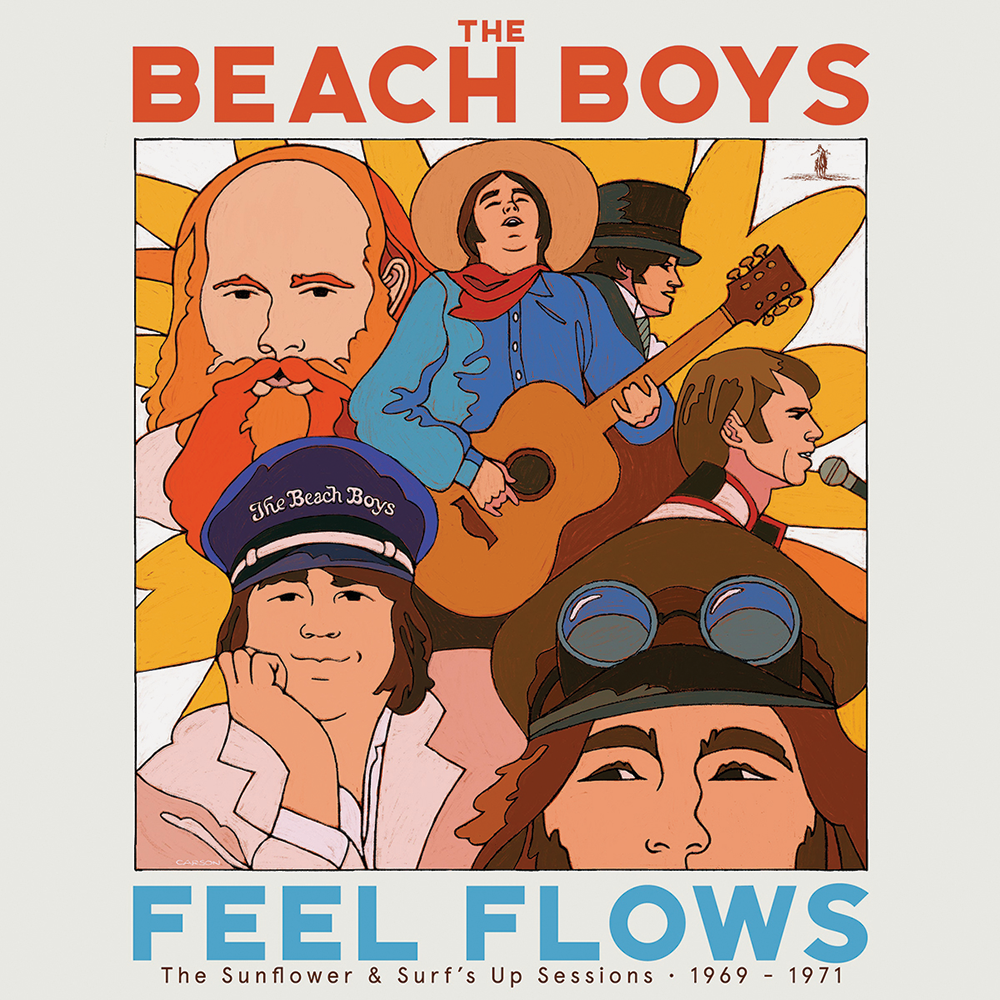 The first fruit of their newly democratic labor was Sunflower. Aesthetically, it contends for their best long player ever. It yielded no hits, but in the 51 years since its release, the structurally ingenuous “This Whole World,” the achingly tender “Forever,” the panoramically meta-pop “Add Some Music to Your Day,” and the irresistibly dreamy “Our Sweet Love” are among the group’s most beloved deep cuts.

Commercially, it landed with a thud. Convinced that they’d been harmonizing up the wrong tree, the Boys hired former DJ Jack Rieley as their manager.

The first Beach Boys album recorded under Rieley’s auspices, Surf’s Up, found them swapping the timeless for the timely, singing protest songs that endeared them to the moment but that now sound embarrassingly contrived.

A few of the apolitical tracks showed signs of the old Beach Boys magic—the harmony-drenched “’Til I Die,” the prog-folky “Feel Flows,” and the title cut (leftover from the unfinished album Smile). And Bruce Johnston’s “Disney Girls” was new Beach Boys magic at its most ethereal. But the album as a whole came off as a hodgepodge.

Feel Flows finally makes it easy to appreciate the quality of that hodgepodge’s music. The instrumental-track-and-backing-vocals-only versions of Surf’s Up songs on Disc 4 reveal a fascinating intricacy of construction. Scraped of its lyrics and Rieley’s creaky guest vocals, the moribund “A Day in the Life of a Tree” could almost pass for a hymn.

Meanwhile, many of the tracks that either never saw official release or wouldn’t appear until later on other albums or compilations are—in their stereotype-defying variety—more revelatory yet.

For one brief, shining moment, the group’s ability to generate one new pet sound after another seemed as endless as the summer of their dreams.