Buying and selling churches in Australia

Small, rural church buildings without congregations are being sold to support growing churches

A 1904 Presbyterian/Uniting Church building now renovated into a home. Photo by Amy Lewis

The blue stone church was built in 1854 but has been empty for eight years. A full-color, 6-foot-high “Auction” sign sits in front of Batesford Presbyterian Church on a dirt road leading to a vineyard. Bannockburn Presbyterian Church is selling the Batesford and Anakie Presbyterian church buildings. The three congregations used to share the same pastor on alternating Sundays, but the two smaller churches held their last services in 2014. The buildings go to auction with a residential real estate agent on April 9.

The sale of church buildings in Australia follows trends among sellers and buyers. Rural church buildings are being sold to assist growing city churches. Buyers are snatching up the buildings at record prices to renovate into homes, community halls, galleries, and sometimes churches.

Australia’s unique church history and present mindset about Christianity adds a new dimension to what would otherwise be a mundane story repeated in the U.S. and elsewhere about repurposed church buildings.

In 1836, the Australian Parliament passed the Church Act, providing government subsidies for church construction and pastors’ salaries, and effectively breaking the Anglican monopoly on churches. The 1851 Gold Rush in Victoria brought wealth to the region, and church buildings sprang up almost overnight. A drive through Australia’s countryside today turns up blue stone, brick, or weatherboard-sided churches in nearly every small town.

In 1977, out of a desire to show church unity, many Presbyterian, Methodist, and Congregational churches formed the Uniting Church in Australia. The joint congregations occupied the best church building in each town and sold the others.

Now, with people moving to urban areas and cultural Christians choosing “no religion” on surveys, congregations in villages are finding it hard to maintain and insure their aging church buildings.

Since 2018, nearly 30 church buildings have been sold each year in the state of Victoria. People buy the older buildings to preserve the history or because it’s well built and has acreage.

Chris Ambrose is a former Uniting pastor. He and his wife Mary found their ideal home with north-facing windows, some history, and lots of wall space for their books when they bought an 1886 Bible Christian Church/Uniting Church building in remote Irriwillipe.

The former worship building is surrounded by fields once filled with farms of potatoes and dairy cows. Now a red bull named Trevor reigns over a large beef farm. The wooden church was also the community hub but closed soon after the congregation’s 100th anniversary.

“There’s no point in keeping a church open simply because it’s a church,” says Ambrose. “I’m sad about all the local churches closing. History matters, but if people aren’t worshipping there, it’s just a building.”

Three miles down the road, Colin and Angela Carter live in what locals call the “Notorious Blue Church” because of its proximity to a dangerous intersection on the way to the Great Ocean Road. “It was cheap, derelict, and exactly what we needed,” says Colin of the 1904 Presbyterian/Uniting Church building.

The Carters see themselves as caretakers and want to honor the “church feeling” even while they host the parody religion of the Flying Spaghetti Monster and have “pilgrims” pose with pirate hats in front of their building and sign.

Others have bought churches to hide out from COVID-19 or as a second country home.

Richard Wilson hasn’t bought a church building, but as church planting evangelist for the Presbyterian Church of Victoria (PCV), he has plenty of experience with them. He grew up in the bush. His family would travel almost 20 miles to a strong church with children’s ministries rather than go to a closer church with only a few older congregants. 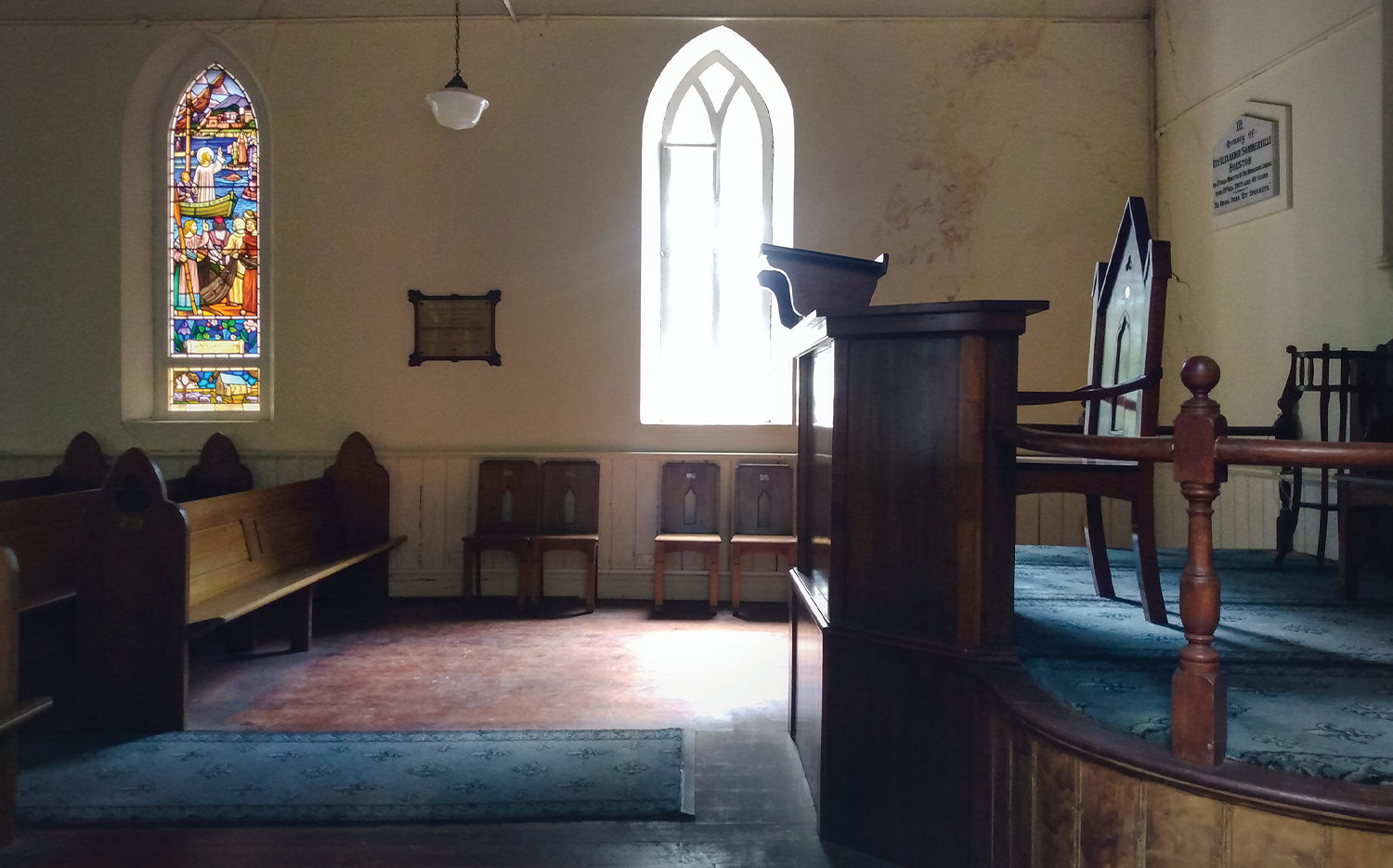 Interior of the closed Batesford Presbyterian Church that was auctioned off April 9. Photo by Amy Lewis

Those struggling churches are now closing their doors. Roy Morgan reports that the percentage of Australians describing themselves as “Christian” dropped from 68 to 44 percent between 2003 and 2020. In the same period, those who say they have no religion grew from 26 to 45.5 percent.

“It breaks my heart to see churches being used as dance halls and homes,” Wilson says, “but the reality is, Jesus died for people, not buildings.” Even though people have strong personal ties to church buildings, the aging buildings are becoming a liability. Meanwhile, analysts expect Australia’s cities to grow exponentially. “We need to be thinking hard about getting churches to where the people are,” says Wilson.

While “For Sale” signs outside church buildings might seem to confirm mainstream media’s message that Christianity is dying, Cameron Garrett, clerk of the Gippsland Presbytery in the PCV, says that though membership has been cut in half, actual attendance has grown. Churches today are arguably stronger.

According to McCrindle researchers, at least 64 percent of Australians say they would likely attend a church service if personally invited by a friend or family member. Wilson found that openness when he knocked on 2,000 doors in his new neighborhood. The people who opened 1,198 of the doors were encouraging and positive. Some showed up at the church plant. Only two people were negative.

There’s a wooden church in a suburb Wilson thinks would be ideal for a church plant. “The building would fall over if you leaned on it,” Wilson says, but he has hopes of planting a new church and rebuilding on that same plot of land.