LIFEPLAN: Northeast Hope Awards winner is a pregnancy center that focuses on holistic Biblical sexuality as well as providing services to women

Breanna Brittain (right) and her son Mark meet with her friend and consultant Teri Stark during her weekly visit to LifePlan. Darrell Goemaat/Genesis

Breanna Brittain carries her son with her right hand. In 2017, doctors amputated her left hand. An industrial machine that resembled a bicycle wheel at the fiber factory where she worked shredded her tissue and took off most of her fingers.

After the accident, Brittain didn’t want to get out of bed. She considered suicide and was admitted to a psych ward for five days. A few months later, she found out she was pregnant. As Brittain, 30, drove down East Main Street in Niles, Mich., she noticed a small, sage-green Victorian house with white trim. White pillars supported a shaded porch surrounded by a wrought-iron fence and a well-kept lawn. A white sign held up by a purple, wooden frame read “LifePlan” in large, purple letters and underneath: “you + baby + family.”

“I need a life plan.” Brittain thought. She decided to call.

THE CENTER SITS on one of the main thoroughfares in Niles, a quiet town of about 11,600. The closest airport is 30 minutes away in South Bend, Ind. Four countries—Britain, Spain, France, and the United States—have all laid claim over the centuries to the city that now has the nickname the City of Four Flags. From 1820 to 1865, slaves traveling the Underground Railroad stopped in Niles on their way to Canada. Now, the house on East Main is a station for women and their families escaping what seem like impossible situations.

LifePlan is one of nearly 3,000 pregnancy centers around the United States. But many crisis pregnancy centers focus their efforts on “you + baby” and unintentionally sideline a key component of effective compassion: strengthening the most fundamental community—the family. LifePlan offers traditional pregnancy center services, but staff and volunteers aim to provide women with long-term support by grounding the whole family on a foundation of Biblical sexuality.

In 1984, an abortion center opened in Niles. A group of churches responded by opening the Pregnancy Care Center of Niles in 1985. It offered basic pregnancy services. Finances were shaky, and the center had six directors in the span of 10 years. The abortion center closed in 2012, and now the closest one is in South Bend. In 2017, the organization changed its name to LifePlan to help change the assumption that a pregnancy center is only for women.

When you walk into LifePlan, the wooden floor creaks underneath scattered rugs. Lisa Smith, the volunteer coordinator, isn’t sure how old the house is but thinks it was probably built around 1895. House servants once used the steep back stairway. But the inside of the center looks freshly painted and feels like a home. Worship music plays in the background. A meticulously organized boutique bursts with racks of baby clothes, and white shelves hold other baby items. 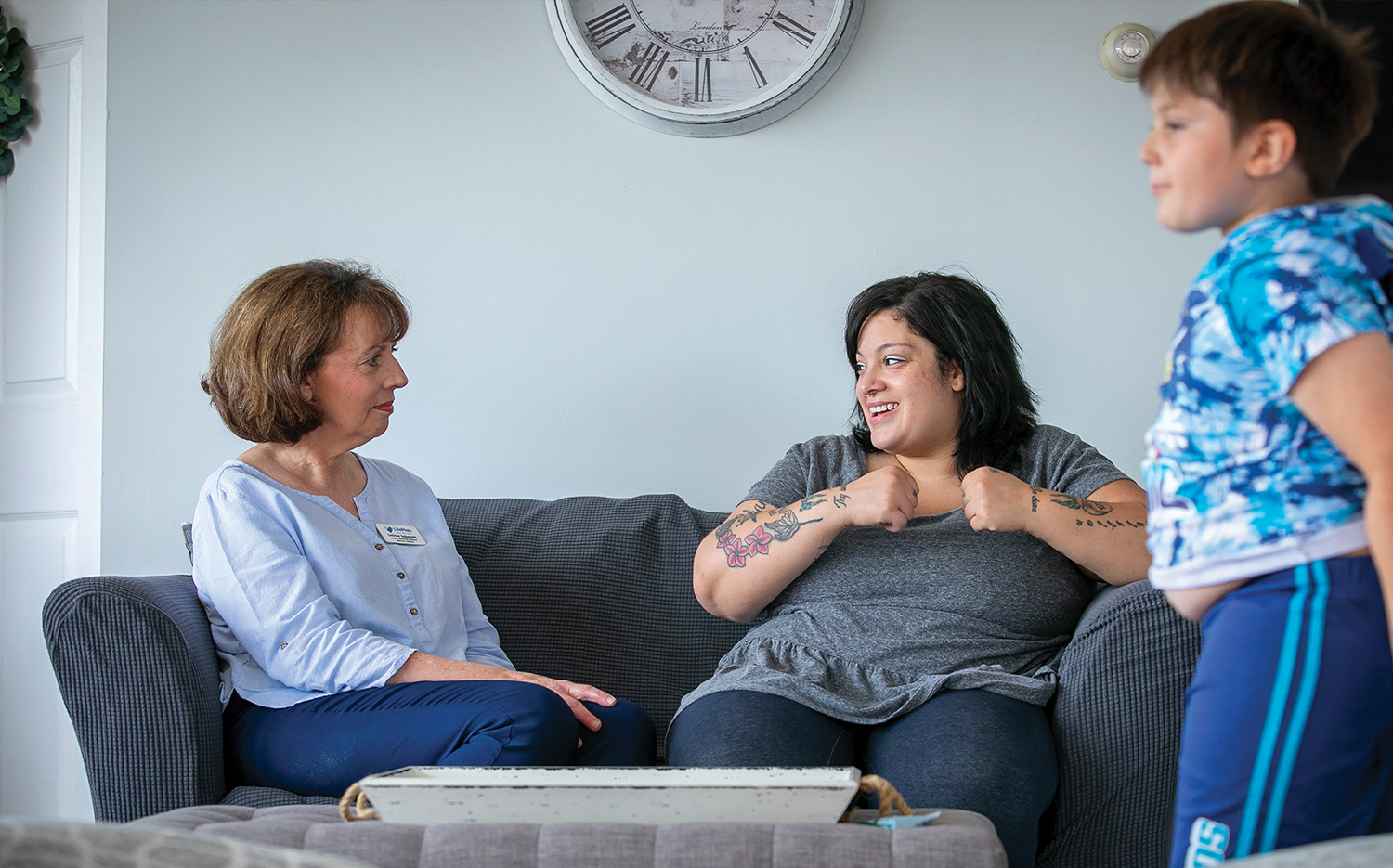 LifePlan’s mission statement reads: “We exist to spread the gospel by helping people choose life and live a Hope filled life.” On the ground, this looks like equipping volunteers from various Christian denominations to understand the gospel and discipleship with two trainings: “What Is the Gospel” and “How It Forms Us.” Staff and volunteers share the gospel with clients on a case-to-case basis. At the end of a session with a client, consultants ask permission to pray. Every family gets The Jesus Storybook Bible since every story ties back to the gospel. They hope the parents will hear the gospel as they read to their kids.

At their first meeting, the consultants try to get to know their clients and encourage them to come back the next week. The Life Matters curriculum is divided into three phases of four classes from BrightCourse. The consultant helps customize the curriculum for the client. The videos range from how to keep your house clean to staying in your budget to what to expect from a newborn. Though not all the videos are explicitly Christian, they are based on Biblical values. Consultants can use companion discussion guides that incorporate Scripture when they work with a client.

LifePlan placed Brittain with Teri Stark, 57, one of the center’s consultants. They met once a week. Brittain vented about her stress and her doubts about keeping the baby: “I was really leaning toward abortion.” Stark listened. Brittain simultaneously dreaded and wanted her prayers. She was raised in church and had grown to resent God after the accident. Meeting with Stark slowly broke down her walls. Stark didn’t tell her what to do but offered suggestions, and they brainstormed next steps together.

Volunteers have their own stories of God’s redemption. Stark had her first son before she was married. Like so many of the women she sees, she was scared. “I didn’t even know the gospel or know Jesus died for me,” she said. Her baby was born dangerously early, and she begged God: “If you’re real, let my baby live.” Her son died, but God brought some Christians into her life. “God did a total miracle in my life,” she said. Now she has four children and seven grandchildren.

LifePlan offers ultrasounds on Thursdays and tests for sexually transmitted diseases on Mondays and Thursdays. Women can get a pregnancy test anytime.

But LifePlan offers more than services. The organization believes prevention is key to restoring holistic Biblical sexuality. Last year, LifePlan partnered with a church to host its ReMade youth conference that helps teenagers understand sexuality from a Biblical perspective. Every year, the organization puts on an anti-pornography campaign. LifePlan also speaks about prevention in two public schools: Niles New Tech and Eau Claire Middle School. The group conducts abstinence training and brings in its medical doctors to speak to the kids. The organization welcomes people to come in even if they don’t have children. Some people come in for relationship advice or STI testing, and LifePlan staffers see that as an opportunity to explain Biblical sexuality. 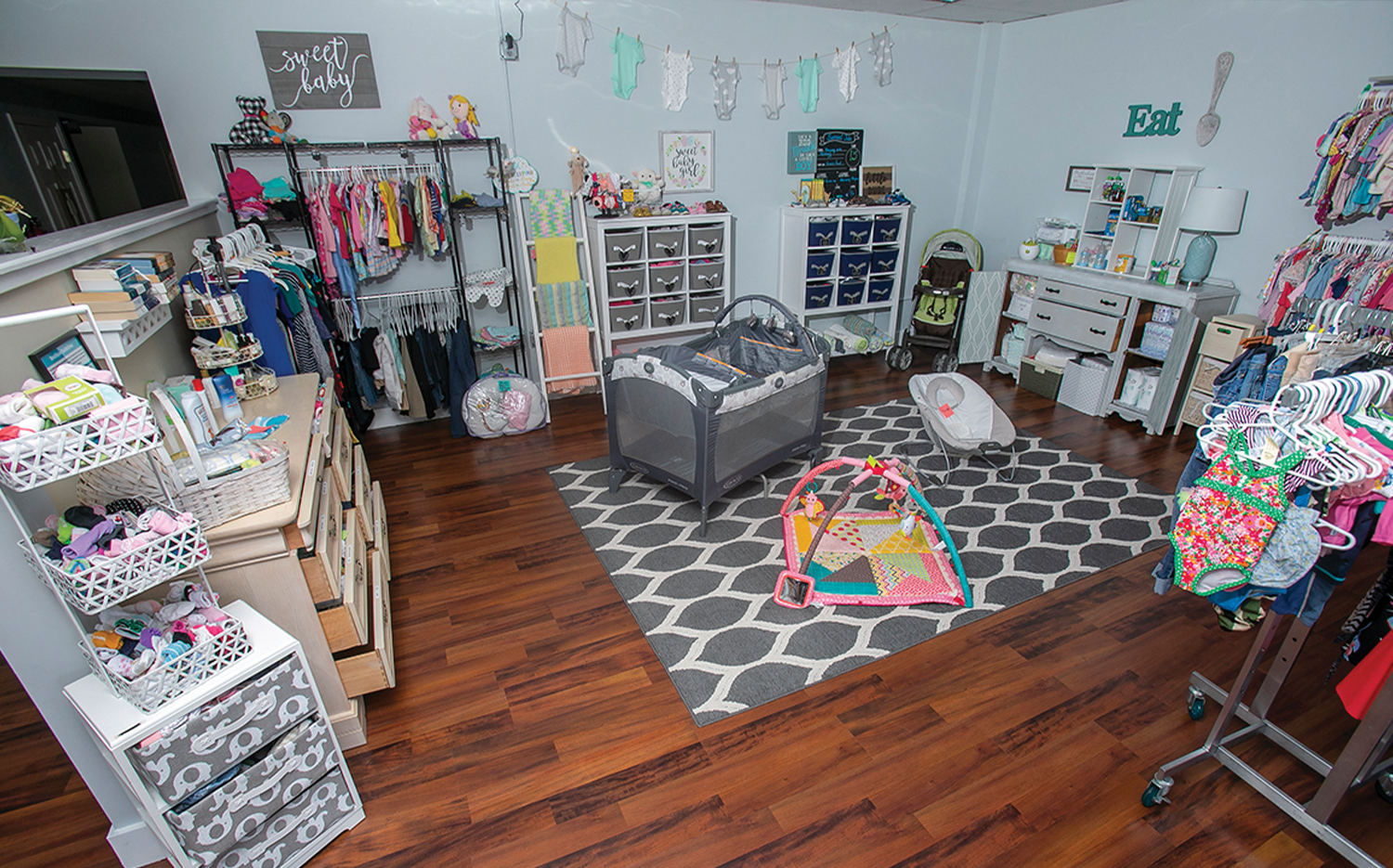 EXECUTIVE DIRECTOR LYNDON AZCUNA says a woman’s decision to abort her child depends in large part on the father. Azcuna radiates enthusiasm. His crisp blue gingham shirt tucked precisely into dark jeans matches his passion for organizational structure and a well-built program. He used to be a community developer with Outreach Community Center in Carol Stream, Ill., a suburb of Chicago. He is passionate about strengthening the family, the fundamental building block of any community.

Last fall, LifePlan started a ministry for men. When a woman comes in with her significant other, staff and volunteers immediately refer the man to this program. A local pastor, Greg Rensberry, heads the men’s ministry. Rensberry recruits and trains volunteer men from local churches who are committed to their families and want to help new fathers walk through the different stages of parenting. Men can watch the parenting courses and sign up for coaching.

They see a mix of husbands and boyfriends. Some clients are struggling to understand their role as a father. Others are battling addiction or are afraid and just need an older man to talk with. The coaches try to connect the clients with a local church. “That’s why there can even be an ongoing relationship. Hopefully, even years down the road,” said Rensberry.

In March the group had 81 visits and 30 distinct clients. LifePlan sees about 1,000 visitors a year and about 60-80 distinct clients. That is a challenge: getting the women, and especially the men, involved for the long haul so that they have more opportunities to hear the gospel. “Men’s ministry is very difficult in our context,” said Azcuna. Most men see the center as something for women. And when they do come, the men don’t open up as easily. 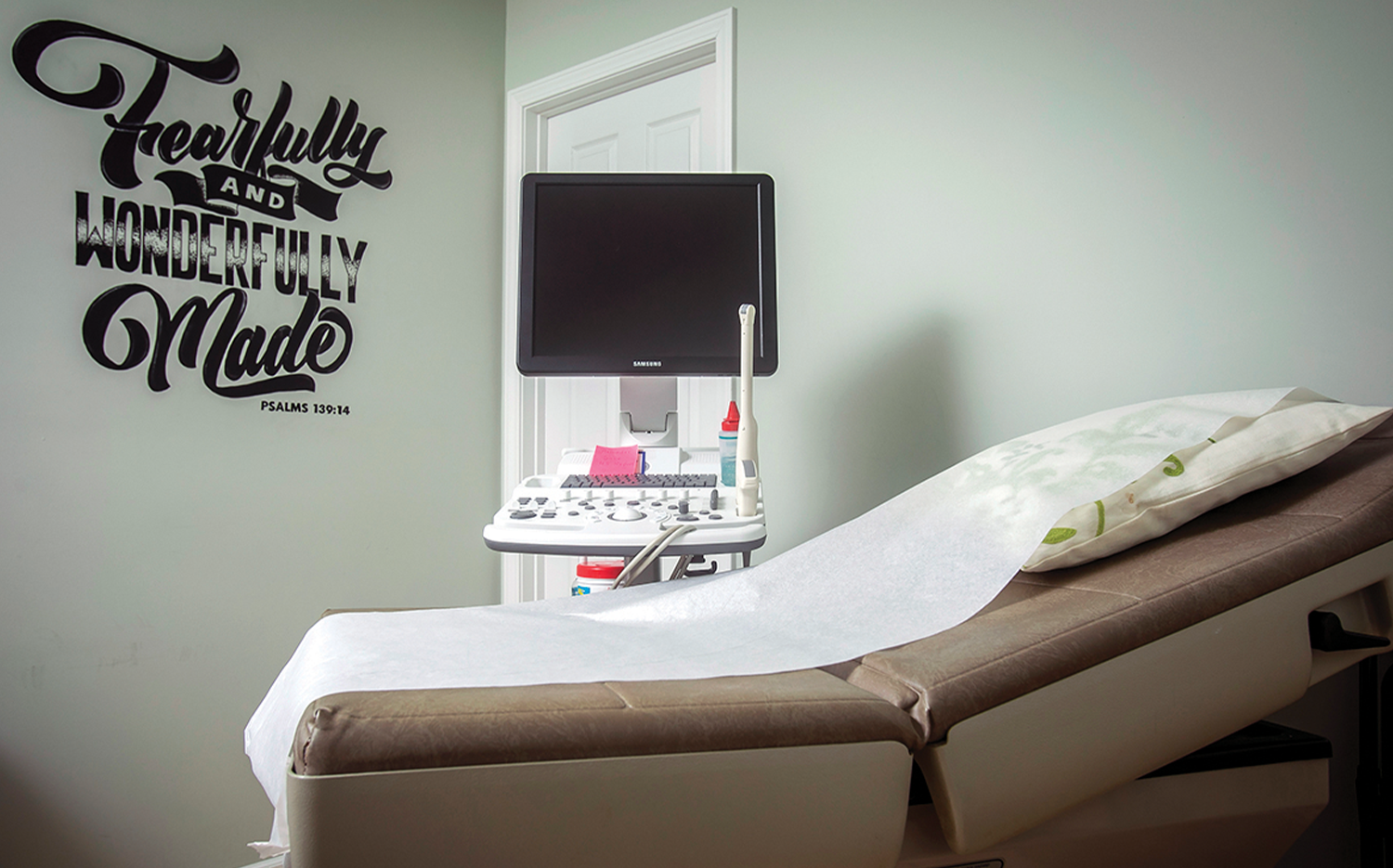 Clients who miss an appointment two to three times have to restart the program. About 25 percent of people who come in complete the Life Matters program. When a woman completes a parenting or life skills class she can choose eight clothing items and earn 10 boutique bucks—equivalent to a package of diapers. Some choose to save up for something bigger like a crib.

If a man also attends, the rewards double. Jenny Sergio, 57, volunteers once a week as a consultant at LifePlan. Sergio has seen clients virtually from other countries. One man in India heard about LifePlan through recovering from a pornography addiction. He and his wife Zoom-call Sergio. She has had a couple of men come with their girlfriends. “It’s more than just the baby,” she said.

The very last verse in the Old Testament says that Elijah would come to turn the hearts of fathers to their children. That’s why the men’s ministry is impor­tant, said Katrina Patrice, 60, the operations director at a new LifePlan center in Benton Harbor, Mich. If men don’t see the value of their children, they won’t see the value of their girlfriends and wives taking care of their children. When WORLD visited the organization, no male clients had shown up that day. Usually they have about three on the books, but even those don’t always show up.

Effective outreach is another challenge. Last year, the FDA approved the abortion pill for online distribution. “Now the abortion provider is the mom herself. … That changes a lot of things,” said Azcuna. Fewer women feel a need to visit the center. “We need to be going out there.” LifePlan is working to expand its prevention efforts through Facebook and Instagram. 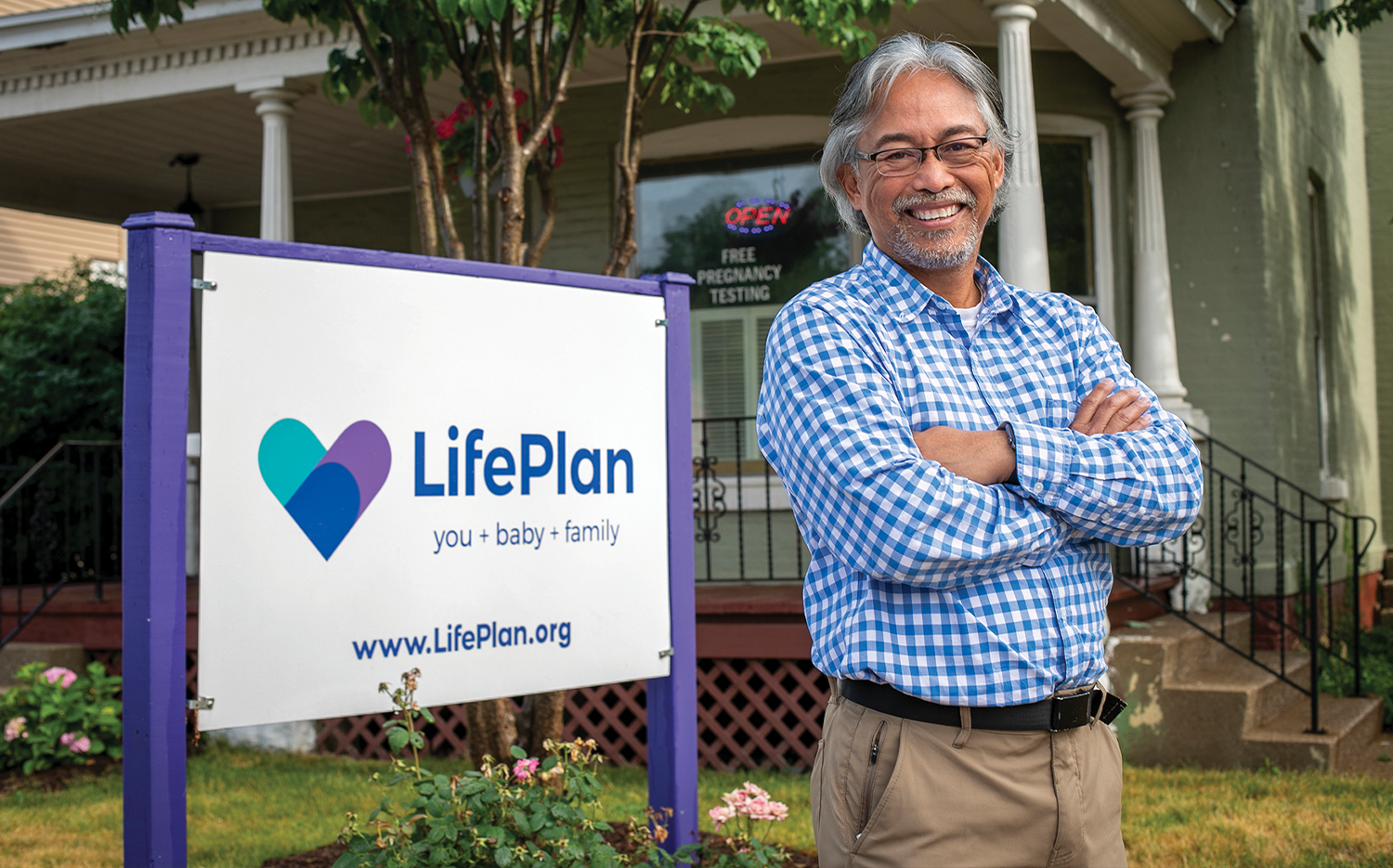 LIFEPLAN ESTABLISHED the center in Benton Harbor in 2019 and hopes to establish one in South Bend later this year. Clients are ushered into a clean and bright space in the lower level of an office building. The center boasts another spotless boutique with a garland of white, gray, and turquoise onesies held by clothespins hanging above the shelves. A black-and-white rug decorates the wooden floor. In the ultrasound room a placard that says “It is well with my soul” in flowing cursive surrounded by a white wreath hangs above the examining table.

Consultants usually see lower-income women, with about 80 percent of their clients qualifying for government assistance. But LifePlan doesn’t have any income requirements because strengthening the family is about more than services. “A lot of people hear ‘crisis pregnancy center’ and think that’s for those 15-year-old girls in the poor neighborhoods. And really it’s for anyone,” said Patrice.

Back at the Niles center, Brittain wondered how she had ever considered abortion when Mark was born on March 1, 2020. “He was so perfect, and he had all this dark hair,” she said, smiling.

She married Mark’s dad in November 2020. They live a few blocks away from LifePlan in Niles. Mark is now a spunky 2-year-old in a yellow jacket who has trouble sitting still. He turned the lights on and off as Brittain talked, only pausing his activity to watch the rain fall out the upper-floor window. Brittain still comes to LifePlan every two weeks and meets with Stark. Mark calls her Mimi.

—Read about WORLD’s other 2022 Hope Awards winners in this issue.

WORLD has updated this story to correct the LifePlan executive director’s salary.