A woman holds her younger child while standing in a burned-out area in the recently attacked village of Aldeia da Paz (near Macomia), Mozambique. Marco Longari/AFP/Getty Images

Early in May, a senior pastor ended a harrowing seven-day journey with his wife and four children at the doors of Iris Global Ministries in Pemba, the capital of Mozambique’s northernmost Cabo Delgado province.

The pastor, whom WORLD is not identifying for security reasons, had served with an Iris church in the provincial district of Macomia, some 117 miles from Pemba, since 2009. As insurgent attacks worsened in the region, the pastor said he and his family could neither go to their farm nor sleep in their homes out of fear.

They decided to leave, walking for four days and resting in surrounding bushes. They ate snails to survive. The family arrived in the city of Monetpuez, where they hitchhiked a ride for another three days before arriving in Pemba, with only a supermarket bag of their belongings. “They had basically been cornered into surviving,” said Marina Mariane Vilela, a missionary with the U.S.-based ministry.

The family is among an increasing number of people fleeing into Pemba and other provinces as Islamist attacks worsen across northern Cabo Delgado. The attacks have killed more than 1,000 people and displaced 211,000 others. Little is known about the leadership of the local group—called Ahlu Sunnah Wa-Jama (ASWJ)—that claims responsibility for most of the attacks. Yet ASWJ’s brazen choice of targets and its international affiliations have left the government scrambling for a solution to the brewing humanitarian crisis and regional security threat.

Security groups have traced ASWJ’s beginning as an Islamic religious sect opposing what it considered moderate Islamic practices in the region. (Ahlu Sunnah Wa-Jama means “followers of the prophetic tradition.”) The terror group began low-level acts of defacing local mosques and confronting imams before retreating into the bushes of the Quirimbas National Park to build its radical forces in 2015, explained Paolo Israel, a professor and senior researcher on northern Mozambique at South Africa’s University of the Western Cape.

The insurgents resurfaced on Oct. 5, 2017, with an attack at Mocímboa da Praia. Some 30 armed insurgents stormed into the port city, where they killed 17 people, attacked three police stations, and seized weapons. Security officials regained control later in the day. 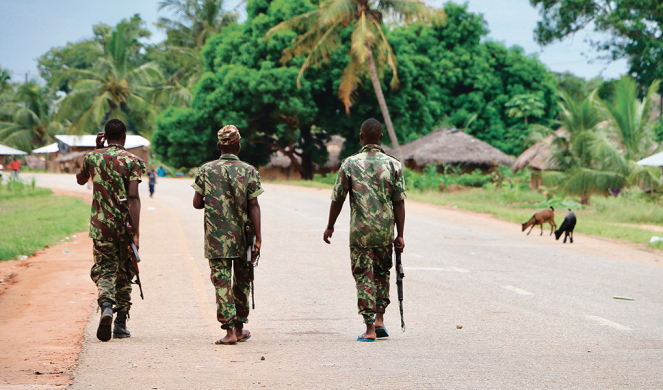 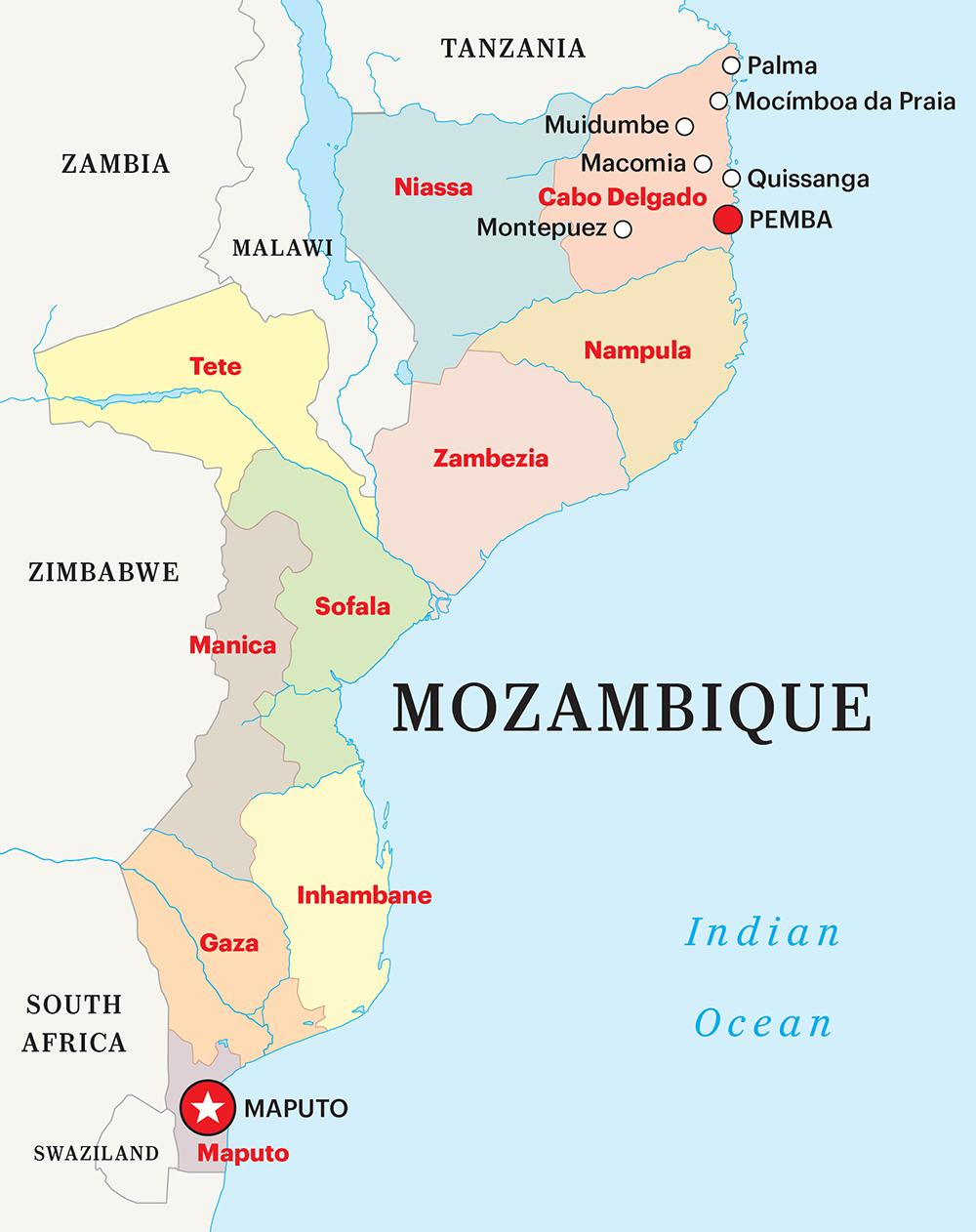 Word of the attack and the ensuing panic spread quickly around the province. The same day, Vilela’s team was traveling by boat across narrow channels and low-lying mangroves on an aid mission to the village of Jimpia. They found the villagers at the seashore, their homes empty.

“They stayed up all night watching,” Vilela said.

In June of that year, ISCAP for the first time recognized ASWJ, reporting “the soldiers of the Caliphate were able to repel an attack by the Crusader Mozambican army” in Mocímboa.

Israel said the group is still quiet on its leadership and how deep its involvement with the Islamic State runs. Locals call the terrorists “al-Shabaab,” although the group has no known affiliation to the Somali-based terror group with the same name. But some of the insurgents received combat training with the Allied Democratic Forces, an Islamist rebel group active in DRC and Uganda, Israel added.

ASWJ has increasingly become more brazen in choosing targets, and its mission has become clearer. The group carried out more than 100 attacks between January and April, according to the Armed Conflict Location and Event Data Project (ACLED).

On March 23, the terrorists tried for a second time to seize control of Mocímboa. They set up barricades on major roads in the town and erected their black-and-white flag over the police headquarters. They captured five army and police barracks before responding forces regained control one day later.

The group launched a similar attack days later on the district capital of Quissanga, where militants seized a police station and set up flags before security forces pushed them out. At least six security officials died in the unrest. During the raid, the insurgents released a video, where they called for the implementation of Shariah law and rejected “the wealth of this world.”

ASWJ has declared elements of the state as its main target, but civilians are also casualties in the violence.

In April, the group killed 52 people in the village of Xitaxi in Muidumbe district after none of the young men there agreed to join the group’s ranks. Pemba-based Catholic Bishop Luiz Fernando Lisboa told Aid to the Church in Need that the insurgents destroyed at least five local chapels and some mosques.

In May, Mozambique’s ministries of Defense and Interior confirmed a string of attacks across seven districts, where insurgents kidnapped at least 14 people and destroyed a new hospital and several telecommunication and electricity centers.

The insurgents occupied Macomia from May 28-30, when they killed at least 19 people and released inmates from a prison before withdrawing. On June 5, Médecins Sans Frontiéres (Doctors Without Borders) withdrew from Macomia due to the attacks. The group pulled out of Mocímboa da Praia in March.

CABO DELGADO, the northernmost region bordering Tanzania, is one of Mozambique’s poorest provinces despite its political and economic significance. The nation’s 10-year struggle for independence that ended in 1974 began in the province’s Muidumbe district. Mozambican President Filipe Nyusi comes from the province, and it is a stronghold for his ruling Frelimo party. 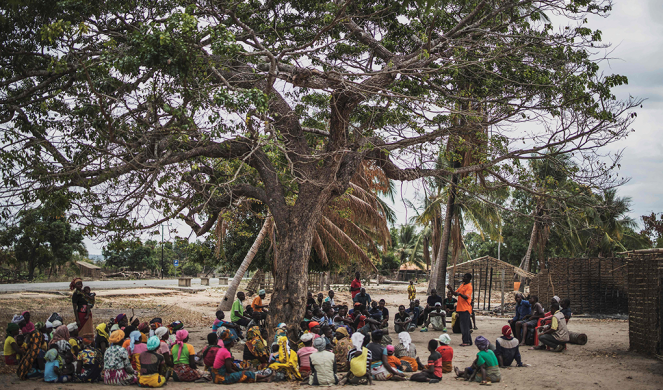 Residents of Aldeia da Paz (near Macomia) gather for a meeting after terrorists attacked their village and burned homes. Marco Longari/AFP via Getty Images

The city of Montepuez is also home to one of the world’s biggest known ruby deposits.

In 2010, the U.S. Anadarko Petroleum Corp. discovered significant gas reserves in the Rovuma Basin that forms the border between Mozambique and Tanzania. The country’s Afungi Peninsula in Palma district is now a hub for several energy companies, including Total and Exxon Mobil. Alex Vines, head of the Africa Program at U.K.-based Chatham House, said the gas reserves will likely make the province “much more important for the GDP of Mozambique.”

Yet the natural wealth contrasts with the region’s large-scale poverty. That contrast has allowed the ASWJ to build on what Vines called a “hearts and minds campaign,” where it poses as the remedy to the locals’ grievances of poverty and government discrimination.

During the brief capture of Mocímboa, ASWJ distributed food and money to the people. In a video that emerged afterward, one militant speaking in the local Kimwani language criticized the government’s individualistic and corrupt nature, and reiterated its plan to set up Shariah law: “Look in the prisons, the poor people wail; have you ever seen a chief arrested?”

The provincial capital of Pemba now resembles a war zone. Armed military officials patrol the streets, and the whirring sounds of helicopters fill the airspace.

Some say the military has lashed out at the wrong targets in response to the insurgency. In 2018, Human Rights Watch documented stories from 12 witnesses and victims of abuse who said military officials arbitrarily detained, tortured, and executed dozens of people they suspected of involvement with the terrorist group.

One year later, the advocacy group documented several cases where military officials unlawfully detained local and international reporters for as long as 13 days and seized their memory cards.

On April 28, Mozambique’s Interior Ministry reported security forces killed at least 129 insurgents that month across the province. About two weeks later, officials reported the death of another 50 insurgents. 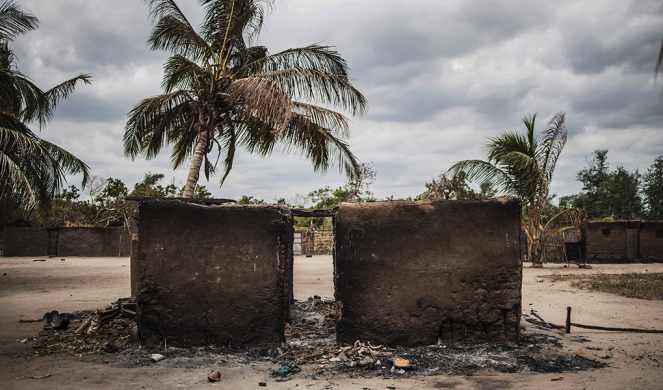 Vines acknowledged the heavy-handed military response succeeded in pushing back the insurgency in some locations but argued it will likely not be sufficient. He calls for development in the poorer provinces, in addition to improved intelligence and security.

In the meantime, Pemba has continued to feel the humanitarian impact of the worsening conflict. At the beach in nearby Paquitequete, boats of fleeing residents continue to dock at what now serves as a makeshift harbor. Many arrivals set up camp along the beach’s sandy shore, transforming it into an informal refugee settlement.

“We have people coming to us day and night saying they’re from the north and they’re hungry,” Vilela said.

Nonprofits working in the province confirmed people are hosting fleeing families and friends in their homes, some with as many as 20 people.

Vilela said the new system in Pemba now requires arriving refugees to present themselves to the local chiefs and add their names to a list to coordinate the aid process.

Iris Global is one of several groups assisting the population amid the coronavirus pandemic that further complicates intervention. The mission has set up hand-washing stations, educated people on sanitation measures, and also invited local security officials to coordinate crowds during aid distributions.

The insurgents speak the local Kimwani and Swahili languages, building fear even in Pemba that the terrorists are in their midst.

Vilela said the community long implemented a system where they report any sightings of a stranger to the local chiefs, who verify the stranger’s identity.

One missionary told me his team has shut down operations in nine of the province’s 16 districts, where villagers have either abandoned their communities or the insurgents have blocked access. His team is working on a contingency relocation plan in case the unrest extends into Pemba.

Vilela echoed similar concerns, saying her team is mindful of the possibility of an evacuation in the future. The attacks and growing security presence have already limited their physical reach.

For now, they continue to assist people seeking refuge and document the stories of survival. (The pastor’s family who arrived with only a supermarket bag of belongings now lives in a home built by Iris Global in Pemba.)

“It’s been suffering with and for the people,” she said. “I’m strengthened by their strength.”

Editor’s Note: WORLD has updated this story to correct the year Mozambique’s struggle for independence ended: 1974.