A protester holds a sign with an image of George Floyd during a peaceful demonstration outside police headquarters in Los Angeles. Mario Tama/Getty Images

“All right we are two nations,” John Dos Passos concluded in his 1936 novel about wealth and poverty, The Big Money. Events during the two weeks concluding on June 8 showed that’s true about the disunited states today, although the divide at street level is not so much rich vs. poor but protected-from-consequences vs. exposed, and tired-of-harassment vs. tired-of-chastisement.

Let’s unpack this. Derek Chauvin, the Minneapolis police officer now charged with murder, should never have had the opportunity on May 25 to kill George Floyd by pressing his knee on Floyd’s neck minute after minute, even when Floyd repeatedly said, “I can’t breathe,” even when Floyd went silent. Chauvin’s record included 17 prior complaints, including pulling a woman out of her car after she went 10 mph over the speed limit—but it’s hard to fire a police officer, given union rules.

On June 1 Minneapolis police union President Bob Kroll had the gall to send out a letter complaining that Chauvin and the three other officers at the killing of Floyd “were terminated without due process.” Chauvin was among those protected from the consequences of his actions—until he went too far while the whole world was watching. Compare his situation with that of George Floyd, who was exposed: Once his high school and community college basketball career ended, he bounced from unskilled job to job, most recently losing his position in a restaurant that closed because of COVID-19.

In that way our pandemic and our racial pandemonium are parallel. The coronavirus has medically hit all kinds of people, but the impact of our national shutdown has not been economically awful for those protected from the consequences by being able to work from home. It’s been horrendous for those who lost their jobs and their small businesses—and the recent riots increased the bleeding.

Another divide is tired-of-harassment vs. tired-of-chastisement. Anyone who’s the parent of African American teens knows they are more likely to be treated with suspicion, when they’re in a store or driving a car, than their white counterparts. In 1955 Rosa Parks took her first step toward becoming “the first lady of civil rights” when she refused to move to the back of a Montgomery, Ala., bus: She later said she was “tired of giving in.” Millions of minority members feel that way. 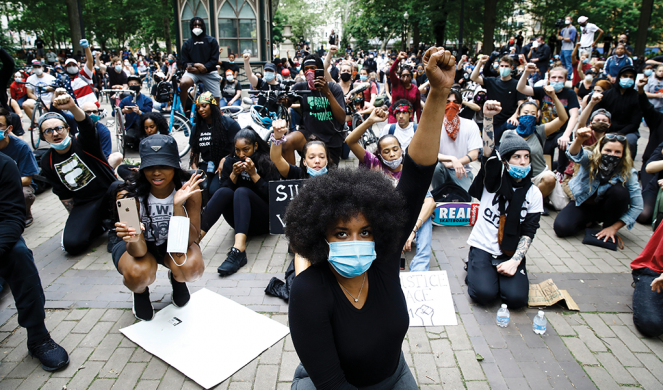 Meanwhile, millions of white folks who don’t live within a few miles of oceans or great lakes are tired of being chastised as dumb “deplorables.” They’re tired of scorn from almost every major media outlet and in almost every grove of academia. They’re appalled at urban scenes that look like outtakes from The Dark Knight (2008) and last year’s alienation movie, Joker.

Peaceful protests honored Floyd. The clustering of demonstrators seemed weird to those told it was dangerous to cluster in churches. Oddly, more than 1,000 public health pros declared in an open letter regarding the protests: “We do not condemn these gatherings as risky for COVID-19 transmission. … We support them as vital to the national public health.” But the real villains were those like CNN’s Chris Cuomo, recovered from his coronavirus bout, who urged on rioters by saying, “Show me where it says that protesters are supposed to be polite and peaceful.”

Cuomo may not have been up on the First Amendment, which protects “the right of the people peaceably to assemble.” Most protesters were peaceful, but from May 30 to June 1, under the cover of darkness and dark thoughts of revenge, rioters in dozens of cities smashed store windows and beat up small-business owners or managers who tried to stop them. When one marauder murdered retired St. Louis police Capt. David Dorn, a handwritten sign next to flowers and a teddy bear read, “Y’all killed a black man because ‘they’ killed a black man???” 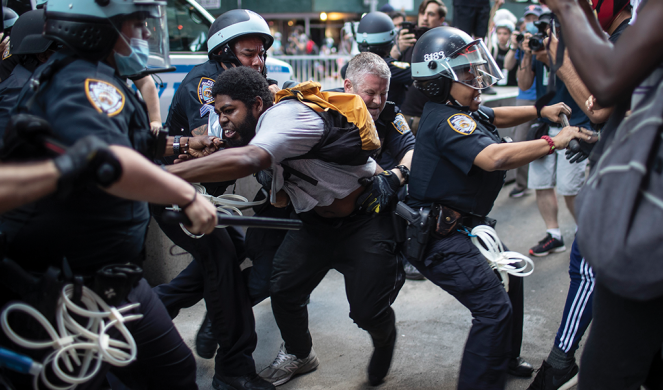 So where do we go from here? Conservatives can get mad by staring at computer screens and watching videos labeled “Man stomped and stoned for trying to defend a bar from being looted … Destroying store and beating unarmed woman and her husband … Restaurant manager beaten and stomped for trying to defend his workplace … Looting in Union Square NYC … St. Louis neighborhood on fire … Pharmacy destroyed/looted in Dallas … Destroying Justice Center Portland.”

I’ve also watched videos primarily passed around by liberals: “Cops push a protester to the ground, his head slams on the concrete … Protester walking home when police tackle and beat him … NYPD tackles a guy and beat him … Protester badly injured as a cop bashes his head in with a shield … Police attack peaceful protesters.”

And don’t forget all-purpose anarchists, who can relish thieves’ taste for brand names: “Ransacking Target … AutoZone on fire … Looting Louis Vuitton store … Destroying Apple Store.” One shot of a looted Nike store shows its famed come-on in big letters along one wall: “Just do it.” Some did. Viewers might even relish some tragic slapstick comedy along the Proverbs 26 line of “Whoever digs a pit will fall into it”: “Rioter sets himself on fire while trying to set a building on fire.” (His companions helped him put out the flames.) 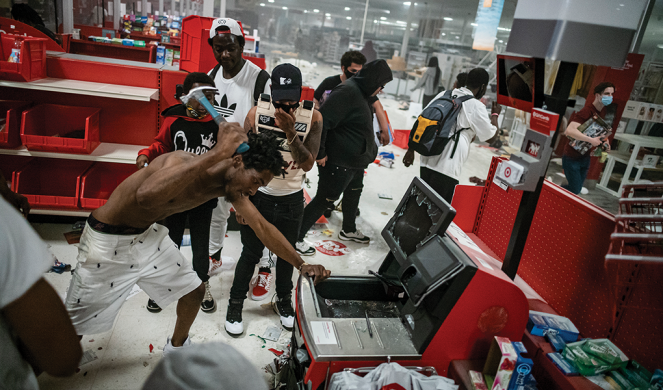 Whatever our perspective, a few of these videos go a long way. After informing ourselves, we can continue to mainline videos and trade horror stories—or we can try to develop a different divide. On one side: the overwhelming majority of Americans, liberal or conservative, who favor peaceful discussions of our differences, and look for opportunities to work side by side to solve problems. On the other side: the relatively few, left or right, with horror in their hearts.

So what’s the big takeaway from peaceful protests and violent destruction in our urban centers, such as the City of Angels? We shouldn’t ignore “Shocking Video: LAPD officers seen striking protesters with batons.” But we should also remember how vandals trashed the Santa Monica Music Center, which Chico and Victor Fernandez started in 1972. For nearly half a century adults and children who could not afford to buy their own musical instruments went there for inexpensive rentals. On May 31 gangs with guns, machetes, and hammers stole instruments and amplifiers, then smashed cash registers and display cases. Both sides are part of the story.

In this issue you can read Sophia Lee’s look at the Los Angeles mosaic of peaceful protests and broken glass. After that comes Emily Belz’s story from Camden, N.J. Two decades ago I visited Camden streets where drug dealers and murderers ruled. Now, though, the police department has reformed, and crime is down.

Updates: WORLD has corrected this story to say Rosa Parks refused to move to the back of a bus in Montgomery, Ala. WORLD deleted “by all accounts Floyd was a gentle giant.” Accounts varied​.