As murderous gangs rule the streets, despair causes many people to head north to the United States

A member of the Barrio 18 gang in San Pedro Sula, Honduras. He said he has been in the gang since he was 10. John Moore/Getty Images

Shortly after Carlos Hernandez joined a Honduran police commission tasked with purging corruption from a notoriously crooked force, he unfolded a note left on the front steps of his home in a high-risk neighborhood in Tegucigalpa, Honduras.

The message was simple: “We found you, we know that you live here, and you’re going to pay.”

Hernandez scrambled to hide the frightening note from his curious teenage son, but his mind was reeling. “The risk was no longer a just possibility,” he later wrote. “It was a reality. They had found me.” Hernandez asked himself: “What am I doing?"

What Hernandez and others on the commission were doing seemed impossible: Cleaning up a national police force known for corruption in its highest ranks.

In 2016, the Honduran president formed the commission after reports implicated two top police officials and two dozen officers in the 2009 assassination of the country’s top drug prosecutor. Other investigations connected high-ranking police officials with the infamous gang MS-13.

The warning note jolted Hernandez, but his family and his co-workers at the Christian group Association for a More Just Society (AJS) convinced him and other colleagues on the commission to persist.

The risk paid off.

Over the next year, the commission removed six out of nine generals and 5,000 out of 13,000 police officers on the force, including hundreds of top cops. A fresh crop of officers is on the streets, with new training designed to combat corruption.

But the reward wasn’t without cost. One of the commission members survived an attempted murder. His bodyguard didn’t. Other members moved to safer homes and switched their children’s schools.

Omar Rivera, another AJS advocate on the commission, said such work is important, despite the danger: “We have always been convinced that to be a brave Christian you have to do more than criticize.”

These days, criticism abounds over violence and poverty in parts of Central America and over what U.S. officials should do in response to a surge in Central American migrants trying to cross the U.S. border—including families with children and thousands of minors who have showed up alone.

As that debate continues, it’s also worth considering how to confront the vexing problems that drive thousands of migrants from Central America to abandon their homes and attempt a harrowing trip north.

What can be done at the source?

Brave Christians are among those answering that question by doing hard work to address some of the root issues that fuel suffering in Central America. Kurt Ver Beek, one of the founders of AJS, says no matter what the United States does with its own immigration policy, “If things remain terrible [in Central America], the people are going to keep coming.” 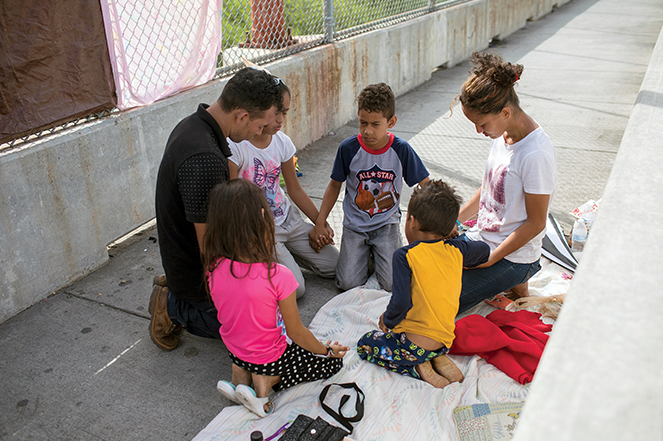 Asylum seekers from Honduras pray while waiting on the Mexican side of the Brownsville & Matamoros International Bridge near Brownsville, Texas. Tamir Kalifa/The New York Times/Redux

FOR MANY CHILDREN on the streets of Tegucigalpa, things do remain terrible.

Michael Miller has lived in the capital city for nearly 20 years, after visiting Honduras for the first time as a Wheaton College student in 1993. In 2000, he founded the Micah Project—a Christian home for boys living on the streets.

Miller describes the dynamic from his office in Tegucigalpa, where he’s just returned from the seventh funeral in three years for boys known by the ministry. (The group’s work includes regular outreach to boys still living on the streets.)

He says many boys run away from their own homes because of domestic or gang-related violence. Like other cities in Honduras, gangs are pervasive in the capital, as members divvy up the city in grids to control drug trade and extortion rings. Signs of a dangerous climate are ubiquitous—down to the armed guards outside the McDonald’s and Wendy’s.

For those living in poorer neighborhoods, the danger is hard to avoid: Gangs often demand an extortion fee known as a “war tax” from Hondurans who own a business, even if it’s a small local market. Failure to pay can invite death. “That’s when you see the bus burned out, and the driver shot,” says Miller. “These are daily stories.”

Boys fleeing violence in their homes or neighborhoods often live in packs of four to twelve in pockets around the city. They beg for money or do small jobs for local vendors, and they often become addicted to yellow shoe glue, sniffing the toxic substance from empty Coke bottles.

Miller says the boys he knows (as young as 11) aren’t usually recruited by gangs, but they still don’t always escape the harassments.

A 2015 study by the United States Agency for International Development (USAID) reported on the two major gangs in Honduras—Barrio 18 and MS-13. The report outlined the highly organized gang structures running drug traffic and extortion rackets and followed operations down to its lowest level: boys between the ages of 6 and 14.

In Barrio 18, the boys—known as banderas—are often forcibly recruited to serve as lookouts or messengers and to carry weapons or pick up extortion payments. Not all banderas are recruited to become gang members, but it’s still a dangerous life for young boys.

Overall, migration from El Salvador, Guatemala, and Honduras to the United States rose by 25 percent from 2007 to 2015, even as the number of Mexican immigrants declined by 6 percent.

Most Central American migrants still cite economic concerns as their primary reason for trying to cross into the United States, but for at least some, economic woes and violence are connected. For example, if a merchant can’t pay a war tax to a gang, he sometimes flees with his family.

Some Hondurans flee to other parts of the country, but they often find gang violence there too. Others apply for asylum when they arrive in the United States, but it’s a long shot: Immigration judges denied nearly 80 percent of the 11,020 asylum requests from Hondurans from 2012 to 2017. Miller says he counsels people not to go to the United States illegally, but he also has compassion for their desperation: “That’s a line most missionaries walk.”

At the Micah House, Christian counselors and staffers try to ease the boys’ sense of desperation and focus on recovery and rebuilding their lives: They help them detox from addictions, and they start a homeschooling process with them.

Some have graduated from college or vocational schools, some have gone into ministry, and some have worked lower-wage jobs. Miller says whatever work they find, the goal is to help the young men find a way to live a stable life in Honduras. It’s one way to keep them home.

Other Hondurans won’t stay, despite the ongoing controversies at the U.S. border. They know about the strife, says Miller: “But I just don’t think it’s a deterrent for many people. They think it’s riskier to stay.” 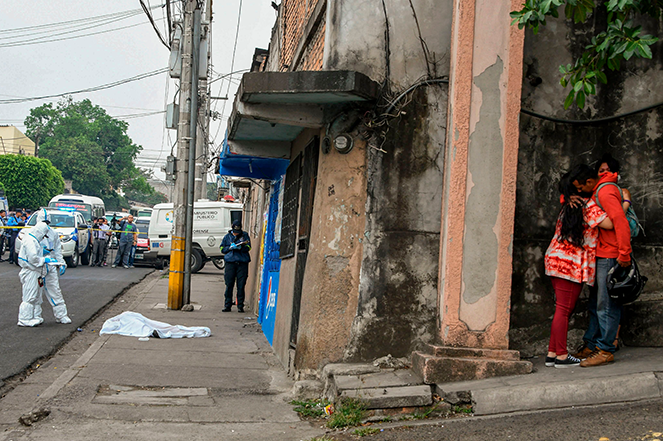 Relatives of a student who was shot dead by alleged gang members when she was heading to class mourn at the crime scene in Tegucigalpa. Orlando Sierra/AFP/Getty Images

IN THE SAME CITY, workers at the Association for a More Just Society (AJS) try to lower the risks.

Ver Beek lives in a poor neighborhood in the capital city and says it’s common to hear neighbors discussing threats from gangs. Every bus and taxi driver in his neighborhood pays a regular fee to gang members. (The USAID report cited a leader of a bus collective in the capital city who said he pays four different gangs. Fees per gang can range from $300 to $700 a week.)

Gangs have often left churches alone, but some congregations have faced trouble. Ver Beek knows a pastor whose congregation built a second floor to host youth meetings and other events. Gang members thought the balcony made a perfect lookout. They climbed up, and eventually took over the second floor to store weapons and drugs.

Many Hondurans are afraid to call the police, fearing gang retaliation or corrupt officers. AJS leaders helped with the commission that overhauled the national police force in 2016, but they’ve also confronted another major problem: An estimated 95 percent of homicides in Honduras go unsolved.

It’s a huge percentage in a country that’s had one of the highest murder rates in the world in recent years. Though the homicide rate dropped 25 percent in 2017, it’s still high, and the unsolved cases create angst among citizens and impunity for criminals.

Staffers at AJS have confronted the problem by creating three-person teams that serve five of the most violent neighborhoods in the city. When a team learns about a murder, a Christian psychologist offers counseling to the family, and a private investigator offers to try to help solve the crime.

The investigator turns any findings over to police officers, who sometimes use the information to help solve the murder. An AJS attorney offers to help the prosecutor with the case and works to convince frightened witnesses to show up in court.

It’s an under-the-radar effort, with the teams meeting family members and witnesses away from the neighborhood or police stations, and though it’s risky, it’s also been fruitful: Ver Beek says the teams have a 40 percent success rate of helping to solve murders.

He’s encouraged by the declining murder rate and the progress on reforming the national police. “There is reason to hope,” he says. “Things are changing—but it doesn’t always feel that way to a family when a gang is trying to recruit their son.”

Still, Ver Beek says continuing to address the problems that cause people to flee home is a critical factor in convincing them to stay in Central America—and in improving the lives of people who are suffering.

A 2014 report from the American Enterprise Institute noted the U.S. government had appropriated more than $800 million toward security efforts within Central America.

Still, the conservative group said focusing on the source remained crucial: “Without a substantial effort on the front lines in Central America, more fencing and border patrol agents will fail to meet the critical objective of securing the U.S. southern border.” 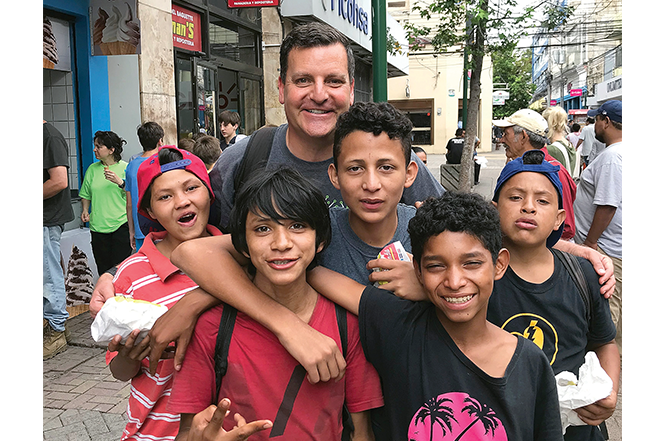 Michael Miller ministers to Honduran children on the streets of Tegucigalpa. Photo courtesy of The Micah Project

Back in Tegucigalpa, Michael Miller of the Micah Project hopes Christians in the United States will remember the value of the longer-term work of spiritual renewal and Christ-centered ministry based in Central America. “I think the American church has an untapped potential to help Hondurans and Central Americans tap into another kind of life,” he says. “It all starts with spiritual life.”

As for his own future, Miller plans to stay. “I love Honduras,” he says. “It’s my home.”