As Minneapolis and other American cities erupted after the death of George Floyd on May 25, a short list may have grown shorter for Democrat Joe Biden: his slate of potential vice presidential candidates.

A few weeks earlier, Sen. Amy Klobuchar, D-Minn., hosted a Zoom fundraiser with Biden and helped raise $1.5 million for his presidential bid. By the end of May, Klobuchar was watching Minneapolis burn and fielding questions about whether she should drop out of contention for Biden’s running mate.

The problem wasn’t Klobuchar’s proximity to the crisis: It was her history as a prosecutor in the county.

For eight years, Klobuchar served as the top prosecutor in Hennepin County, a jurisdiction that includes Minneapolis. Crime rates dropped, but critics point out Klobuchar didn’t bring charges against a slew of police officers facing allegations of excessive force.

One of the names that surfaced just as Klobuchar left for the U.S. Senate: Derek Chauvin, the former Minneapolis police officer now facing murder charges for pinning down George Floyd, as Floyd gasped for breath. Floyd, 46, died shortly after Chauvin knelt on his neck for several minutes.

Klobuchar had already left the prosecutor’s office for her Senate post in 2007 when a grand jury declined to indict Chauvin over the shooting death of a suspect in a separate case. Reports that Klobuchar personally refused to prosecute Chauvin don’t appear accurate, but she still faces questions about how she handled other cases involving officers.

In such cases, prosecutors usually presented evidence to grand juries, and the juries decided whether to issue indictments. But Klobuchar has recently said she should have made more of the decisions about charging officers herself.

It’s difficult to know if the cases would have turned out differently, but the question mark is enough to complicate Biden’s decision-making about a running mate, particularly as the country has faced some of its most widespread urban unrest in decades.

Klobuchar isn’t the only candidate on the vice-presidential list with a background in law or law enforcement, and Biden will have to decide whether such credentials are assets or liabilities before his self-imposed deadline for choosing a running mate by Aug. 1.

The magnitude of the decision intensifies as Biden acknowledges his age: The former vice president will be 78 in November. He told a crowd in January he realizes the person he picks as a running mate should immediately be capable of stepping into the presidency if necessary: “I’m an old guy.”

A few supporters in the crowd chuckled. Biden responded, “No, I’m serious.”

The role has grown in complexity over the years, but even for the most low-key vice president a high responsibility remains: If the president is unable to serve, the second-in-command catapults to the Oval Office.

If that happens, it’s usually by a president’s death, but the 25th Amendment also gives the vice president power to join a majority of Cabinet members (or another body formed by Congress) to declare a president unfit to serve. If a president objects, it would take a two-thirds vote by Congress to approve his removal.

Such circumstances would be extraordinary, but it’s a reminder of the linchpin a vice president could be in such a dramatic moment.

Former Sen. Joe Lieberman, who served as Al Gore’s running mate in 2000, compared the experience of undergoing the vetting process to having an invasive medical procedure without anesthesia.

Biden says he’s healthy, and his campaign has dismissed questions about his mental acuity, but he’s aware his age makes a health crisis a more elevated possibility. (President Donald Trump talks less about his age, but he turns 74 on June 14.)

Biden also hasn’t publicly ruled out the possibility of only serving one term if he’s elected in November. And while vice presidents don’t have a stellar track record of winning the presidency, a one-term Biden would accelerate his vice president’s chance to aim for the top spot.

For Biden, that choice is complicated by a particularly unusual election year.

What will be the most pressing issue in November? Will economic distress be improving or worsening? Will COVID-19 be weakening or surging? Will racial tensions and police relations be on the front burner or back burner?

That last question may be on Biden’s front burner at the moment. After reports resurfaced in late May about Klobuchar’s record as a prosecutor in Minnesota, an analyst for The Cook Political Report declared the senator is “off the list.” Klobuchar defended her tenure as a prosecutor, which included a tough-on-crime approach when Minneapolis was struggling to stem a soaring murder rate in the 1990s. But she didn’t publicly argue for Biden’s selection either way: “It’s his choice.”

Biden already had narrowed down his choice with an early promise: He says he plans to name a woman to the ticket. With heightened racial tensions in the United States, his advisers may urge him to select one of the African American women already on his radar. But some of those choices come with complications too. 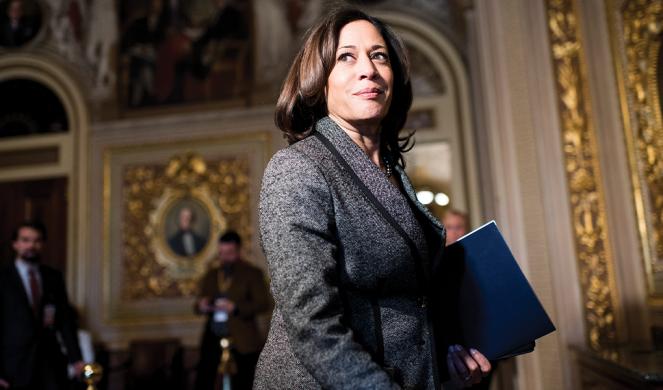 Sen. Kamala Harris, D-Calif., has emerged as a top prospect for the job: She has national name recognition for her grilling of Supreme Court Justice Brett Kavanaugh during his confirmation hearing and for her own run for the Democratic presidential nomination.

Voters might also recognize Harris as the candidate who pounced on Biden during the Democratic primary debates: She attacked Biden’s record on race and busing. Biden seemed stunned.

Harris also has her own record as a prosecutor in California, where she served as San Francisco’s district attorney and then the state’s attorney general. During the Democratic primaries, Harris faced scrutiny over what some called a mixed record.

For example, Harris declined to pursue the death penalty against an assailant who fatally shot a police officer, but she also appealed a separate judge’s ruling that could have worked toward outlawing the death penalty in the state. Early last year, her campaign platform said she would seek a federal moratorium on executions.

Aside from potential inconsistencies, Harris would face a raft of questions about the slew of cases she’s worked over the years—all while debates over racial tensions and criminal justice roil the nation. 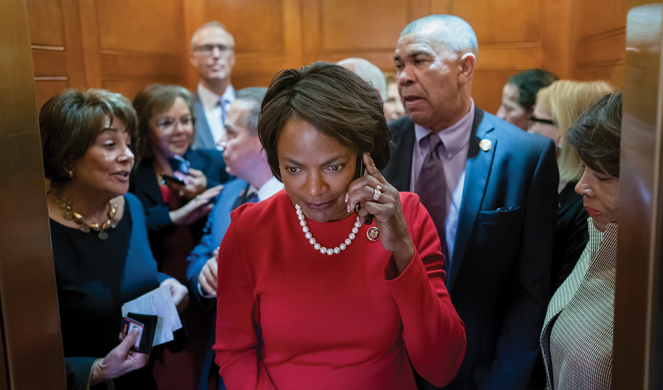 A lesser-known candidate has also drawn attention: Rep. Val Demings, D-Fla. Though Demings doesn’t carry broad name recognition, she does tick boxes that could be appealing to Biden: She’s from a swing state, she served as an impeachment manager during the Trump inquiry, and she once worked as the chief of police for the city of Orlando.

After George Floyd’s death in Minneapolis, Demings penned a blunt column for The Washington Post: “As a former woman in blue, let me begin with my brothers and sisters in blue: What in the hell are you doing?”

Still, Demings likely would face questions about her own department’s history during her tenure as Orlando’s police chief: The Orlando Sentinel reported that Orlando police used force at more than double the rate of similar-sized agencies. The investigation’s span included one of the years Demings served as chief.

In 2010, Demings’ department cleared an officer who broke an 84-year-old man’s neck while subduing him. Officers said Daniel Daley had become belligerent over his car being towed. A federal jury awarded Daley $880,000 in damages.

If Biden’s camp gets skittish over choosing a candidate with a history in law or law enforcement, his choices narrow even more, but a handful of women are still drawing speculation as hopefuls. 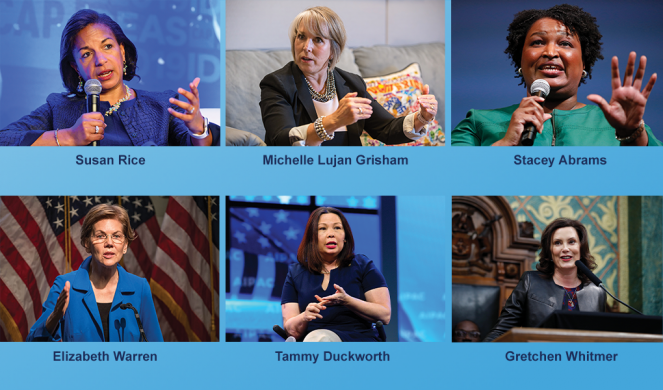 Susan Rice, former national security adviser to President Barack Obama, told PBS she would “certainly say yes” if Biden asked her to be his running mate. Michelle Lujan Grisham, the Latina governor of New Mexico, said the reports that Biden was considering her for the post were “flattering.”

Other names floated: Stacey Abrams, a former representative in the Georgia Legislature and the Democratic nominee for the state’s governor in 2018. (She lost to Republican Brian Kemp, but has declared her ambition to be elected president within the next 20 years.)

Biden said Michigan Gov. Gretchen Whitmer was on his list of potential picks even before she publicly clashed with President Donald Trump during the COVID-19 crisis. He’s also reportedly vetting Sen. Tammy Duckworth, D-Ill. The 52-year-old Asian American is a combat veteran who lost both legs in the Iraq War.

The biggest wild card might be a senator who has expressed enthusiastic interest: Sen. Elizabeth Warren, D-Mass. Warren might appeal to supporters disappointed in her failed bid for the presidential nomination—and perhaps to those still stinging from Sen. Bernie Sanders’ loss to Biden. But a Warren pick could also spook moderate or centrist voters worried the senator would push Biden even further left along the Democratic spectrum.

Another potential downside for a Warren pick: If she won the vice presidency and stepped down from her Senate post, the Republican governor of Massachusetts could appoint a Republican senator to take her place until a special election—and potentially reduce Democratic power in the Senate temporarily.

IF IT SOUNDS LIKE a lot to process, it’s just a glimpse into the massive job for the team vetting candidates for Biden. Former Sen. Joe Lieberman, I-Conn., who served as Democrat Al Gore’s running mate in 2000, compared the experience of undergoing the vetting process to having an invasive medical procedure without anesthesia.

That probe will extend into the candidates’ personal lives and into the many aspects of their legislative records that extend far beyond any histories with criminal law. That means while it might be tempting for Biden to allow the current turmoil to guide his decision for a running mate, it might not be the best long-term strategy.

Mark Caleb Smith, the director of the Center for Political Studies at Cedarville University, says he thinks Biden’s decision-making should lean toward a candidate with federal experience, who could be well equipped to step into the presidency if needed.

Smith says he doesn’t see much evidence that a vice presidential pick could deliver a particular state to Biden (or lose many voters already loyal to him), but he does think the choice could sway independent voters considering a vote for the former vice president. It could also influence those contemplating the possibility that always looms for the second-in-command. John Adams, America’s first vice president, was thinking about that too, as he took on the role: “I am Vice President. In this I am nothing, but I may be everything.”