Biden’s big engines that could

With close margins in Congress, the Biden administration may look to Cabinet heads to drive big changes apart from legislation

Rep. Cedric Richmond, D-La., isn’t the highest ­profile name among ­President-elect Joe Biden’s new hires, but he might have one of the toughest jobs: Reach out to “people who didn’t vote for us.”

That’s a wide spectrum: The people who didn’t vote for Biden include a chunk of Donald Trump supporters who contested the presidential election into late 2020, but it also includes Republican congressmen and senators whom Democrats need in order to pass any major legislation in 2021.

Richmond, who announced he’d resign his congressional seat to direct the White House Office of Public Engagement, mentioned infrastructure as a possible starting point: “The famous words are, there’s no such thing as a Democratic bridge or a Republican bridge.”

Other bridges will be harder to build. With close margins in Congress, Democrats likely won’t be able to pass major legislation like the Equality Act—a proposed law addressing sexual orientation and gender identity that many conservatives view as a threat to religious liberty.

But Biden won’t have to build big bridges to make big changes. Instead, he could look to Cabinet officials across federal departments to change agency rules and regulations in ways that could have sweeping effects on public policy—and on religious groups that serve populations in need. One of the primary engines that could drive such change: Xavier Becerra—Biden’s pick for secretary of Health and Human Services (HHS).

It’s a high-profile position, and Becerra is likely to draw high-level scrutiny in Senate confirmation hearings for a simple reason: His record shows a politician more culture warrior than bridge builder, and it raises significant questions about how he’d drive one of the most powerful agencies in the country. 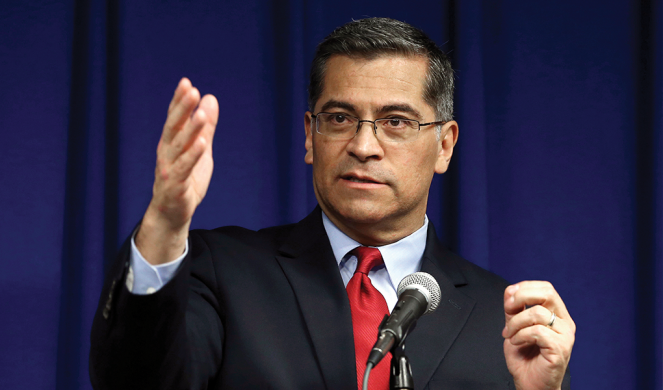 BECERRA’S PICK as the HHS nominee surprised even some of Biden’s advisers.

Officials at medical associations had urged the president-elect to tap a physician for the post, particularly during the COVID-19 pandemic. Becerra isn’t a doctor, and though he’s litigated to defend the Affordable Care Act, he doesn’t have direct experience in healthcare.

He served 12 terms in Congress before taking over as the top justice official in his home state of California when Vice President–elect Kamala Harris left the post to take a Senate seat in 2017.

Daleiden’s case is one example in a litany of pro-abortion battles Becerra has waged as attorney general that offer a glimpse of how he might use an even more powerful federal post at HHS.

In 2018, Becerra defended the California FACT Act, a law requiring pregnancy care centers to post information telling expectant mothers how to obtain abortions. Pro-life advocates said the measure violated their rights to free speech. Becerra argued for a “professional speech” category that the state could regulate.

The Supreme Court ruled against the measure in 2018, with Justice Anthony Kennedy chiding California lawmakers for claiming the requirement was “forward-­thinking.”

Kennedy warned that history shows “how relentless authoritarian regimes are in their attempts to stifle free speech.”

In a protracted legal battle, the nuns had sought a religious exemption from federal requirements to provide contraceptives and abortifacients in healthcare plans for employees. Under the Trump administration, officials at HHS issued a rule granting protection for the Little Sisters and religious nonprofits. Becerra and others sued to strike down the exemption.

Becerra’s record raises significant questions about how he’d drive one of the most powerful agencies in the country.

The U.S. Supreme Court ruled in favor of Little Sisters of the Poor in 2020, but Becerra would have the power to rescind conscience protections at HHS and send the nuns back to court.

Kim Colby of the Christian Legal Society thinks the Little Sisters likely would prevail in future court cases because of protections provided in the Religious Freedom Restoration Act (RFRA). But she says rescinding the conscience rule “just creates more litigation for religious groups trying to do good things.”

Colby noted Biden reportedly had argued during the Obama administration to offer protections for the Catholic group: “The question is … has he abandoned those instincts in order to become president?”

Whether Biden has abandoned his instincts, he’s made clear he’d peel back at least some conscience protections. After the Supreme Court ruled in favor of the Little Sisters last summer, Biden said he was “disappointed” and promised, “If I am elected, I will restore the Obama-Biden policy that existed before the Hobby Lobby ruling: providing an exemption for houses of worship and an accommodation for nonprofit organizations with religious missions.”

The Little Sisters say that won’t work. The “accommodation” means the group may use a third party to facilitate contraceptives and abortifacients for employees, but the nuns say that still violates their religious convictions.

Another rule at HHS on the chopping block: restrictions on Title X funding. The Trump administration decided any group or organization that refers women for abortions is ineligible for Title X family planning funds. Biden called the rule “a direct attack on Planned Parenthood” and promised, “It’s wrong, and as president I will reverse it.”

Becerra’s role at HHS would be key to Biden’s plans and highlights the agency’s sweeping power. HHS oversees issues related to Medicaid, the Food and Drug Administration (FDA), the Office of Refugee Resettlement (ORR), some adoption and foster care agencies, and other areas of governance.

Activist organizations have big ambitions for many of them.

Becerra speaks to reporters outside the U.S. Supreme Court on Nov. 12 following arguments in a case about the Deferred Action for Childhood Arrivals program. Chip Somodevilla/Getty Images

IN DECEMBER, A COALITION of 80 pro-abortion organizations released a “detailed punch list,” outlining what they expect from the Biden administration. (The groups included Planned Parenthood, NARAL Pro-Choice America, and the ACLU.)

The Blueprint for Sexual and Reproductive Health, Rights, and Justice calls for a range of services, including abortion “at no or low cost and without exception for all people, including immigrants, incarcerated individuals, and young people under the age of 18.”

While Biden already has promised to reinstate Title X family planning funds to groups that refer women for abortions, the “blueprint” ups the ante for the HHS program that usually doles out some $280 million a year: The report calls for $954 million instead.

On refugees, the report calls for issuing new guidance to ensure facilities provide refugee minors with “information about and access to” abortion and contraception. The document also calls for repealing conscience protections and getting rid of the HHS Conscience and Religious Freedom Division.

Meanwhile, the Human Rights Campaign produced its own report with action items for each Cabinet department, including a specific recommendation to HHS: “revoke waiver to South Carolina.” That request apparently refers to a waiver HHS granted to allow Miracle Hill, a Christian ministry in South Carolina, to continue using religious criteria in recruiting families to pursue foster care through the state system.

Miracle Hill asks families to affirm a statement of faith as they guide them through the foster care process and provide training and support for foster care families licensed by the state.

The U.S. Supreme Court will rule on a separate case that may settle whether religious foster care groups may obtain exemptions to rules requiring them to place children in same-sex homes or other arrangements contrary to their faith.

Ryan Duerk, president and CEO of Miracle Hill, didn’t speculate on what might happen if HHS revokes his group’s waiver, but he said the organization would “serve and love all people … as long as we can and for as many as we can.”

CHANGING AGENCY RULES usually takes time, so it may take months to see how some overhauls will unfold.

For now, Becerra and other Cabinet nominees still face a Senate confirmation process.

Some conservatives called for Republicans to vote no on Becerra, though formally rejecting a president’s Cabinet nomination is rare: The Heritage Foundation reports it’s happened three times in the past 100 years. Nominees have had their names withdrawn 13 times.

A year ago, Newsom joined Becerra in blasting the Office for Civil Rights in the Trump administration. The office had issued a violation to the state of California for requiring some religious groups to provide abortion in their healthcare coverage. The pair released a statement saying they hadn’t violated the law and declared the state has “a sovereign right to protect women’s reproductive rights”

After Biden announced Becerra’s nomination to HHS in December, Newsom called the pick “a game changer.” “We’ve had our eye on some big reforms,” he told The New York Times. “We’ve been looking for a great partner. And we’ve found one.”

A Cabinet of firsts

When President-elect Joe Biden described a slate of his Cabinet nominees at a Dec. 16 press conference, the word first played a prominent role: “The first ever black secretary of defense”—Lloyd Austin. “The first ever Latino” head of the Department of Homeland Security—Alejandro Mayorkas. “The first woman and South Asian American” to lead the Office of Management and Budget—Neera Tanden.

On this day, Biden announced his ninth Cabinet pick: “The first ever openly gay nominee to lead a Cabinet department.” That’s former South Bend mayor and presidential candidate Pete Buttigieg—tapped to lead the Department of Transportation (though Richard Grenell, who is also openly gay, served as President Donald Trump’s acting director of national security in 2020, also a Cabinet-level position).

Some of Biden’s choices for top spots were familiar names from the Obama administration who drew little public protest from Republican politicians tasked with nomination hearings.

But another feature was notable in some cases: It would be the first time the nominee worked in the specific area assigned by Biden. His choice for secretary of veterans affairs, Denis McDonough, served as President Barack Obama’s chief of staff but never in the armed services. Buttigieg, who is a veteran, hasn’t worked directly in transportation, apart from his experience as mayor.

Confirmation hearings can shed light on their qualifications, and other presidents have picked nominees who weren’t direct experts in their respective departments.

But it appears Biden’s determination to build the most diverse Cabinet ever trickled down to political appointments too. An online job application at Biden’s transition website included questions about gender identity.

“What is your gender?” There were five choices: “Male, Female, Non-binary/third ­gender, Another gender, Prefer not to say.”

“What is your sexual orientation?” Another five choices: “Straight/heterosexual, Gay or ­lesbian, Bisexual, Another orientation, Prefer not to say.”

“Do you identify as transgender?” Only three choices: “Yes, No, Prefer not to say.”

For political appointments in a presidential administration, at least some of those questions are likely a first. —J.D.