Church bells rang out in Washington, D.C., on Saturday after most major news outlets projected Democrat Joe Biden will be the 46th president of the United States. CNN, ABC, NBC, the Associated Press, and Fox News called the race for Biden just before noon.

The outlets said a projected win in Pennsylvania would propel Biden past the 270 electoral votes needed to secure the presidency.

But President Donald Trump said the race isn’t over. The proverbial bells will ring again on Monday, signaling another round of legal sparring in the razor-close presidential contest. A half-hour before media outlets declared Biden the winner, Trump tweeted: “I won this election, by a lot!”

It could lead to a punch-drunk moment for America: Whom did voters choose?

It’s likely the courts will officially settle it. The Trump campaign has legal challenges pending in Pennsylvania, Georgia, Nevada, and Wisconsin. (North Carolina hasn’t been called, but Trump led the Tar Heel State by about 1.5 percentage points Saturday.)

Pennsylvania may be the most consequential contest: If Biden’s lead in the other swing states stands, a victory in Pennsylvania would deliver a knockout blow to Trump’s campaign.

But the contest is razor-thin: As of midday Saturday, Biden held a 0.51 percent lead in Pennsylvania. The state’s law requires an automatic recount if the margin is 0.5 percent or less.

A candidate isn’t allowed directly to request a recount, but he can appeal the orders or decisions of boards of elections in individual counties. Courts would determine if those appeals merited a recount.

According to a report by the group FairVote, over the last 20 years, 31 out of 5,778 statewide elections went to recounts. Three of those recounts reversed election outcomes: The governor’s race in Washington state in 2004, the state auditor’s race in Vermont in 2006, and the 2008 Senate race in Minnesota. In all three cases, recounts handed the election to the Democratic candidate.

While the possibility of a reversal may seem slim, the Trump campaign may see the ultra-slim margins as a reason to pursue the process. The bigger legal hill to climb: proving claims of electoral fraud.

In a handful of states, the Trump campaign or state Republican parties are filing court claims of irregularities, and those hearings will continue next week. Some could end up in the U.S. Supreme Court. 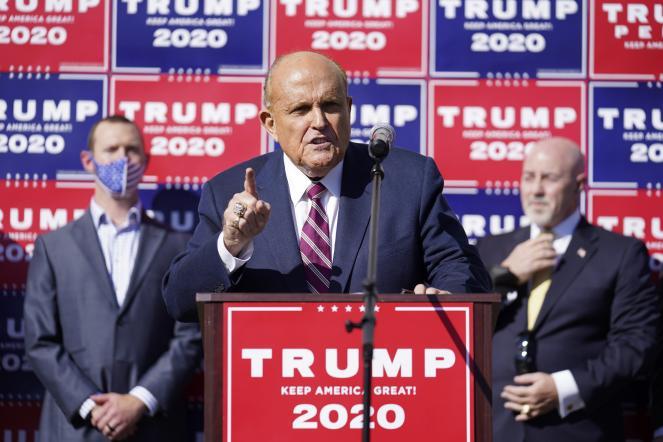 At a press conference in Philadelphia on Saturday, Trump legal adviser Rudy Giuliani said Republicans would file a lawsuit challenging thousands of ballots in Philadelphia and Pittsburgh, where some 50 Republican poll watchers say they weren’t allowed to inspect mail-in ballots in those cities. Giuliani told reporters: “Networks don’t get to call elections, courts do.”

The burden of proof will remain on the Trump campaign and Republicans to provide specific, credible evidence of fraud. The process will require patience, even for those who see the outcome as inevitable.

For now, Biden’s position is clear: He changed his Twitter bio to “president-elect,” and he issued a statement saying: “The work ahead of us will be hard, but I promise you this: I will be a president for all Americans—whether you voted for me or not.”