Patrick McDonald helps a customer at one of His Way’s four thrift stores. Larry McCormack/Genesis

As a teenager, Patrick McDonald tried a beer and hated it. Marijuana was disgusting. But one day, when he was 18 years old, his friends told him to “cook” cocaine by adding the white powder to boiling water with baking soda. The result was a solid substance that could be smoked. From that day he was hooked.

“My body said this is what you’ve been looking for. My brain said you’re finally happy, you’ve arrived. And that led to the next 30 years of hell.”

McDonald, 51, became what he calls a “part-time crackhead.” One week he’d be sober. The next, he’d become dependent again. He would put his finances in order and rebuild relationships only to have it all come crashing down. His longest stretch of sobriety was 18 months. Addiction led to divorce.

After he began selling drugs to support his addiction, he was arrested and went to prison for about 5½ years. When he got out, he did well for a while, fell in love, and remarried. Then, another relapse, another stint in jail, another divorce.

With past rehab attempts sobering him up only temporarily, McDonald initially didn’t want to go to His Way, a Christian recovery center in Huntsville, Ala., and slog through another program for a half year or more. He wanted to be healed in 28 days. But he knew something had to change. Other Alcoholics Anonymous (AA) meetings emphasized spirituality and the importance of finding a “higher power”—a God of your own understanding. “At His Way, the Christ-centered approach was different,” he said.

At His Way’s recovery program, men battling addiction are held accountable in a structured environment where they are confronted by a loving community and, most importantly, the gospel of Jesus Christ. But many men find that change isn’t easy, and some go through the program multiple times. 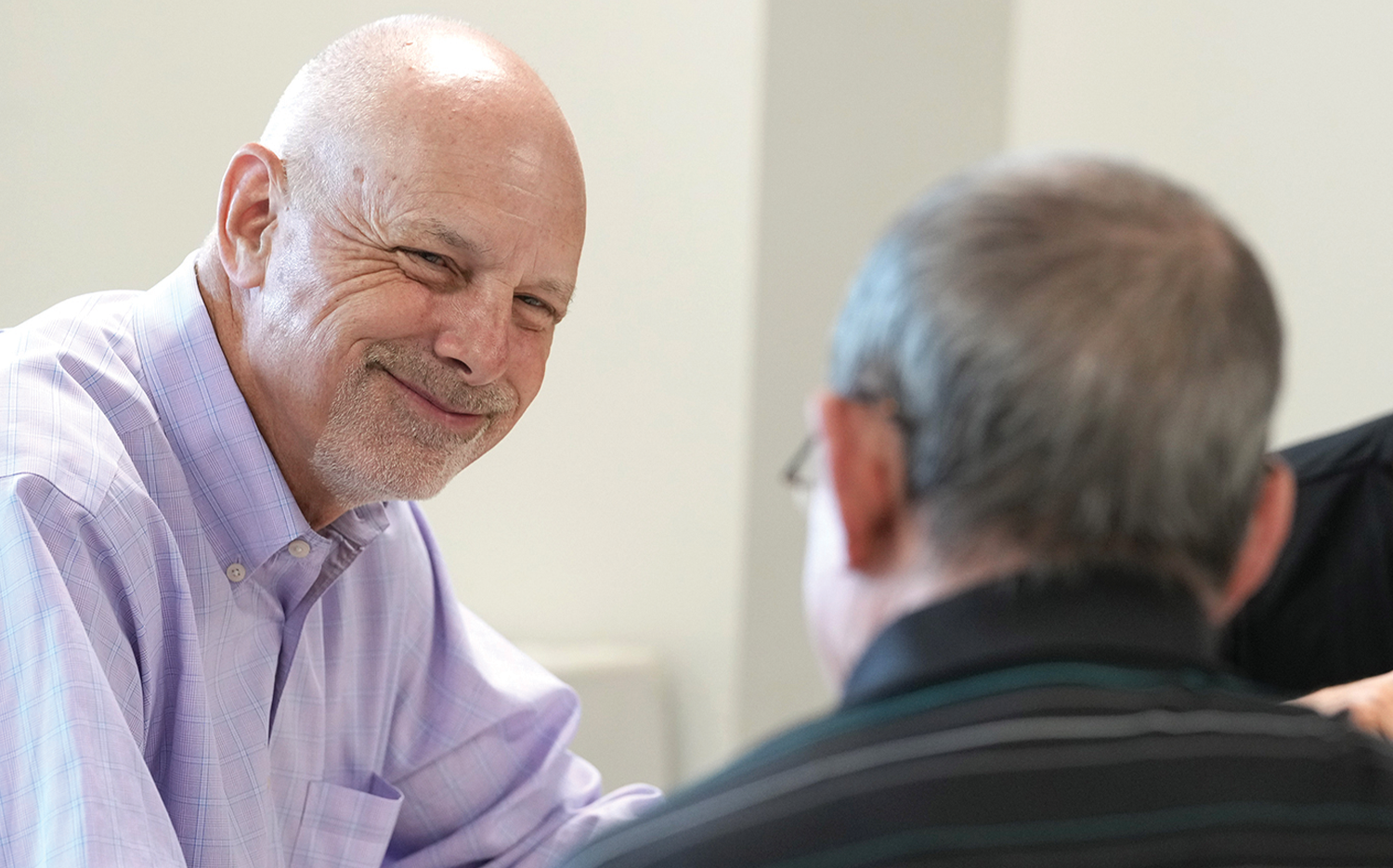 HIS WAY BEGAN WITH a Bible study. The organization’s current director of ministry, Tom Reynolds, helped start an AA-style Bible study called the Bridge Group that met at the Central Church of Christ in Huntsville, where he was a pastor. The leaders felt that AA had moved away from its Christian roots and wanted to share the gospel with men in recovery.

Reynolds told the men that in AA you introduce yourself as “‘I’m Tom, and I’m an alcoholic.’ Your identity is rooted in the problem.” At the Bridge Group, they began by introducing themselves as children of God. That was a crucial distinction, but the leaders soon realized the men faced challenges a twice-a-week meeting was ill-equipped to handle: Some didn’t have jobs or transportation.

Doug Stogner, who became interested in the Bridge Group’s Bible-based mission, had an idea for a solution. He had previously gone through a Christ-centered residential recovery program and came back to Huntsville passionate about starting something similar. He teamed up with the owner of a former nursing home, and they converted the building into a residential center for former addicts. They recruited Reynolds to oversee the program. (As director and board chairman, Reynolds is a nonemployee but is paid as a consultant.)

Reynolds had no idea how a residential program should work, much less a Christ-centered one. He sat down with the residents, about 12 at the time, and asked, “How would you design a program that would be helpful to you in your recovery?” Many of them had been in recovery programs before, and Reynolds used their responses as he formulated a structure. They drafted rules and expectations. Every rule in the handbook was backed by a Bible verse. The fundamental rule: clean drug and alcohol tests. Others involved bed and wake times, chores, and honesty.

Shortly after, Reynolds dismissed most of the men because they violated the same rules they said would be impor­tant to their recovery. But more men trickled in. Some were homeless or former inmates, and some still lived with their mom and dad. Some were former military officers or business owners. Others never had career ambitions beyond drug dealing. Most had been in trouble with the law.

His Way’s residential program, with space for about 43 residents, has now been running for 15 years. Men stay for nine months. An $800 initial fee is often covered by a relative or church group, and after the first 60 days, residents are required to start working and expected to contribute $250 a week from their earnings. His Way partners with companies in the community to find the men jobs. Others work at the organization’s four thrift stores that provide about 40 percent of the ministry’s funding.

When they first arrive, men aren’t allowed contact with anyone in the outside world for 60 days. For the first 30 days they don’t have access to cell phones. After that, only flip phones are allowed.

There is little else to distract them in the facility’s serene environment. The campus sits on a spacious lawn on a quiet street. Birds call to one another from tall pines. Three Labrador retrievers—Sam, Bella, and Buddy—are always ready to play.

A typical weekday schedule for new recruits: breakfast between 5:00 and 6:30 a.m., a 20-minute devotional, coffee break, and three classes teaching either theological topics or life skills lessons regarding financial peace, family relationships, and professional development. In the afternoon: work in the kitchen, sorting at the organization’s thrift stores, or lawn maintenance. After dinner between 4:30 and 6:30 p.m., another devotional and class.

On a recent day in a simple classroom with tables arranged in a U shape, Stuart Whiting, wearing jeans and cowboy boots, taught several residents about the Christian view of identity.

On Saturdays and Wednesdays, outside church members, mentors, and supporters arrive to encourage the men and lead devotions. Alumni are encouraged to return for Bible studies and to grab a meal anytime.

His Way doesn’t require residents to be Christians, but staffers tell them to expect a Christ-centered program. The men must attend church each Sunday.

The teaching, discipleship, and worship have an effect. Since His Way began, about 200 residents have been baptized. Bible study and prayer groups meet on a regular basis for anyone who expresses an interest in deeper discipleship.

Still, setbacks are common. Only about 50 percent of the men who start the program will graduate. Many decide to leave on their own, and others are dismissed for hiding smartphones, failing drug tests, or dishonesty.

Campus leaders—led by resident director Darryl Floyd, who arrives on campus at 4:30 in the morning and leaves at 8:30 at night—enforce discipline, ensure dormitories are clean, take men to work and appointments, and do “on-the-spot counseling.” High-level offenses end up on Floyd’s desk.

Men can’t break free of addiction without discipline. But there is also grace. If a man sneaks in a smartphone, for example, he can sign a contract acknowledging he made a mistake and pledging to change. If he violates the contract, he is dismissed. He can reapply for the program after 30 days.

Success isn’t just about graduating. Some men receive a certificate and then go back to their addiction. “Success stories to us are guys taking on Christ 100 percent and changing their life, giving back to their community, becoming the kingdom man that he’s supported to be,” said Floyd. 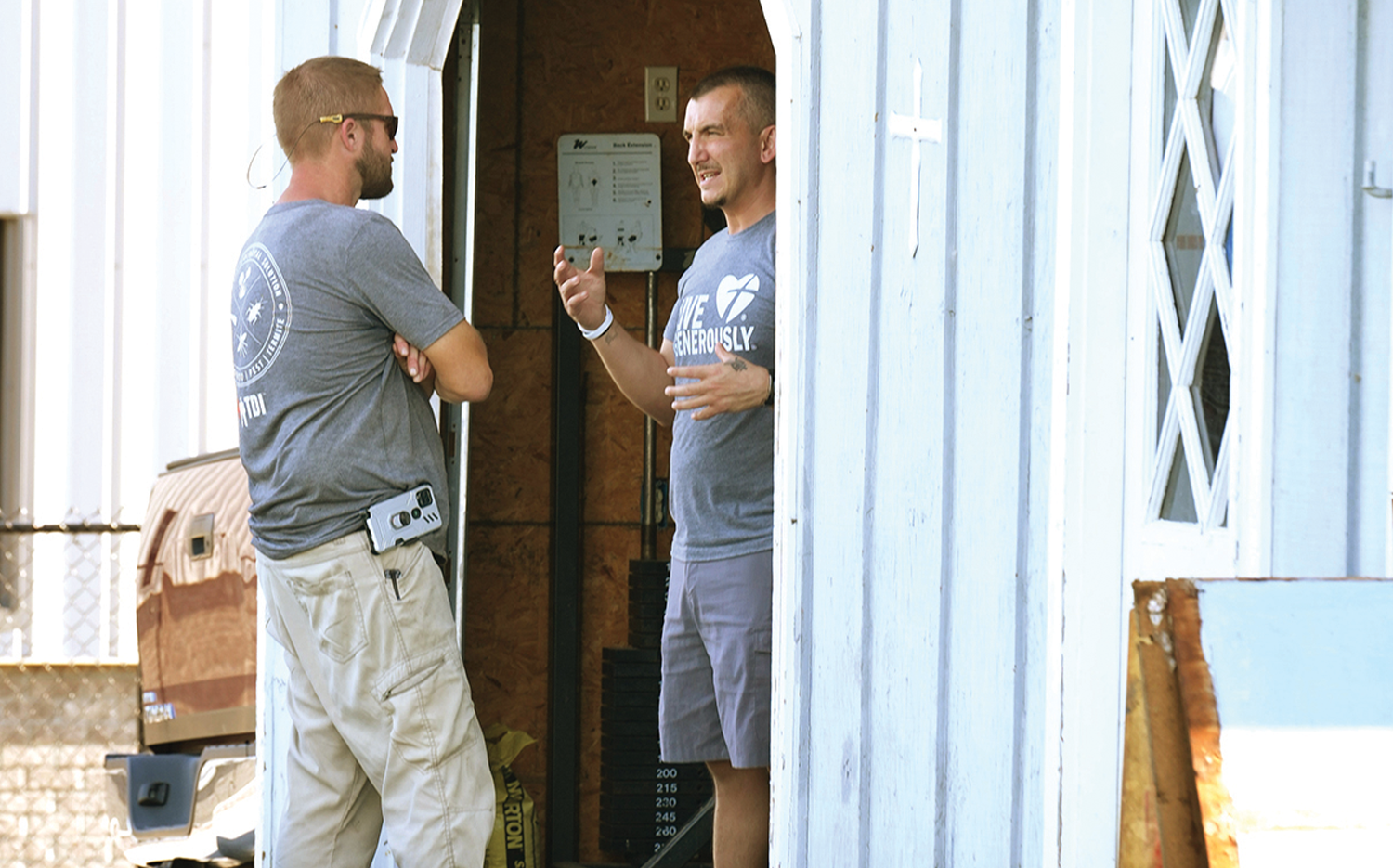 DOUG STOGNER UNDERSTANDS the challenges all too well. “My phone rings off the hook from guys who have fallen.” Men do well in the program, but they may begin struggling within days of leaving. It is difficult to help men understand how to live out at home what they learned at His Way.

Stogner relapsed himself, going to prison for five years. In 2016, he went through the program he had helped design. At the time, most of the men didn’t know their fellow resident had helped design the program or that much of the furniture in the buildings was his. “I was so relieved when I came back,” Stogner said. “It was the best homecoming I could imagine.” Now he is reunited with his children.

Many men have relapsed and attended the program more than once. To transition out of the program successfully, men need accountability and community. Throughout their time in the program, men attend “family meetings” with a group of outside friends or relatives who know the resident well and are supporting his sobriety.

At the first meeting, Reynolds takes time to learn about the resident from the family while the individual sits outside the room. During the second meeting, the family and individual talk about what led to the addiction and the consequences. Later on, residents fill out a “success plan questionnaire.” The men discuss this with members of their group who can help them avoid old habits and triggers.

Across the street from the facility are three houses where men can rent a room when they graduate. Most stay about a year. Getting involved with a local church is also essential. They want the men to come back after they’ve graduated, for accountability and community. One slip-up doesn’t mean a closed door.

“Ultimately, sobriety is not about the absence of drugs and alcohol. Sobriety is about having a right relationship with God and being rightly aligned. And that’s about honesty, it’s about integrity, it’s about those kinds of things,” said director Reynolds. “It’s about character transformation, because when that changes, alcohol and drugs become irrelevant.”

McDonald first graduated from His Way in 2012. But then he relapsed again. 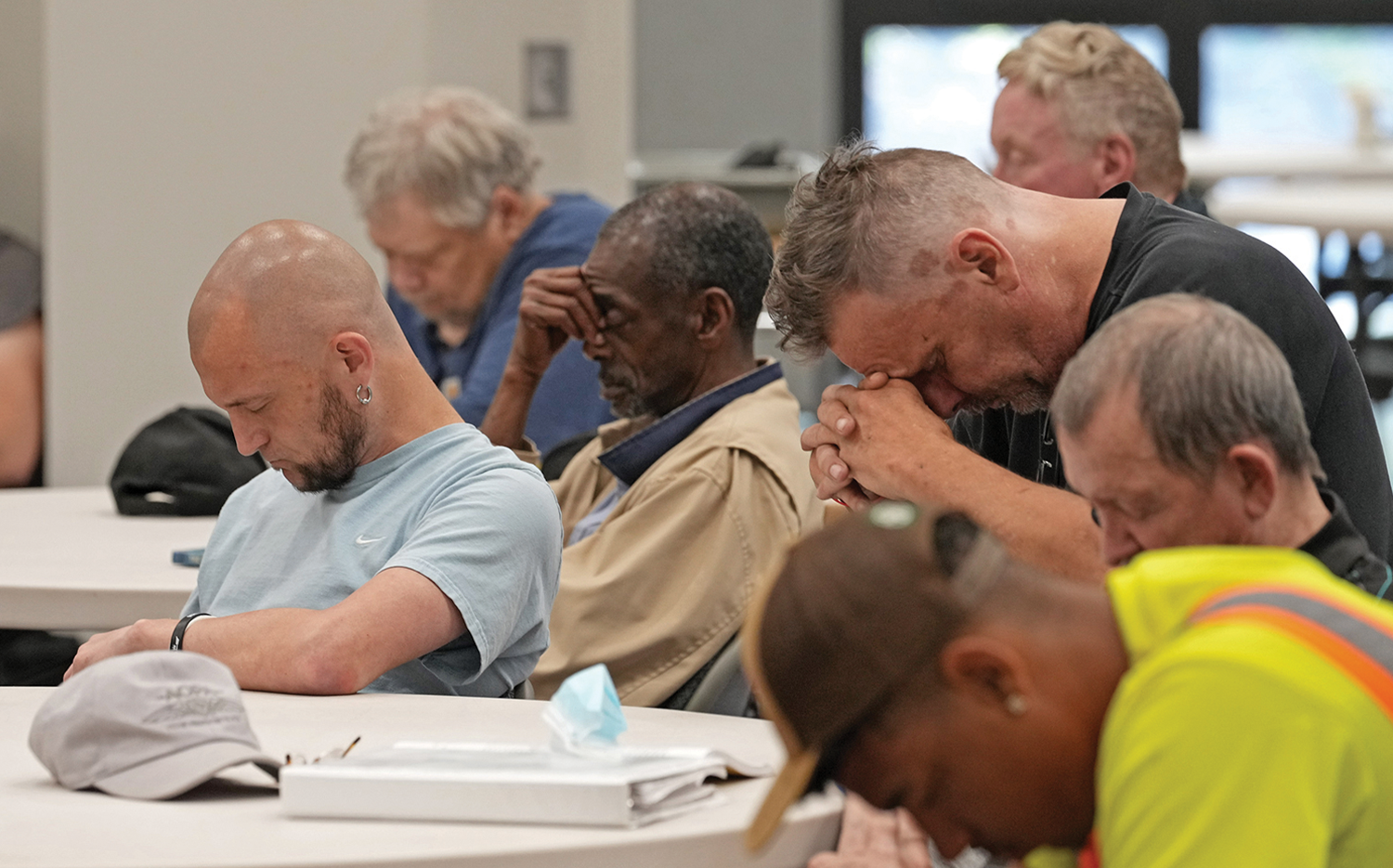 Men bow in prayer at an evening class. Larry McCormack/Genesis

Now he’s back. On Day 1, McDonald sat in the 8 a.m. Bible class with Tom Reynolds and thought: “I want to get high. Why am I sitting in this class? That was interesting. That’s a good point. Man, I want to get high.”

But soon, he started taking notes. “It’s weird because I’ve got a drug problem, I come to His Way, and you send me to a Bible class. Why?”

McDonald noted that typical AA meetings emphasize the importance of finding a higher power. It can be anything—even a doorknob, as some suggest.

“No. The doorknob can’t. Jesus is and can,” McDonald said.

By week four, he called his parents and asked them to send him a new Bible. He did devotions every night. He wanted to tell others.

His days now are full working as a house manager at His Way and an assistant manager at the Saving Way thrift store, where he supervises 10 other men and meets with them every two weeks to assess goals and ask how they are doing. They all have similar struggles: drugs or alcohol, ruined relationships, no money, legal trouble.

McDonald reminds them: They are not alone. He is right there with them.

—Read about WORLD’s other 2022 Hope Awards winners in this issue.