As evidence mounts of Chinese genocide against Uyghurs, some call for a boycott of the 2022 Beijing Olympics

Attendees look at an exhibit at a visitors center at the Winter Olympic venues in Yanqing, China, on the outskirts of Beijing on Feb. 5. AP Photo/Mark Schiefelbein

One year ahead of the 2022 Winter Olympics in Beijing, human rights groups and lawmakers in the United States, the United Kingdom, and Canada are calling for a boycott of the games over China’s human rights abuses.

Last week, parliaments in the Netherlands and Canada voted to declare the Chinese government’s treatment of minority Uyghurs constitutes genocide. Canadian lawmakers also passed an amendment calling on the International Olympic Committee (IOC) to move the Winter Games from Beijing if the genocide continues.

Chinese authorities have sent more than 1 million Uyghurs and other ethnic minorities to reeducation camps in Xinjiang, a region in China’s northwest. The region made headlines again recently as survivors and a former guard revealed the extent of rape, sexual abuse, and torture in the camps.

With Beijing set to host the Winter Games, some critics compare the situation to the 1936 Olympics in Berlin, when the United States and other nations gave Adolf Hitler a platform and legitimized the Nazi regime by competing in the games. At the time, the Nazis had already enacted discriminatory policies against Jews and the disabled.

Now the question is whether to allow another authoritarian dictatorship host the games.

Earlier this year, the United States declared China’s treatment of Uyghurs to be genocide. Republican lawmakers in both the House and Senate have introduced resolutions calling for the 2022 Winter Games to be moved out of Beijing.

Rep. John Katko, R-N.Y., ranking member of the House Homeland Security Committee, sent President Joe Biden a letter on Feb. 22 with a similar message. “Participation in an Olympics held in a country that is openly committing genocide not only undermines [U.S. and international] values but casts a shadow on the promise for all those who seek free and just societies,” Katko wrote.

In the United Kingdom, Liberal Democrat leader Ed Davey and Labour Party lawmaker Chris Bryant called on British athletes to boycott the games. Davey noted sports can’t be separated from politics in the face of genocide, pointing to a 1938 soccer match in Berlin where the English team gave the Nazi salute in front of 100,000 spectators.

In Canada last week, Prime Minister Justin Trudeau and most of his Cabinet abstained from the genocide vote: Trudeau said the term genocide is “extremely loaded” and said further examination was needed.

China has continued to deny any human rights abuses in Xinjiang, claiming the camps are “vocation training centers” and churning out propaganda videos showing Uyghurs dancing and smiling.

But a BBC report last month painted a different picture of the camps. Tursunay Ziawudun, a former Uyghur detainee, said men would come to cells after midnight, pick the women they wanted, and rape them in a room without surveillance cameras. She said masked men gang-raped her multiple times, and someone tortured her with an electric prod stuck into her genital tract.

When the Associated Press last September asked the IOC about its decision to hold the games in Beijing, the organization defended its position, stating that “awarding the Olympic Games to a national Olympic committee does not mean that the IOC agrees with the political structure, social circumstances or human rights standards in the country.” It added it must remain “neutral on all global political issues.”

With the IOC seeming unwilling to budge, 180 human rights groups—including those representing Uyghurs and the regions of Hong Kong, Tibet, and Taiwan—signed an open letter last month calling on world leaders to boycott the 2022 Olympics. 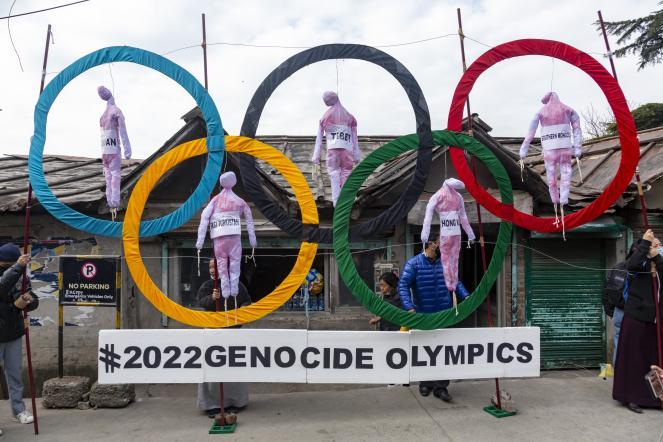 The groups said they have informed the IOC about China’s abysmal human rights record for the past two decades, advised it against awarding China the Olympic Games, and warned it not to trust any promises that China would allow greater freedoms. Yet the IOC has now twice given Beijing the honor of hosting the world’s largest sporting competition.

“The IOC refused to listen in 2008, defending its decision with claims that they would prove to be a catalyst for improved human rights,” the letter read. “This decision proved to be hugely misplaced; not only did China’s human rights record not improve but violations increased substantially without rebuke.” The letter pointed to the concentration camps in Xinjiang, the surveillance state in Tibet, and the crackdown on the pro-democracy movement in Hong Kong.

An editorial in the Chinese state-owned Global Times said China would retaliate fiercely against any country that decides to boycott the games. It called the boycott efforts an “evil trend” encouraged by “extreme forces.”

The Chinese government may deny human rights abuses in Xinjiang, but some Chinese are beginning to question the official narrative. A new invite-only audio-chat app, Clubhouse, is helping.

After the BBC last month reported on systematic rape in China’s reeducation camps, several Clubhouse users created a Mandarin-language chat room in the app to discuss the camps. Thousands of people—some from inside mainland China—listened in as members of the Uyghur diaspora started sharing their experiences.

Halmurat Harri Uyghur, a Uyghur doctor and activist in Finland, described how authorities sent his parents to the camps. Many Han Chinese listeners on the app were deeply moved, some crying and apologizing for what was happening to Uyghurs. (The doctor said this contrasted with what he experienced on Twitter, where Chinese trolls would attack him for his posts.)

One Han Chinese man in the chat room initially wanted to defend China’s policy, but after hearing the stories of others, he changed his mind, according to Voice of America. He apologized and asked how he could help Uyghurs.

In other Clubhouse rooms, mainland Chinese had civil conversations with Taiwanese, Hong Kongers, and the Chinese diaspora about taboo topics in China—the Tiananmen Square Massacre, Taiwan’s status, and the crackdown on Hong Kong.

The Chinese government subsequently blocked internet access to Clubhouse in China, yet some are still able to join using VPNs.

Halmurat Harri Uyghur said being on Clubhouse felt like talking to someone on the phone—even if they disagreed on something, they could talk it through. “It gave me encouragement,” he said. “It proved what I’ve been trying to tell others: We all are human beings despite our different ethnicities and faiths.”