Wong is detained during a protest at a monument symbolizing the city’s handover from British to Chinese rule. Damir Sagolj/Reuters/Newscom

While Wong is the most well-known internationally, appearing on the cover of Time in 2014 as “The Face of Protest,” Chow was another main organizer of the Occupy Central campaign and the secretary-general of the Hong Kong Federation of Students. Law, who succeeded Chow as the secretary-general, went on to win a seat in Hong Kong’s Legislative Council in 2016, yet the Chinese government disqualified him from the position after he altered the wording of the oath of office during his swearing-in ceremony.

Wong is open about his Christian faith and how it catalyzed his activism against Beijing’s tightening control over Hong Kong. Growing up in a Christian home, Wong learned about evangelism from his father. With his church, Wong distributed rice dumplings and mooncakes to the needy. In the 2017 documentary Joshua: Teenager vs. Superpower, Wong recalls visiting and praying for a poor family when he was 13 and returning the following year to find their situation unchanged.

That’s when he decided to try to bring social change through action. He created the student group Scholarism to protest the implantation in Hong Kong of a national education curriculum featuring textbooks that praise the Chinese Communist Party, criticize democracy, and do not mention the Tiananmen massacre. Scholarism and 30 other groups organized a march in 2012 that attracted 90,000 protesters who called on the Hong Kong government to cancel the curriculum. In the end, then-Chief Executive Leung Chun-ying revoked the 2015 deadline for schools to start teaching the curriculum. 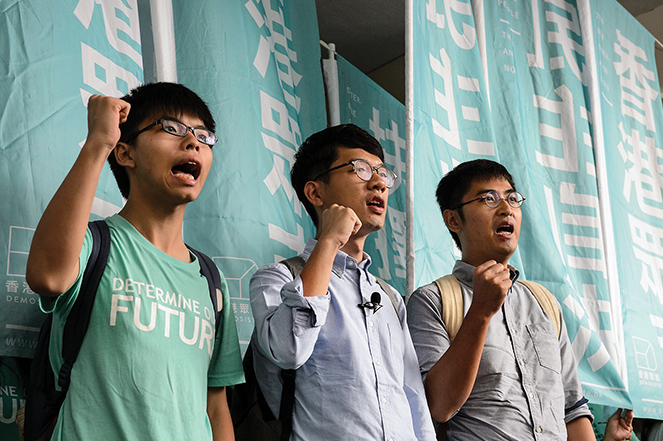 Wong, Law, and Chow (from left to right) in 2016 outside the Eastern Court in Hong Kong Anthony Wallace/AFP/Getty Images

Wong co-founded in 2016 the pro-democracy political party Demosistō, which supports self-determination (the belief that Hong Kong citizens should decide for themselves how Hong Kong should be governed after it is fully returned to China in 2047). The Sino-British treaty stated that after the 1997 handover, China would give Hong Kong a high degree of autonomy for 50 years. This is a promise China has been more and more shameless in breaking in recent years.

Wong fears what will become of Hong Kong’s historically robust religious freedom. Churches are now a common sight in Hong Kong, and mainland Chinese Christians cross the border to attend large conferences and evangelism trainings here. “Without a sound, democratic system, we don’t even have freedom of religion,” Wong said in 2014. “We don’t even have the chance to evangelize publicly.”

Demosistō member Derek Lam recently wrote a New York Times op-ed titled “I Won’t Make Jesus Bow Down to Xi Jinping.” He wrote that he has wanted to be a pastor since he was 16 and studies theology at Chinese University of Hong Kong, yet he fears he may soon be imprisoned and barred from becoming a pastor. Authorities arrested Lam after he led a protest against Beijing’s involvement in kicking out pro-democracy legislators.

“Although there is nothing I would love more than to become a pastor and preach the gospel in Hong Kong, I will never do so if it means making Jesus subservient to [Chinese President] Xi Jinping,” Lam wrote, noting that even Christian youth camps in Hong Kong include the waving of China’s flag, singing of its national anthem, and praising of the “motherland.” “I will continue to fight for religious freedom in Hong Kong, even if I have to do it from behind bars.”