U.S. soldiers praying at an Army base in Wiesbaden, Germany Ralph Orlowski/Getty Images

McHugh Boulevard is a worn strip of pavement in the heart of Camp Lejeune, N.C. On an adjacent side street, a dozen brick buildings flank the curb. Light spills from the second story of one, where wives and parents huddle, making occasional trips to a table of powdered donuts and not-so-hot chocolate. It’s past midnight, and they are waiting for the return of Charlie Battery of the 10th Marines, an artillery detachment that has spent the last six months in southeast Asia.

One who waits is not a relative: He’s Tom Scaife, a graying Marine whose enlistment ended nearly 30 years ago. Scaife runs Missions to Military, Inc., a ministry in nearby Jacksonville that helps disciple military members at a time when chaplains are often too busy to provide basic discipleship and community.

Parachurch organizations focusing on the military are nothing new. The Navigators began an outreach to sailors in 1933. Cadence International has been around for more than 60 years. Ron Crews, executive director for the Chaplain Alliance for Religious Liberty, says: “Not all churches have a heart for this type of work. These centers become a primary place for new believers to plug in.”

Scaife felt the call to military ministry when his son began attending The Citadel. He’d been a pastor for 12 years, had a doctorate from Southern Seminary, and was certified as a counselor. But more than any academic credential, Scaife’s four-year enlistment prepared him to relate to Marines and sailors: “The military culture says step on the guy next to you, and do better than he does. … It says spend your money foolishly, rather than be good stewards. I’m here to encourage them to fear God more than man, and to live out the gospel credibly.”

A lot of that teaching happens over meals cooked by Scaife’s wife Kyung. They offer Bible studies, marriage classes, and financial seminars dealing with the unique challenges of military life. They discuss Stuart Scott’s Killing Sin Habits, important preparation for the environment they face during deployments. 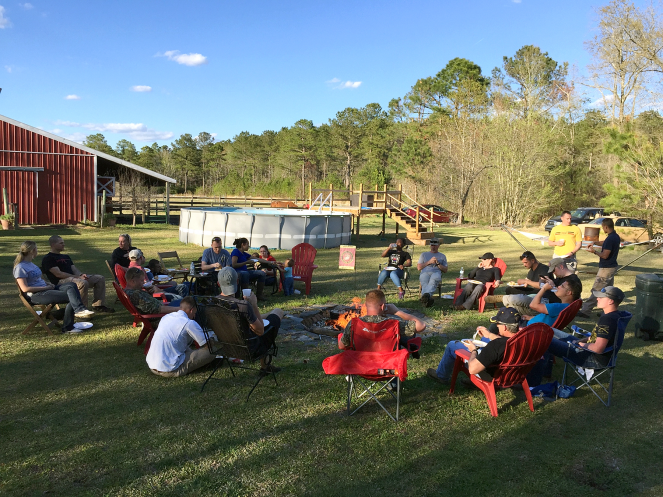 Marines at a Missions to Military bonfire in North Carolina Handout

Two days before Charlie Battery’s early morning return to Lejeune, the group of Marines had been training on the island of Okinawa. Less than half the size of Rhode Island, Okinawa hosts some 13 military installations, but Charlie had been housed primarily at one—Camp Hansen, which gained notoriety in 1996, when three American servicemen stationed there were convicted of the kidnapping and rape of a 12-year-old Japanese girl.

Okinawans still complain about the base, but local merchants also profit from its vices. Located just a short walk from Hansen’s main gate, Kin Town is known by Marines as “Sin Town.” Jesse, 20, a corporal on his second duty assignment, says the area offers bars, strip clubs, tattoo parlors, and a handful of restaurants catering to drunks: “Kin is where everyone on base goes to do whatever they want, because they have the mentality of ‘what happens in Kin, stays in Kin.’ … Most on this base believe that if there is a God, He has left Camp Hansen.”

For Christians like Jesse, isolation is a real part of their military experience. Evangelicals are a rarity in most units. Marines who don’t swear or drink feel excluded from social gatherings. Peter, a seasoned gunnery sergeant with 17 years of service, says pride is also an issue: “The fruits of the Spirit are seen as weakness in the personality of a Marine.”

Darrow and Vicki Frazier direct the Hansen Christian Center, a Cadence International outpost just 500 yards from the base. On Friday nights, the couple hosts Bible studies, and some weeks as many as 40 Marines, airmen, soldiers, and sailors attend. Home-cooked meals provide a draw for the all-singles crowd, and the kitchen has a stove and well-stocked refrigerator, but no dishwasher—on purpose. Vicki says relationships are built over that chore, and they’re built using first names—no “yes, sir,” “no, sir,” or ranks. Bible study attenders run the gamut, from boots on their first assignments to decorated colonels. Dropping designations makes everyone more comfortable.

Some visitors arrive at the center looking for outings like rock climbing at Hedo and trips to Okinawa’s famous aquarium. Others have pressing needs. “We’re all broken, but a lot of your Marines are really broken,” Darrow Frazier, a veteran himself, says: “They become Marines to prove something to whoever broke them”—like the divorced parents who had a female Marine sleep outside with the dog, or the revolving door of mother’s boyfriends who abused a male Marine.

The center celebrates a lot of the 19th and 20th birthdays of Marines who “struggle with knowing what a family is and should be, but they still want one.” The center becomes that family, and it helps them deal with difficult things. Just last year, an Osprey aircraft crashed in waters near Hansen, requiring participants of the center to help in the cleanup. Some suffered skin burns from gas during the dive. Frazier says those kinds of experiences often lead to moments of soul searching and receptivity. He’s glad to be there when they do. 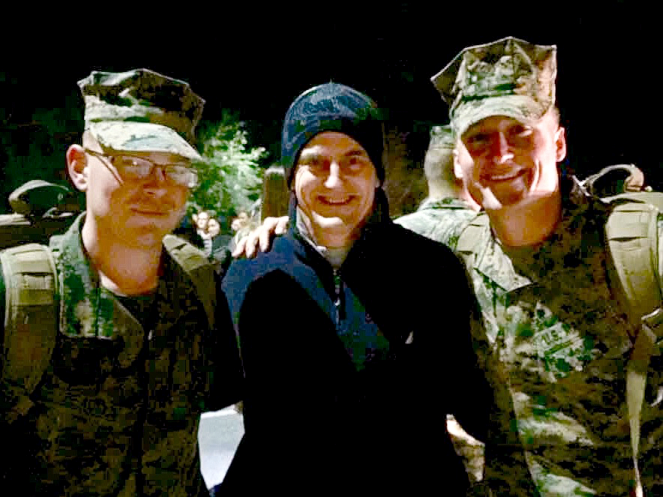 Marines at a Missions to Military bonfire in North Carolina Handout

Back at Camp Lejeune, Tom Scaife was still waiting at 3 a.m. as the crowd piled outside. The sound of “low, righty, low” grew closer. A formation of 122 Marines halted, did a left face, and was dismissed. It became clear why he was still there in the early hours: Two of his regulars, Josiah and Jonah, both lance corporals and both younger than 20, greeted him with hearty handshakes.