Back to the sources

WORLD has received a bunch of letters asking about popular Christian writer Ann Voskamp, “Is she a serial plagiarist”? The short answer is “No,” but a couple of examples of minor plagiarism should give authors and publishers new determination to take great care in attributing stories and wordings to their creators. 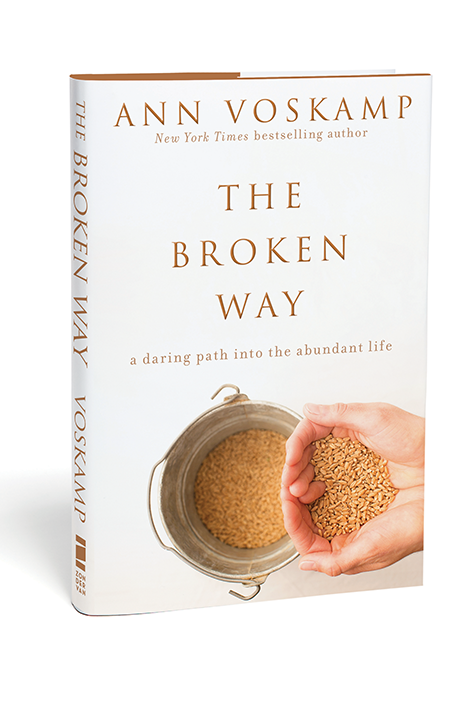 One area of talk about Voskamp arose out a paragraph in Chapter 1 of her best-selling book The Broken Way (Zondervan, 2016), which explains how personal brokenness is often essential for spiritual progress. It’s not a new thought, but Voskamp conveys it poetically, and climaxes the theological musing with a homely lesson about seeds that her farmer-dad gave her: “For a seed to come fully into its own, it must become wholly undone. The shell must break open, its insides must come out, and everything must change. If you didn’t understand what life looks like, you might mistake it for complete destruction.”

It wouldn’t be surprising for Voskamp’s dad to say something like that, but the problem is that the words attributed to him matched almost word for word the writing of author Cynthia Occelli on her social media pages. It appeared that Voskamp (or perhaps a researcher for her) had copied the seed quote from Occelli and then put those words into her dad’s mouth.

When Occelli found out, she contacted Zondervan. She was particularly upset by a Zondervan promotional video featuring Voskamp telling the seed story as coming from her dad: “The passion and drama with which she speaks my stolen quote are nauseating.” Occelli has an uphill battle to reclaim the quotation, because Occelli has 60,000 Facebook fans to Voskamp’s 488,000. (Voskamp turned down my request for an interview, and Occelli did not respond to my attempts to contact her.)

The problem: Some readers probably missed Voskamp’s apology, submerged as it was in a long scroll of a post concerning a family trip to Israel, a Tim Keller talk, a Mister Rogers quote, Instagram photos from fans raving about her books, and more. The item’s burial was too bad, because this was a teachable moment about likely dangers at a time when internet files can be copied and mislabeled so readily, with unclear attribution. It’s not hard months later for a popular writer, under intense pressure to fulfill fans’ and publishers’ demands, to throw into the breach a story that her dad could have told—but it wouldn’t be word for word from what someone else wrote.

That wasn’t the only time Voskamp has without attribution used the work of others. In January she wrote a blog post about sexual abuse and listed “nine theses for assault in the church,” using a list from seminary professor Wade Mullen with only slight rewordings, and did not attribute any of it. In this case Voskamp apologized quickly in a blog post several days later. She said she was in “vulnerable grief” about sexual abuse in the church when she wrote the post, that she “lyrically paraphrased and used some phrases” of Mullen’s, and that “my heart sincerely and humbly and relentlessly apologizes.”

Inexplicably, that post where she apologized is now deleted (the archived page was still available on the Wayback Machine). The blog Jules’ Diner documented this and some other minor incidents, like a 2017 talk where Voskamp appeared to use some ideas from philosopher James K.A. Smith without attribution. When someone brought up the similarities of her speech with Smith’s writing, Smith tweeted, “I’m sure there’s a footnote in her heart.”

Given that talk about Voskamp’s errors was spreading, I ran the plagiarized section of The Broken Way through iThenticate, the plagiarism detection software that is publishing industry standard, and caught no other unequivocal cases of misappropriation. I ran Voskamp’s five major books through another plagiarism software, Grammarly, which checks materials against what’s available online. Bottom line: No other instances of plagiarism popped up in her books.

The Voskamp file suggests that publishers and writers both have responsibilities in this brave new world. Zondervan, caught red-handed with The Broken Way’s plagiarized passage, deleted the plagiarized part from digital editions entirely—this is apparently common practice when publishers find instances of possible plagiarism. If you download a Kindle edition of The Broken Way today, it will not have the story about Voskamp’s dad and the seed.

Zondervan also removed the YouTube video promoting the book where Voskamp told this seed story about her father. Zondervan, owned by HarperCollins, declined to comment for this story.

Curiously, when I ran Voskamp’s plagiarized text from The Broken Way through iThenticate, the software did not detect the plagiarism. Others in publishing say it’s not unusual for software to miss such obvious cases. The situation underscores the ongoing difficulty with catching plagiarism in publishing, even with new plagiarism software that has vast digital resources to flag these problems.

“The best defense against plagiarism is good software combined with good editors,” said Ben McCoy, managing editor at InterVarsity Press. InterVarsity runs all of its manuscripts through iThenticate, but McCoy has found gaps in the software’s ability to detect plagiarism as well.

Multiple people in the publishing industry I talked to want better plagiarism software, but nothing appears to be in the works. Publishers tend to rely on authors to abide by their contracts, which include stipulations against plagiarism or poor attribution. And now in a digital age, they can edit problems post-publication without attracting much notice.

Two years ago WORLD investigated whether Christian publishers use plagiarism software, and at the time most of the “big five” publishers like HarperCollins did not as a matter of habit, while smaller publishers did. Zondervan said that it used software if editors found red flags in a manuscript, but not on every manuscript.

ZONDERVAN HAD ANOTHER RECENT PLAGIARISM ISSUE with an author with a big online following who appears to have taken material from a lesser-known author. In May, author Carey Scott filed a lawsuit against Zondervan, HarperCollins, and Zondervan author Christine Caine. Scott alleged that Caine had directly copied one section of her book, and in addition had copied her book’s “theme and presentation.”

Both women have written extensively about similar issues, such as women dealing with shame.

Caine is well-known in women’s ministry and founded the anti-trafficking organization A21 with her husband Nick Caine. Caine has a raft of books and 733,000 followers on Facebook—Scott has 4,300 Facebook fans. Scott has had a career in ministry to women but was a first-time author with her book that was in this lawsuit.

The lawsuit reads like the old Abbott and Costello “Who’s on First” routine. Scott alleged that Caine’s 2016 book Unashamed copied from Scott’s 2015 book Untangled. Scott further alleged that Caine’s 2017 book Unshakeable contains some of the same “infringing passages” from Unashamed, according to the lawsuit, including the part that was a direct copy in Untangled. Caine has other books titled Undaunted, Unstoppable, and Unexpected and Scott has two newer books, Unafraid and Uncommon, but happily for those parsing this lawsuit, those books were not implicated.

In late September, the parties reached a private settlement, although they were still in the final stages of handling that settlement and dismissal of the case in October. The lawyer for Zondervan declined to comment on the details. Scott’s lawyer did not respond to a request for comment.

According to Scott’s lawsuit, she was a fan of Caine. She learned of the “infringement” of her work two weeks before Caine’s book released when she got a promotional email for Caine’s book that included a video with verbatim text from Scott’s book. Scott alerted Zondervan.

Thirty thousand copies of Unashamed had already been printed, according to the lawsuit, but Zondervan agreed to edit the section for future copies and also removed the promotional video with Scott’s text. Scott’s lawsuit said Zondervan had “immediately corrected” the direct plagiarism in e-book versions.

But then Scott alleged that Zondervan published Caine’s next book, Unshakeable, with the same directly copied passage from Scott’s 2015 book that Zondervan had edited out of the previous book, and says other themes and ideas from her book appear throughout Caine’s 2017 book. Caine did not return a request for comment.

For all of this, Zondervan has a reputation of responding quickly to plagiarism accusations. In October last year, Andreas Köstenberger reported his own plagiarism to his publisher, Zondervan—or what Zondervan called “a series of inadvertently unattributed references”—in a Biblical commentary on the Gospel of John. Köstenberger had failed to cite a commentary from D.A. Carson several times, a failure he attributed to inadequate note-taking.

Zondervan went through Köstenberger’s part of the commentary and found the problems were too “extensive” to fix. In December, Zondervan pulled the book out of print. Köstenberger issued a public apology, apologized to Carson, “my esteemed mentor and friend,” and also said he made “financial restitution” to Carson and his publisher.

Köstenberger had written about plagiarism in a 2011 book, Excellence: The Character of God and the Pursuit of Scholarly Virtue. Addressing young Christian scholars, he wrote, “It is those engaged in biblical and theological studies who should hold to impeccable standards when it comes to respecting and referencing the works of others.”

For those who say they would never plagiarize, he pointed to the easy pull of “laziness” about researching sources—leading to a last-minute rush to research and pulling from indiscriminate sources.

“Sin has a way of increasingly desensitizing and deceiving us as to its growth and consequences,” he said.

Bottom line regarding Voskamp, a wonderfully sensitive observer of life: She has now been sensitized on plagiarism, and she should now double-check all her new writing with the plagiarism shadow looming over her. If going slower to eliminate misappropriations causes her creative output to decline by 10 percent, that’s the tithe writers must pay to preserve their good name.

—with additional research by Brendan Ribera and Rachel Beatty