Music and art programs offer creative outlets to the blind, disabled, and homeless

Patience, A Fruit of the Spirit by Nancy West (acrylic on canvas) Imagine Art

Austin, Texas, styles itself “the live music capital of the world” and a haven for painters and sculptors as well. So do other aspirational cities that have followed a New Urbanism script: gain an artsy reputation so the talented, young, and beautiful will follow. But what about those left behind yet also made in God’s image, including the blind, the disabled, and the homeless?

We visited three Austin institutions: The 164-year-old Texas School for the Blind and Visually Impaired (TSBVI), with a capacity of 160 students ages 7 to 19. The 24-year-old Imagine Art ministry for those with physical or mental disabilities. The 30-year-old Art From the Streets project for homeless men and women. We then took a quick look at what’s going on nationwide.

AT TSBVI, JAZZ PIANO NOTES filled the hall as students with backpacks and water bottles filed in and grabbed seats. The white sticks they carried quickly dispelled any impression of a typical music or art class. One of the youngest students left his cane on the cane rack and used “protective technique”—clasping both hands and holding them out at chest level to serve as tactile sensors—to find his seat.

Projects on display engaged the senses: A 3D mural uses brown spoons to make up the trunk of a tree, with four yellow spoons—handles snapped off—forming the petals of a flower. Three students held close to their faces the clay mugs they are creating.

In a music classroom, five students recited without music the first stanza of the classic song “Autumn Leaves.” Teacher Jeremy Coleman then grabbed a classical guitar and played softly to complement the student voices. Their faces showed intense focus, with two students rocking gently back and forth.

Creating sound without sight demands special training. Sighted persons see how musicians hold and finger instruments, but blind students at first need teachers to position them physically and move their fingers the right way. Would-be pianists do best after they have explored the insides of a piano and felt the strings and the hammers.

But sometimes it’s an advantage to go to school with students who can’t see you. One TSBVI teen, Zaid Garcia, is not only blind but has skin horribly burned after a candle started a fire. Zaid has no nose, eyes, hair, or hands, but as he made his way slowly down the hall, no one recoiled. One student said he’s the most popular student in the school. 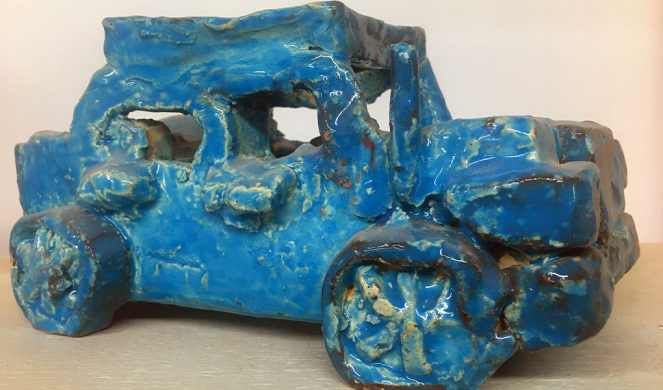 PAINTINGS AND DRAWINGS cover the walls at Imagine Art. The pieces created by more than 80 artists, most with various physical and mental disabilities, range from what proud parents would post on refrigerators to fine works worth gallery display. Monthly shows help the artists sell their creations.

One of the regulars, Larin, is a Hispanic man in his 30s who wore a baseball cap with the bill tilted off his forehead. Larin is blind, deaf, and autistic, but he makes ceramic cars that resemble the old Ford Model Ts. He sat at a table wedging the clay to thump out the bubbles. His instructor, Owen Moon, talks to Larin by tracing letters on his hand, the way Anne Sullivan taught Helen Keller.

In another room a volunteer showed Tasha, who has Down syndrome, how to use a sewing machine. AmeriCorps worker Kat Cunningham said Tasha, who is in her 30s and had never learned to use a ruler, was forming her own micro business. Tasha’s most popular product is a felted bag called the Everything Pocket.

Founder and CEO Debbie Kizer, 52, a former drug addict and now a Christian, envisions Imagine Art as an “integrated community” for both the disabled and nondisabled. She won’t say “students”: Everyone is an “artist.”

People who were historically perceived as unemployable, non-viable citizens, are today creating visual evidence of the depth and wealth of the creative human spirit.

THE ATMOSPHERE IN Art From the Streets is calm and relaxed—radically different from life in the streets. One regular, Dennis Milecki, has painted there for three months. Asked how long he’s been an artist, Milecki responded: “Several lifetimes maybe, who knows?” He only draws faces, mostly mugshot-style, since he wants to show people at their lowest point: “They’ve been arrested and don’t know if they’ll ever see the outside of a cell again. Yet, there’s hope in each face. Fortitude. Perseverance.”

Jack Hurd, a 65-year-old veteran who paints vivid watercolors, said he was destitute and addicted five years ago. After doing drugs in Cambodia, Hurd used cocaine and heroin, ruined his family, and moved from city to city as a “bum. … I was the person other people step over to cross the street.” A Veterans Affairs program helped him, and he had a VA administrative job from 1999 to 2009. Hurd remarried, but “I was prideful so I drifted out of the marriage.” Back on crack, he went through a rehab program and started painting, which helps him “stay clean and love other people.”

Kerensa, 40, lives in a tent under a bridge and mourns the loss of her parental rights to a son who’s now 3. She was drawing a self-portrait that displays a bleeding mouth, face and neck sutures, and other wounds. Jerry Hurta, 64, told stories of selling a painting to Lyndon Johnson and smoking marijuana with John Denver. He met his wife at a Bible study run by Church Under the Bridge.

Art From the Streets calls its homeless regulars “artists” and hosts public art shows by which gifted amateurs become professionals: One artist made $1,400 last year. 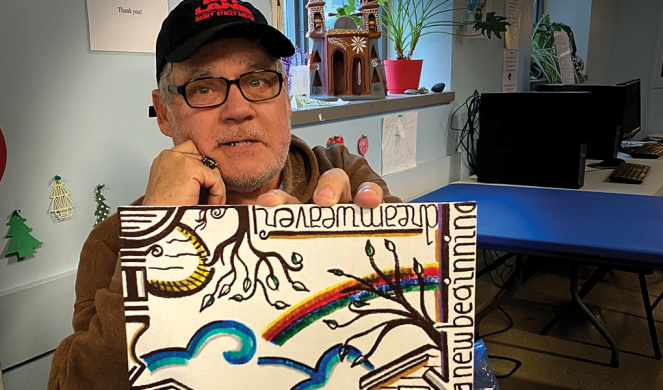 AUSTIN IS NOT THE ONLY CITY where organizations use art and music to help those with distinctive challenges. For at least two centuries music has played a large part in teaching the blind. The 1837 report of the Perkins School for the Blind in Massachusetts noted that pupils devoted four hours daily to intellectual labor, four hours to manual labor, four hours to recreation and eating—and four hours to music. In 2018 The Journal of Visual Impairment & Blindness reported on 29 schools with music classes for students with multiple impairments.

Art studios for those with disabilities emerged in the 20th century. For example, since 1973 Gateway Arts studio in Brookline, Mass., has helped young people with cerebral palsy, spinal cord and head injuries, and visual and hearing impairments. Passion Works Studio in Athens, Ohio, reports: “People who were historically perceived as unemployable, non-viable citizens, are today creating visual evidence of the depth and wealth of the creative human spirit.”

The names of many other programs evoke their mission: Art Unbound in New Jersey, Art Enables in Washington, D.C., Claraty Arts in California, Enrichment Center in North Carolina, Paint a Miracle in Michigan, and Pure Vision Arts and Starlight Studio in New York.

Most art programs for the homeless are 21st-century innovations. In the San Francisco Bay area, DrawBridge offers expressive art programs for children in homeless shelters and safe houses. In Oakland, the elderly and homeless learn to sculpt in a “Healing Through Clay” program. Boston-based ArtLifting sells the creations of homeless or disabled artists to corporations and the general public.

Seriousness of purpose is the common denominator of programs for the blind, the disabled, and the homeless. Jefferson Bright at Art From the Streets said his art routine is key to his two years of sobriety: He comes to “socialize, not hibernate.” Bright recalled turning down a friend’s invitation to a barbecue—that night his friend killed himself. People with particular hardships might fall into dark thoughts, or they might paint luminous landscapes, as Bright does: “They aren’t places I’ve been. They’re in my imagination.”