Anne with an agenda

Let’s get one thing straight: Extrapolating on and even profiting from a classic isn’t new. It isn’t even necessarily a bad thing. Michael Landon did it with Little House on the Prairie, and he’s practically a national hero.

Neither is including a gay character in a historical drama: Downton Abbey did it with the nuanced character of Thomas Barrow, and in the end, we were all rooting for him to rejoin the downstairs staff.

Season 1 of CBC and Netflix’s Anne with an E was gritty, in many ways departing big-time from the book, but it still made pretty good television. Season 2, though, feels as if it were written by a different team of writers, brought in mostly to drive buzz about the show.

It’s hard to list comprehensively every modern issue this season touches on. There’s school bullying, bullying of homosexuals, guns in the classroom, teenage suicide, racism (both overt and via microaggression), white fragility, and the definition of marriage. Two more topics top it off: consent for vaginal checks during birth, and prejudice against people who never marry. 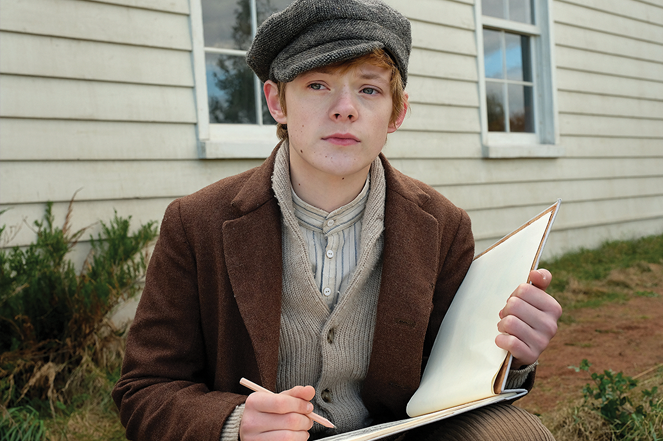 A giveaway to what’s coming is found in the show’s magical opening sequence (featuring an artistic blend of owls, gold leaves, and the image of actress Amybeth McNulty, who plays Anne) where a singer croons, “You are ahead by a century.” A century is right. It’s hard to imagine TV writers of past decades using lines like, “A skirt is not an invitation,” or, “How can there be anything wrong with a life if it’s spent with the person you love?”

As one of the first shows to capitalize on our post-#MeToo world, this one seems not to know how to handle it. It fumbles with dialogue like an awkward teenager. The writing is bad (see above), the plotlines contrived. Writers might think they’re bravely breaking barriers, but they’re really just taking their values—the good and the bad—and cracking them over our heads like a school slate.

Not every storyline is insidious. But nowhere does the show feel more forced than with the character of Cole (Cory Gruter-Andrew), a sensitive and artistic classmate who supplants Diana (Dalila Bela) in Anne’s life—in essence, replacing her kindred spirit with a gay best friend.

Cole attracts attention not only from the class bully, but from attendees at a “queer soirée” (the producers’ term), who drape pearls around his neck. Even his male teacher in Avonlea, the one engaged to Prissy Andrews, has some sort of awakening during a moment of sexual tension with Cole. Eventually Cole is symbolized by a fox being hunted by the whole town, and moves in with Diana’s Aunt Josephine (Deborah Grover)—hinted to be a lesbian last season, and now confirmed to be so.

Redeeming plotlines: a sweet love story, and performances by Geraldine James and R.H. Thomson, who play Marilla and Matthew and shine as the strongest stars of the cast despite some seriously silly storylines of their own. We also get a semi-satisfying ending to the school bully situation. It’s unclear but possible that Cole is basically written out of the show, since, by the end of Season 2, he lives in faraway Charlottetown.

No doubt producers think Anne with an E champions the marginalized. But it won’t stand the test of time—not simply because it politicizes Avonlea, but because it’s poorly written. And Anne would never stand for that.