Craig Rucin sank into an armchair and pulled a blanket over his lap. His eyes looked haggard, but he wore a broad smile. He’d been awake 32 hours straight, waiting in the cold to pick up a friend at the Ukrainian-Polish border at Medyka. He waved away sympathy for himself and instead told the story of his former colleague, Ludmilla.

She has a Russian passport, but had lived 20 years in Ukraine and owned a home there. Her nationality made leaving difficult as several refugee organizations wouldn’t assist her. Through Rucin’s connections, she finally boarded a bus of strangers and made the long journey to the border on Ukraine’s western edge. Her journey isn’t over: She plans to travel to her son who lives in Israel, but Rucin’s home in Rzeszow, Poland, is a safe haven along the way.

I greeted Ludmilla when she arrived with Rucin and told her I was glad she was safe. “I’m glad too,” she sighed in heavily accented English. “I’m glad too.” But she didn’t want to shake my hand. “She’s been traveling so long,” explained Rucin. “She doesn’t want to touch anybody because she says she feels so dirty.” Ludmilla made a beeline for the offered shower and then sank into a deep sleep while I talked with Rucin and his wife, Carol Lynn.

The Rucins have been missionaries in Poland for 20 years with the Pioneers, a discipleship missionary ministry that works in partnership with local churches. Through their work, they have connections with mission organizations spread across central Europe. When the Russian invasion began, a friend with Josiah Venture, Dan Hash, called them with an urgent request. The leadership training ministry had staff in Ukraine that were evacuating. Could Craig make the one-hour trip to Medyka and pick them up? Rucin went to pick up those staff, along with some other fleeing Ukrainians, and brought them all to spend the night at his house. Over the weeks since, that scenario has replayed again and again.

The United Nations High Commissioner for Refugees reports that almost 3.5 million refugees have now fled war in Ukraine. (For comparison, the Syrian refugee crisis of 2015 brought 1.3 million asylum-seekers to Europe.) Nearly 2 million Ukrainians have gone to Poland, where local churches have taken in hundreds of thousands, and ministries such as Josiah Venture have pivoted to provide refugee care and placement. 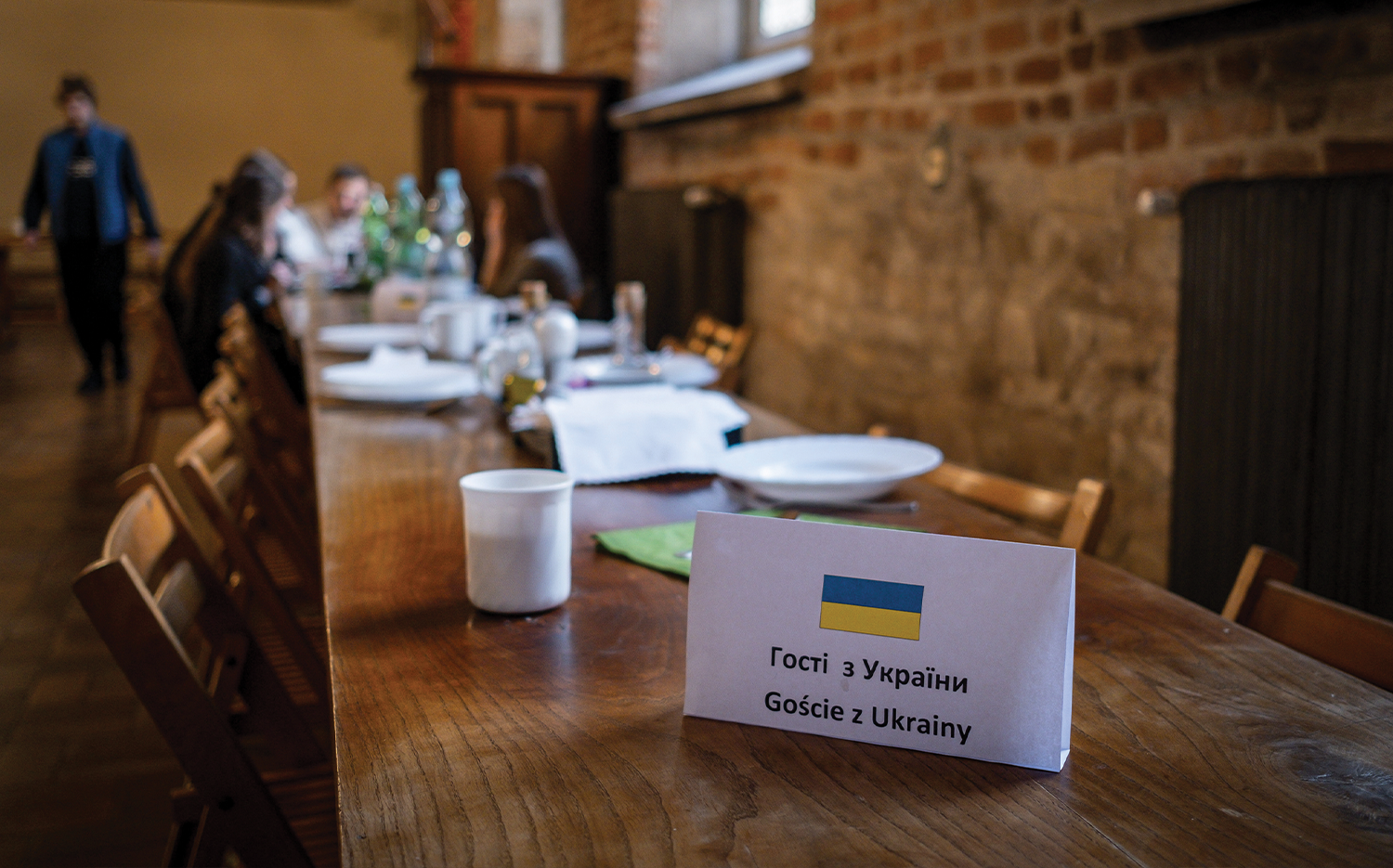 UNTIL A FEW WEEKS AGO, Terry English trained youth leaders for the local church in Ostrava, Czech Republic. “Our ministry has completely switched to caring for refugees coming out of Ukraine,” he said. First it moved out their own field workers, then those worker’s relatives, then neighbors and friends. Because of its built-in network across the 14 former communist countries of central and eastern Europe—including 100 partner churches in Ukraine—Josiah Venture was able to quickly redirect its mostly in-country national staff to refugee relocation. It has two youth training centers, one in Poland and one in the Czech Republic that have been transformed into refugee care centers. After the perilous journey across Ukraine and out of the country, refugees can rest and prepare for their next step. From there English has been working to place refugees with churches in Slovakia, the Czech Republic, and now further afield as churches in those two countries and Poland fill up.

“Now we’re looking at helping to move people into western European countries,” said English. That’s hard to sell to Ukrainians who don’t want to go even farther from home: Most want to stay in Poland once they cross the border and feel safe. But with Polish churches full to bursting and Polish social infrastructure strained, the reality is that people will have to keep moving. 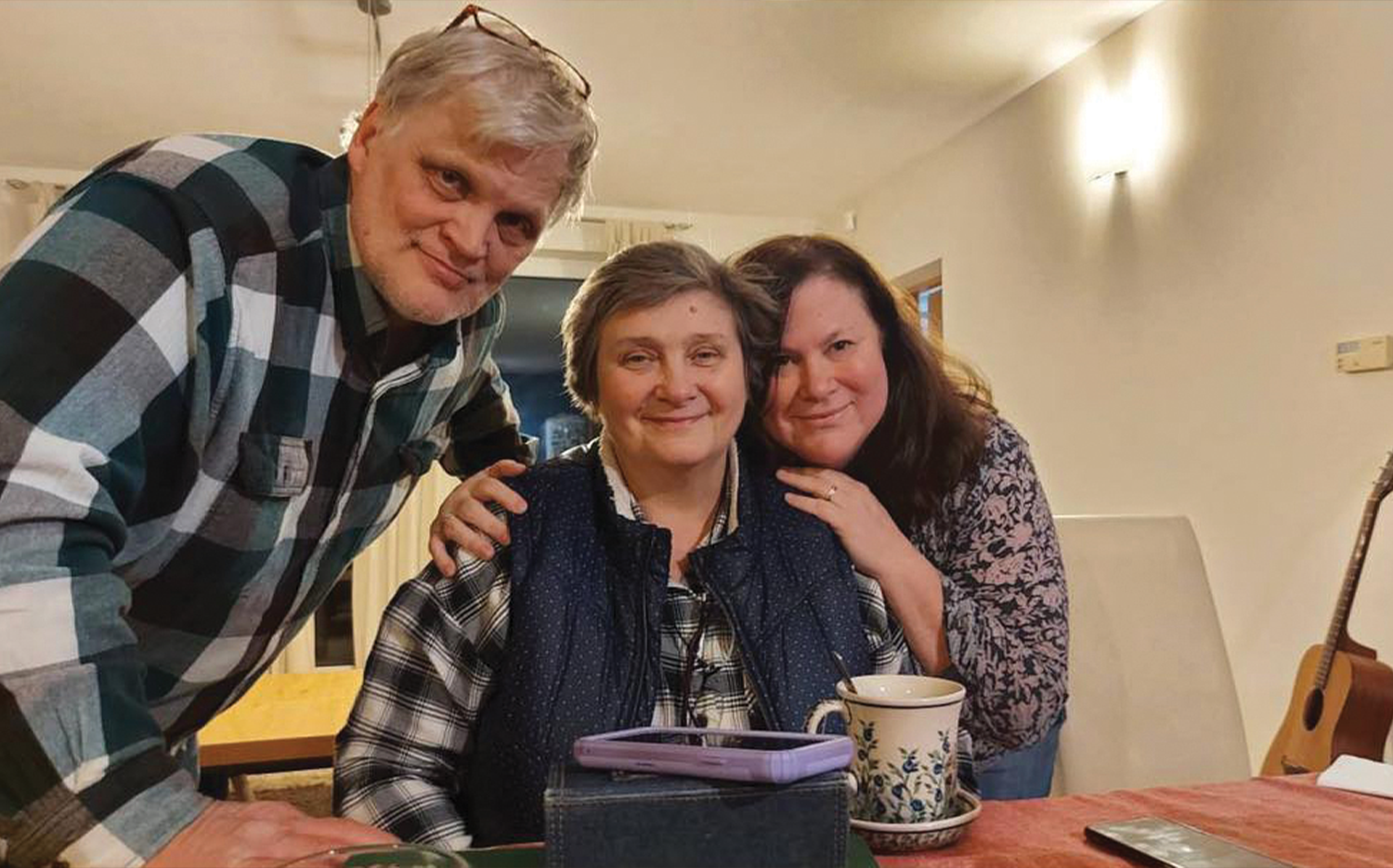 Three weeks into the war, Josiah Venture moved its hub for refugee processing from Poland into Ukraine. It’s a risky but necessary move, in order to transport people directly from the war zone to welcoming church communities in Western Europe. The goal is to have churches receive people from the same church community in Ukraine. “We don’t just want them to have a roof and a bed,” said English. “They also need a spiritual home.”

He admits it’s a challenge, but it’s also a big open spiritual door. “Those that aren’t Christians know very well that it’s Christians who are helping them.” The organization asks that receiving churches welcome 25-45 people and commit to care for them until the end of the war, though no one knows when that will be. He also asks hosting churches to bring refugees together twice a week to keep their community intact and fight isolation.

Most people fleeing Ukraine are senior citizens and mothers with young children. Men ages 18 to 60 are not allowed to leave Ukraine. Of the men who have stayed behind, many have joined the Ukrainian Territorial Defense Forces to fight. Many others have become the drivers getting women and children out and supplies in. 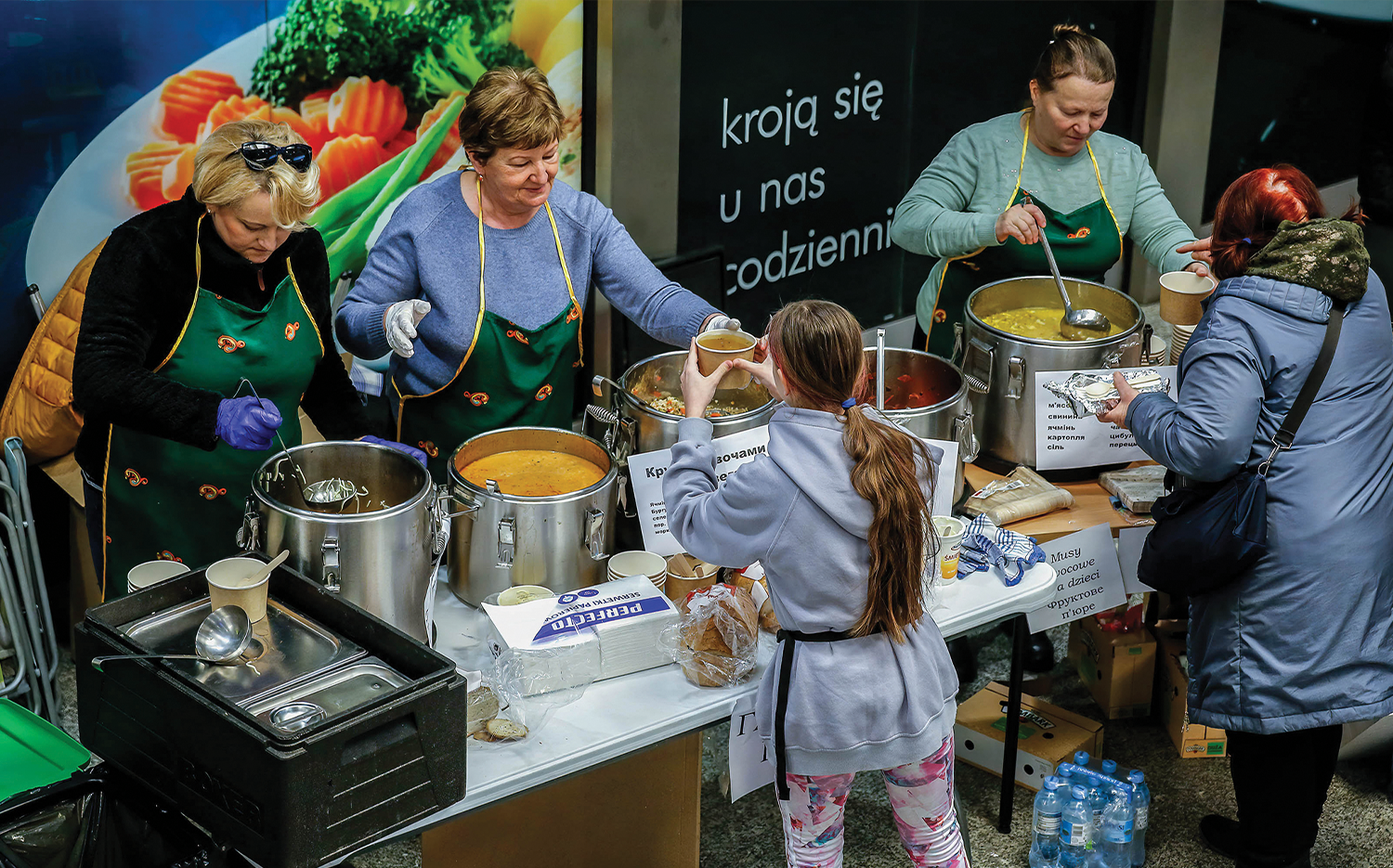 UKRAINIAN BAPTIST Theological Seminary in Lviv was already bracing for refugees in early February. In an interview the day before the invasion, seminary President Yaroslav Pyzh told me about preparations already underway: With money from an emergency fund set up by donors, the school had purchased five tons of fuel, first aid supplies, and food for six months. The plan was to feed and house former students and their families from eastern Ukraine and then move them along via the alumni network into western Ukraine and Poland.

The logic was that if there was an attack it would be in eastern Ukraine and Lviv would remain safe for refugees from that region to stay. Instead, UBTS has turned itself into a logistical hub for people coming to Lviv by car or train and leaving again by bus heading west. Originally prepared to host 80 people, UBTS has now housed more than 4,150 people and helped more than 3,000 relocate.

In video updates since the war began, Pyzh looks weary but determined: “I don’t know how long God will give us time to serve people. Every morning when I take a warm shower, I think that might be my last warm shower. But God did not call us for comfort. I think He called us to love people, so I’m thankful I have that opportunity. Would I accept it myself? Willingly and freely? Probably I would not seek it, but it came to me, so I’d better use it.”

After Russians bombed Lviv on March 18, UBTS made the difficult decision to evacuate their own women and children. 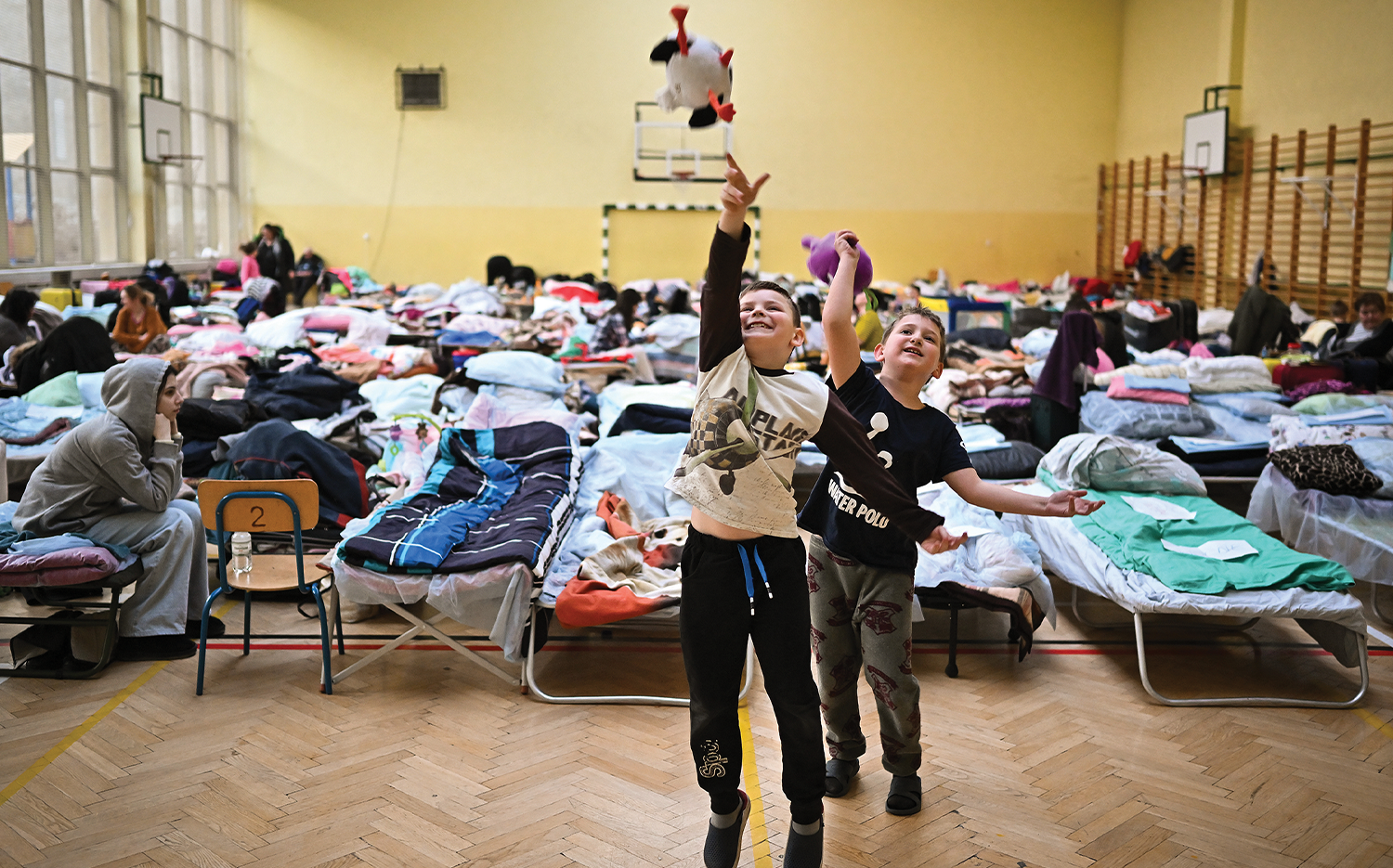 TERRY ENGLISH HAS BEEN hosting refugees at his own home in Ostrava, Czech Republic, since they started coming over the border. At first he and his wife worried that the experience would affect their two young kids adversely, but he’s seen the opposite as his children have grown in serving their guests. It’s not easy. The last group of people he hosted had spent days sheltering in an underground bunker. The first morning, he came downstairs to find all 10 refugees staring at him, eyes wide with fright. He had run down the stairs too quickly, and his footsteps startled them.

“I keep telling people,” said English, “‘the person you meet is not the person they are.’” He added: “The first two days are the most difficult.” Communication is also a challenge. Many Ukrainians don’t speak English or any other European languages. Many who speak some Russian—and even native Russian speakers—now avoid using it.

Back in Poland, even as she cooked for a houseful of guests, Carol Lynn Rucin was thinking about long-term effects on the country. “What effect will this have on our school situation in the fall? Will we need more Ukrainian-speaking teachers to step up? Will Polish as a second language become a thing? How can we provide trauma care?” She is proud of the way her adopted nation has received the overwhelming number of refugees, hundreds of thousands of them in private homes. 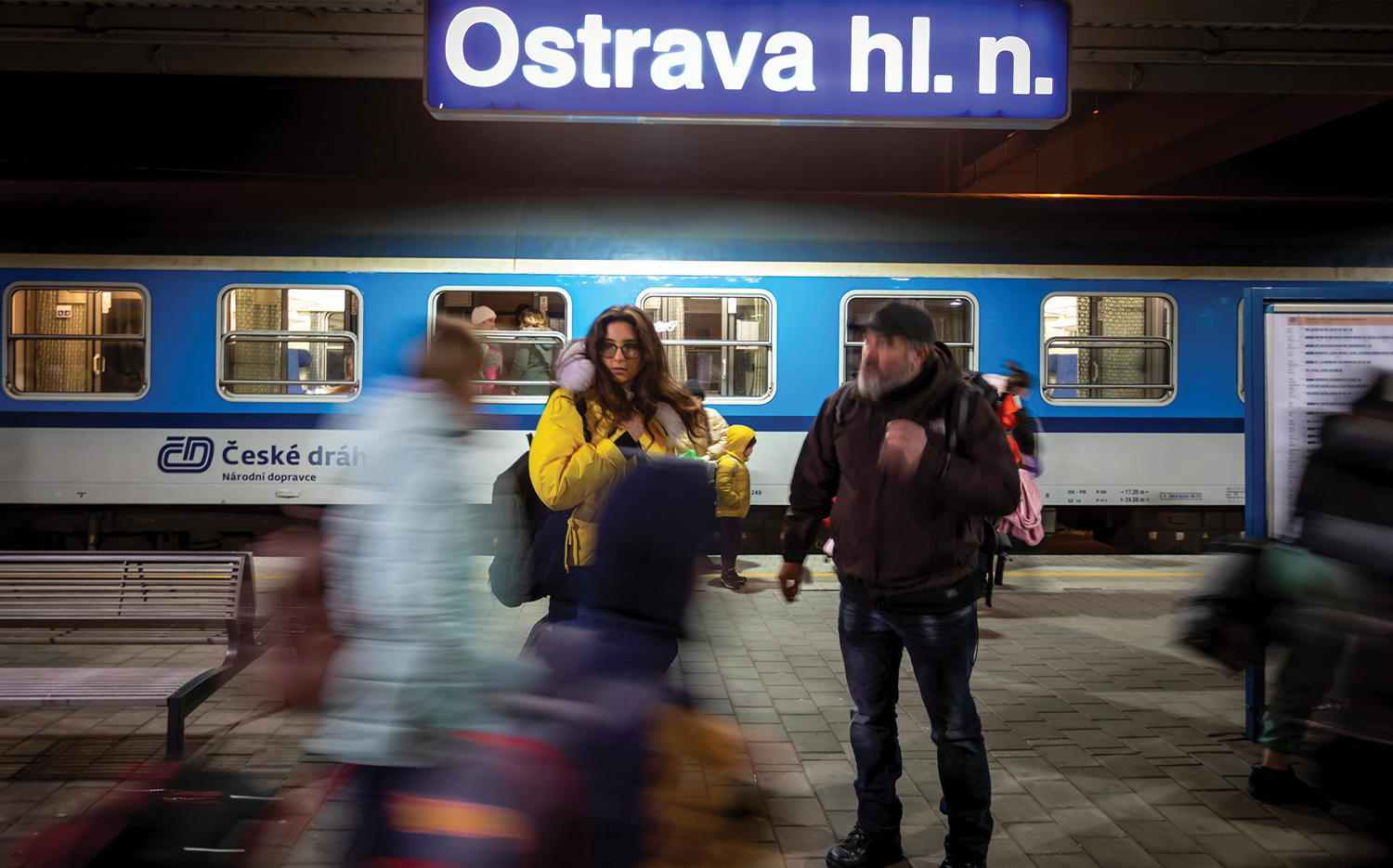 Another train arrives in Ostrava with people fleeing the war. Petr Sznapka/CTK via AP

A traditional Polish saying goes: “A guest in the house is God in the house.” Now Christians say the crisis is an opportunity to welcome people into God’s home. When the 2014 conflict began in the Donbas, many Ukrainians came to Poland. “One of the blessings was the believers who came to our churches,” says Carol Lynn. “A lot of them have Bible school training, more than we do. There were some intercultural communication difficulties at first, and it took humility on both sides, but I feel like Poland has been blessed by Ukrainian spiritually. As tragic as this is, I think we’re going to be blessed further by men and women who will find themselves here.”

In quiet moments she wonders if that’s part of what God is writing on this page of history. “This population is being blown apart like a diaspora,” she said. “But if you read church history and the history of missions, we see these stories in the narrative of God. Sometimes that’s how God moves the truth of His gospel to other nations. I don’t like it, I’m glad I don’t write it, but it is His narrative to write.”