An exodus from Africa

An African immigrant stands with a child in Brampton, Ontario. Photo by Samuel Wiredu Appiah

Global pandemic restrictions were just beginning early last year when Mimi Emmanuel left Lagos, Nigeria, for Ontario, Canada. Resettlement programs for new immigrants like her had suspended in-person sessions because of the pandemic.

But Emmanuel, in her 20s, navigated a new culture and embarked on a new life. She learned the bus system after missing her stop once and riding the entire route. Once while shopping at a store, a kid yelled, “She’s black.” Emmanuel stayed in one room at a family friend’s apartment and had already applied for and scheduled a job interview for three days after she arrived. She got the job the same day.

In Nigeria, Emmanuel had studied law and passed the country’s bar exam in 2015. She later completed her Master of Business Administration degree and worked at different law firms and on the legal team of a financial firm. But she said she lacked the “godfathers” and connections required to advance. So, she says the trade-offs of coming to work lower-wage jobs in Canada were worth it. She picked up another low-paying job and settled into her own apartment.

“For me, it was pretty straightforward. Even though they are minimum wage jobs, I still make a lot more than I made in Nigeria, and I’m able to afford my needs,” she said.

Canada has long served as a haven for Africans fleeing conflict and unrest at home. But Emmanuel is one of the growing number of young Nigerian economic migrants traveling more than 5,000 miles to restart their lives. In 2019, Nigeria accounted for 12,595 immigrant arrivals in Canada—the fourth-highest country and the highest from Africa. Canada’s Express Entry visa system especially appeals to young, skilled, and educated Nigerians seeking alternatives to their home country’s economic and security woes, many of them willing to trade career setbacks for a better future. The ongoing exodus has left Nigeria—Africa’s most populous country—grappling for remedies to the ongoing brain drain in a country already facing economic and societal instabilities.

Canada launched the Express Entry system in 2015 to encourage skilled workers to take jobs in less populated regions. The process uses a competitive ranking system that gives points to applicants based on their age, education level, work experience, language proficiency, and ties to the country. Those who make adequate scores then receive invitations to apply for permanent residency. Australia and Britain have adopted similar systems.

Emmanuel first heard about the system in 2017 when she reconnected with a high-school classmate who had already relocated to Canada: “You could see the clear difference, what he was able to achieve here given the environment and how it encourages you to thrive.” Meanwhile in Nigeria, “I had the work experience, I had the degrees, but it still wasn’t going to make the way for me.” 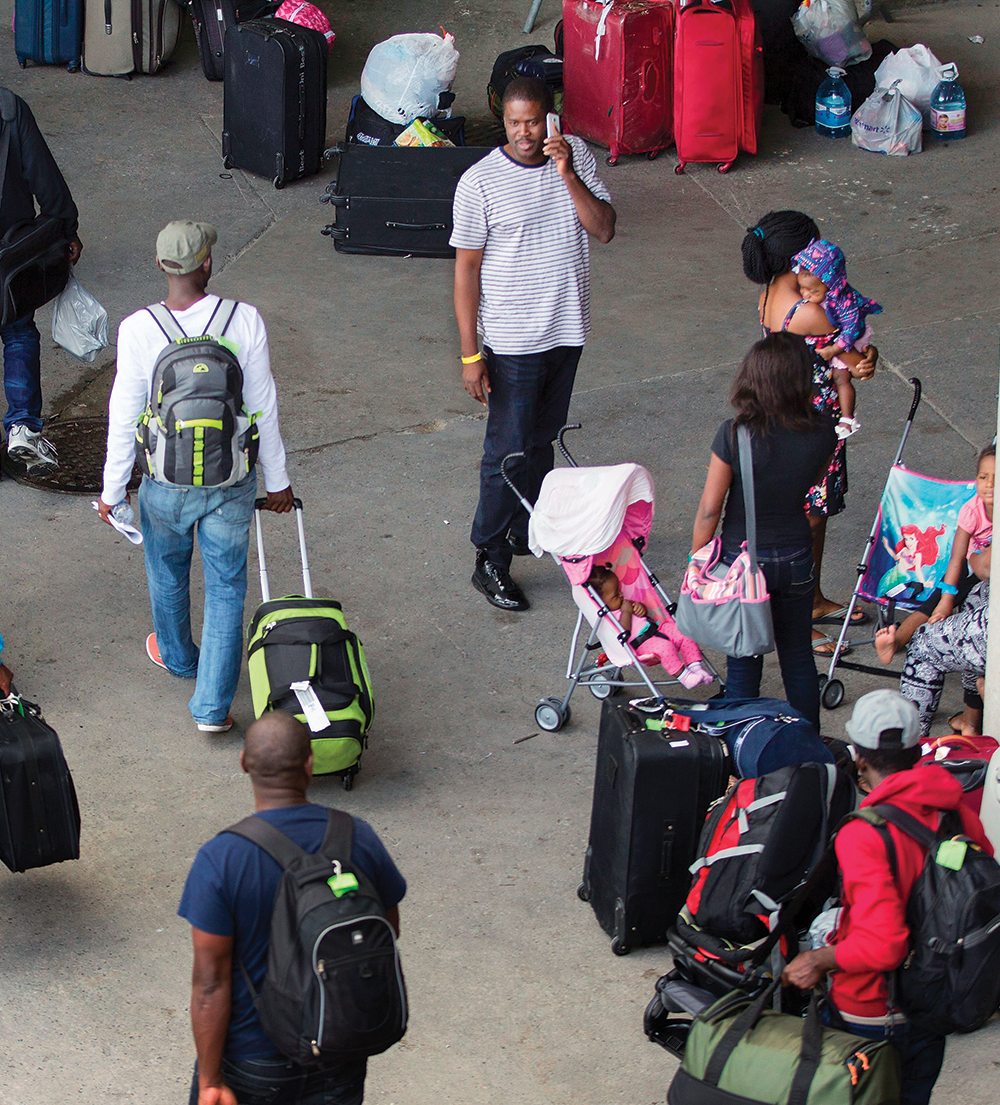 People in the departure wing of the Murtala Mohammed International Airport in Lagos, Nigeria, in March 2020. Temilade Adelaja/Reuters

NIGERIAN STUDENTS and skilled workers have been leaving for the United States and Europe as far back as the 1970s in search of better opportunities. By 2018, more than 375,000 Nigerians were residing in the United States, accounting for nearly 1 percent of the country’s foreign-born population.

Now, Nigeria’s economic and security instability is fueling another exit, with Canada as a prime destination. In a 2018 Pew Research Center study, 45 percent of Nigerians polled said they planned to move to another country within the next five years. They cited violence, jobs, education, and reuniting families as reasons for leaving.

Different regions of the country are battling Islamist insurgency, armed attacks, and kidnappings for ransom. In the fourth quarter of 2020, Nigeria’s National Bureau of Statistics recorded a 42.5 percent unemployment rate and 21 percent underemployment among young Nigerians ages 15-34.

Chinedu Amadi, a mechatronics engineer in Abuja who has already started working on his Canadian immigration application, pointed to Nigeria’s lack of investment into research and development in innovative sectors like artificial intelligence.

The country also lacks a reliable power grid, he added. Jonathan Phillips, director of the Energy Access Project at Duke University, told NPR in 2019 that Nigeria has one-fifth of the total power supply of North Carolina, although the country has 20 times the state’s population.

IT’S NO ACCIDENT that so many Nigerians are choosing Canada as a destination. The country offers more affordable tuition for foreign students and post-study opportunities for graduates. The number of Nigerian students attending Canadian institutions increased from 2,825 in 2009 to 11,985 in 2019.

Other Africans are also choosing Canada. Eritrea ranked as the second-highest African nation from which immigrants arrived in 2019, accounting for 7,025 new immigrants. Canada has also accepted thousands of Eritrean refugees from Israel and Sudan, where they initially sought refuge after running from persecution and a repressive government. More than 60,000 people in Canada reported Somali origins, according to the 2016 National Census. In 2017, Somali immigrant Ahmed Hussen, who fled war to Canada in 1993, began a two-year stint as Canada’s immigration minister.

In October, current Immigration Minister Marco Mendicino outlined Canada’s immigration plan for the next three years, which could welcome more than 1.2 million immigrants by 2023. In 2021 alone, Mendicino said the government would approve up to 401,000 permanent residents, including 232,500 economic migrants.

“Canadians understand that newcomers are playing an outsized role in stepping up to fill some of our most acute labor shortages and that growing our population is imperative if we want to leverage the advantages we have and keep Canada competitive on the world stage.”

If Canada’s goal is to look to foreign workers, other African countries may be prime targets too. The same Pew study that found 45 percent of Nigerians plan to leave in the next five years also found that 24 percent of Tunisians and 19 percent of Kenyans also plan to leave their countries in the same timespan. In 2018, Pew reported that more than 1 million sub-Saharan Africans had migrated to Europe in 2010, and nearly half a million had moved to the United States since then.

But migration to the United States has waned since. Emmanuel opted to move to Canada over the United States because of Canada’s more Africa-friendly policies. On Jan. 31, 2020, the United States added six new countries, including Nigeria, to a travel ban, barring pathways to permanent immigration. The Biden administration reversed the decision nearly a year later, but young Nigerians like Emmanuel still remain wary, pointing to ongoing conversations about policing in the United States: “I don’t want to end up being a target for anything. I just want to stay where I am and be safe.”

With eyes fixed on Canada, she took the standardized International English Language Testing System (IELTS) exam, completed the required medical tests and criminal background checks, and filled out the Express Entry application. Her family also pooled resources to provide the $12,960 proof of funds she needed to show she could support herself.

It took about six months to get word on her application. Emmanuel woke up to texts from friends also expecting an update, asking her to check her email. “I got it. I was too happy.” 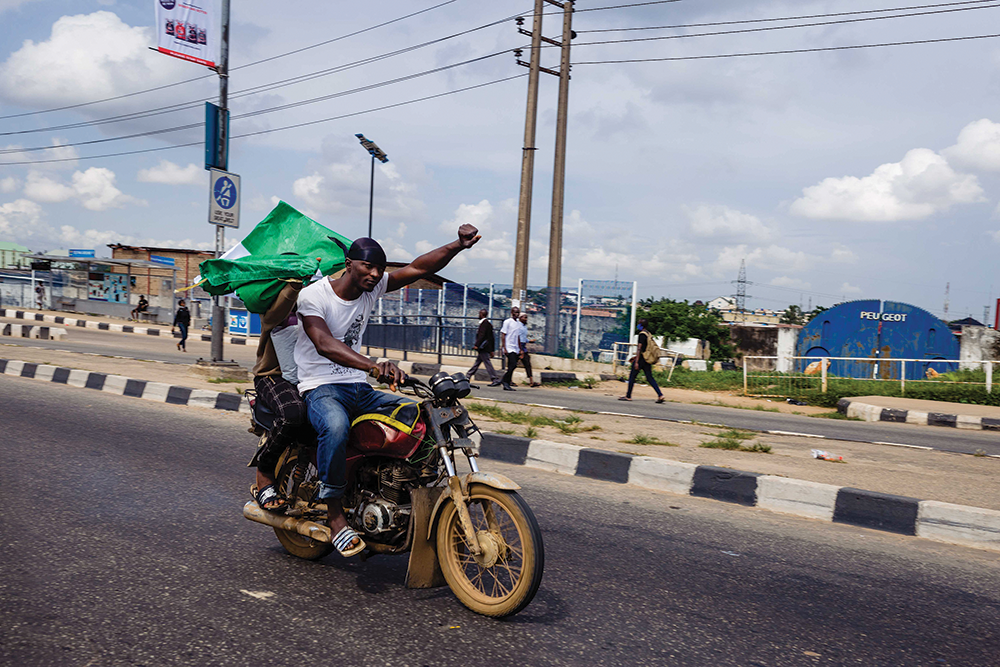 A man in Nigeria raises his fist in protest against oppression. Benson Ibeabuchi/AFP via Getty Images

OTHER NIGERIANS who relocated successfully to Canada have set up YouTube accounts to offer advice on the application process and on adjusting to life in Canada.

After moving from London (in the United Kingdom) to London (in southwestern Ontario), Osariemen Opaluwa started uploading her YouTube videos during the height of the coronavirus lockdowns. She had her first baby in December 2019 and was still on maternity leave when pandemic restrictions heightened in March 2020.

Without much to do, she binged on YouTube videos and discovered an audience for her immigration story among other Nigerians also seeking a way out. She now has more than 2,000 subscribers: “I started to capitalize on it and give out more information.”

Opaluwa said Canada was always a long-term plan for her and her husband. They zeroed in on it after her husband’s company in the United Kingdom declared bankruptcy, forcing them to return to Nigeria: “We just knew we were not ready to stay in a country and be illegal.”

Her husband got a job at the local Christian broadcasting network while she worked a sales role at a bank. When a family friend suggested they look into the Express Entry process, they decided to give it a try. Her husband’s IELTS score, master’s degree, and work experience in information technology were enough to get them in.

In September 2018, they received the email confirming their application was successful.

“I just got down on my knees and started worshipping,” Opaluwa said.

They arrived in Toronto two months later and stayed at an Airbnb while trying to decide where to settle. The Syrian businessman who owned the house offered advice on workplaces and best locations for immigrants, and they moved two hours away to London.

The couple settled into a routine but had a hard time finding a church that felt like home. They continued to watch services from their Nigerian church online until they found one in Hamilton, more than an hour’s drive away.

“I believe if we were planted in a church, at least we would have had friends or people who can reach out to let me know I’m not going through this alone, because I had a very terrible first trimester,” Opaluwa said.

Despite the difficulties and living far away from family and comfort food, Opaluwa views the process as worthwhile. “You can see my life is really a testimony,” she said, laughing. 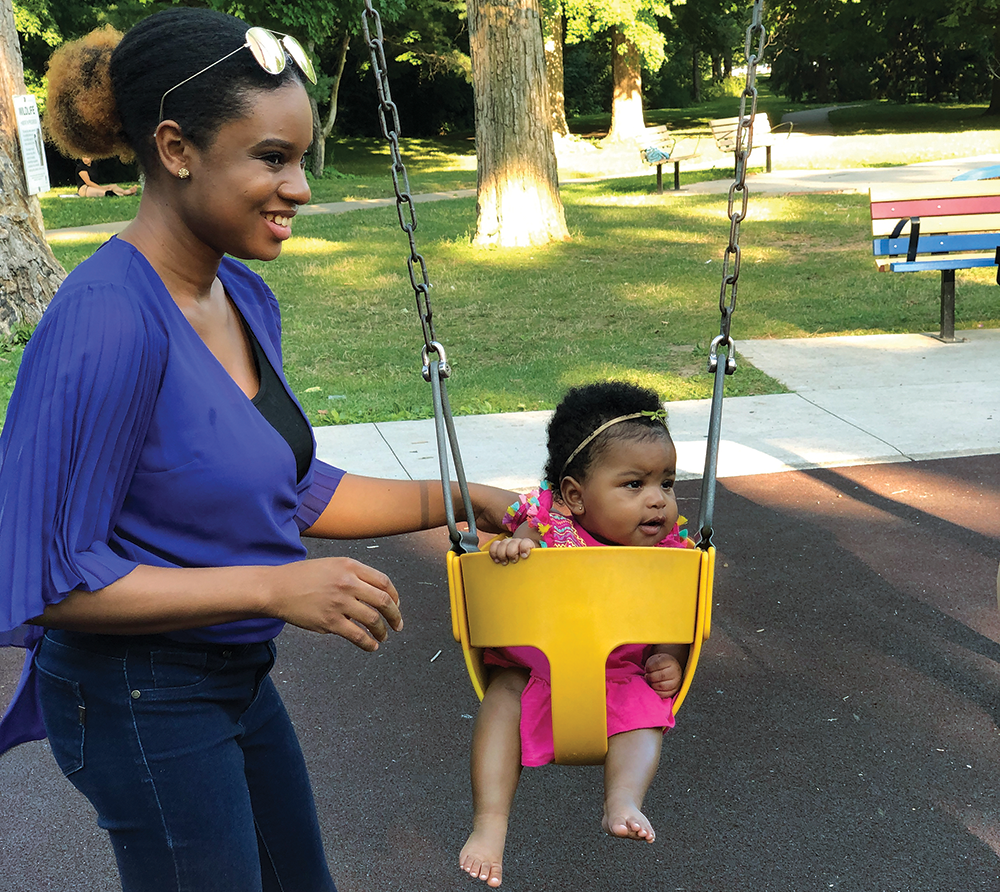 Osariemen Opaluwa plays with her daughter at the park. Handout

BACK IN NIGERIA, questions about Express Entry remain common conversation among young Nigerians. The exodus’s impact at home is also growing: The country of 200 million people only has about 74,000 registered doctors, according to the Medical and Dental Council of Nigeria.

A 2018 NOI Polls report said about 88 percent of Nigerian doctors said they were seeking opportunities abroad, citing low work satisfaction and poor salaries among the reasons. In October, Nigerian Health Minister Osagie Ehanire said the government would work to resolve the “brain drain” of physicians leaving to work in other countries.

Opaluwa still has family in Nigeria and acknowledged that not everyone can afford to relocate. She admitted Nigeria is benefiting from foreign remittances—Nigerians in other countries sending money back to family in Nigeria—with a growing population abroad.

In 2018, Nigeria received $23.63 billion in foreign remittances, making up 6.1 percent of the country’s gross domestic product. Financial analysts estimate the figure could rise by nearly $6 billion this year.

Despite the benefits, the migrant movement should serve as a wake-up call for Nigerian leaders to take more decisive steps in improving services at home, Opaluwa said.

“For those people [leaving], it’s the fact that there’s an assurance they have that, when they come to Canada, at least their children would enjoy the best education, their family is safe and secure,” she explained. “They’re taking the best of the best from our countries, and I think our leaders are still sleeping.”