In the Netherlands, legal prostitution hasn’t turned out the way advocates predicted, and some are fighting to end it

The streets were crowded on a recent Saturday night in Amsterdam’s red light district. Thousands of pedestrians strolled the cobbled streets under pink neon signs and over canals where trash floated on brown water. High-pitched laughter occasionally punctuated the excited murmur of sightseers and crescendos outside an X-rated cinema.

Bachelor parties of different nationalities—the groom-to-be identifiable by his ridiculous costume—walked alongside couples strolling arm-in-arm. Shop windows displayed all the paraphernalia imaginable in a city where marijuana and prostitution are legal. The other ware displayed in shop windows: young women trafficked here from poor countries of Eastern Europe and forced into sex work.

By all accounts, it’s just a normal Saturday evening in Amsterdam.

The Netherlands legalized prostitution in 2000, a move politicians said would help curb trafficking and offer safety to “sexual workers” by trying to normalize their employment and standardize conditions. The opposite happened. Freedom of movement within the European Union made it easier for traffickers to bring women from eastern countries like Romania and Bulgaria to rich western cities with liberal laws. It also made it harder to trace links between prostitution and organized crime. Amsterdam became a human trafficking destination.

But now some among the Dutch are fighting for the once unimaginable—the end of legalized prostitution—and they achieved enough signatures on a petition to force the Dutch parliament to debate the matter. One grassroots group, called Exxpose, wants the Netherlands to adopt what’s known as the Nordic model, where authorities prosecute customers and give help to prostitutes in leaving prostitution.

The day before I visited the red light district, Exxpose co-founder Natasja Bos met me in Utrecht, a 30-minute train ride east of Amsterdam. In the group’s headquarters—a barebones office space shared with video game programmers—the tall, dark-haired, 29-year-old Bos explained the Nordic model. Adopted by Sweden in 1999, this approach criminalizes buyers, decriminalizes prostitutes, offers help to get out of prostitution, and educates the public on the realities of prostitution and sex trafficking. 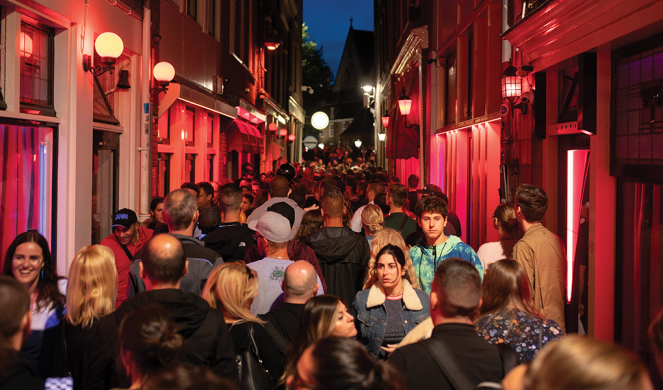 The model has been a success: Street prostitution in Sweden has dropped 50 percent, and communications intercepted between organized crime members indicate the country is “no longer a good place to do business.” Several European countries, as well as Israel, have since adopted the Nordic model.

The research behind Sweden’s approach resonated with what Bos and co-founder Sara Lous—both social workers—already knew from their experience counseling women leaving prostitution: Women exiting the profession exhibited the same symptoms as survivors of sexual abuse: disassociation, depression, and post-traumatic stress disorder. They also knew that contrary to the common Dutch view of women freely choosing sex work, those who “chose” prostitution almost all came from vulnerable backgrounds of trauma and abuse. In 2012 Bos and Lous saw an Al Jazeera documentary about Amsterdam’s role in modern-day slavery and had to speak up. They started a blog to expose truths about prostitution and human trafficking.

Bos and Lous, who call themselves abolitionists, are both Christians, but they say their organization is for anyone who wants to fight the injustice of trafficking. Their work led to a social media campaign last spring. “I Am Priceless” showed photos of young people asking, “What if she was your sister?” The campaign linked to a petition to end legalized prostitution. In the wake of #MeToo, the petition hit a social nerve and by early April had passed the 40,000 signature threshold required to introduce debate into the Dutch parliament. “In the Netherlands we’ve educated our citizens with a lot of propaganda about prostitution,” says Bos. “If it’s visible you can control it. If you criminalize it, it will go underground. It’s just a normal job—it’s the oldest job in the world. It’s really hard to change those belief systems, so we focus on young people who are more open to change.”

They also want to educate visitors to Amsterdam. One campaign involves giving tourists facsimiles of 50-Euro bills. On the reverse side is a list of possible options for how to spend them: rent two bicycles for the day, take a barge tour through the canals, buy a poor woman for sex. Bos says the point is to demonstrate that the purchase of other humans has no place in a modern city. 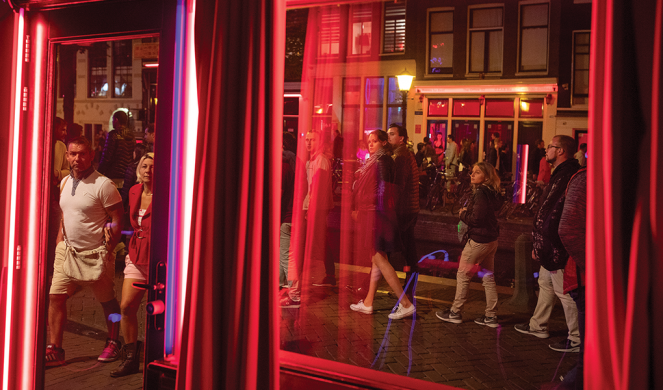 Dutch society values freedom and choice, but the growing global spotlight on human trafficking has raised questions about how much “freedom of choice” the women behind the windows actually have.

Ease of international travel and cheap airfares from London, Dublin, and Hamburg mean Amsterdam’s streets are often filled with drunken sex tourists coming to gawk and buy. That brings drug use, disorderly conduct, and crime. Femke Halsema, Amsterdam’s first female mayor, vowed to clean up the red light district and in January banned walking tours of the area, even while declaring her support for the sex industry. But Rouvoet says the city council has begun to see the limits of Dutch pragmatism, and he sees a definite shift in public opinion: “The council is asking, ‘Do we have to be proud of the fact that drunken guys from England, Scotland, and Germany come here to abuse poor women from Eastern Europe?’”

The city’s youngest council member, Don Ceder, 30, wants to close the windows completely. “Thousands of men judge women behind the windows every day: too fat, too short, too black, not tasty enough. Is that the feminism we strive for as a society?” Ceder, a member of the Christian Union Party, brought soup to prostitutes in the red light district as a teenage church volunteer. That’s when he saw the dichotomy between the image the women projected and their reality.

“Amsterdam is the end station of a very evil chain, one of the best-known sex destinations in the world,” he said. He says that even the most conservative estimates of trafficking (10 percent of 5,000 prostitutes forced into the work) still mean 500 women are regularly raped. “I choose the side of the most vulnerable women,” he said. 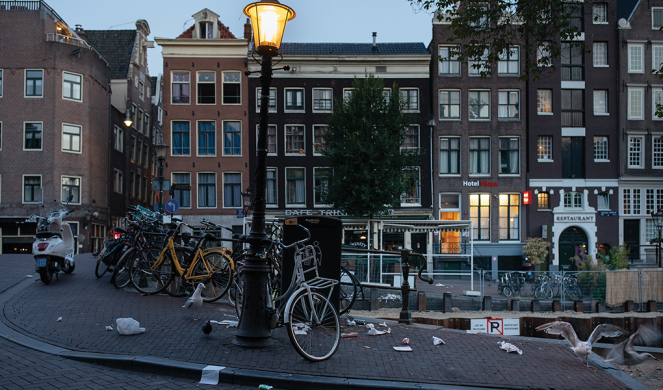 Rouvoet has seen firsthand the importance of having systems to help women out of prostitution. “The women tell me, ‘Yes, we need social workers and accountants to help us with taxes, and so on, but what we really need is relationships.’”

“Maria” is a Romanian woman who was first brought to Western Europe and trafficked by her mother at age 14. (WORLD isn’t using her real name for safety reasons.) Soon after they met, Rouvoet invited her to a weekend personality assessment training. Afterward Maria told him, “You are the first person who invested in my life. No one ever did this for me.” That training started her on the road to changing her life: Through support from Bright Fame she received training and now works as a hairdresser. “For the first time I have normal people in my life. I don’t want to do prostitution anymore.”

Bos encouraged me to go to the red light district. “If you can, take a walk through. It’s important to go see the truth, so you can’t ignore it.” It was a short disturbing walk, through narrow alleys where police officers directed unruly tourists into orderly traffic patterns. I prayed as I walked, and forced myself to look at women being sold in shop windows, in a “civilized” country, while hundreds of people strolled by. My eyes met those of a young woman, hair and makeup done to make her resemble a life-size doll. Our gaze met for a split second that haunts me.

At the end of that lane, the alleyway opened onto a canal across which stands the Oude Kerk—the Old Church—Amsterdam’s oldest building, built in 1306. Bos explained it was congregants of this church who first decided to tolerate prostitution nearby, creating Amsterdam’s medieval red light district. Their argument was that without prostitutes, visiting sailors would rape their daughters. When asked if Dutch churches today support the work of Exxpose, she shrugs and says the same mindset remains today, even among Christians. Rouvoet says simply, “The logic is wrong. Why are we OK with protecting one person’s daughter and not someone else’s daughter?”

Exxpose formally submitted its petition to parliament at the end of the spring, and committee meetings took place in the fall. Bos and Lous are awaiting the results of those hearings. Meanwhile, the minister of justice and some members of parliament have shown support, and there is a growing sense in the Netherlands that something has to change. The debate over what is legal and “normal” is far from over.

According to Taina Bien-Aimé, executive director of the Coalition Against the Trafficking in Women, internationally there are three legal approaches to the problem of prostitution:

Full criminalization. This is the approach in the United States, with the exception of a few counties in Nevada. It fails to recognize the vulnerabilities of the prostituted persons and punishes them for their exploitation. In this model, women are arrested disproportionately while buyers are less often apprehended.

Legalization or decriminalization. This approach is practiced in Germany, the Netherlands, and Switzerland. Bien-Aimé calls it “an unmitigated disaster in every country where these laws have passed.” Local authorities see a rise in organized crime activity and trafficking of undocumented workers. Legal brothels propose “menus” of degrading acts, some amounting to torture.

Nordic or Swedish model. Only buyers and pimps are prosecuted. Prostitutes are offered help out of prostitution. This model is based on the premise of prostitution as a form of gender-based violence and that sex buyers are the linchpin of the lucrative trade. Without buyers the industry would collapse and traffickers would lose markets for their victims. In Sweden this model has also brought about an important cultural shift: The vast majority of the population now believes purchasing sex is unacceptable and a barrier to equal gender rights. —J.L.S.