An Army of sights and sounds

“Ghost Army” soldiers were the master illusionists of World War II, and their secrets are finally being told

A half-track outfitted with playback equipment and a 500-pound speaker with a range of 15 miles, used by the Ghost Army for sonic deception Ghost Army Legacy Project

Two weeks after the D-Day invasion, newsreel cameras filmed a gathering of Allied military titans: George C. Marshall, Dwight D. Eisenhower, George S. Patton, Omar N. Bradley, and Bernard L. Montgomery. Standing behind Patton, even at the age of 18, George Dramis knew he was witnessing history in the making and hoped his picture would make it in the news.

Little did he know he would make his own mark on history as a member of a top-secret, specially selected group of soldiers known today simply as the “Ghost Army.”

Known formally as the 23rd Headquarters Special Troops, the 1,100-man unit deployed full-scale theatrical illusions. Using inflatable tanks, trucks, and airplanes; sound effects; and scripted radio communications, it had one mission: deceive the Germans by impersonating combat units of 13,000 to 17,000 men and, in one case, 30,000 men. Whether ingenious or insane, the top military brass considered it worth the gamble, and their gamble paid off. Historians say the Ghost Army’s efforts saved tens of thousands of lives during World War II. With the men of the 23rd posing as other groups, such as the 70th or the 39th divisions, the real divisions could move stealthily to a different position and surprise the enemy. 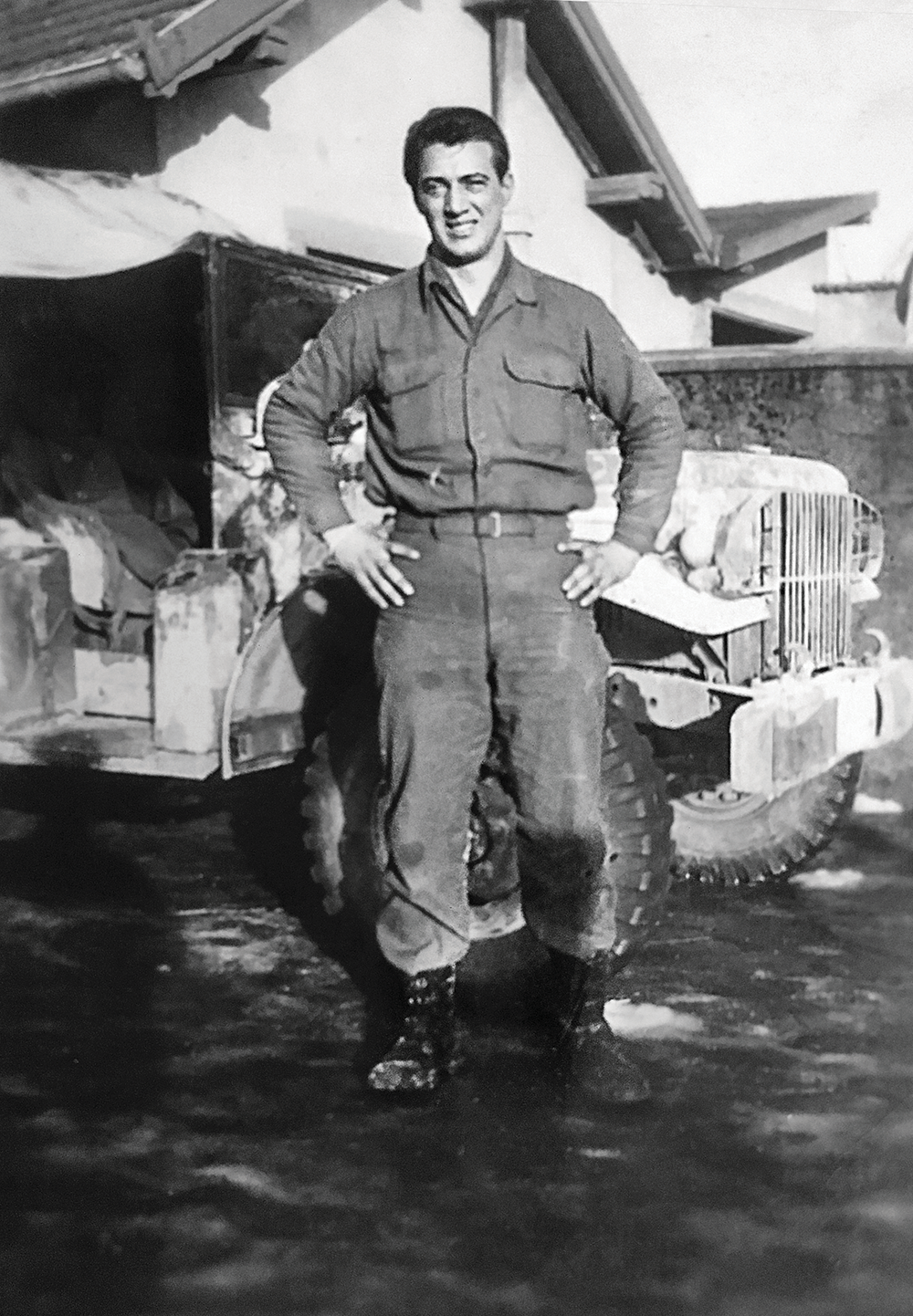 George Dramis stands in front of a radio truck. Handout

Drawing from historical records and in-person interviews, author, filmmaker, and historian Rick Beyer chronicles the work of the 23rd in his 2013 PBS documentary, The Ghost Army. Beyer collaborated with Elizabeth Sayles two years later to release the book, The Ghost Army of World War II: How One Top-Secret Unit Deceived the Enemy With Inflatable Tanks, Sound Effects, and Other Audacious Fakery.

Four different groups comprised the 23rd: the 603rd Engineer Camouflage Battalion, the 3132 Signal Service Company, the Signal Company Special, and the 406th Combat Engineer Company —each tasked with a specific role in the Army’s traveling roadshow.

The 603rd, the largest unit with 379 men known as “camoufleurs,” executed the visual trickery. They had thousands of inflatable tanks, trucks, artillery, jeeps, and even aircraft used to fool German troops surveilling from the air or on the ground. Made of rubber, these inflatable decoys were manufactured by American companies such as U.S. Rubber and Cooper Tire & Rubber. Beyer spoke with one woman, Theresa Blais (née Ricard), who made 49 cents an hour as a teenager manufacturing rubber tanks. To maintain the confidentiality of the mission, she was told the inflatables were for the Army’s target practice.

Along with imitating the arsenal of the real troops, members also impersonated their personnel. The 603rd duplicated the patches or insignia of other divisions for the entire Ghost Army to wear. 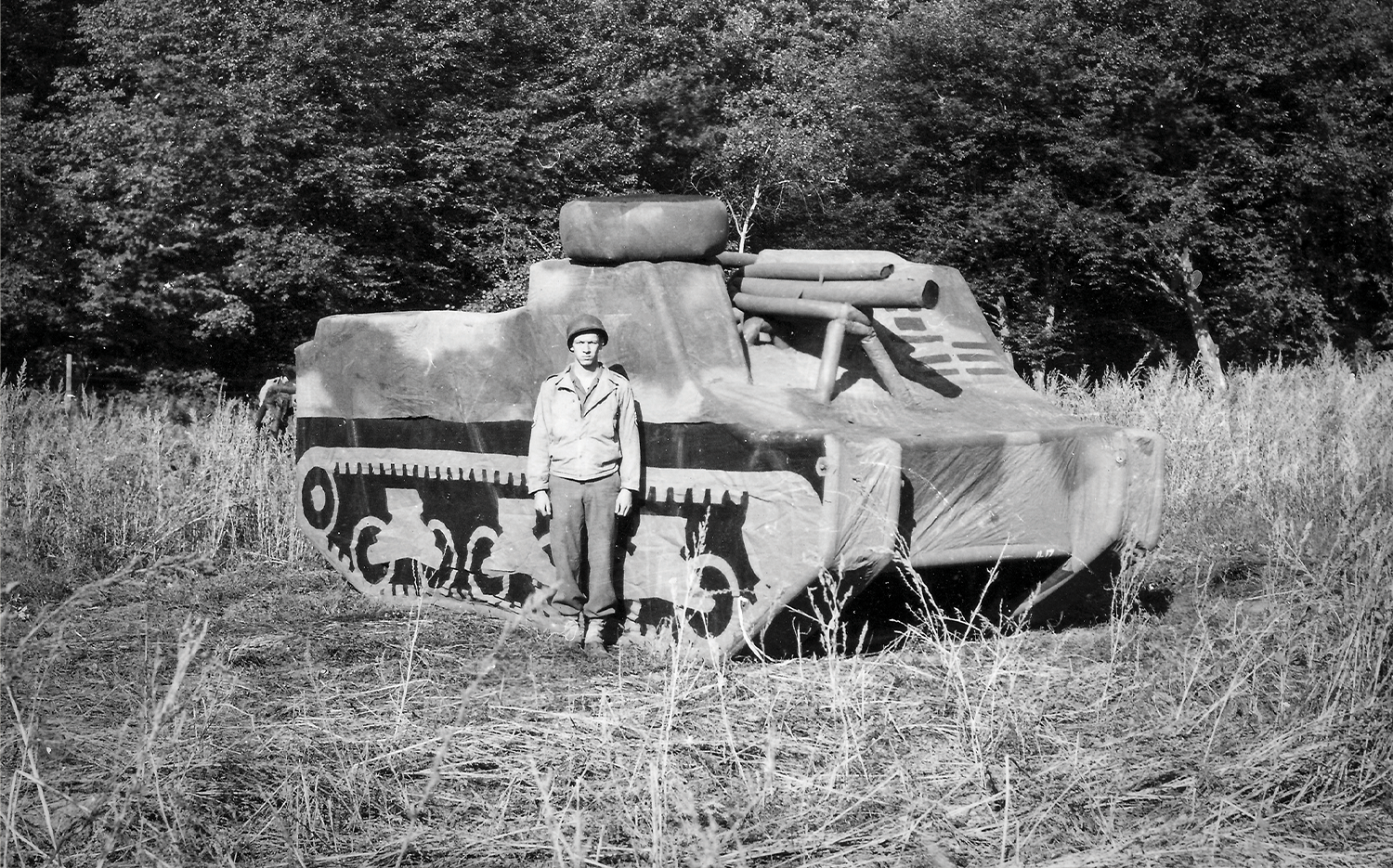 A soldier of the 23rd Headquarters Special Troops is pictured before an inflatable M7 Priest self-propelled gun on Sept. 14, 1944, in France. Ghost Army Legacy Project

Because of the top-secret nature of their work, the men of the 23rd never had their own patches or insignia. They would go into the villages of France with the goal of deceiving enemy spies into thinking a specific infantry or some other unit had come to town, while the real combat troops deployed elsewhere. Majors posed as generals, talking up fake plans and movements for the benefit of lurking enemy spies or German sympathizers.

The 3132 Signal Service Company worked on the sound effects. With massive 500-pound speakers that could pro­ject 15 miles, they simulated the sounds of vehicles moving and operating at night. Beyer’s book describes how Bell Laboratories experts worked with Army technicians to record the sounds of tanks, trucks, bulldozers, and “even the assembly of pontoon bridges”—right down to noises of hammering and men swearing. Factoring in the effects of weather, distance, and terrain when broadcasting the sounds, no detail was spared.

The Signal Company Special carried out the radio deception. In Beyer’s documentary former Sgt. Spike Berry, a radio unit veteran, describes the radio guys as providing the stage on which the camouflage and sounds groups performed. WORLD spoke with Dramis, also a member of the Signal Company. He recounted his role in the “fakery.” After enlisting in 1942, he took a test that required him to distinguish the difference between hearing a dot versus a dash. Passing the test handily, he was eventually sent to train in Morse code. Dramis explains that each operator has a certain “fist”—an inherent and unique way one sends messages. Some fists are naturally choppy, others are smooth and rhythmic. 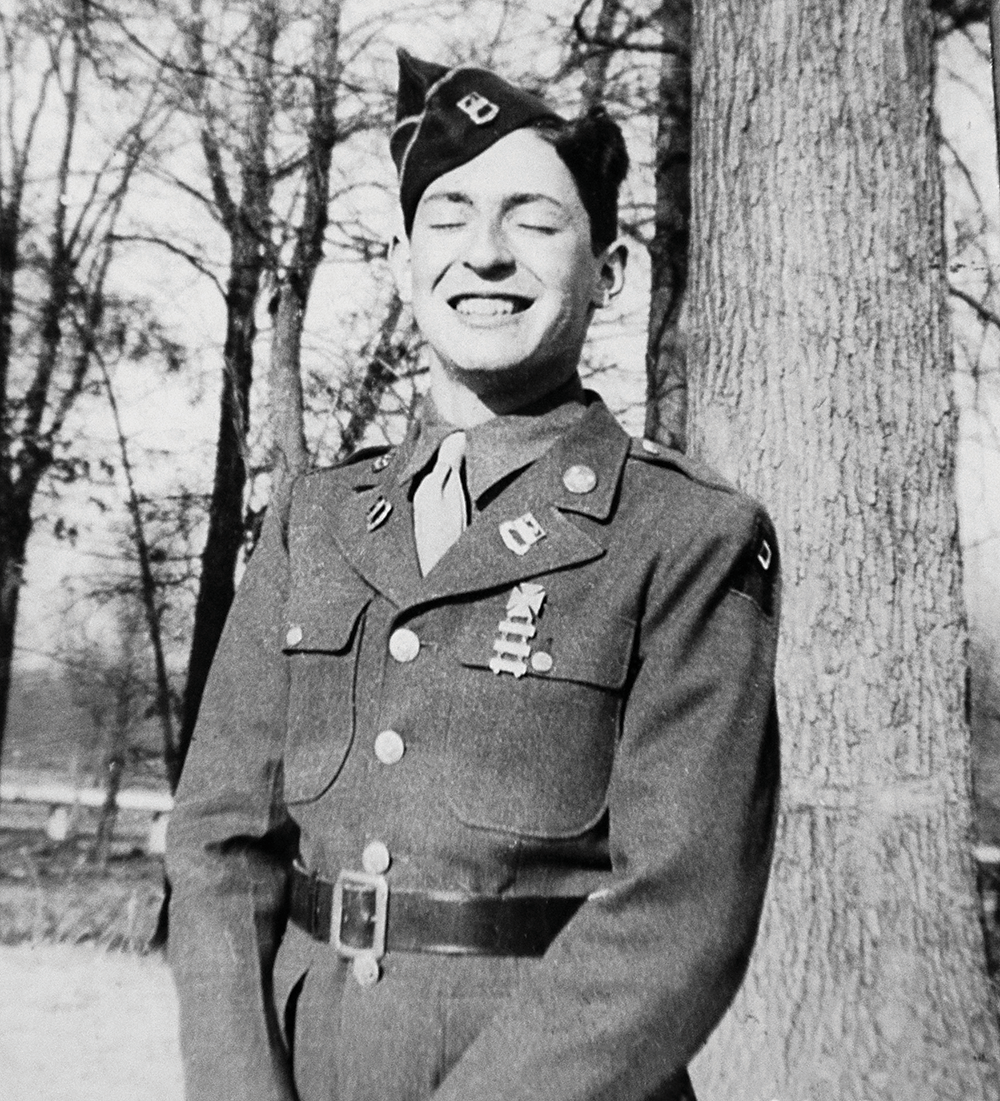 To successfully carry out the deception, every aspect of imitating other Army divisions had to be complete, even down to the frequency of messages sent between the American units and signature styles of specific Army radio operators whom German intelligence monitored and supposedly recognized. Dramis studied the idiosyncrasies of the fists he had to imitate and worked to send his messages the same way.

He and other radio men were provided scripted messages to transmit back and forth with the expectation the enemy would intercept them. Similar to the Ghost Army’s replacement of tanks on the battlefield, the Signal Company Special took over the airwaves, mimicking the combat troops’ communications.

The final group rounding out the 23rd consisted of the 168 combat-trained soldiers of the 406th Combat Engineer Company. According to Beyer, they acted as security for the other companies and performed construction and demolition work. They also contributed to the deception work by using bulldozers to create tank tracks.

Seymour Nussenbaum, who served in the 603rd Camouflage unit, is 98 but can easily recall his World War II service today. He was attending the famed Pratt Institute, studying art and taking a course in camouflage. During the course, the instructor provided the students with information about whom to contact when and if they went into the service.

Unbeknown to Nussenbaum, the contact information was for the camouflage unit of the Ghost Army. He had intended to enlist after completing his coursework, but Uncle Sam’s call interrupted his studies, and he was drafted initially into a different unit. Using the address given by his instructor, he requested a transfer to the 603rd Camouflage Battalion. Camouflage training and units existed throughout the Army, but only the 603rd participated in the deception unit. 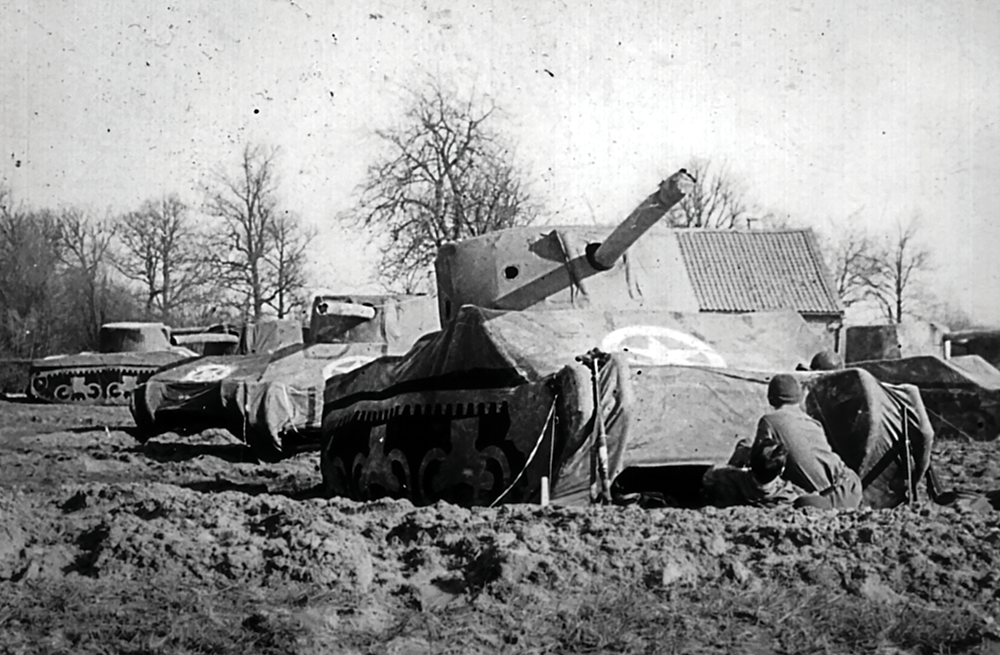 Nussenbaum arrived in France in the summer of 1944, a few weeks after D-Day. Assigned to “the factory” section, he worked in a group manufacturing fake badges and insignias of the units they received orders to impersonate. While the real badges were embroidered on canvas, “the factory” used paint, assuming no one would get close enough to tell the difference. Since Army trucks also carried identifying marks such as specific numbers or slogans, camoufleurs replicated those as well on other vehicles to fake out the enemy.

“We were practically on the front lines many times.” Nussenbaum said. When Army headquarters wanted to relocate a unit stationed on the front line, under the cover of night, the men of the 23rd would place “dummy” tanks exactly where the real tanks had been. By daybreak, German reconnaissance planes or ground spies would assume the unit had not moved.

Under the cover of the 23rd’s mimicry, U.S. fighting divisions executed surprise attacks on an unsuspecting enemy miles away from the division’s prior location. Dramis saw it work time and time again. However, he mused, “if the Germans ever found out we were just a small group, they could have overrun us in seconds.” Ghost Army veteran Gilbert Seltzer told Beyer, “We came to the conclusion that this was a suicide outfit.” Before he died in 2021, Seltzer was the oldest surviving member at 106. 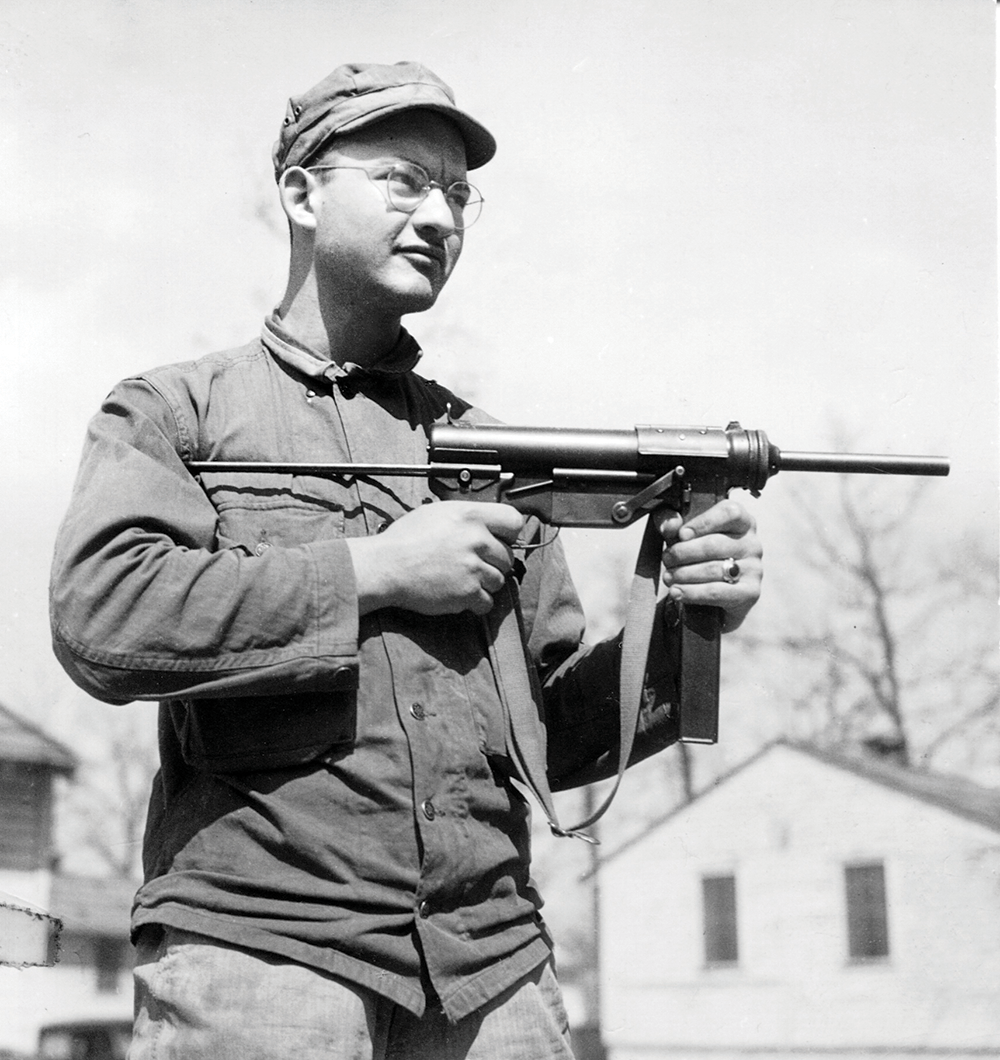 Ghost Army theatrics even fooled other American troops not privy to the existence of the unit due to its top-secret work. One unfortunate example of miscommunication led to dire consequences in August 1944. Gen. Troy Middleton had ordered an attack on the Germans. A company of light tanks moved in assuming they would be supported by the 6th Armored Division when it was in fact the 23rd’s illusionists. In Beyer’s book, Cpl. John Jarvie recalls the American tanks never “reached the line of departure. … They just got decimated.”

Despite that disastrous outcome, the group conducted its mission in more than 21 separate operations. The Ghost Army’s curtain-closing and most critical performance came in March 1945—on the eve of the Rhine crossing. By breaching the German line at the Rhine River, the western border of Germany’s industrial complex, the Allies could gain a pivotal foothold in the Western Front.

With its full complement of men, the 23rd successfully duped the Germans into believing its 1,100-man troop represented 30,000 men from the U.S. 9th Army. Bringing all its resources to bear, it successfully imitated the sights, sounds, and communications of the 9th Army’s divisions 10 miles from their actual location. It set up a fake vehicle depot and airstrip, brought in real tanks and artillery alongside their inflatables, and broadcast phony plans and locations over radio traffic. 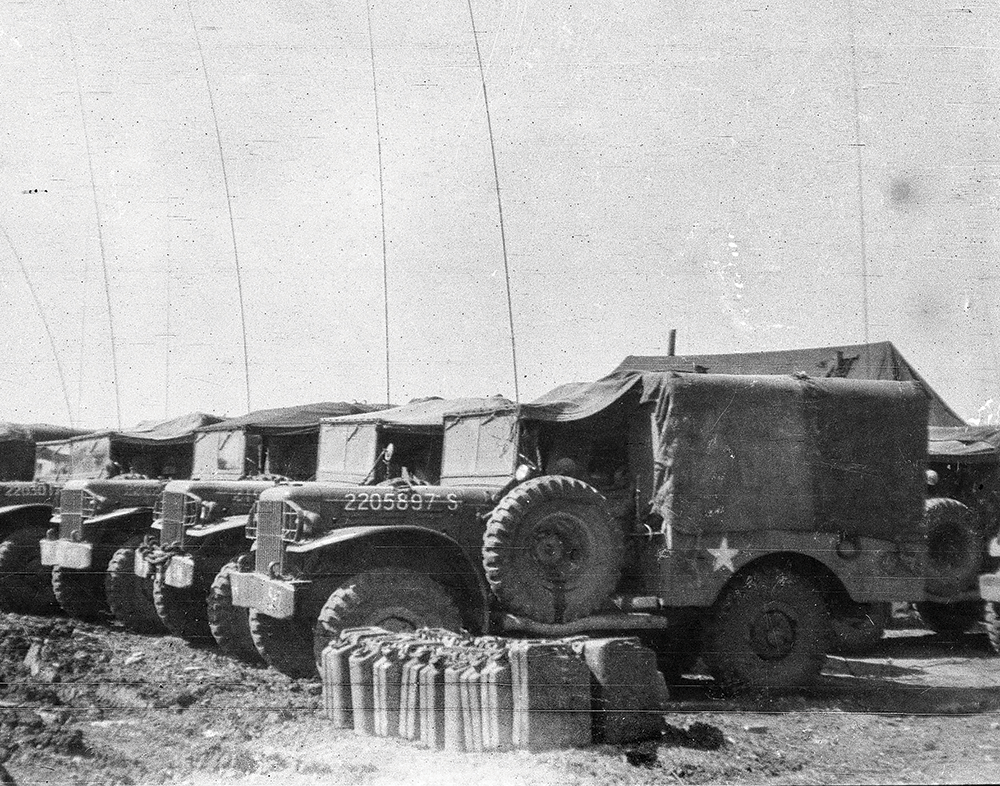 When the Allied troops finally did cross, they met light resistance. This final mission, tagged Operation Viersen, garnered the Ghost Army a letter of commendation from the commander of the 9th Army, Gen. William Simpson. “The careful planning, minute attention to detail, and diligent execution of the tasks to be accomplished by the personnel of the organization reflect great credit to this unit,” Simpson wrote.

The men of the 23rd would wait 77 years before receiving any other formal expression of appreciation from the government for their service.

While a handful of articles have appeared over the years chronicling some firsthand accounts of the Ghost Army, it took the Army’s declassification of records in 1996 for history to fully recognize the 23rd’s contribution to victory in the war. Recognition for the men has come largely through the efforts of Beyer and the descendants of Ghost Army veterans. After learning of the Ghost Army through Martha Gavin, John Jarvie’s niece, Beyer set out on a path to educate and inform others of the escapades of this unicorn unit. In addition to producing a documentary and writing a book, he founded the Ghost Army Legacy Project. Under his leadership, the Legacy Project lobbied for seven years for the Ghost Army to receive a Congressional Gold Medal. On Feb. 1, 2022, President Biden signed the act awarding a Congressional Gold Medal to all the members of the Ghost Army. 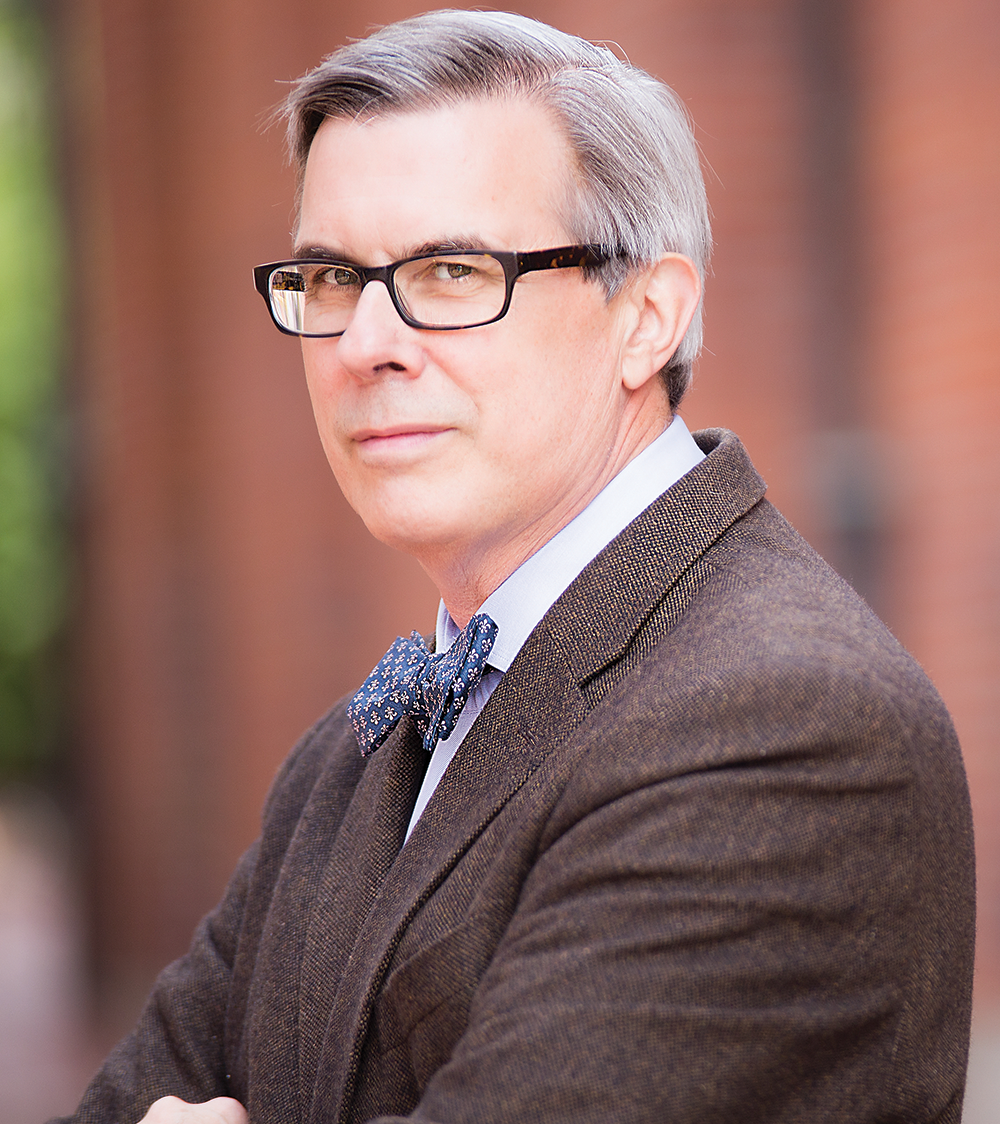 WORLD asked Beyer what common thread he saw among the 23rd’s veterans. He shared the pleasure they expressed in the story finally coming out and finding out their war efforts had meaning. They regularly asked him, “Rick, do you think we really did something, did we really accomplish something?”

“You had no idea at the time whether or not what you were doing was successful,” Dramis said. “You would just take orders.” Nussenbaum added: “They didn’t make a big fuss about it then. We were just discharged.”

He was instructed not to discuss his mission even with his wife. The Army labeled it “top secret” for the next 50 years, hoping to potentially use similar tactics should future conflicts arise.