An adaptation of the Gospels worth watching

The Chosen is smart and entertaining

A scene from The Chosen. Handout/VidAngel Studios

If The Chosen is anything to go by, writer/director Dallas Jenkins seems to have inherited the ability of his father, novelist Jerry B. Jenkins, to hook an audience. I’ve seen dozens of Biblical adaptations over the years, and I can count on one hand the number of times I felt I could give one an unqualified recommendation—not just for its spiritual value, but its entertainment value as well.

An indie production that owes its existence to crowdfunding, The Chosen impresses on both counts.

It’s important to note the long-form series isn’t a straight retelling of the Gospels, like Mark Burnett and Roma Downey’s miniseries. It takes creative license by asking intelligent questions then imagining stories that might answer them.

For example, what might cause a hot-tempered, blue-collar guy like Peter to go fishing at night? He needs to pay off a debt, perhaps. Why is Matthew willing to become a pariah in his community for the sake of a few denarii? Maybe he has an Asperger’s-like disorder that makes social connections difficult but mathematical calculations easy.

It’s a fascinating interpretation that dovetails perfectly with what we do know of Matthew’s meticulous nature.

Pastors and Bible teachers frequently remind us that most of the disciples were rough tradesmen. Yet whenever we see a movie or television show about them, they walk through their scenes full of wide-eyed, almost adolescent naiveté. They certainly never seem like the kind of guys to start a bar fight or make crude jokes after a hard day of manual labor. While keeping the language clean, The Chosen nonetheless gives us the apostles we’ve heard about but rarely seen.

For that matter, it gives us a Jesus we’ve heard about but rarely seen: Rather than the bland, distant mystic, here we have a loving, earthy savior who delights in the company of His followers.

It’s a dicey prospect: inventing backstories and side plots for Bible characters without undermining the source material. That Jenkins and his team navigate these hazardous waters without wrecking their ship on the rocks of contradiction, as so many big studio and network productions have, is thanks to a deep theological understanding of the New Testament. The series doesn’t just check off events as they occur chronologically. It uses creative camera shots, flashbacks, and quick references to the Old Testament to make a holistic case for Jesus as the Messiah. 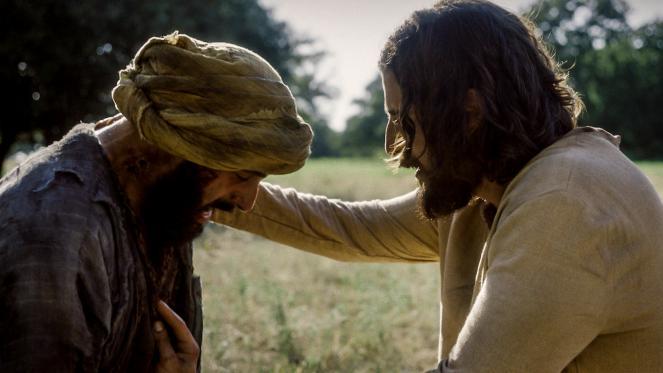 A scene from <em>The Chosen</em>. Handout

None of this is to suggest the show is perfect. Sets and costumes occasionally show evidence of budget constraints. A few of the actors overplay their roles (though it’s near miraculous how good the cast of mostly unknowns are overall). And every once in a while, the script invents dialogue for Jesus that isn’t as careful as it should be. The moment he asks Nicodemus what his heart is telling him is probably the worst offender. Jesus knew better than anyone how deceitful our hearts are, so it’s unlikely he would have asked the Pharisee what he believed in those words.

But this feels more like rare carelessness than intentional mischaracterization, especially since the rest of the scene is so earnest in capturing the spirit of John, Chapter 3. It would take a Pharisaical spirit indeed to impugn the whole over a minor quibble.

The Chosen’s pilot made a fair bit of news a couple of years ago when Jenkins first released it. If you’ve already viewed that, I’d recommend you watch further. While that episode is by no means bad, it’s the weakest of the series, which gets stronger as it goes.

Put simply, The Chosen is one of the most engaging Bible-inspired productions I’ve seen. Surprisingly funny and relatable, we continue watching episode after episode not because we feel obligated to support it as a dutiful Christians, but because it’s compelling and hard to stop.

VidAngel has made The Chosen free for viewing on its streaming platform throughout April, or you can watch it through a free dedicated app on iPhone or Android, as I did. Jenkins does pop up now and then to appeal for contributions to film more episodes. To that I’ll only say that when I was done viewing, I donated, eager to see what he and his team do with season 2.