The wealthy denizens of the Upper West Side tend to give to causes like the Met Opera, whose gala at the Lincoln Center draws locals in tuxedos and long metallic dresses. Gerson intentionally avoided that world, instead giving to Christian hospitals flooded with HIV/AIDS patients back in what Dr. Jon Fielder calls the “dark days,” before the U.S. government invested in HIV programs.

“He’s never asked for his name on anything,” said Fielder, a lifelong Christian medical missionary in Africa.

Fielder, 44, worked in Kijabe back in 2002, when AIDS patients were dying in front of him. Christian mission hospitals, often in remote places where few other groups were willing to go, provided the little infrastructure that many African countries had to fight the HIV scourge.

The Kijabe HIV clinic where the Gersons were top donors became an early model for a faith-based approach to fighting HIV/AIDS. Gerson has no qualms with the “Christian” part of Christian mission hospitals: He understands it’s part of why patients seek out Kijabe (aligned with African Inland Church) over a government hospital. 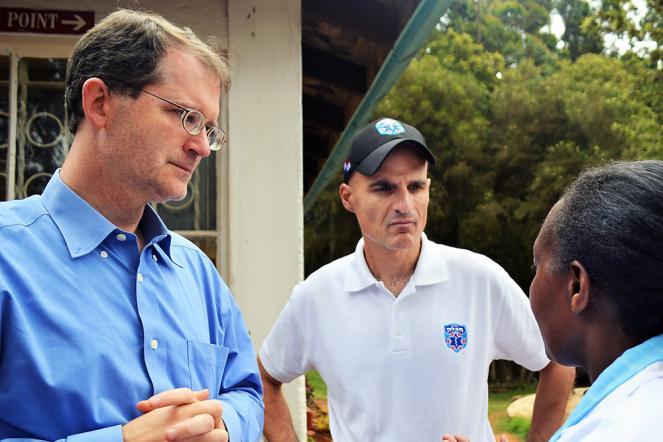 In September, Gerson finally traveled to Kenya for the first time with Fielder, and they met a dozen of the HIV patients whose lives they saved over a decade ago. Fielder, who worked in Malawi for some years before moving back to Kenya where he lives now, hadn’t seen many of them since that time. One woman from the group of survivors came up to him and referred to him as “Fielder-wetu,” or “our Fielder” in Swahili, which made the experienced doctor break down and cry.

“I learned the Torah, the Old Testament, commands us to love the stranger more than 36 times,” said Gerson, the fastest-talking New Yorker you’ll meet. “But I learned what it meant by watching the Christian medical missionaries in Africa recruiting the disabled. That’s what it means.”

Gerson and Fielder were college roommates and close friends at Williams College in Massachusetts. Even as an 18-year-old, Gerson admired Fielder’s “moral seriousness” and looked up to him. Jason Poling, a friend of Gerson’s and Fielder’s at college, is now the pastor of New Hope Community Church in Baltimore, Md., and recalled how at Williams the three of them would discuss current events and conservative policy.

“We were the only ones on campus reading First Things,” said Poling. When they were in college, Gerson would always volunteer to pick up lecturers from the airport in Albany, N.Y., so he could have the hour drive to pick their brains. In the course of writing a 700-page senior thesis on the intellectual history of neoconservatism, Gerson read every back issue of Commentary, according to Poling.

Gerson and a college professor from Williams, Don Carlson (who places himself at the “opposite end of the political spectrum” from Gerson), developed a close friendship. Fielder and Gerson would enroll in his classes “to show that they could take on the resident Bolshevik,” Carlson said. For many years afterward Carlson and Gerson would have a monthly breakfast at the Yale Club. 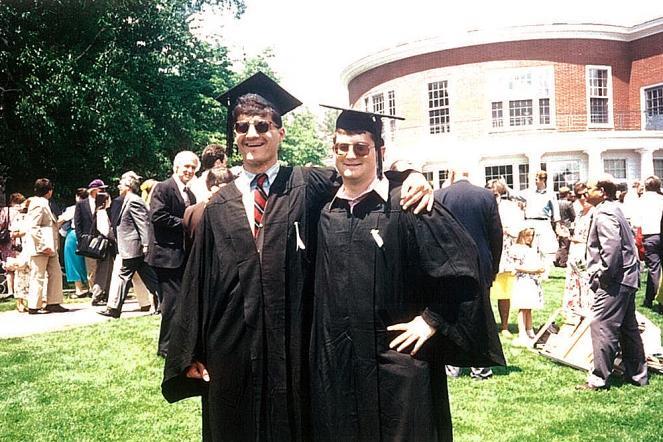 Upon graduation, Gerson had a spot at Yale Law School but deferred for a year to teach. A Catholic school in Jersey City, serving largely minority students, offered him a job teaching American history to 10th-graders. The school gave him Jewish holidays off, and he in turn took the students to church services connected with the school.

“I started to develop such great respect and affection for the Christian faith,” said Gerson. “If the kid went to church a lot, he or she would never be a problem in the class.”

After the year of teaching, he attended and graduated Yale Law, then immediately started his first business. Gerson has several ventures, but his main enterprise that he helped start is the Gerson Lehrman Group, which connects investors with experts in whatever field they are seeking. GLG now has 22 offices around the world and 1,200 employees.

In 2010, Fielder and Gerson started an organization called African Mission Healthcare Foundation (AMHF) that supports Christian medical missions. The foundation asks mission hospitals for their needs and then seeks ways to fill them, buying a piece of equipment, setting up a matching grant, or funding the education of African medical staff.

AMHF awarded the first $500,000 Gerson L’Chaim prize this fall to a young Christian surgeon in Burundi, Dr. Jason Fader. Fader and his family are missionaries at the rural Kibuye Hope Hospital through Serge, formerly known as World Harvest Mission. Fader, one of only 13 surgeons in the country of 10 million, will use the funds to add beds at the hospital, to expand the hospital’s lower-limb fracture care (essential where people travel on foot), and to create the country’s first postgraduate medical training program.

Gerson spends time every day working on AMHF, where he is the chairman. He also chairs United Hatzalah, an Israeli nonprofit that does motorcycle ambulance service to victims of terrorist attacks. The Gersons don’t think they give in a way that feels sacrificial. As we ate dinner on the Upper West Side, he pointed at the paved Manhattan street outside and said, “Those are our roads”—to emphasize the prosperity that surrounds Americans.

AMHF provides a critical link between Western Christian donors and the needs at remote mission hospitals. Those hospitals are still a critical part of healthcare infrastructure in Africa, but Western donors might not continue support when a particular missionary they know leaves a hospital. 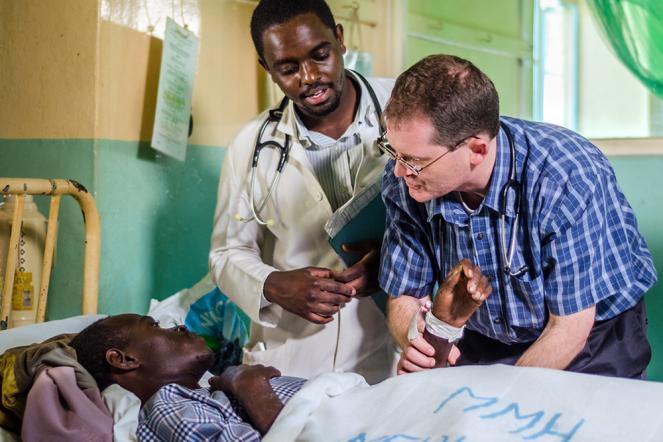 Historically, many mission hospitals also had relationships with American denominations. Now as mainline churches are withering and nondenominational churches are growing, hospitals have a harder time making that connection for consistent support. AMHF vets and fills hospitals’ needs when support falls short.

The SIM Doro Clinic in South Sudan receives support from AMHF. The rural clinic sits close enough to the Sudanese border and conflict there that the staff can hear bombs dropping. One boy in the clinic now has shrapnel in his back from a bomb that missed its target and killed his sister. The SIM clinic has been there since 1938, sometimes closing during conflicts. A graveyard of missionaries stands near the seven-building complex.

The Doro clinic was for a long time the only clinic in the area; but a few years ago refugees flooded in, and other NGOs like Samaritan’s Purse and Doctors Without Borders arrived to help. The SIM clinic still serves 35,000 patients a year and raises its own funds.

Cathy Hoelzer, the head of the clinic and a Christian, has worked in mission hospitals in extreme places for three decades—places like Iraq, Afghanistan, and now Sudan. She and her husband have been in rural South Sudan for about 11 years, and she became head of the clinic a few years ago when one doctor left.

The fundraising responsibilities for the clinic fell to her, and she was anxious because AMHF had a relationship with the previous doctor. Perhaps without that point of contact, the support would end, she thought. But the foundation’s support continued, and Fielder encouraged her. Hoelzer values Fielder’s friendship and advice even more than the money AMHF provides.

“It doesn’t frighten us,” Hoelzer said of working in South Sudan. But, “it’s really hard. ... I don’t know if we could continue what we’re doing if [Fielder] wasn’t a support to me—and I really mean that.”

When we spoke, Fielder had just heard from his contacts in South Sudan about a malaria outbreak, and clinics were overwhelmed. In those situations, he approves funds and logistics for flying drugs into those areas as needed. Now managing operations at AMHF, Fielder has less time with patients himself, and sometimes feels that he is missing out when he hears about the direct help other doctors are rendering.

“But you know Mark Gerson,” his wife Amanda reminds him.

The elite Manhattan philanthropy trend of giving to operas, museums, and universities has not tempted the Gersons. Mark thinks that any nonprofit that has winsome spokespersons will have sufficient funding, and operas and ballets will always have winsome spokespersons. African children with disabilities might not.

The Gersons have cachet—their wedding appeared in the pages of The New York Times—but they say they aren’t Manhattan socialites. Mark is approachable and endlessly seeking to meet new people and connect others. Erica stays with the kids mostly, and they save the weekends for family time and big Shabbat dinners.

At those dinners you might find evangelicals, Democrats, or Republicans. As Erica discussed growing up across from a pawnshop and crack house on the Upper West Side, Gerson said, “God bless Rudy Giuliani.” Gerson donated to his Yale Law schoolmate Sen. Cory Booker, D-N.J., and Erica was one of the officiants at the wedding of Booker’s chief of staff. Meanwhile, Mark continues to be a salesman for Christian medical missions and AMHF. Booker donated to support the work of an AMHF-supported missionary doctor, Tom Catena, in a violent region of Sudan. The week we talked, Gerson was preparing to fly to Los Angeles to talk to another potential donor to AMHF.

“It takes years to go through New York or Silicon Valley or Nashville or Houston and develop the relationships to get people comfortable,” Mark said. “You can’t do it when you’re here for one month every three years,” he said about missionaries.

“How do you solve that?” Erica asked him.

UPDATE: As 2016 came to a close, SIM had to evacuate its workers from the clinic in Doro, South Sudan, when fighting broke out near the missions compound.

Shabbat at the Gersons

Every Shabbat, the Gersons have their four children practice giving. The parents ask them to give away half of their allowance for the week. The family goes on the site Watsi.org, which crowd-funds medical procedures for specific patients who are often at missions hospitals. The children pick out a project to fund, and the parents match what their children give 10-to-1. Their 3-year-old gives all her money.

Mark was recently doing a Torah lesson with his children about the “immediate” payment of obligations to God. He looked at Genesis 18:1-6 and noticed that when Abraham found three strangers in his home, he “ran” to greet them and “rushed” to Sarah’s tent, where he told her to “quickly” make them bread.

For Gerson the lesson is people must do righteous deeds immediately, without hesitation. The first time Mark realized he could be a philanthropist was just after he graduated law school, when he had started his business. A rabbi he knew asked him to give $720 toward a project.